So much of this hobby and industry is driven by nostalgia. It’s that unexplainable emotion that takes you back to a time that is easy to romanticize. It’s why so many of us, when we finally reach adulthood, spend a lot of our money attempting to buy back our childhood. It seems like the comic market is no different. Kids who grew up in the 80s want GI Joe and Transformers, while kids from the 90s love Spawn and Power Rangers.

This sentiment has existed in the hobby for years. This week, Hollywood will try to tap into that nostalgia with a major film and a show release. Today, Snake Eyes hits theaters and Masters of The Universe: Revelation lands on Netflix. We already addressed some Snake Eyes books to be on the lookout for, but since I imagine a lot of you will be indulging in some He Man this weekend, it felt only right to bring you to Eternia for a top 5 Masters of The Universe books to look out for. 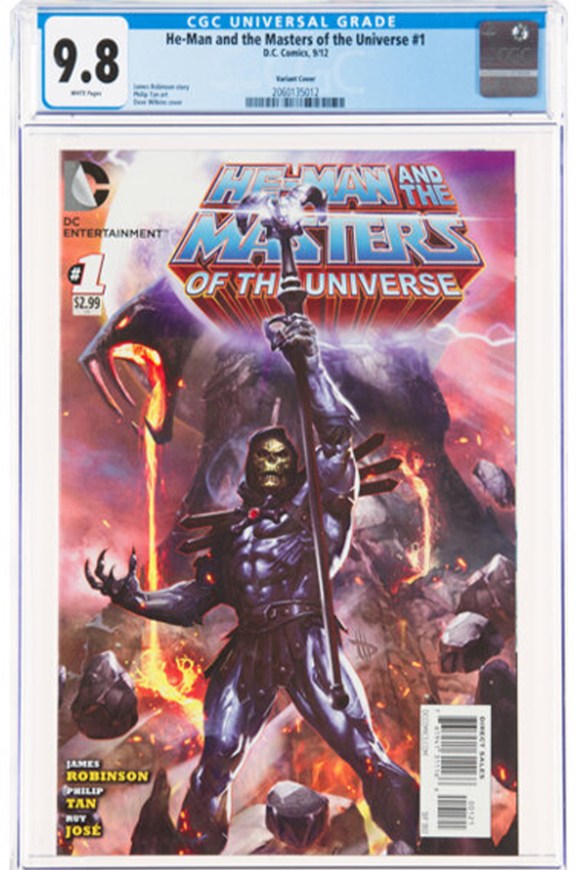 This is “THE” variant to get for MOTU collectors. Yes, there are some other valuable modern variants, but this is the grail for many MOTU fans. Skeletor covers always seem to perform better than covers featuring He Man, and this cover is a prime example of that trend. Wilkins is also an iconic artist who has stepped away from doing comic art over the last several years—minus a few exceptions.

One of those exceptions is a return to MOTU with a brand new cover for Dark Horse Comics new series by Kevin Smith to go alongside the Netflix Series. Wilkins provided art for a Revelation Exclusive Variant from Wanted Comix. If the $600 that the 2021 book commands on the open market is too rich for your blood, you can still grab the Wanted Comix Variant for $21.95 on their site. 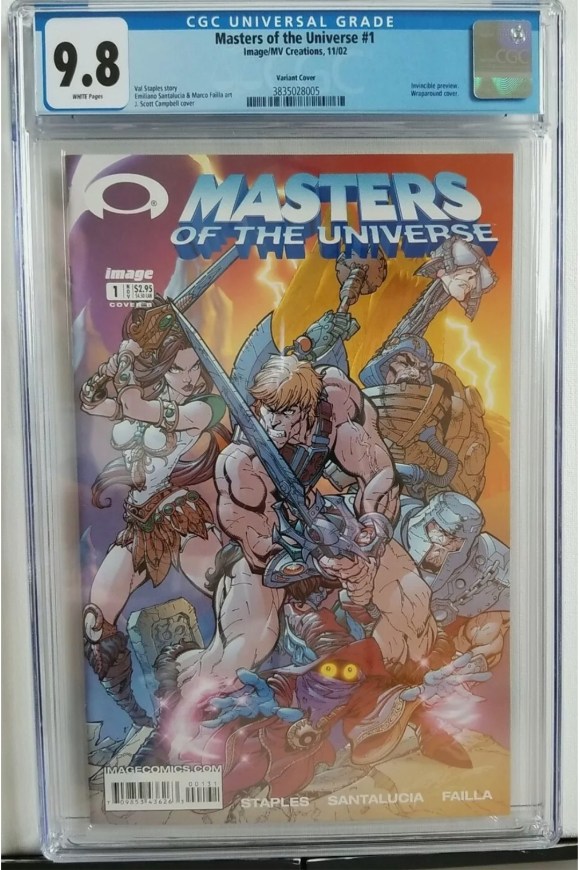 Masters of The Universe has a storied publishing history, having been published by DC Comics, Marvel, Image and Dark Horse over the years. This #1 issue from their IDW run was the forgotten child among #1 issues for many years, but that is largely changing.

There are two main things this book has going for it: an awesome early cover from cover art superstar J. Scott Campbell and a preview of an upcoming Image series featured in the back of the book. That series was the smash hit and new Amazon Prime animated series Invincible. While that preview may have nothing to do with MOTU, it is an appearance of Invincible that predates Invincible #1.

For those reasons alone, I expect collectors to continue to seek out high grade copies of this book. It is the most affordable on this list and not one to sleep on. 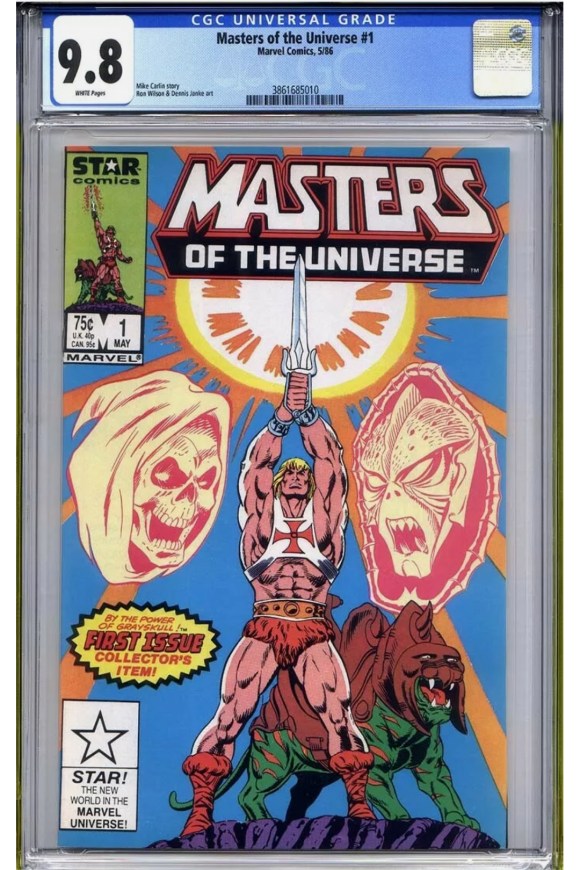 While not the first Masters of The Universe #1 to exist on the market, this is possibly the most popular as it kicked off the iconic MOTU Marvel run that spanned 12 issues and is a centerpiece for MOTU comic collectors.

Star Comics was an imprint of Marvel that focused on properties that were geared toward a younger audience—such as Alf, Care Bears, Kid and Play and Muppet Babies. Among those series sits this 80s classic, which remains the one piece of Star IP in demand today. 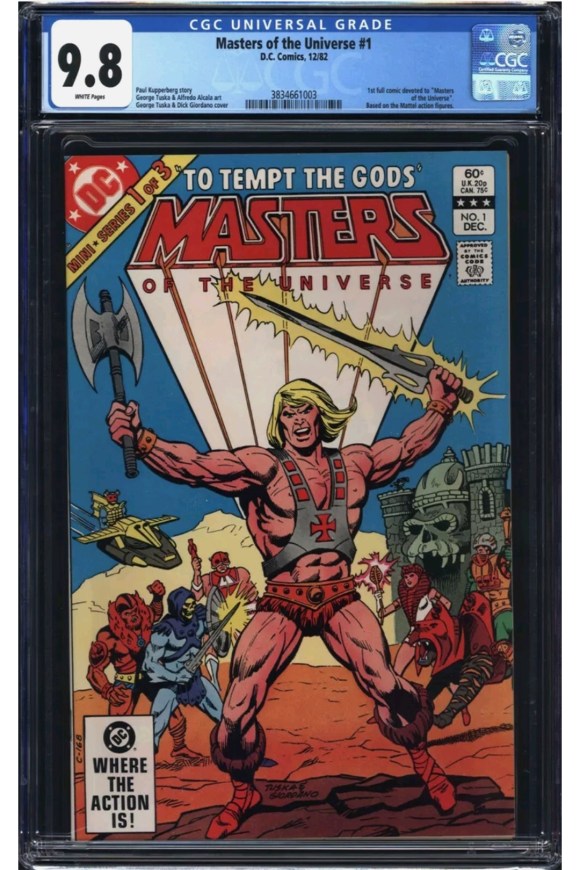 As I mentioned earlier, there was a previous #1 issue for MOTU collectors to chase, and that is this one right here from DC Comics. DC was a part of the creative force that brought us the initial story elements that gave life to this iconic toy line.

While the 1986 Marvel counterpart lasted 12 issues, this mini series lasted just three, but can be extremely tough to find in the wild these days. Combine the reignited fandom of this IP with the fact that these comics were essentially published as a compendium for kids who were playing with the toys; collectability of the comics themselves was a bit of a secondary thought, if one at all. Hard grade copies can be tough to find and prices of this issue have been rising in recent months. 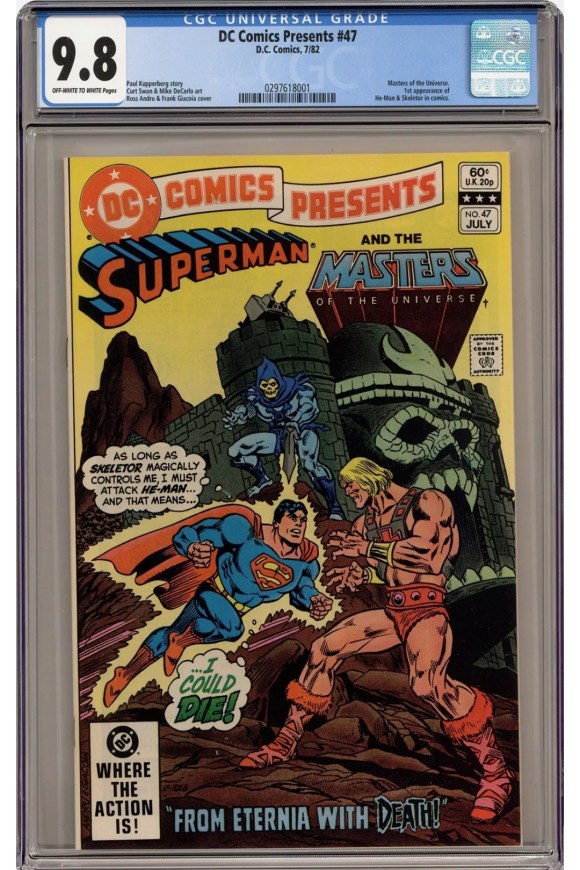 The no-brainer number one entry on this list is this issue from the popular DC anthology series, DC Presents. This series was used to showcase one-off stories, often pairing up unlikely characters or spotlighting unheralded ones. This issue does both as it features Superman and He Man. The issue gives us the first comic appearance of He Man as well as Skeletor.

This issue was originally used to build awareness for the toy line and has always been popular with collectors. For years you could find copies in the wild ranging from $15-25, but those days are becoming a distant memory as Masters Of The Universe: Revelation excitement has sent this one skyrocketing with raw copies selling for a couple hundred and a 9.8 costing over $2k.

I still think this is a book with meat on its bones. Will there be a live action film at some point? Is this just the beginning of MOTU’s return to prominence? Time will tell, but I am banking on nostalgia. I love investing in these properties. When people shop for items they are nostalgic for, price often becomes a secondary factor and when that happens, there is usually some ROI to be made.

I am loving writing my weekly columns here at ONE37pm! Bringing comics and comic book investing to a new audience is my passion. With that in mind, catch me next weekend in Chicago for the National Sports Card Convention where I will be hosting CBCS Live from the main stage of the convention bringing comics to NSCC.