As I teased in last week’s column, the title we will focus on this week is one that has been dubbed “The Next Walking Dead” by the comic community almost since its arrival on the scene two years ago.  A lot of books draw you in off the rack with their awesome covers; this one does too, but it isn’t the art that first draws you in, it’s the sensational title: Something Is Killing The Children. Usually, when the stakes involve the death of children, the hero saves the day and after a while you become desensitized to the danger.  That is pretty common among Marvel or DC titles. But with this title, you know right off the bat there has already been loss. Whether you were intrigued by the title or offended by it, either way you didn’t forget it. 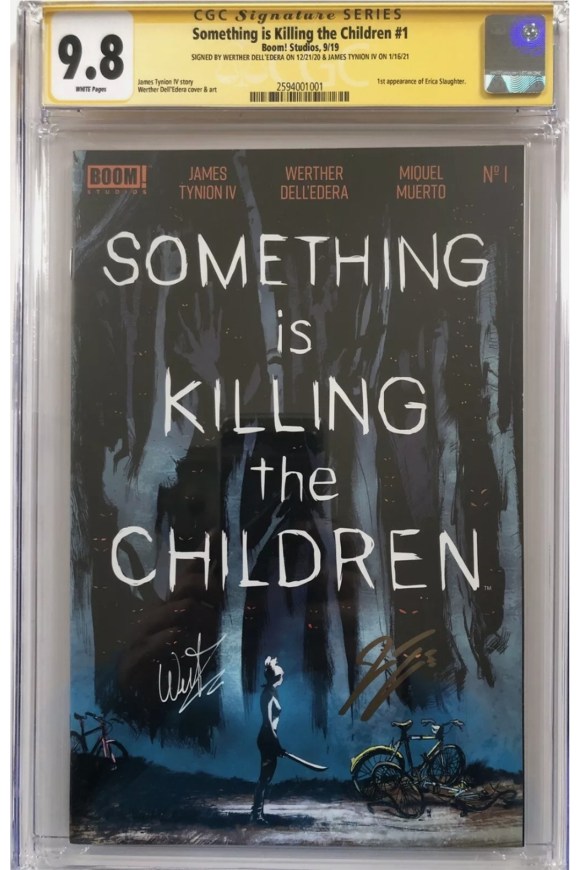 Something is Killing the Children / Boom! Studios

From the moment I read an advance PDF of issue #1, I was hooked both as a reader and an investor. This title was a major pre order play for me. I was championing this title before its order cutoff window with Brian Wood, on his popular YouTube Channel Simplemans Comics. While many jumped on board, some were still skeptical.  That sentiment seemed to dissipate in the weeks and months after the release of Issue #1. It seemed like absolutely anyone who read it loved it and instantly became a buyer. Copies dried up and now we are on the 8th printing of #1. Every issue printed in the series thus far has seen secondary market demand with some variants hitting 4 figures due to scarcity and demand alone.

While this series has truly been a phenomenon largely due to the efforts of writer James Tynion (whom I previously wrote about being an extremely investable writer) and the marketing efforts of publisher Boom! Studios, the secret sauce has been the likability of the main character Erica Slaughter. Erica is a badass, take no prisoners female lead. A woman on a mission.  As the story unfolds we get to see more of what drives her. This character seems like the type of role that would really propel an actress to new heights.  And this brings us to option talk.  While there haven’t been any concrete rumors swirling around, this series being optioned to Hollywood has felt like an inevitability since day one.  Netflix has a first look deal with Boom! Studios and I would find it hard to believe they would pass on this IP, but I am no Hollywood exec, so we will see.

Regardless of who produces the series into a TV show or movie, the popularity of the comic proves there is a market here. When I first reported on this book for this site, prices on 9.8 copies of Cover A were $650. Now we are seeing these trend upward hitting above $900 in just a matter of weeks. I have seen so many comic investors selling at these high prices, but I am holding. We haven’t gotten that Hollywood announcement yet that always drives price increases and I am willing to hold out for that at the very least.  This is one property I really believe in.

The Walking Dead’s Clementine to Make Her Comic Debut 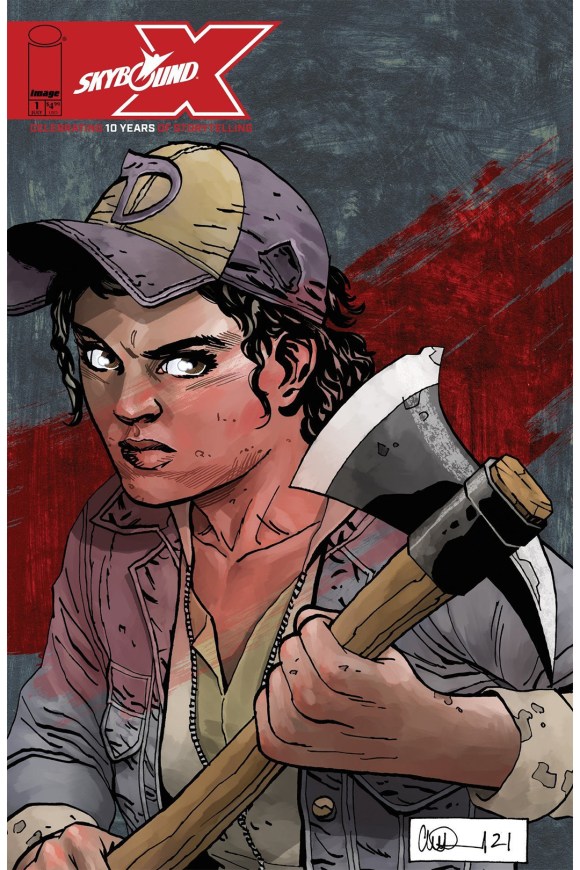 If you’re looking for the next The Walking Dead, check out what’s next up for the original! One of the most popular characters in The Walking Dead Universe is a character who hasn’t been on the big screen for the last decade, nor did she ever appear in the comic series. I am of course referring to the popular video game protagonist Clementine. Skybound Entertainment recently announced the launch of Skybound X, a new series celebrating Skybound’s 10th anniversary, with issue #1  featuring the 1st appearance of Clementine in a comic book as well as two variant covers with her front and center.

This book launches in July and if you are a believer in The Walking Dead as a long term IP (I am!) then this is a great buying opportunity. This book is inside the pre order window so comic shops can order an unlimited amount until the final order cutoff date 23 days before the release of the book. Most shops give major discounts to pre order and some even offer 9.8 slab pre sales.  While there is a ton of money to be made in the back issue market, I love keeping an eye on the future and making a play in the pre order market as well.

A newer indie publisher I have long been a fan of is Miami, Florida’s Mad Cave Studios. This company really set itself apart upon entering the comic market by growing slowly and organically. They put an emphasis on quality of story and art as well as developing a community on social media. The company has been led by founder and writer of many Mad Caves hit series, Mark London. With titles like Knights of the Golden Sun, Stargazer, and Nottingham among others, Mad Cave has seen secondary market success largely due to their aforementioned quality of product as well as the short supply that comes with being a small press publisher fighting the uphill climb for market share.

It is my belief that publishers like this provide investment opportunities as Hollywood’s craze over comic book IP helps to level the publishing playfield. If a Mad Cave title was to pop beyond the comic communities reader buzz, the 2-10k print runs could not possibly support the demand and prices would skyrocket.  The first step toward that occurrence may have just occurred as Mad Cave announced an agreement with Echo Lake Entertainment to represent their IP in negotiations for film and television. I would look to secure some of their #1 issues before Echo Lake can make any deals on Mad Cave’s budding roster of IP.

I have often made the comparison between the sports card market and the comic book market, stating that the card market is 2-5 years ahead of the comic market but operates largely the same. To this effect, I was not surprised to see CGC’s announcement that they were increasing grading costs across the board as well as eliminating a tier and discount options. This is largely due to their backlog of grading and their recent expansion bringing in dozens of new employees and moving into new facilities. This move seems like a logical first step in the progression of the comic book market.

What I find truly interesting is the market sentiment on the news. While the sports card community took the PSA price increases largely in stride as part of the growth of the hobby, the comic community has really reignited the debate between the grading companies: CGC and the Beckett owned CBCS. I will be really interested to see if CGC has the type of market hold PSA does or if they are possibly more susceptible to losing market share as CBCS offers a cheaper, faster, and arguably better looking case as well as offering the added service of signature verification for your already signed and unwitnessed books. At the end of the day though, it will all come down to the reaction of the secondary market. Comic sellers will always prefer the slab that generates the most money. 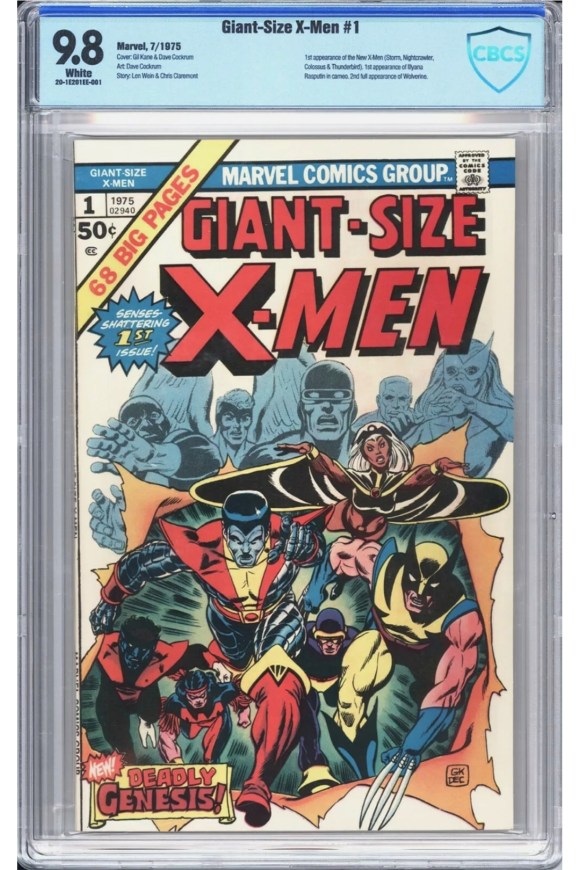 My next observation this week and is about the difference in returns from sales of a graded book from two different companies as well as the difference an auction platform can make. This past week two different 9.8 copies of Giant Sized X Men #1 sold at two different auction sites from two different grading companies, and they brought two different prices. A CGC 9.8 from ComicConnect sold for $60,000 while a CBCS 9.8 sold just a few days later on eBay for $49,100. This has raised a lot of interesting questions in the community such as: With the market being up as a whole, why did these books underperform a previous high sale?  What accounted for the price difference between the auction house or the grading company? Did the fact that the eBay copy ended a few days after the ComicConnect copy negatively affect its final price?

The truth is we don’t have the answers to those questions, only hunches and assumptions. As this market continues to grow, it will be interesting to note these trends and see which way things lean.   At the end of the day, those are two staggering totals that have most comic collectors excited for where the market is heading.

So join me next week where we take a look at what is almost assuredly going to be yet another action packed week in the comic book market.