Welcome to another week in comic book trading. The market is absolutely booming right now, and seemingly no matter what type of play interests you, there seems to be one to be made for every type of investor within the comic book market. This week I am going to talk about investing in writers, namely James Tynion. We are also going to talk about some big Keanu Reeves Netflix news, a comics/NFT update, and preview two of the hottest up and coming Marvel characters hitting Disney+.

One of the trends I have been following is the investability of writers with heat in the market. When one property pops, rising tides seem to lift all ships. In the modern era, dating back to the early 90s days of Todd McFarlane, Jim Lee, and Rob Liefeld, comic book writers and artists have had moments in time where they grabbed an audience and seemingly could do no wrong. I have noticed this trend the last few years providing many investable opportunities. One such writer in the middle of their moment is James Tynion.

Tynion seems to have the pulse of the reader, captivating audiences no matter the subject matter or publisher. He is the current writer of Batman for DC Comics, introducing one of the most dynamic characters to Gotham City in Punchline. I was skeptical of her debut as New characters are constantly thrown at readers, but the more I read, the more I saw her as a long term character. I feel like, while the comic community has already jumped on board and we have seen spikes, there is immense opportunity in her 1st Appearance in Year of The Villain: Hell Arisen #3. I think it’s a great buy at its current $350 eBay level. Wouldn’t you love to go back and grab Harley Quinn 1sts when they were only $350? (H.Q. sells for just shy of $3k currently)

On top of his work on Batman, Tynion is at the wheel of 3 major independent series at the moment. His most popular is Boom! Studios’ Something Is Killing The Children. This smash series is the secondary market Indie champion at the moment, with issue #1 Cover A trading hands at $650+ and rare variants hitting four figures. That is amazing for a yet optioned indie title less than two years old.

His other big hit is Department of Truth. This conspiracy theory driven Image Comics series is perfect for our times today and is a big hit with readers and collectors. 9.8’s can be had for about $160 and that is probably a steal just looking at the current market for Something’s Killing The Children. This book has already been optioned as The Hollywood Reporter reported in February. As we get more news on the upcoming TV series, I only see this one rising as it is already on a 4th printing of #1.

His third series is a bit of a sleeper with the all ages story Wynd. This book had largely been ignored by the secondary market amidst this run of Tynion success. The thing that makes this a buy for me is that it has solid reader and industry buzz and gives me major Harry Potter Vibes. I’m not gonna wait for some Hollywood announcement to get in when 9.8 Cover A’s are $50-60 and 1:25 Variants 9.8s are criminally underpriced at $100. This is a solid bet on the jockey not the horse type of play for me.

In a bit of an update from my first piece here at ONE37pm, I mentioned rumors surrounding an impending Hollywood announcement for BRZRKR. Well, that did not take long to come to fruition. This past week, Netflix announced that they had optioned BRZRKR not only for a live action feature film, but also as an anime series. This is unprecedented news for one piece of IP to be licensed by a platform for 2 different media releases in two different genres, with both starring comic co-writer and legit Hollywood A Lister Keanu Reeves. That is exactly why this book’s 600k print run is not intimidating. This is unprecedented grounds for Comic Book IP.

I made a Play myself this week, picking up several 1st Print Cover A copies raw hoping to slab some 9.8 candidates, and this week saw the release of the Foil variants. I had to grab a stack of those as well. I feel even better about the play this week as I did two weeks ago because, as predicted, media outlets primarily used Cover A cover art from Rafael Grampa as the image for their articles. That is exposure you can’t buy.  The market seems to also be gravitating toward the 1 per store variant which has a higher print run than the 1:1000 but is the next most limited of the general releases.

One thing I really want to do with my coverage here is to keep you updated on the comic industry foray into the NFT market. This week we got news of a unique NFT auction offering from Brzrkr co-writer Matt Kindt. Kindt wrote a hit series Mind MGMT from 2012-2105 for Dark Horse Comics (Publisher of Hellboy). The series was a big hit with Indie Comics fans, and Kindt announced he would be doing a one shot follow up issue with a bit of a catch. That catch being that the comic is only available via 1 of 1 NFT auction. Kindt says the highest bidder is welcome to do with the comic what they please, whether that’s redistribute, give away, read and delete, you name it. This is a similar model to the 1 of 1 Wu Tang album from a few years ago. It will be exciting to see what this one goes for on the open market. 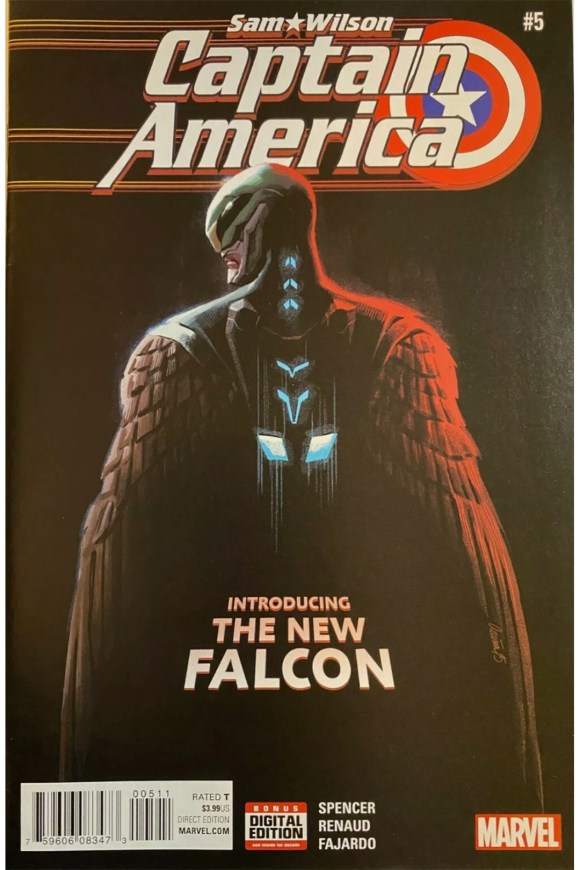 Two of the most talked about names among Marvel investors this week are Joaquin Torres and Maya Lopez. Torres made his MCU debut in the first episode of Falcon and Winter Soldier just last week. This is exciting for comics readers as they know Torres eventually takes the mantle of Falcon when Sam Wilson becomes Captain America in the comics. I really think we may just see that play out on screen within this series. There are not a lot of slabbed copies of Torres books on the market at the moment but Sam Wilson: Captain America #3 (Torres’ Cameo 1st Appearance) and issue #5 (His first full appearance and debut as Falcon) are trading for $30-75 raw. I see a lot of potential in that character in the long term of the MCU.

Lopez received a lot of buzz this week as it was reported that not only is Maya Lopez (aka Echo) the villain for the upcoming Jeremy Renner and Hailee Steinfeld led Hawkeye Disney + series, but that her own show is in development for the streaming service as well. This only adds to her investability by giving her at least two vehicles to launch prices of Daredevil #9 (vol.2 1999). This very well could make current market prices of  $800 for a 9.8 and $250-300 for a 9.6 seem paltry in just a few years. Also be on the lookout for the next issue (#10). This issue features her first Cover with beautiful art by David Mack and tells the origin story of Echo. This is a sleeper at $200 in a 9.8.

Join me next week when we talk about Comic investing sleeping giant DC Comics. There are so many major household name type of characters within the DC Universe sorely undervalued compared to their Marvel counterparts. Will the Snyder Cut success change that? Next week we’ll take a DC Comics deep dive.