When I was growing up, the kids around me traded Pokémon cards like they were candy. They cared about winning the game and not the potential financial value of the cards years later.

In the past year, the amount of media coverage around eye-popping Pokemon card sales has been off the charts, but many people still don’t understand what makes certain cards more valuable than others. Here, we will talk about factors such as eBay sales data, popularity of characters, card condition and the PSA grades and populations.

Below is a list of the 25 highest Pokémon single card sales of all time… but keep in mind, with new record breaking sales happening almost daily, you never know when a new card will show up or move up and down the chart. 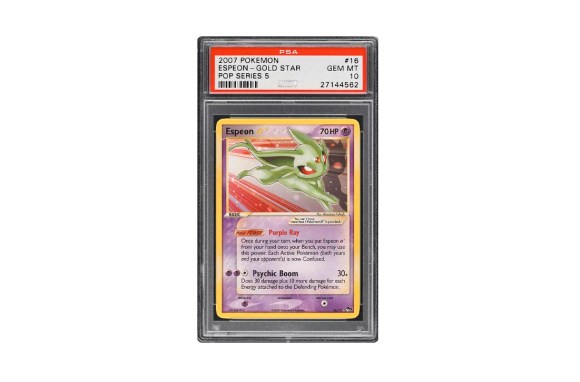 Let’s get this countdown started with Espeon. Note that at over $22k, there are 24 higher sales to learn about. Espeon boasts a population of 54 PSA 10’s and still commands over $22k at auction. Buckle up because here we go! 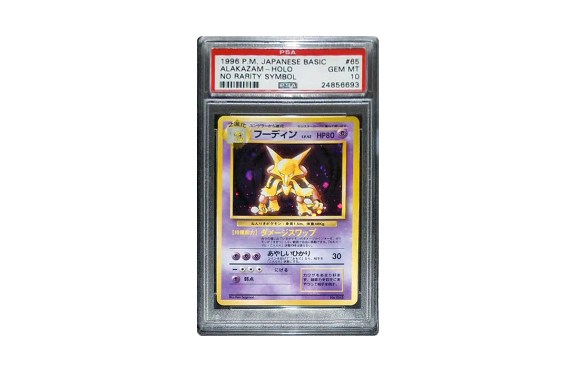 The No Rarity cards are considered 1st Editions when it comes to Japanese cards. Due to this correlation and Alakazam having a PSA 10 population of 4, you can see why this card sold for $22,100.00. With demand continuing to soar, anticipate the next Alakazam PSA 10 to shatter this sale. 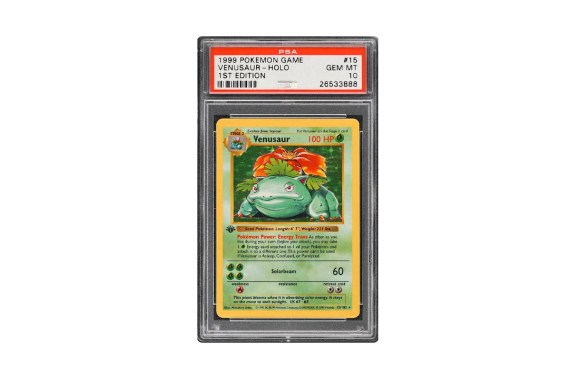 The first member of the Big 3 to hit the list, Venusaur is undervalued currently. Due to timing and a market slowdown, Venusaur is the first of 7 Base 1st Edition cards on this list, yet he should be no lower than 5th. Even with 136 PSA 10 examples, this is one of the top English cards to obtain. 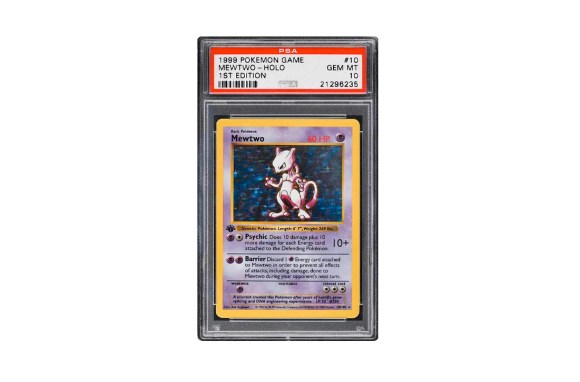 Possibly the coolest Pokémon ever, and certainly the most powerful, Mewtwo joins the club after this staggering $22,655.00 sale back in November. With a PSA 10 population of 81, finding the English grail Mewtwo will be a tough task. 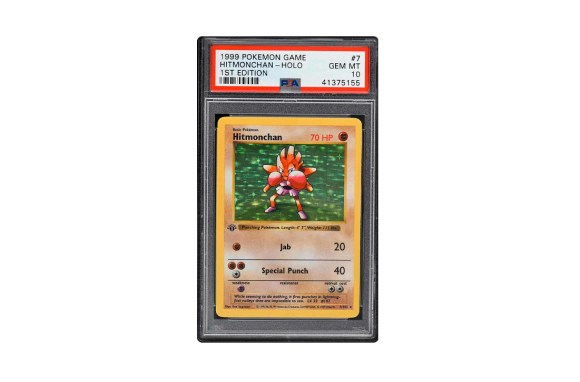 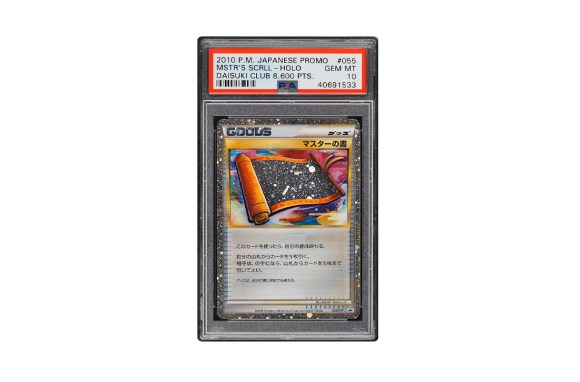 The newest card on the list comes with by far the most interesting storyline. This Promo card was only obtainable for members of the Daisuki Club, who had to complete a variety of tasks to gain the points necessary to redeem the card. Of the cards redeemed, only 26 are graded PSA 10. 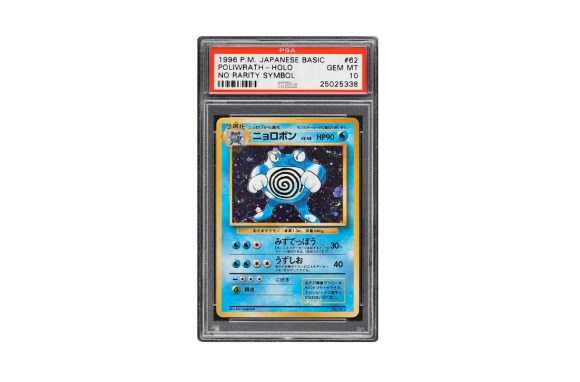 The 1996 No Rarity PSA 10’s have become extremely difficult to obtain, with low populations like Poliwrath here having a Pop 3 in PSA 10, for example. Prices will continue to rise due to such a limited supply of pristine original cards. 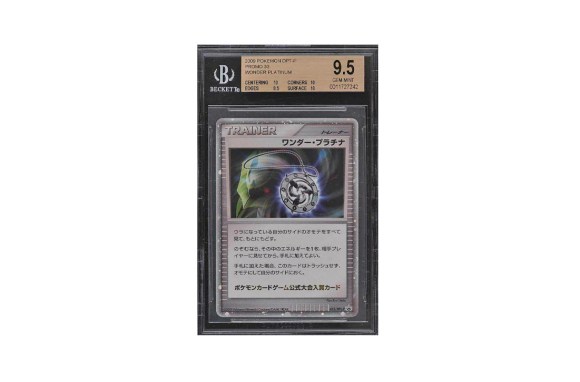 One of the newer cards on the list, the Promo Wonder Platinum Trophy Card is also one of the hardest to acquire. They were awarded to finalists at the Pokémon National Championships in Tokyo, with an estimation of around 20 being handed to those participants. This 9.5 BGS Trophy Card is a rare grail worthy of its spot on the list. 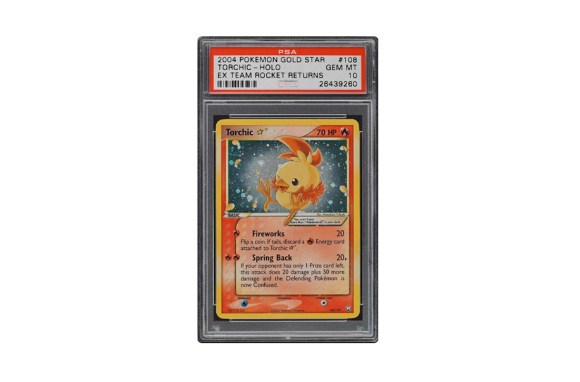 This might come as a surprise to some, but the Gold Star Torchic is in high demand, in part due to there only being 16 PSA 10 examples currently. How hard is Torchic to obtain? This is the only public PSA 10 sale in almost 2 years. 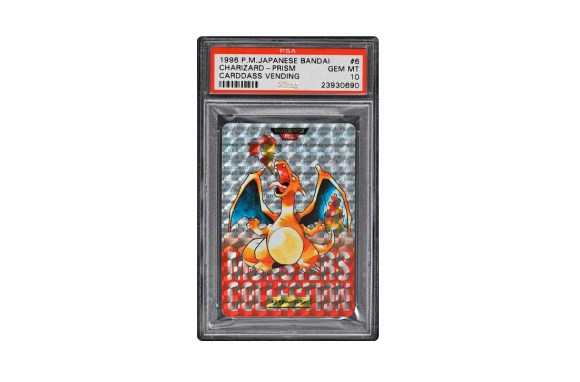 This is the first Charizard to hit the list. There are 61 Carddass PSA 10 ‘Zards currently, and 303 total graded with PSA. Due to scarcity, this ‘Zard could be higher on the list in a couple months. 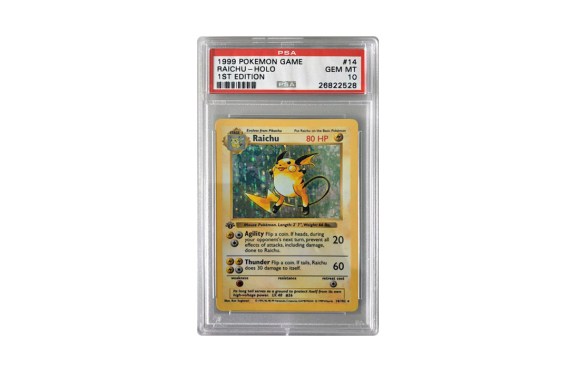 The evolution of Pikachu, Raichu cracks #15 on the list of all time Pokémon Card Sales. The Raichu PSA 10 1st Edition has a population of 87 currently, and with the prices of sealed Pokémon 1st Edition packs and boxes continuing to soar, the sale price of $34,820.00 will likely be a bargain in the near future. 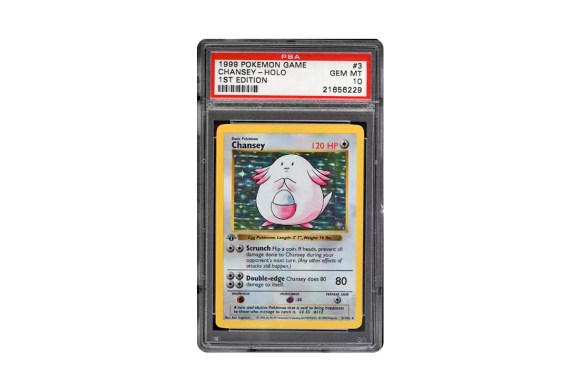 Certain Pokémon cards just didn’t come out pristine when they were produced and Chansey is a perfect example. With 47 PSA 10 examples, Chansey has the lowest PSA 10 pop of the hologram’s in the 1st Edition English Base Set. Coincidentally the Shadowless version of Chansey only has 15 PSA 10’s in the registry. 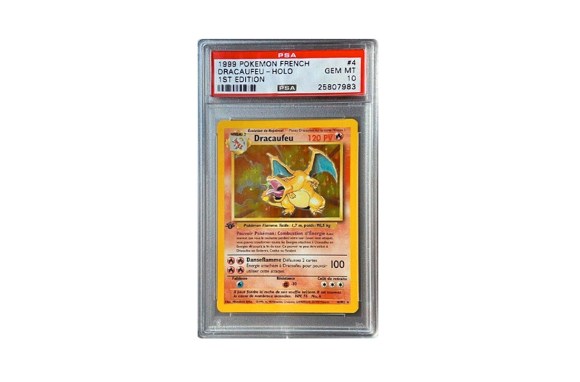 Due to surging demand for all Charizards, it makes sense that even the French Charizard would soar in value as well. With a population of 28 PSA 10’s, the $37,300.00 price tag isn’t as steep as you’d expect. Moving forward, low population Charizard’s are as safe a bet as you can make when buying cardboard, regardless of the language. 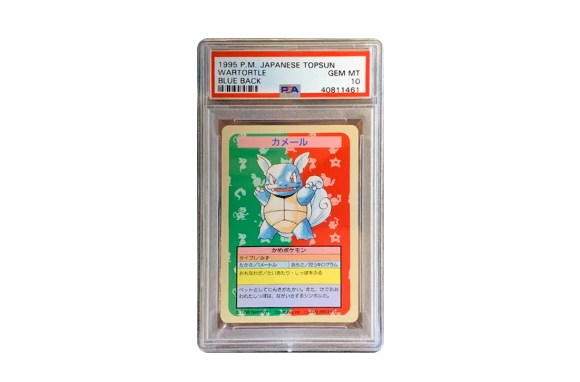 When it comes to Population 1, prices can soar. At nearly $45,000.00, this is going to be considered a bargain for the buyer, given no more PSA 10’s enter the registry. Cards like this will cause many collectors to go nuts trying to acquire such a rare piece of Pokémon history. 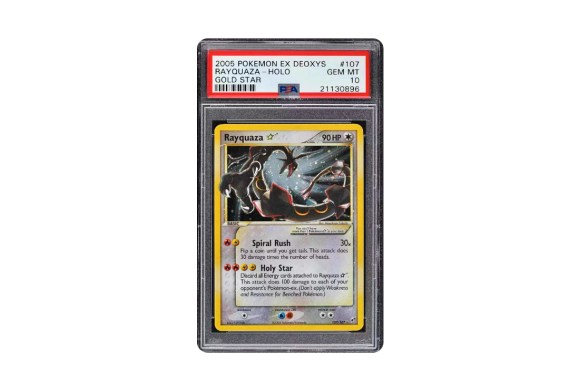 The 2005 Gold Star Holo Rayquaza has become quite the grail, with 46 PSA 10’s in the registry, and 156 PSA 9’s, this is going to be a tough card to acquire in mint or better for collectors. 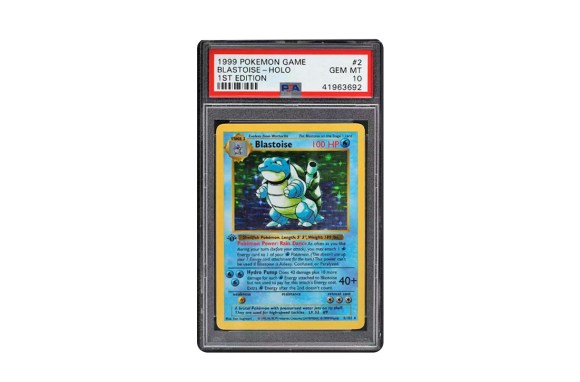 The drop off from Charizard to Blastoise is staggering, but make no mistake, Blastoise is entrenched as the 2nd most valuable 1st Edition card. Scarcity also plays a part with 100 total PSA 10’s in the registry, which is 21 less than Charizard. 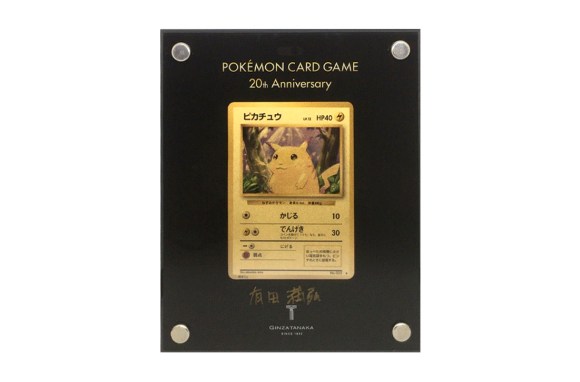 Pikachu encrusted in 24K Gold. Sometimes going over the top is necessary for anniversaries, especially when it involves Pokémon. To originally obtain this reissued Pikachu, you had to pre-order it for $2,100.00. Quite the return in 5 years. 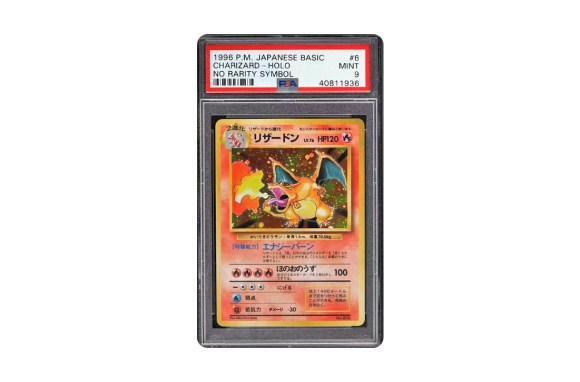 The 1996 Japanese No rarity ‘Zard has taken off, and rightfully so with a total of 28 PSA 9 grades in their registry. A PSA 10, which there are 6 of, would fetch a mega haul at auction. The price tag should be north of a PSA 10 1st Edition English ‘Zard due to scarcity and the fact that it’s the first Base Charizard Produced. 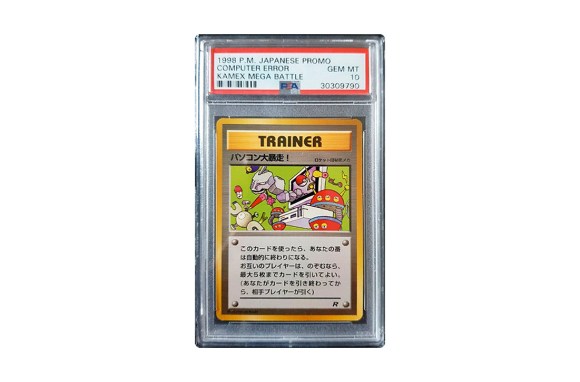 One of the Rarest Trophy cards, the Computer Error Trophy has a PSA 10 Pop of 6 with 39 total in their registry. The trophy cards were used as prizes at the 1998 Kamex Mega Battle. 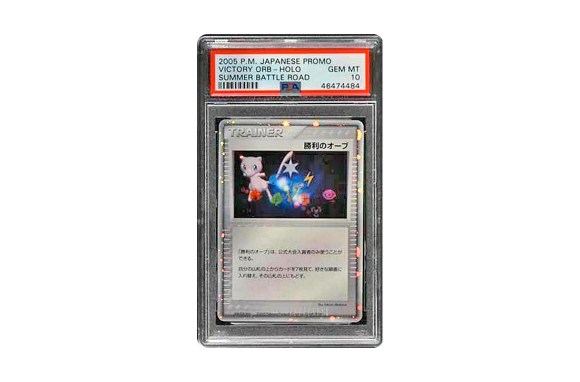 In 2005, 162 finalists won this Mew Trophy Card. Of those, 19 have been graded with PSA and 17 are PSA 10’s. Trophy Cards have become one of the most sought after promos, and for good reason. Only a true Pokémon Master could originally obtain it. 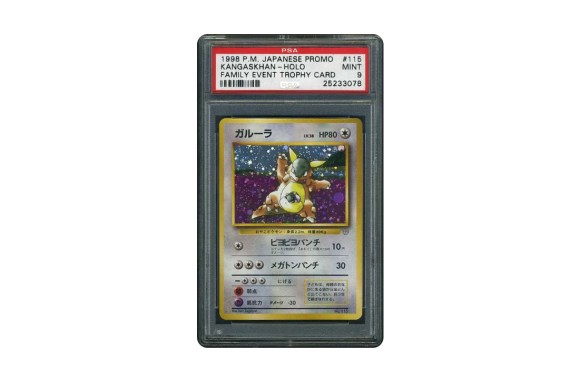 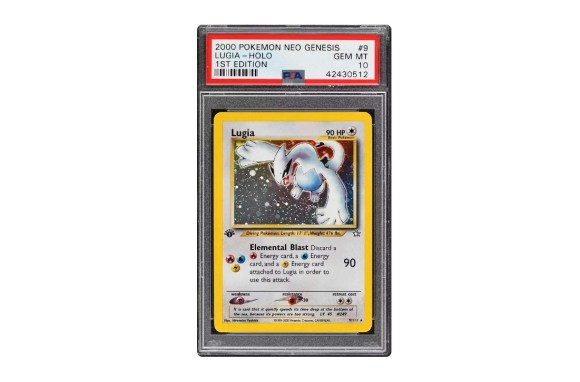 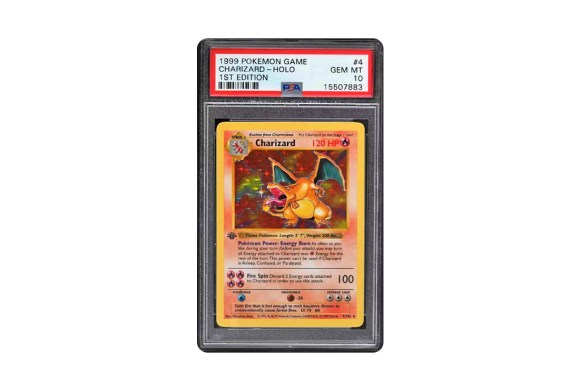 Even with a Population over 120, the PSA 10 Charizard commands heavy $. Consider this, Michael Jordan’s PSA 10 fleer Rookie is valued over $650,000.00 meanwhile Charizard has almost a third the population while fetching half the price of MJ. You could say ‘Zard is the Jordan of Pokémon. 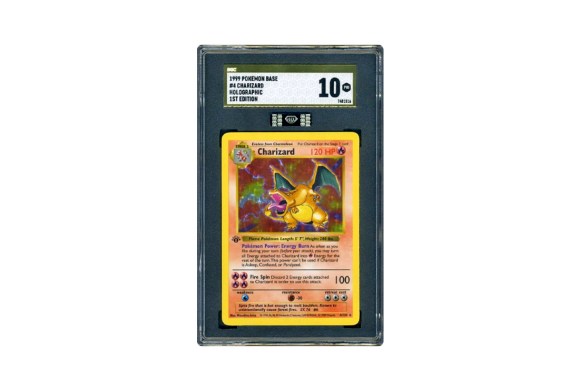 At number 2 comes this beautiful SGC 10 1st Edition Charizard. The 1st Edition Base ‘Zard is the top English card to own. 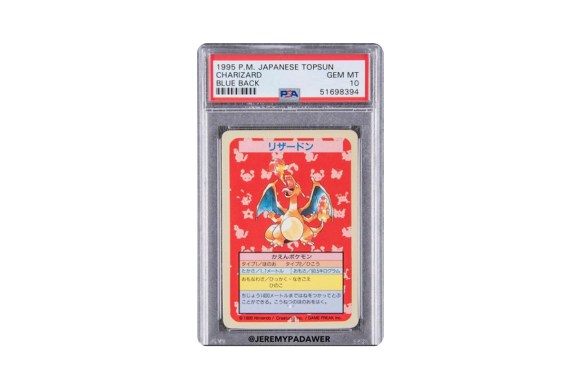 With a PSA 10 Population of one, it’s easy to see why the original Charizard fetched so much money at auction. While this is the top sale currently, it could be shattered before February ends.

5 Most Underrated Pokémon Cards You Can Easily Buy
‘Pokémon Red’ and ‘Blue’ Came Out 20 Years Ago on Game Boy: What Is Your Best Memory of Playing Them?
9 of the Most Popular (and Valuable) Modern Sports Cards