When you’re talking about a television show, the words “Who is this for?” is probably not a great sign for the future of that program. In the case of Halo, it’s a question I kept asking myself as I watched the first two episodes of the adaptation of the beloved video game franchise.

However, it’s not the worst thing since Halo is trying to please longtime fans of the games and introduce the universe to a general audience at the same time.

The games follow the adventures of John-117, the Master Chief, a genetically enhanced super-soldier whose mission is to defend humanity from all threats. The majority of those threats have been the alien soldiers of the Covenant, who in the first three games sought to destroy humanity, no matter the cost.

Most of the games in the series revolve around Master Chief and his A.I. companion Cortana discovering and fighting the Covenant and other enemies on giant space structures known as the Halo rings. Master Chief saves the galaxy on multiple occasions, and that tradition continued in the latest entry in the series, Halo: Infinite.

After sitting in development hell for years, the franchise finally got its TV series, with Pablo Schreiber taking on the role of Master Chief.

Halo will follow the characters introduced in the series in a separate canon from the games’ storyline. Described as “an epic 26th-century conflict between humanity and an alien threat known as the Covenant. Halo will weave deeply drawn personal stories with action, adventure, and a richly imagined vision of the future.”

Jen Taylor reprises her role from the games as Cortana, the aforementioned Artificial Intelligence that accompanies Master Chief on his missions. Their relationship breaks down as Cortana devolves into madness as each game progresses, whether the TV show explores that storyline remains to be seen. 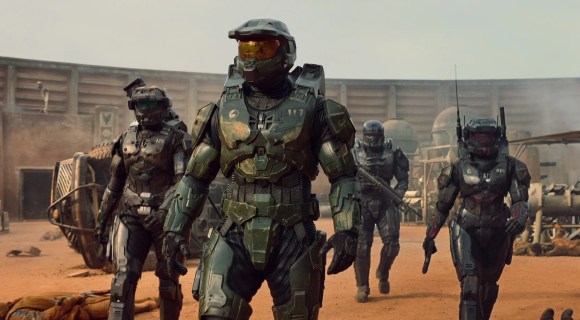 If there were one word I would use to describe the first two episodes of Halo, it would be: uneven. In the opening 20 minutes of the first episode, “Contact,” the Covenant unleashes an attack on a human colony of rebels who are at war with the UNSC (United Nations Space Command.) As the rebels are slaughtered, the Spartans led by Master Chief arrive to save the day.

The intense, surprisingly visceral action keeps your eyes glued to the screen. Master Chief is as great of a fighter as you’d expect, tearing through aliens left and right. While the violence is not quite on the level of Game of Thrones, viewers can expect quite a bit of blood and gore during battle scenes.

There are easter eggs abound in this sequence, everything from the classic sounds of Master Chief’s shield recharging to an Elite using his invisibility tech; there’s no doubt that Halo fans will crack a smile here. The action does switch to a first-person view for a few moments to try and give players the sense they’re back in the game, but it comes off very awkwardly and, thankfully, doesn’t last long.

Fans of the Halo games will likely take issue with some of the storyline decisions including one moment at the end of the first episode. It will, to put it lightly, have people talking.

Unfortunately, it is here where the story grinds to a crawl, as it is the only action setpiece in the first two episodes. Master Chief and silver team (the other three Spartans present) discover an artifact that gives John back some of his memories suppressed during his training.

This is an unfamiliar storyline from the games, and it cannot be stressed enough that the plot of the series is not following anything from the games. Familiar places will be present (the planet Reach, the Halo ring, and others), but this is a new storyline.

Master Chief trying to discover his humanity and break free of his robotic conditioning is an intriguing idea, presenting John with a moral conundrum that he has rarely faced before. He’s been used to carrying out orders without question, but now, when asked to do something particularly brutal, he goes against command. 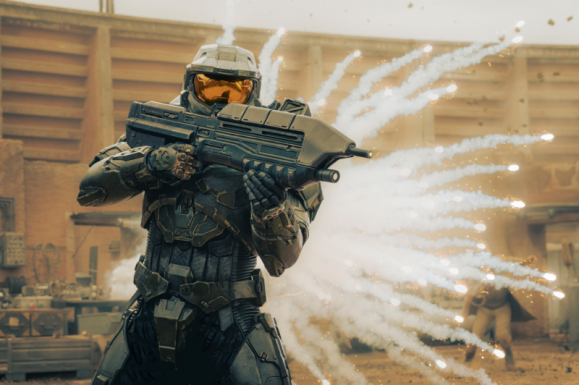 The artifact is key to finding a Halo ring and stopping the Covenant’s plans for human extinction. In the games, the Covenant is a theocracy of different alien races who wish to activate the Halo ring as a means of embarking on the “Great Journey.” Unfortunately, this journey will wipe out all life in the Galaxy.

It sounds like another “find the thing that will save the galaxy” plotline will be the focus, but the original Halo games were able to make that enjoyable by putting a new spin on it. Hopefully, the show’s writers (Kyle Killen and Steven Kane) are up to the task.

Schreiber will undoubtedly be a good Master Chief when the series ends, but speaking as someone who played the games, it will take some time to get used to his voice rather than Steve Downes. Of course, this is not the fault of Schreiber, but it will certainly be something fans notice almost immediately.

One particular scene in the second episode where Master Chief interrogates someone jumps to mind as a showcase of his talent. The prisoner knows something about the artifact and how it plays into John’s past. Schreiber is intense, and you can feel his fury come through as he demands to know what the prisoner knows; not only is he angry, but you can also tell he is confused and scared as well.

Playing Master Chief is no easy task, as he is, well, a relatively robotic human super-soldier that has been psychologically and physically broken down to be a one-man killing machine. Getting any sort of emotion out of a character like that will be a challenge, and Schreiber has succeeded thus far. His struggle with embracing what his uncertain future holds is painted on Schreiber’s face, and you know how scared he is of it.

Yerin Ha’s character seems to be the show’s other primary focus, playing the human rebel turned Master Chief companion, Kwan Ha. Yerin is a relative newcomer, with only a few acting credits to her name, but she plays off Schreiber well. She is a fish out of water attempting to fully grasp the fact that she is roaming the galaxy with a Spartan, someone responsible for the death of her mother.

Natascha McElhone, as Dr. Catherine Halsey, is the person responsible for the Spartan program and believes in them wholeheartedly. She wants to protect them at all costs, and in a scene that she shares with John, she scolds him for his actions since they could be perceived as a threat to her and the program. Halsey has a different agenda planned for John, and McElhone’s portrayal is one of the show’s strengths.

Noticeably missing from the show has been the iconic theme music of the franchise. Outside of a sampled version present in the intro as well as the end of one of the episodes, we don’t hear any of it.

Come on Paramount+, give the people what they want!

Hopefully, it plays into it at some point but for now, feels like a serious missed opportunity right now.

We’ve only dipped our toes into this version of Halo and there is plenty more to come. The show has had a decent start but has for every up it has had, it’s had plenty of noticeable downs.

There are eight episodes of Halo this season with a ton to explore, and we’ll definitely be along for the ride.

‘Halo’ premieres on Paramount+ on March 24th with new episodes dropping weekly on the streaming service.