Since the LEGO minifigure’s debut in 1978, over four billion LEGO Minifigures have been produced. For perspective, if LEGO minifigs lived in their own country (let’s call it “LEGOLAND,”) it would be the most populous country on Earth! With so many minifigs, surely some are rarer than others, so today, we’ll be taking a look at the top ten rarest LEGO Minifigures of all-time.

In determining which minifigs made this list, I decided to focus on those that are the hardest to come by, not necessarily the most valuable—although those factors often overlap. Value can change over time, especially if a rare figure is factored into a mass-produced set at a later date. Bearing those things in mind, for this list, I’m only looking at rare, one-off figures that were made once and have been sought after ever since. One additional rule: the figures have to have been attainable to the average person, so no LEGO employee exclusives, prototypes, or anything that never had a fair chance to be obtained by the general public and/or non-LEGO employees. Without further adieu, here are the rarest LEGO minifigures of all time:

When the Ultimate Collectors Series Millennium Falcon was released in 2017, those who bought the set early with their LEGO VIP card could be entered to win this ultra-rare 1 of 1 Solid 18k White Gold R2-D2. He comes encased in a beautiful display with a certificate of authenticity. It is one of the only LEGO figures ever made available to the public, a true “1 of 1 produced” piece.

At the 2010 San Diego comic con, two lucky attendees could win a framed LEGO Star Wars giveaway, which included three Boba Fett Minifigures. One was a white Boba Fett figure that was 1/10,000 made, and the other two figures were even rarer than that: a 1 of 2 14K gold Boba Fett and a 1 of 2 sterling silver Boba Fett. Talk about rare and valuable!

For the 30th anniversary of Star Wars, LEGO did a celebratory line of sets, which included some amazing promotions. This 14K gold C-3PO was raffled off and limited to just five pieces total, and given that limited production run, it’s always going to remain in the Top Ten list.

If you have an extra $1.2 million lying around, there’s one listed on eBay now…

Only 125 of these figures were produced, and they were the first official LEGO Marvel Minifigures ever made (if you don’t count the Tobey Maguire-era Spider-Man sets of the early 2000s). These two figures were given away at the 2012 Toy Fair in pairs of two, so finding one without the other is basically impossible. It’s difficult to find these figures for under $1,200, and even that would be a bargain!

In 2007, LEGO promoted where 10,000 gold-chrome C-3PO Minifigures were randomly inserted into various LEGO Star Wars sets. I remember being at Target as a kid and staring at every set, looking up and down in hopes for some hint on finding a box that might be a “winner.” Of course, like most kids, I had no such luck finding one in the wild. If you did find one, you could take home several hundred dollars for it now—especially if it’s still in its original baggie! Come to think of it; I have some sealed 2007 Star Wars sets in my collection now. I wonder…

Feel free to scroll through some current eBay listings to get an idea of the current value. 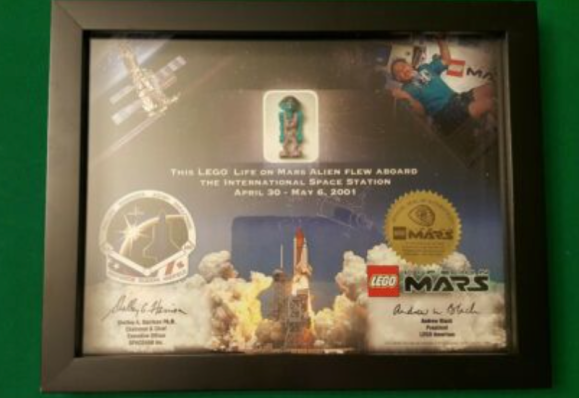 In 2001, LEGO partnered with NASA to send 300 alien Minifigures in a rocket to space and back. After a safe trip to and from the atmosphere, the figures were sealed off in a frame and given to some lucky recipients. I think this one deserves a spot on the list for two reasons: there are less than 300 out there, and IT WAS IN SPACE! There’s one available on eBay right now for a meager $10,000.

This Minifigure is rare because it is one of the few LEGO sports figures ever made outside of the NBA, NHL, Soccer, and X-Games themes from the early 2000s. This minifig was a giveaway for Red Sox game attendees in 1999, and while it’d be easy to remake as a custom, the real ones are very hard to come by. Imagine how easy it would have been to get this at the game and lose it by the time you got home! These are going for somewhere in the three-figure range on eBay.

8. Any SDCC or NYCC Exclusives

Starting in 2011, LEGO put out 1-4 exclusive Minifigures from Marvel, DC, TMNT, and more. Typically, these are figures that you can only get at comic con, but it’s not that simple. You must attend SDCC/NYCC, then enter a lottery for a chance to win the figure, and then, of course, you’d have to actually win! These limited edition Minifigures are highly sought after because, in most cases, the only way to get this specific version of a Minifigure is to obtain one of these holy grails—I’m looking at you, Andrew Garfield Spider-Man!

To celebrate the 10th series of Collectible Minifigures (CMFs for short) LEGO randomly inserted a gold-chromed character named Mr. Gold into 5,000 blind bags worldwide. This figure is highly sought after for completists and can go for upwards of $1,000. Not a bad ROI for a blind bag that would’ve cost about $4!

When LEGO Star Wars launched in 1999, geeks everywhere went nuts trying to collect every set they could. Of course, at first, the only sets available were from the Original Trilogy and The Phantom Menace, but in 2003, LEGO did a Cloud City set that included a Boba Fett with printing on his arms and legs. This figure has held up so well and looks incredible, and nearly 20 years after its release, you can expect to shell out several hundred just for this figure—never mind if you want the complete Cloud City set!