In a time when we are absolutely inundated with content of all kinds, at all times, in every corner of our digital lives, the only way to cut through the noise is to bring people into your world.

The cost and effort it takes to make art—of almost any medium—is decreasing by the day. Thus the way forward for artists is to construct their very own universe—the cohesive body of artwork, branding and social experiences that tell the story of the vast landscape of their imaginations.

This is nothing new to global superstar Marshmello.

Be it through his famous avatar anonymity, Fortnite live concerts in the metaverse, VR experiences or partnering with an innovative marshmallow brand in Stuffed Puffs—Marshmello has constantly navigated his career from the wise approach of creating his own universe, and inviting his fans to live in it.

We got a chance to sit down with Marshmello manager and CEO of The Shalizi Group, Moe Shalizi, to discuss the ins and outs of this new record, his perspective on the music industry in a post-pandemic world and the myriad of ways in which the multi-platinum artist continues to connect his world with fans as our lives move evermore online.

Marshmello’s fourth studio album Shockwave is dropping tonight at midnight across all streaming platforms. As expected from the global superstar, the 12-track record features a long list of heavyweight collaborators including Carnage, Megan Thee Stallion and Juicy J.

The EDM musician has also called on electronic heavy hitters in Eptic, Subtronics, PEEKABOO, and Sippy—rooting the LP in the music scenes Marshmello comes from.

Marshmello began this new era just a few weeks ago. The first single, Leave Before You Love Me featuring The Jonas Brothers, hit the internet on May 21st. Two days later, Marshmello and the Jonas Brothers performed the new song live at the 2021 Billboard Music Awards.

Keeping the momentum driving, the very next day they dropped the Leave Before You Love Me music video, featuring the artists performing on subways and rooftops around New York City.

Recognizing the speed at which our online lives now run, Marshmello and team wasted no time in continuing to deliver the goods. A week after the first single’s release, Marshmello hit us with Back In Time—a dance music cut featuring Carnage. The Back In Time visuals, which premiered the same day, take you through an animated vista of dozens of scenes both past and future oriented.

Just 4 days after Hitta’s release, Marshmello kept the singles coming with the 4th cut off the record—Bad Bitches featuring Megan Thee Stallion and Nitti Gritti. A club track through and through, the tune features samples of crowd banter from Megan Thee Stallion’s live shows.

With that came Marshmello’s official announcement of his fourth studio album, Shockwave.

To top it off, today Marshmello released the fifth single off the album with House Party, a collaboration with Subtronics.

Tonight at midnight, the album is out and available everywhere.

In just three weeks, Marshmello released 5 singles, each with visual support, culminating in a 12-track album. Not so long ago, such a flurry of art would get dripped out over a multiple month time span. But we got all this in less than a month.

“People have an appetite for music right now.” Marshmello’s manager Moe Shalizi explained their thought process to us behind going this heavy with releases out the gate for Shockwave.

“A lot of people have been holding off from releasing music through the pandemic because there’s been no tangible prize to it in a sense. Typically you put out a big single, you tour off the back of it… and you haven’t had that for the last two years. A lot of people have been holding back songs, albums, releases. The bad part about that is you lose that relevancy. So for us, we’ve been on a tear the last few weeks. It’s been a big rollout. We’re releasing at a much more frequent pace.”

Such is the state of our current music climate. Marshmello and team understand the quality and frequency of content it takes to send a shockwave through the online spaces in which we reside.

All the way online.

Marshmello is not new to having his finger on the pulse of what it means to build a digitally-native strategy. In February of 2019, Marshmello played the first ever live concert in Fortnite. It was the biggest event Fortnite had ever seen, with 10.7 million people tuning into the virtual performance. 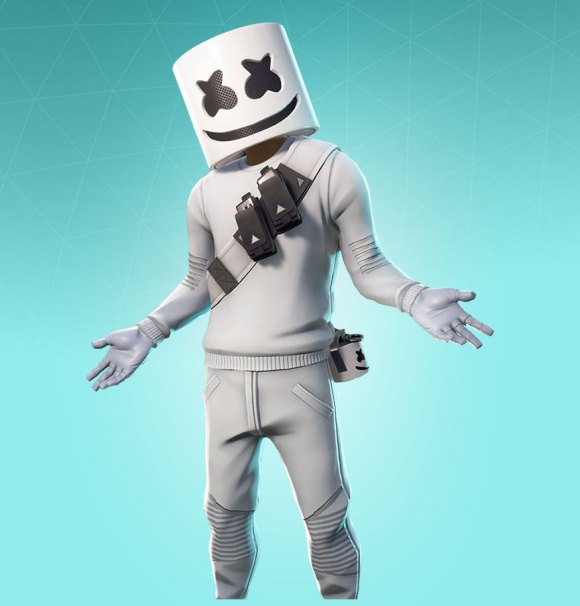 Over the last year and a bit, we’ve witnessed virtual performances go from a niche undertaking to an absolute necessity. But Marshmello has been well plugged into these digital worlds for quite some time already.

In July 2019, the EDM star released his third studio album Joytime III. Prior to its official release, he gave fans early access to the album via its own mobile game called Marshmello Virtual Dance. The official release then came with a 360º Virtual Experience—thirteen 360º VR music videos released on YouTube, through which you essentially got to visit Marshmello’s own virtual world.

Whether it be VR experiences, or Marshmello’s gaming and cooking shows on Youtube—the artist and his team are clearly well-versed in building digitally-native experiences that allow fans to fall directly into his universe. More and more it seems that their moves are almost prophetic, as our world moves ever more in the directions they are already playing in at a professional level.

The pandemic forced us indoors and online. That, along with the package of surfacing technologies known simply as web3, we are seeing an exponential lift in pseudonymous avatar identities (see cryptopunks), non-human artists, and digitally native artwork selling in the millions. Clearly, our digital universes are becoming much more important to us.

So what does this mean for an artist who’s been living and breathing this stuff way before most of us?

About a month ago, Marshmello announced his NFT debut, “Welcome To The Melloverse”. Partnering with art director Steve Messing and NFT platform Aito, the launch video teased a techno-dystopian world with Marshmello and the iconic mask at the center.

The announcement also shared that this would be “the first Defi-powered NFT ever”.

Marshmello was clearly approaching the sprouting NFT space from a digitally-native lense. Knowing that every artist is jumping into the space, Marshmello and team were taking a very fresh approach.

Instead of selling all of Marshmello’s NFTs flat out, the second NFT auction was run via a mechanism called staking. Instead of giving up their cryptocurrency for the NFT, the winning collector would be depositing their money into a protocol that earns interest. That interest goes to the artist, while the collector still maintains end control of their deposited funds.

In this way, both artist and collector earn something without taking on as much risk. In essence, it is akin to depositing your money into a high-yield savings account, and giving that yield to your favorite artist in support.

Marshmello’s manager Moe Shalizi told us about their unique perspective on NFTs, and how they thought about approaching Marshmello’s debut: “It’s a whole new mechanic to the space. Imagine if you can just park your money in a wallet that gives a return to the artist versus you. It’s a mutually beneficial thing for creators and fans.”

As Marshmello puts it, “I chose to work with Aito because it enables me to connect with fans in ways that were never possible before. DeFi empowers people and takes out the middleman which has always been the ethos of my brand.”

The top 50 bidders earned various perks, with the 1-of-1 piece coming with the following sweet add-ons:

On the future potential of NFTs, Moe said: “when the music industry really taps into it in real ways, then I think it could become something powerful.”

It’s still early, and with that comes the volatility of a space that is still finding its footing. But the Marshmello team is clearly thinking about this stuff in new and interesting ways, and we can envision a future in which more avenues to experience The Melloverse take shape.

The Marshmello brand has given a wealth of priority to building digital-first campaigns, and it’s paid off. The team understands what it takes to meet audiences where they are in 2021.

With that incredible brand equity, Marshmello has been able to successfully move into some very interesting non-traditional verticals—most notably… actual marshmallows. 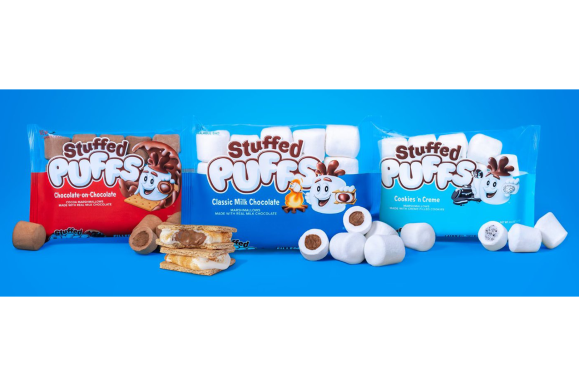 Stuffed Puffs is a chocolate-stuffed marshmallow brand created by Mike Tierney. Essentially, it makes making smores a whole lot easier, by baking the milk chocolate directly into the marshmallow beforehand.

As Tierney puts it, “it’s a simple idea, but very hard to execute… There’s a reason no one’s done it. It’s not because no one’s thought of it. It’s because it’s really, really hard to do.”

Though done it they have, growing to 2 facilities and employing nearly 200 people to date.

Marshmello partnered with Stuffed Puffs after Tierney cleverly hunted him and Moe down at a Forbes 30 Under 30 conference pre-launch.

The partnership was organic from the start, for obvious reasons. Both brands have marshmallows at the center, but Moe saw the strengths of the partnership even further: “[With Stuffed Puffs] you have innovation of a product category that hasn’t been innovated since the 50s or 60s.”

With an innovative product in Stuffed Puffs, and an audience of millions upon millions of fans across Marshmello’s socials—the two brands have both benefited greatly from the partnership.

“We’re excited about it because it’s our first case study in Marshmello putting his name behind a brand,” said Moe.
We can probably expect more from the Stuffed Puffs brand partnership, as well as potential future partnerships that Marshmello and Moe decide to undertake. Clearly, funneling well-aligned brands through the high-exposure content that Marshmello creates is a winning recipe.

With the release of Shockwave, we see Marshmello return to his dance music roots. Pointing us to where he comes from further highlights just how transcendent his brand has become—leaking into every pocket of our world.

“[He] put a marshmallow on his head and turned into one of the biggest icons in 5 years. He’s transcended into culture in so many different ways, from Fortnite, to all the different verticals in the hip hop world, there’s not a lot of other artists in our world that have been able to do that.”

Moe expressed just how important it is to build the artist’s universe, especially when such a big chunk of it can disappear in a split second.

“As a manager, your job is to create as many verticals for your client as possible. At the end of the day, if Mello wasn’t independent, if Mello didn’t have all these other streams of revenue during a pandemic, what could’ve happened? [You’ve got to be] creating opportunities for your client in different places.”

As the world turns back on, and live performances come back into our lives, touring will return for so many artists that have always depended on it. But even with IRL shows back, the importance our digital lives now hold isn’t going away.

The metaverse is coming—in a lot of ways it is already here—and Marshmello’s moves are a primary case study in what it means to carve out your online universe, and invite your audience in.