We are a few weeks into the 2021–22 NBA season and that means it’s time for a too-early look at the top 10 MVP candidates (based on Vegas Odds) and their card prices. In order to normalize the analysis, key rookie cards (Prizm + Topps Chrome Refractors) are analyzed for the players on this list. The list is dominated by veteran players and the top 3 MVP candidates have tight odds to start the season. Remember, it’s early in the season and it is way too early to predict an MVP winner, but it’s fun to see how prices are trending based on play so far this season. 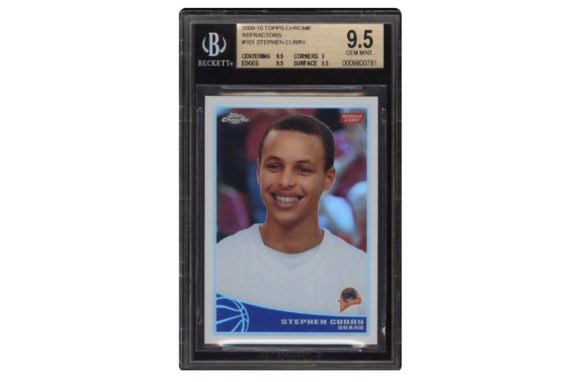 Steph Curry is currently the favorite to win NBA MVP as the Golden State Warriors are 7–1 with his 25.8 points per game and 6.8 assists per game. Curry is a 3x NBA champion, 2x NBA MVP, 7x All-Star, and is 2nd all-time in 3-pointers made behind Ray Allen. ESPN ranked Curry the 13th best NBA player of all time and the Golden State Warriors currently have the 4th-best odds of winning the 2021–22 NBA Championship. 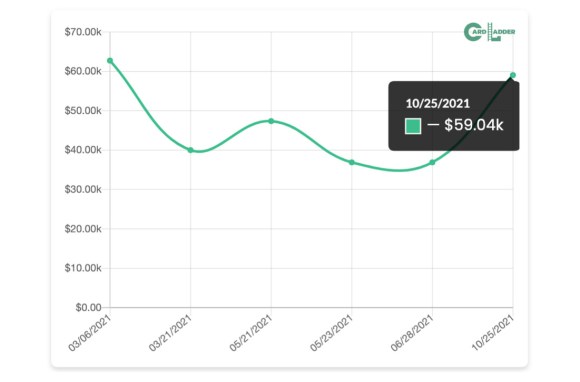 This past July, Curry’s 1/1 Logman National Treasures Auto Rookie card set a record with a $5.9 million sale. Curry is one of the most accomplished and popular players in NBA history and it will be fun to watch the MVP race and how his card prices react if he’s the favorite as the season progresses. 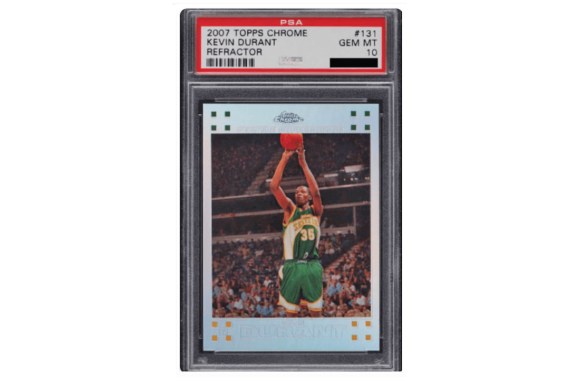 Kevin Durant is a former teammate of Steph Curry but now plays for the Brooklyn Nets, who are currently 7–3. Durant is a 2x NBA champion, 1x NBA MVP, and is currently ranked 26th amongst all-time NBA scoring leaders. Throughout his career, Durant has averaged 27 points per game, 7.1 rebounds per game, and 4.1 assists per game. ESPN ranked Kevin Durant the 14th best basketball player of all time, 1 spot behind Steph Curry.

The Brooklyn Nets currently have the best odds to win the 2021–22 NBA championship. 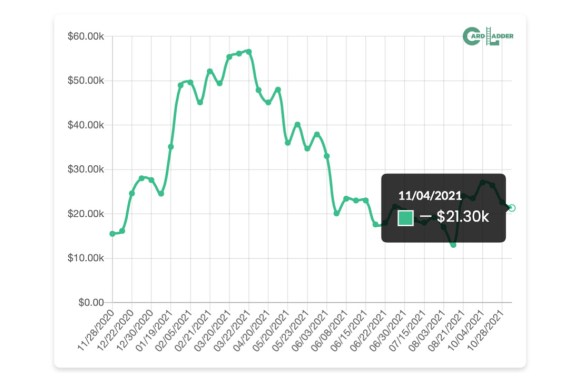 The Nets were edged out by just 1 game in a playoff series against the Milwaukee Bucks last season, so perhaps a championship run could help Durant’s rookie card prices. If Durant plays the majority of games this season and continues to maintain his 27 points per game average, he could propel himself into the top 10 scoring leaders of all time. If one (or both) of these things happen, it will be interesting to see where his card prices end up. 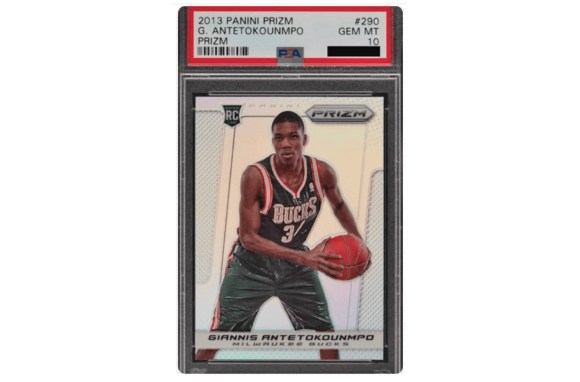 Giannis Antetokounmpo is just 26 years old and is already a 2-time NBA MVP, 1x NBA Champion, 1x NBA Defensive Player of the Year, and 1x Most Improved Player. The Bucks are off to a rough 4–6 start, but currently have the 3rd best odds to win the 2021–22 NBA Championship. 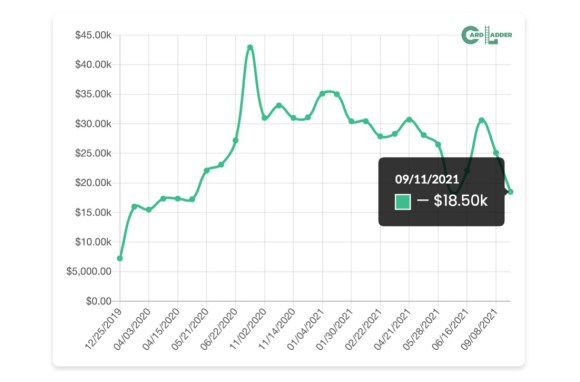 His base rookie card has a much higher population with 2,656 copies graded PSA and last sold for $1,850.

Since their record highs, the Prizm Base lost 74% of its value and the Prizm Silver lost 57% of its value. The market may have built-in multiple NBA championships at those prices and has since cooled off. Antetokounmpo’s card prices have remained relatively consistent as of late and he’s still a young talented player with plenty of his career left. 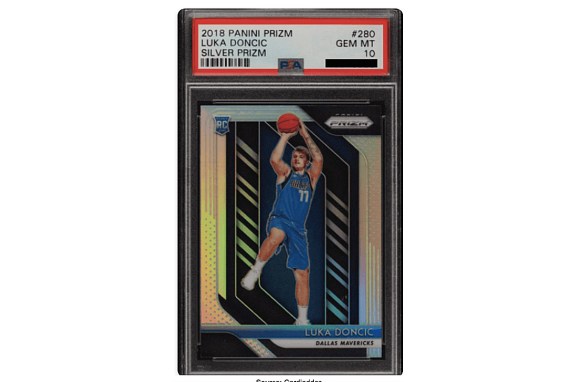 Luka Doncic is one of the most exciting young players in the NBA and he didn’t disappoint with a game-winning 3-pointer against the Boston Celtics on 11/6. Doncic is only 21 years old and has averaged 25.7 points per game, 8.4 rebounds per game, and 7.7 assists per game so far in his career. He’s already accomplished a lot in a little over 3 seasons with a Rookie of The Year award, 2x NBA All-Star selection, 1x First Team All NBA selection, and has a top 4 MVP voting finish.

And at one point, his National Treasures Rookie Patch Auto Logoman 1/1 was the most expensive basketball card ever sold with a price tag of $4.6 million. 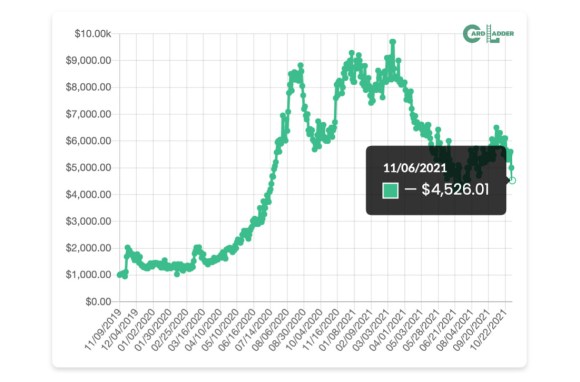 The Dallas Mavericks currently have the 11th best odds to win the 2021–22 NBA Championship, but Doncic finds himself with the potential to be in the top 4 of MVP candidates this year. 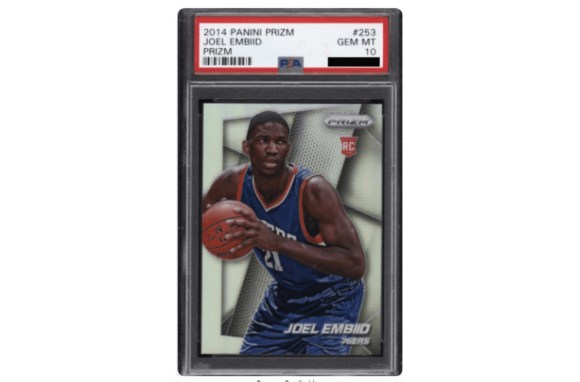 Joel Embiid finished 2nd in NBA MVP voting last season and has averaged 24.7 points per game, 11.2 rebounds per game, and 3.1 assists per game in his 5-season career with the Philadelphia 76ers. The Sixers have made playoff appearances in the last 4 seasons, but haven’t made it past the Conference Semi-Finals. Embiid has struggled with injury throughout his career but has been an NBA All-Star 4 out of his 5 active seasons. 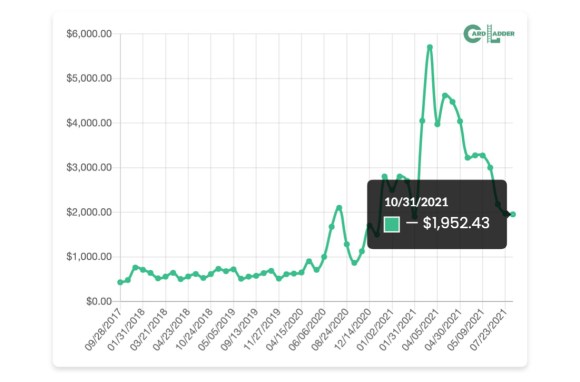 Embiid’s Prizm Silver PSA 10 hit a record $5,700 price in March of this year but has been on the decline since. The card has lost 65% of its value since that sale.

The basketball card market generally does not value centers as highly as guards, but Embiid is 27 years old and the Philadelphia 76ers currently have the 9th best odds to win the 2021–22 NBA Championship. Perhaps an MVP win or NBA Championship appearance could change the trends for Embiid rookie cards. 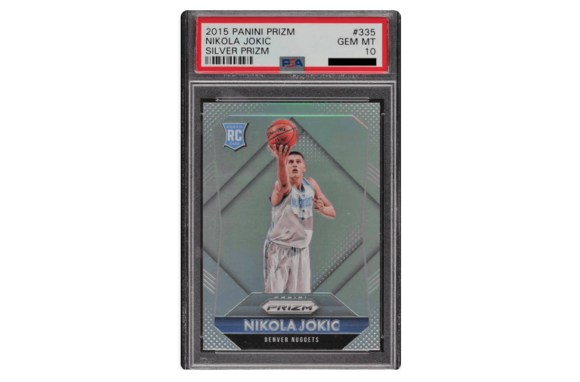 Nikola Jokic was the NBA MVP for the 2020–21 season and is a 2x All-Star. He’s averaged over 25 points per game in his last two seasons and is a high-scoring Center like Embiid. 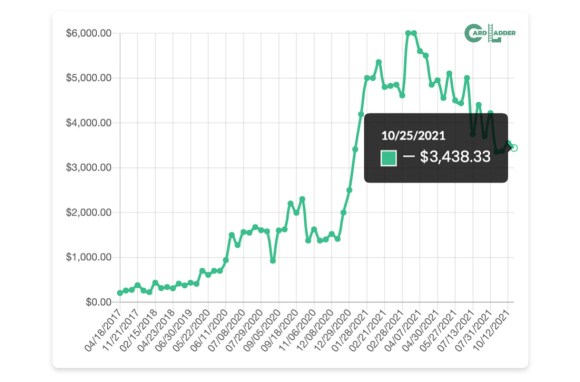 It’s clear that his MVP win boosted his card prices, but he currently has the sixth-best odds at a repeat and the Denver Nuggets currently have the 10th best odds to win the 2021–22 NBA Championship. 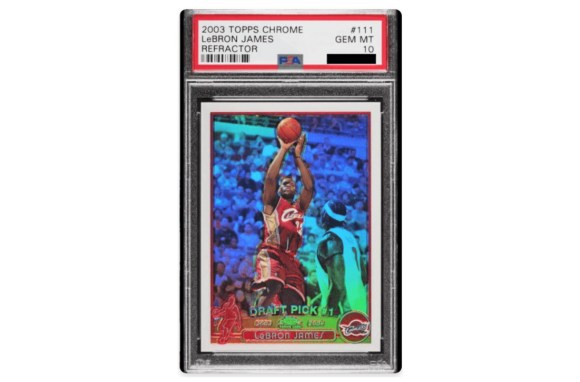 ESPN ranked Lebron James the 2nd best NBA player of all time. James is a 4-time NBA MVP, ranks 3rd all-time in most points scored in NBA history (and has a legitimate shot to take the #1 overall spot), is a 4x NBA Champion, holds the record for most points scored in the NBA playoffs, and is a 17-time NBA All-Star.

While he has the 7th best odds at NBA MVP this season, the Los Angeles Lakers currently have the 2nd best odds to win the 2021–22 NBA Championship. James is already one of the most accomplished NBA players of all time but still has a legitimate opportunity to add to that resume. 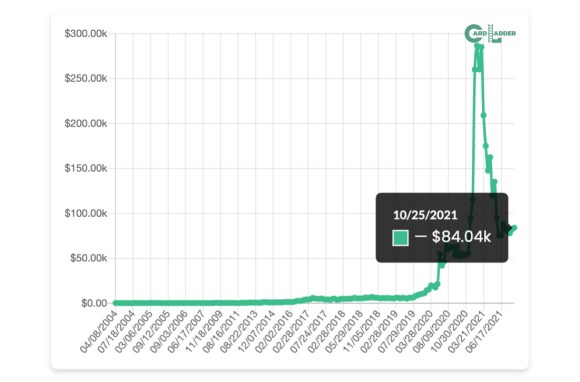 His higher-end cards continue to sell for 7-figures with a Goldin Auctions October sale of his 2003 Upper Deck Exquisite Rookie Patch Autograph (Jersey #) /99 for $2.46 million. 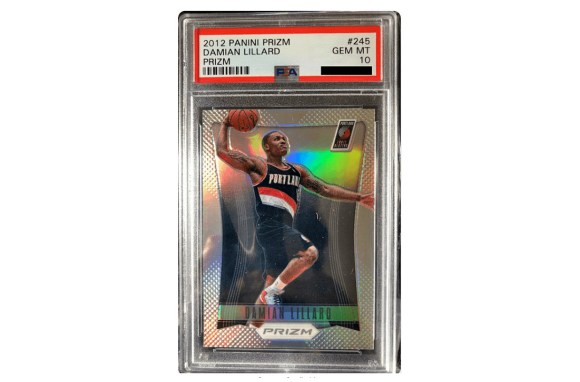 ESPN ranked Damian Lillard as the 72nd best NBA player of all time. Lillard won the Rookie of the Year award and is a 5-time NBA All-Star, but has yet to win an MVP award or an NBA championship. In his 9 seasons with the Portland Trailblazers, he’s averaged 24.6 points per game and 6.6 assists per game. He’s also scored 60 or more points in 3 NBA games, where just 4 players have had more 60-point games. 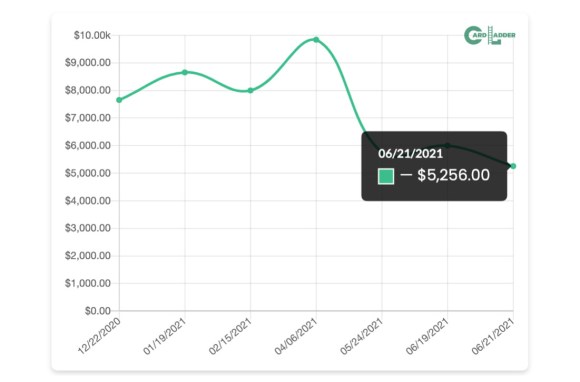 Lillard is 31 years old and is an exciting scorer, but is still without an MVP award or an NBA championship. The Portland Trailblazers currently have the 16th best odds to win the 2021–22 NBA Championship and are 5–5 to start the season. 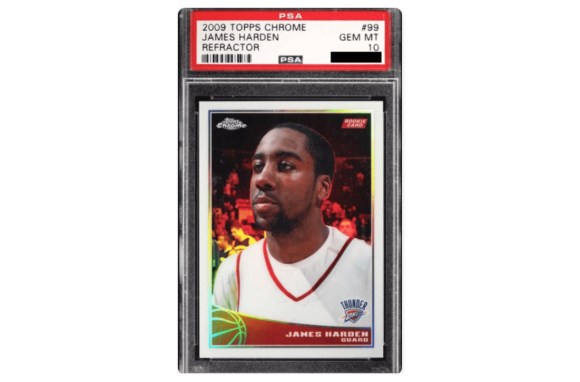 ESPN ranked James Harden as the 32nd best NBA player of all time and he is a 1x NBA MVP, 3x NBA Scoring Champion, 9x NBA All-Star, and 6x All NBA First Team selection. Harden has not won an NBA championship during his career but is currently on a Nets team that is favored to win the championship this season. 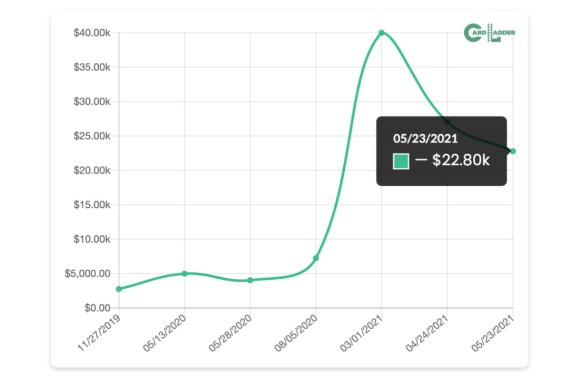 Unless Harden moves up in the NBA MVP odds rankings, it’s more likely that an NBA championship with the Brooklyn Nets would drive his card values upward. Harden is a polarizing player but the 32-year-old has an accomplished career and is in a position to add the most important piece to his resume: an NBA championship. 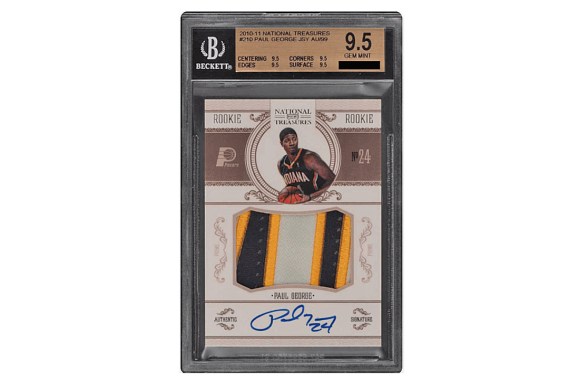 Paul George is a 7x NBA All-Star, 1x All NBA 1st team, 4x NBA All-Defensive team, and 1x Most Improved Player Award winner. He’s never won an MVP award (although he finished 3rd in the 2019 season voting) and has not won an NBA championship.

George has scored 20+ points in 18 consecutive playoff games (only Michael Jordan, Kevin Durant, and Kobe Bryant have accomplished this). Over the course of his career, he’s averaged 20.3 points per game and 3.5 assists per game. Through the first 8 games of the season, he’s averaging nearly 28 points per game.

The Los Angeles Clippers currently have the 8th best odds to win the 2021–22 NBA Championship but are off to just a 4–4 start. George may be a dark horse to win NBA MVP this season but has had an accomplished career so far.

George does not have a Topps Chrome or Prizm rookie card, but his 2010 National Treasures Rookie Patch Autograph /99 is recognized as his top rookie card. 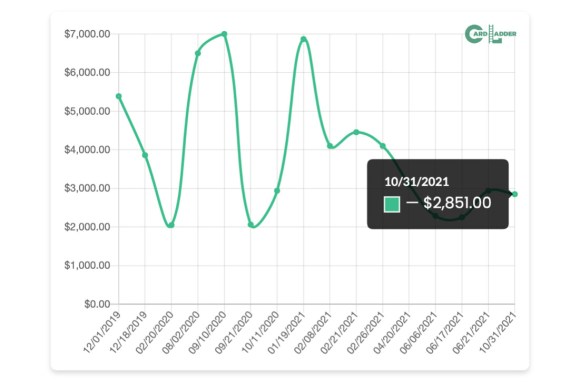 The card has increased in price since June but is still well below the record $7,000 price tag when it sold in September of 2020. The card dropped to a low price of $2,251 before gaining 26% value with its latest sale.

Without a flagship rookie card product, many of Paul George’s rookie cards are very affordable, but serious collectors will likely look to his National Treasures rookie card.