The explosive recent rise in the value of Pokemon cards has opened the eyes of investors and former collectors looking to get back in the game. The original Pokemon base set (1999 1st Edition Shadowless) is the most collectible, with record breaking single card sales happening almost daily on eBay.

“Every generation defines what is nostalgic to them,” says Collectors Universe President Joe Orlando. “Pokémon started its rise in the U.S. during the late 1990s. Today, the young people who were playing the classic game then are now well into adulthood. As a result, the game has enjoyed a kind of rebirth in the hobby.”

This list of 10 cards from the iconic original set breaks down the total population of each card graded by PSA, as well as their most recent sales to illustrate their current value. 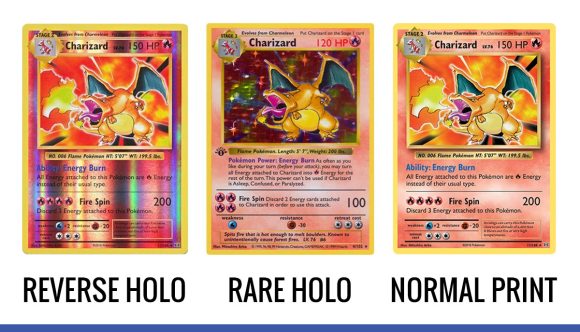 The first step to identify if a card is potentially worth anything substantial is to check its type and rarity. In other words, how likely the card is to come across from any given booster pack or special event, and if it has any special characteristics, such as card material or Pokemon types.

There are a few indicators of rarity on any given card, though they’re quite subject to change depending on when said card was printed. A marker near the bottom of the card or near its name will indicate rarity: a circle means the card is common, a diamond means it’s less common, and stars mean it’s rare. More stars or with combinations of letters or symbols mean extra rare, including if those symbols are in the name or elsewhere on the card. Other characteristics that can up the rarity include: a higher printed number than there should be in a given printed set (e.g., 66/65); holographic artwork or reverse holographic, in which everything but the artwork is holographic; artwork that takes up the full card; artwork wherein the creature doesn’t cast a shadow; and any shining characteristics, not to be confused with holographic.

There are also special types of cards, like the aforementioned special events that sometimes award cards to tournament winners. For example, one of the most coveted cards, the Trophy Pikachu Trainer Card, was only given out to competition winners in Japan and is so rare that it is considered priceless due to the lack of sellers. And a Pikachu Illustrator card, awarded for a Pokemon award competition, allegedly sold for a cool $90,000 USD.

While rarity isn’t the only factor in appraising value, it’s certainly a major factor: Some of the highest-selling cards worth tens of thousands of dollars, or considered “priceless” from lack of supply, are only so because of small rarities like misprints or typos.

As for the more common cards that don’t match any of these characteristics, the consensus advice online is to sell those in bulk. Though the individual cards may only be worth a few dollars at most, a complete collection of them can likely fetch a little higher of a price. That’s not a terrible idea for someone wanting to get rid of a bunch of common cards and turn a profit.

How do I Find the Value of My Cards? 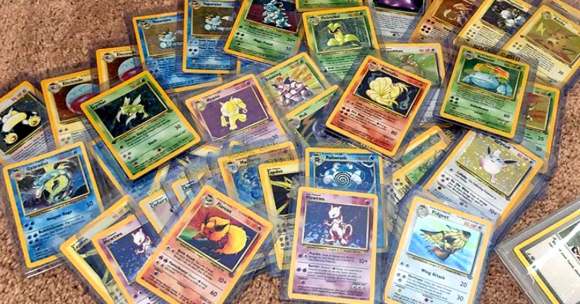 Taking your old cards out of the closet and researching to find their current value is the most common way people are getting back into Pokémon. When trying to figure out a card’s value, make sure to follow these steps: 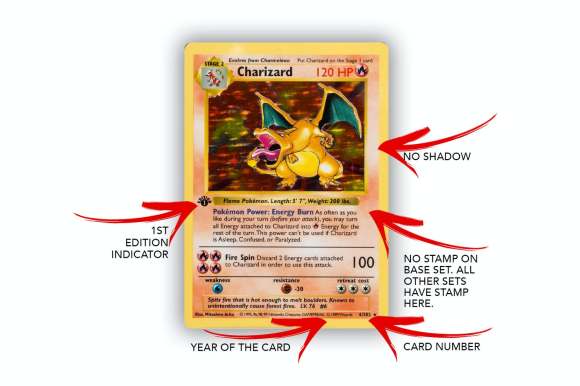 Step 2. Find the set the card belongs to. If there is no logo on the right side, it’s Base. Every other set has an indicator.

Step 3. Identify the card with the name and number in the set. 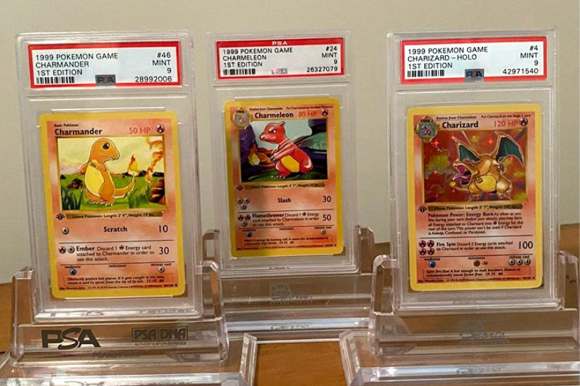 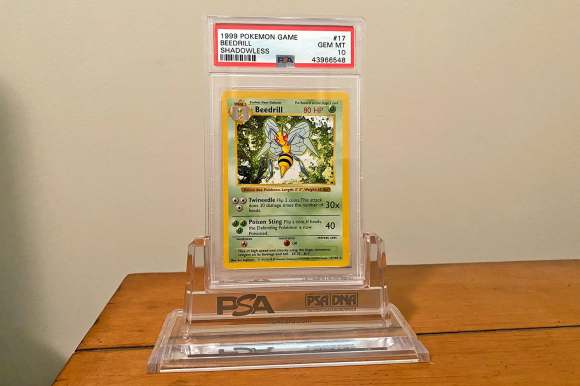 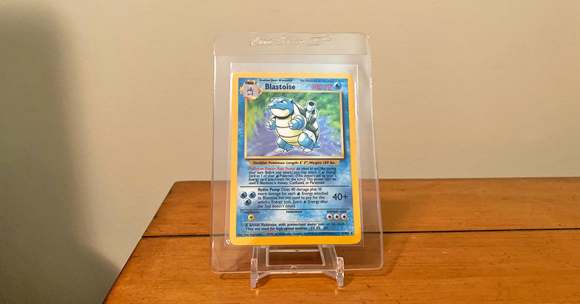 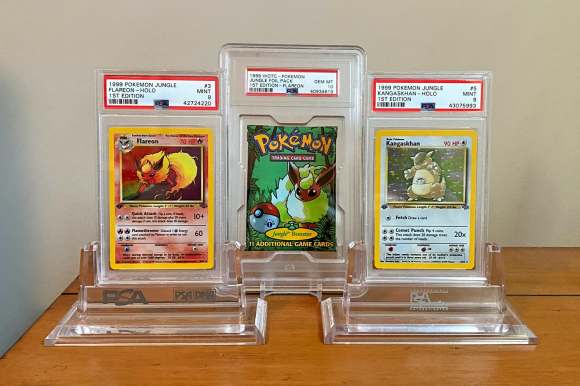 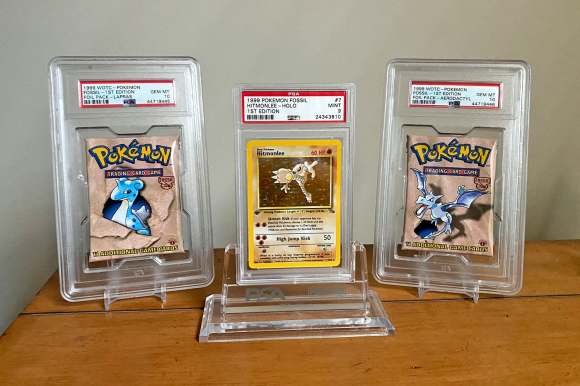 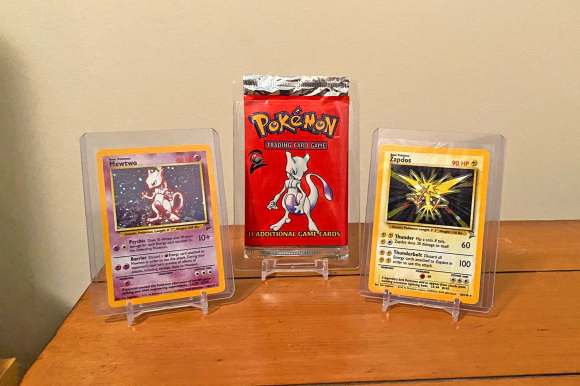 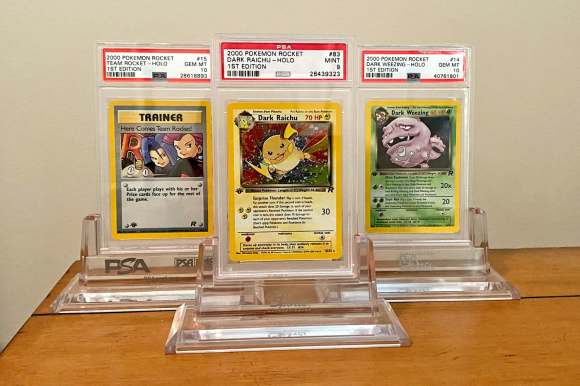 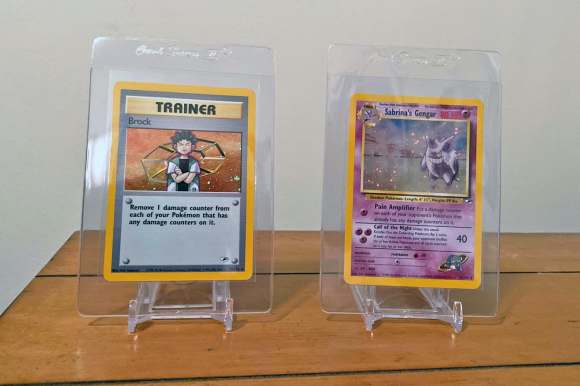 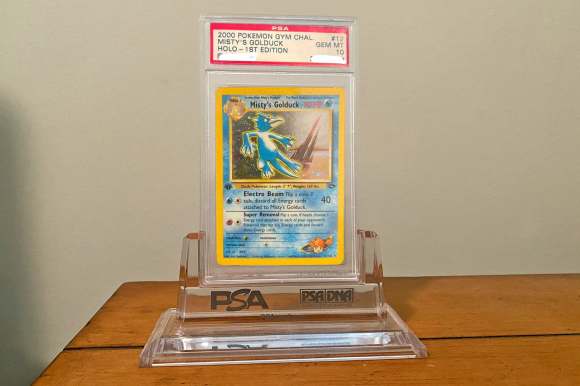 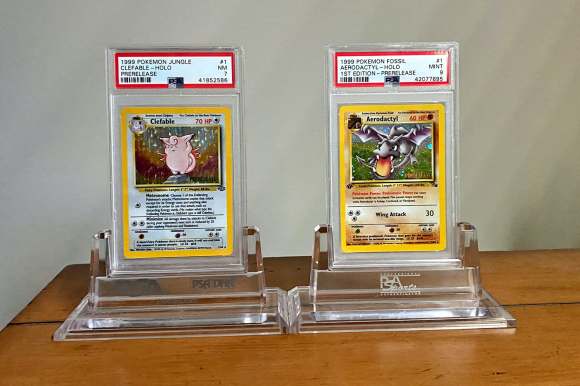 Pokémon had numerous promo cards: E3 promos, Black Star Promos and Prerelease promos. They were available at events, in magazines, by mail request and one was available with a VHS film. Due to scarcity, some have skyrocketed and the demand is increasing rapidly.  You can read more about Black Star Promos in this article.

What Are My Pokemon 1st Edition Base Set Cards Worth?

If you own any of the cards listed below, condition is the biggest factor in figuring out what your cards are worth. The prices below illustrate what these cards are worth after grading in mint condition as PSA 9’s & 10’s. It is very unlikely that your cards will grade this high if they have been played with. If you have these cards laying around in less than mint condition, it still may be worth getting them graded as long as they are in pretty good shape. 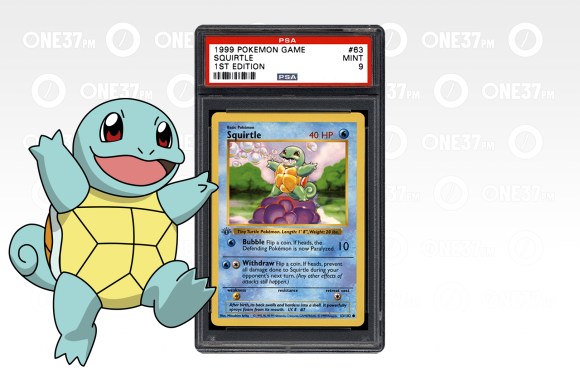 Squirtle is the first evolution of Blastoise and carries the 2nd most value of any of the big three pre-evolutions. Although grading has slowed down drastically, prices have dipped in the Pokemon market. That said, Squirtle is one of the essential characters of the show and is a must have for any collector.  Be sure to assemble your Squirtle-Squad by acquiring his English Rookie card. 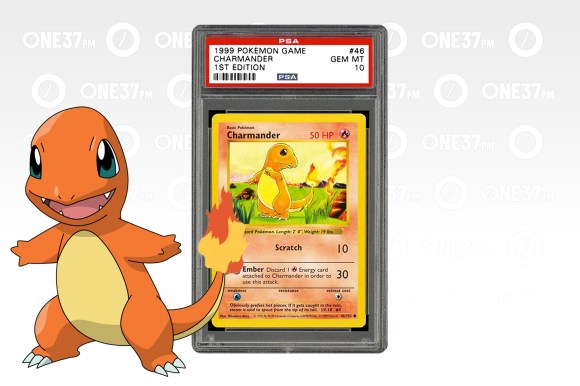 Charmander’s value has been all over the place in the last 12 months. After the 2020 summer of record sale after record sale, baby Zard’s value has taken a dip recently, but don’t be surprised if Charmander rebounds due to the power Charizard yields on the market. 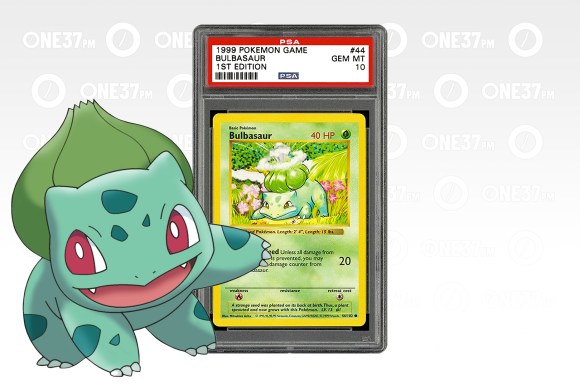 One of the most popular Pokemon, Bulbasaur delivers long term. Previously third in the pecking order for PSA 9’s, Bulbasaur is currently higher than Squirtle and Charmander. With low populations, be sure to make Bulbasaur a top priority.

Pikachu is the most well known Pokemon out there and considered to be a mascot of sorts. There are two versions of Pikachu in this set – with a red cheeked and a yellow cheeked variant. The red cheek is the more rare and valuable of the two, while both have similar population reports. Pikachu Prices have dropped drastically, which is great for collectors looking to acquire the grail non holo. 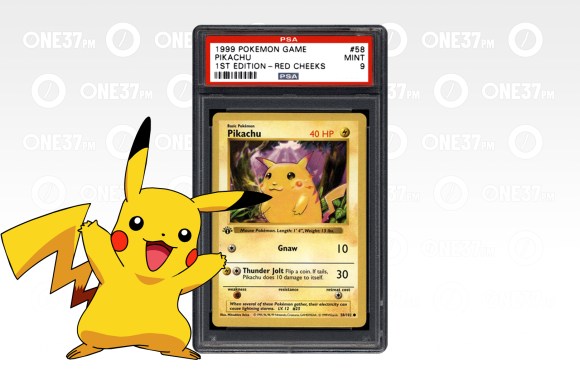 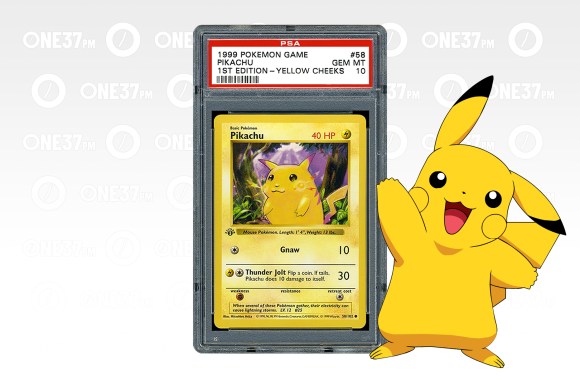 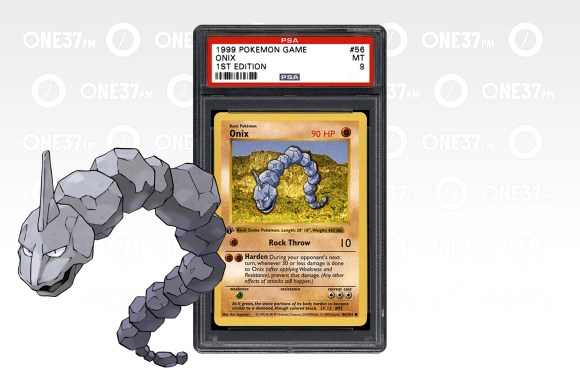 Onix was introduced in the TV show as Brock’s main Pokemon when Battling Ash. The massive Rock Snake, Onix, is deserving of more attention due to this, and with card prices steadily climbing, Onix’s english Rookie card is a solid addition to any collection. 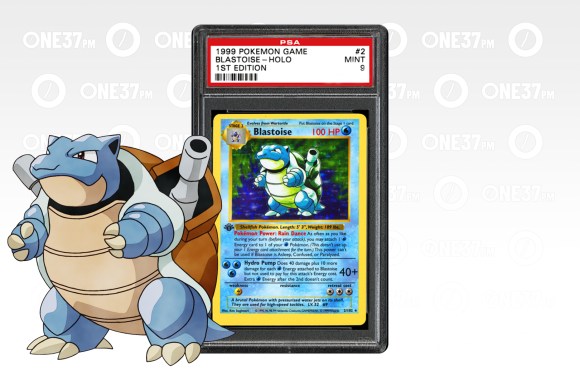 Blastoise is the final evolution of Squirtle. The 2nd most valuable card in the set, Blastoise is also the most powerful card in the game. When looking at the price difference between Charizard and Blastoise, and knowing they are both going to be 1 & 2 moving forward, Blastoise will be undervalued until investors decide the 2nd most valuable card is worth much more than 10-15% of the top card, while having a lower graded population. 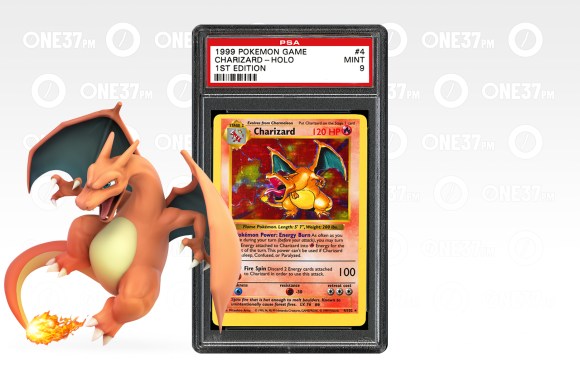 This card is the pinnacle of Pokemon collecting. The 1st Edition Charizard has been setting massive records for close to a year. The rarest card in the set, Charizard is also the most graded hologram of any 1st Edition Shadowless holo. Even non-collectors know that the Charizard holo will make you the king of the playground, in any condition. 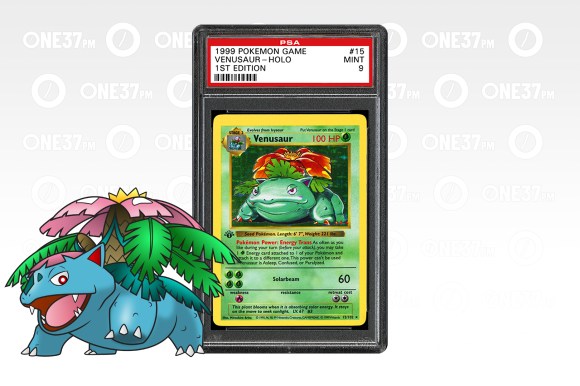 Venusaur is the final evolution of Bulbasaur, and has consistently been the 3rd most valuable card in the set. When the prices rise again, Venusaur will be very difficult to obtain. This is a must have card for all Pokemon collectors. 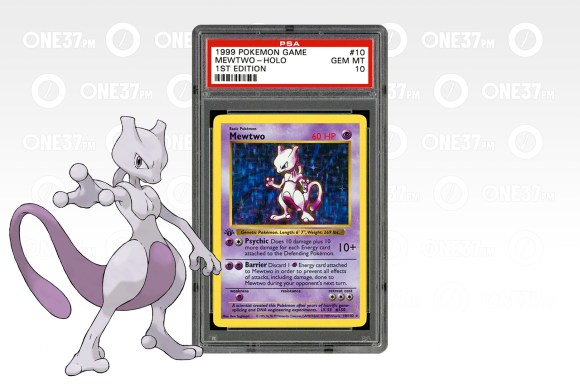 Mewtwo is by far the most underrated hologram in the set. The most powerful original Pokemon, Mewtwo is also the smartest. Evolved from the Ancient Mew, Mewtwo was engineered in a lab. Mewtwo is currently the 4th most Valuable card in the set, which is a no brainer considering abilities and being the 1st major Poke-villain in the Pokemon Movie Mewtwo Strikes Back. 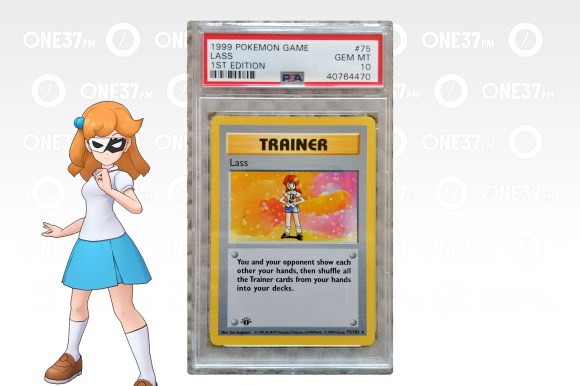 The first female Pokemon card, Lass, is also one of the rarest trainer cards to pull. On top of that, the graded population is very low. Lass has been in demand for years, with sales for PSA 10’s being tops of any trainer cards in the set for over 5 years. Lass is also a must have card for collectors. 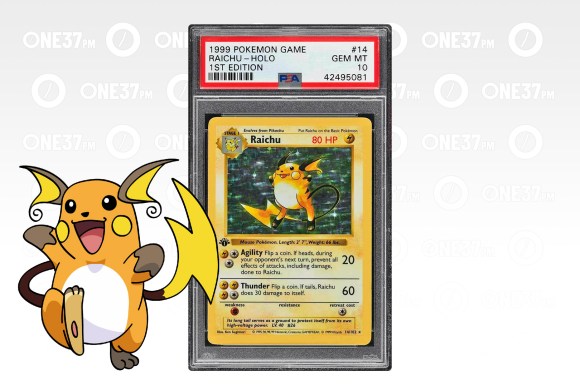 The evolution of Pikachu, Raichu is mighty undervalued. First introduced in the show as a top Pokemon for Lt. Surge, Raichu was dominant until Ash’s Pikachu had the last laugh. The only way for Raichu to evolve from Pikachu is with the Thunder Stone. Also, Raichu is capable of storing 100,000 plus volts of electricity. 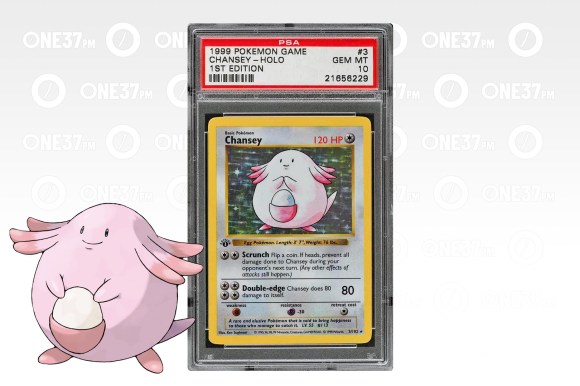 Originally known as Lucky, Chansey is known for assisting nurse Joy in the Pokemon Centers in the show and video games. A very popular card amongst gamers, combined with issues during production, Chansey is one of the toughest cards to receive PSA 10 grades, with only 47 current examples. 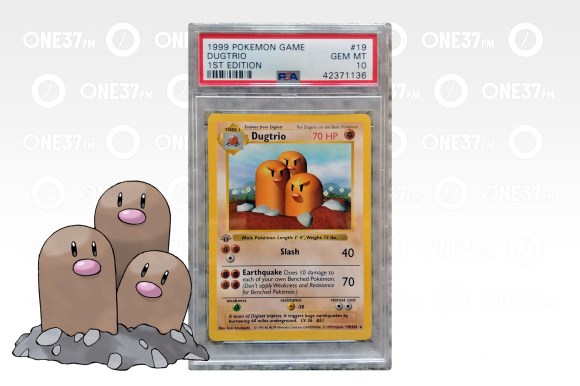 The evolution of Diglett, Dugtrio is the triple headed angry Mole. Dugtrio is also one of the most valuable non holo cards in the set. With only 137 PSA 10 examples, Dugtrio is a relative bargain, considering it’s the rookie card to own. This mole Pokemon is capable of creating tunnels at 60 MPH, which sometimes can cause earthquakes. 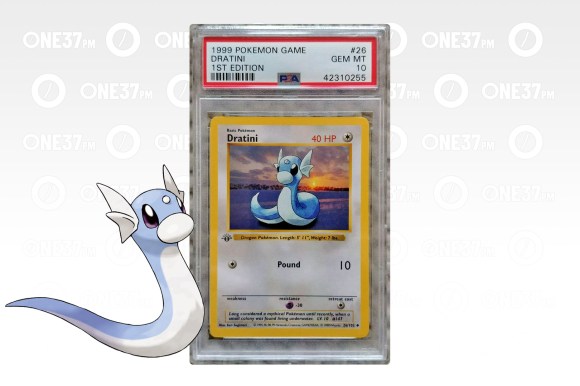 This adorable dragon Pokemon is highly desirable in the card community, topping $4,000 in PSA 10 early in 2020. Although that was a hefty overpay given the current market, Dratini will rebound over time. Low population PSA 10 rookie cards will always rise over time. Dratini is the original form of Dragonair & later Dragonite. 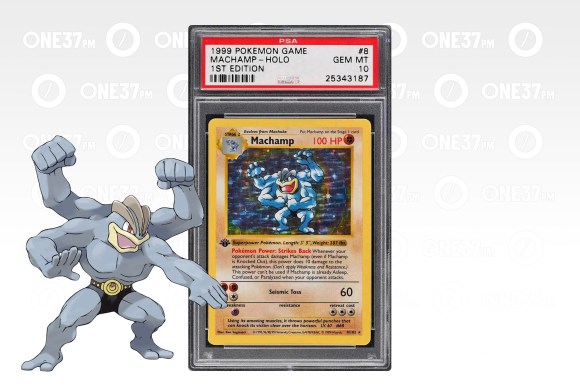 This is where things get hairy. Although Machamp is finally being properly labeled, most listed as 1st Edition are really the Unlimited version. Make sure to check the font, year(s) listed on the card or just check out our Ultimate Pokemon Guide for more information.

Also, check out where Machamp lands in our Most Powerful Pokemon.

What’s Ahead For Pokemon? 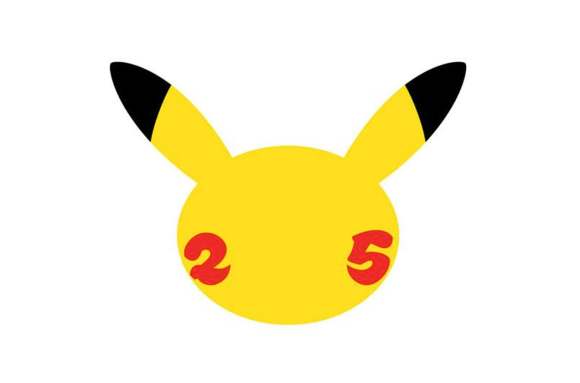 February 27th, 2021 marked the 25th Anniversary of the launch of the Pokémon franchise. With that milestone in mind, Pokemon is set for some major new releases including Pokémon Brilliant Diamond and Pokémon Shining Pearl, which will launch in late 2021, and Pokémon Legends: Arceus, which will launch in early 2022. All three games will be available exclusively on the Nintendo Switch™ system.

New Pokemon Snap launches on April 30, 2021, also on Nintendo Switch, in which players will act as Pokemon photographers in the Lental region, working with Professor Mirror on an ecological survey. These photos will receive a score of one to four stars based on how rare the behavior displayed in the photo is. Players will be able to share the photos with others around the world and compete through ranking systems.

We recently had a chance to sit down with Dan “aDrive” Clap, one of the leading creators of Pokémon content on YouTube and Twitch, to get his insight as to what we can expect to see in 2021 in greater detail. Check it out!