At this time last year, a PSA 10 1st Edition Base Charizard was struggling to fetch more than $60,000.00. Today theyâ€™re over $300,000.00. If you noticed the â€˜Zard on Logan Paulâ€™s chain Sunday night and are wondering why itâ€™s so much more expensive, youâ€™ll find the answers here. In this article, we will review the last year for 1st Edition Base English PokÃ©mon cards, aka the English Grails, along with some interesting factoids not often mentioned.

First off, what a power move by Logan Paul to announce himself as the owner of the third Beckett 10 1st Edition Base Charizard on a PPV. The other two BGS 10 â€˜Zards are owned by Gary Haase. Whatâ€™s wild is, the PSA 10 Charizard Logan purchased from that same Gary back in 2020, is the BGS 10 he currently owns. So Beckett cross-graded the card and here we are, looking at a card that went from being worth $300,000.00 to well over $750,000.00 today.

For Reference, PSA has over 120 10 Grades in their registry. Beckett has 3.  If you are asking why this is, it’s simple, Beckett has a tougher threshold to score a 10 than PSA. Beckett also has a 9.5 grade, whereas PSA does not. Grading is subjective, and you should check out the Ultimate PokÃ©mon Guide to get a better grasp.

Now let’s take a deep dive into the Base 1st Edition Holograms and a couple of Non-Holograms. The price range over the last 365+ days is staggering, and a lot of cards are currently going much lower than anyone would have anticipated. With that said, the market correction from October/November 2020 to now is gigantic for a good amount of the cards being mentioned today. 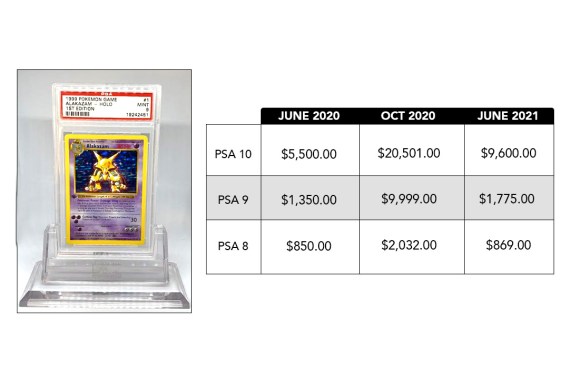 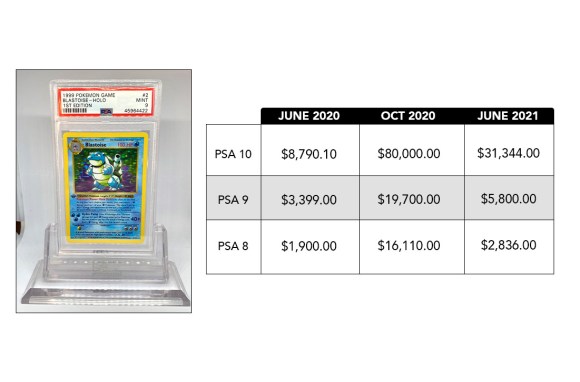 Blastoise is and will always be the runner-up to Charizard. As the second most valuable 1st Edition PokÃ©mon, you can see just how pricey â€˜Stoise became at the height of the market. 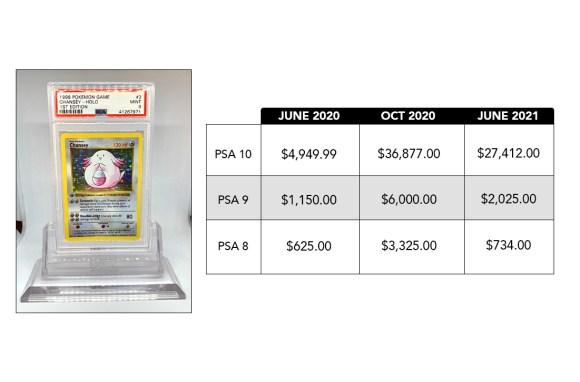 The hardest 1st Edition PokÃ©mon card to grade in PSA 10, Chansey has held strong. Even the PSA 9 is worth nearly double what it was selling for a year ago. Chansey is probably the most underrated hologram in the set moving forward since there are only 48 PSA 10â€™s, 384 PSA 9â€™s & 349 PSA 8â€™s. 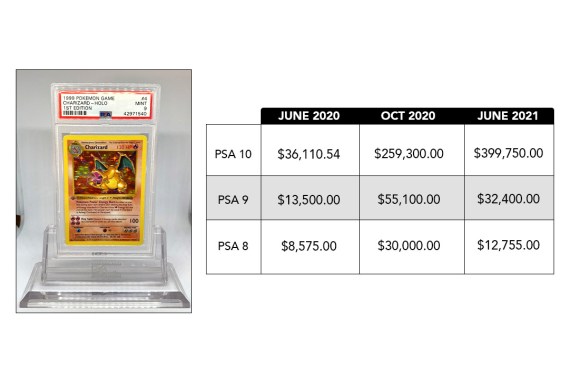 All hail the king of PokÃ©mon Cards. Charizard will always reign supreme regardless of population, due to the sheer demand this card commands as a collectible. The list of celebrities who obtained one in the last year is staggering. From Steve Aoki to Logic, Logan Paul, Gary Vee & Jeremy Padawer, the list goes on. 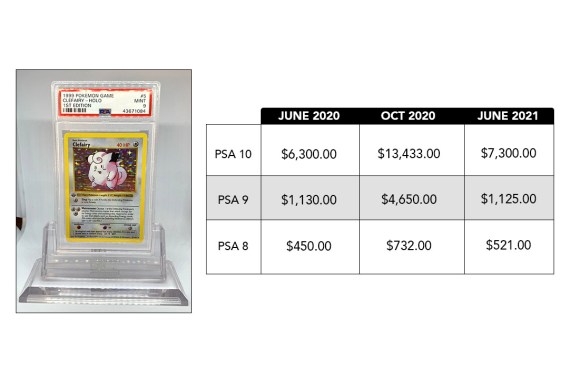 Another one of the hardest 1st Edition PokÃ©mon cards to grade, Clefairy, has a PSA 10 population of just 65, PSA 9: 392, PSA 8: 300. Remember, these are the English rookie cards for PokÃ©mon. Although Clefairy might put PokÃ©mon and people to sleep, that doesnâ€™t mean you should sleep on the current prices. 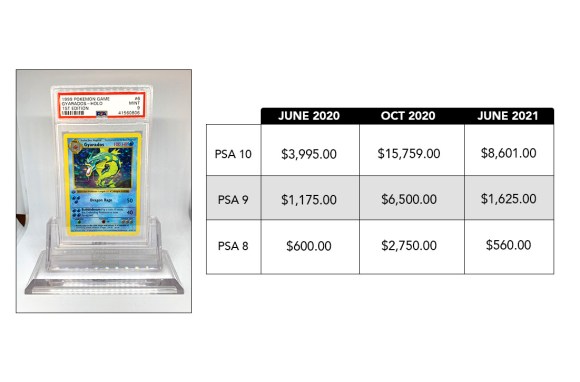 Gyarados has seen one of the larger dips of the PSA 9 & 8 graded holograms in this set. That shouldnâ€™t deter you from investing in this water dragon. Gyarados is one of the baddest artworks and will carry a premium long-term, given the population of 86 PSA 10â€™s, 392 PSA 9â€™s & 292 PSA 8â€™s. Check out where Gyarados ends up on the Most Powerful PokÃ©mon list. 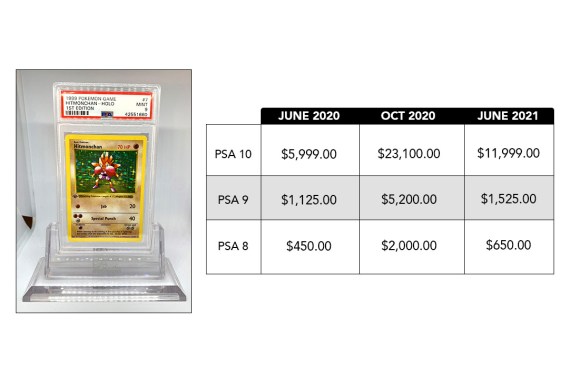 Another one of the toughest cards to grade in PSA 10, this card packs a serious punch. Hitmonchan has a PSA 10 population of 56, PSA 9 of 319 and PSA 8 of 287. Unfortunately, this is a very hard card to grade, from center to the edges; itâ€™s difficult to find pristine copies. On top of that, there are only seven confirmed PSA 10 sales since the beginning of 2020. 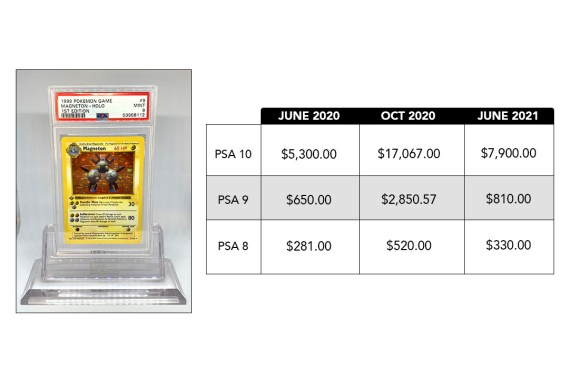 Magneton is another card that is way down since its peak. The height of the market in October 2020 showed just how far people were willing to go to get in on the 1st Edition holograms. The fearlessness to pay record money was surreal. That said, with prices down, this is a great time to pick up Magneton. The population is low, with only 64 PSA 10â€™s, 407 PSA 9â€™s & 297 PSA 8â€™s. 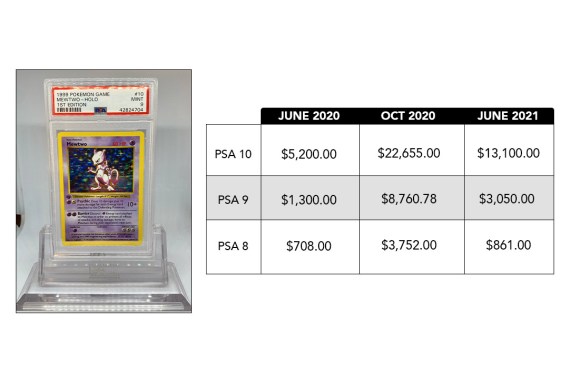 The ultimate PokÃ©mon villain, Mewtwo has mostly held strong over the last year. In previous years, it was tough to find a clean Mewtwo for sale. 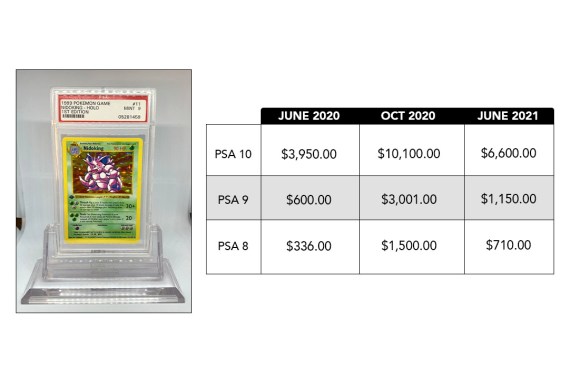 Nidoking was previously the 14th most valuable hologram in the set out of 16, but he has moved up the charts a bit of latefor his PSA 9’s and 8â€™s. Of all the cards on this list, Nidoking is probably the most volatile. The demand lacked in the past, but with a PSA 10 pop of just 90, PSA 9 of 458, and PSA of 293, you might want to get in while prices are down. 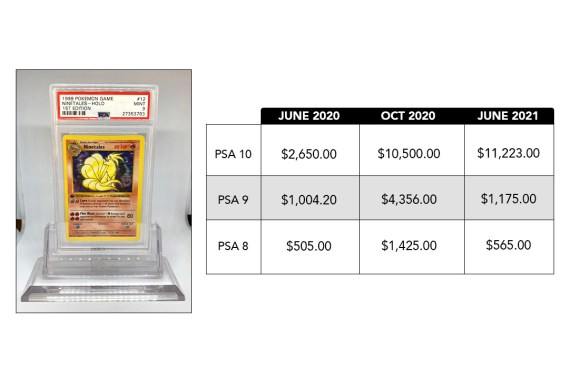 Ninetales is currently underrated. The hologram is fierce, yet elegant and the high-grade populations are low, with just 67 PSA 10â€™s, 381 PSA 9â€™s, and 273 PSA 8â€™s. This, like every other card mentioned in this article, has immense potential moving forward. 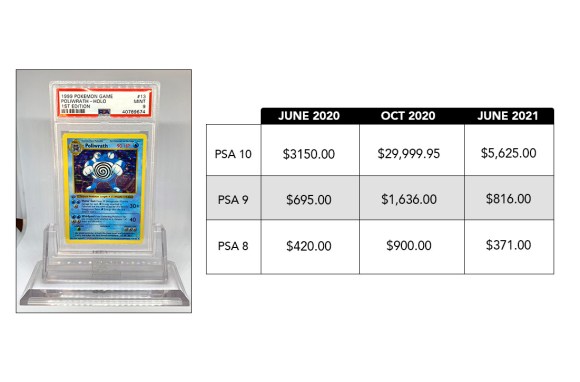 The record PSA 10 sale for Poliwrath stings today. The height of the PokÃ© market in the Fall of 2020 caused some wild sales. With Charizard soaring, it made some sense to buy high on other cards. That all changed fast with â€˜Zard being so far ahead of the pack. Poliwrath might be a buy at the current prices, but this isn’t a quick flip unless you believe the whole market is going to rebound fast. 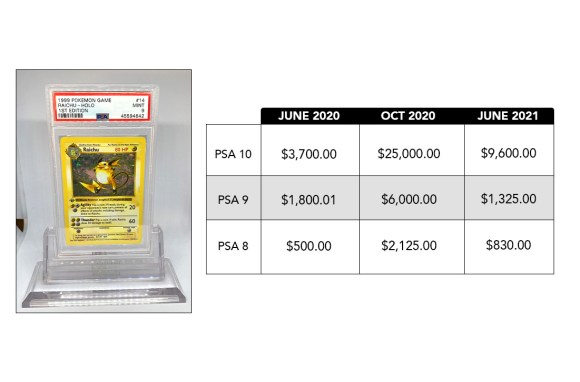 Raichu, the evolution of Pikachu, is certainly underrated. Even with 87 PSA 10â€™s, Raichu should be a top-eight card in this set. Definitely look at the auctions and listings when the market heats up again. Raichu will be a fast riser. 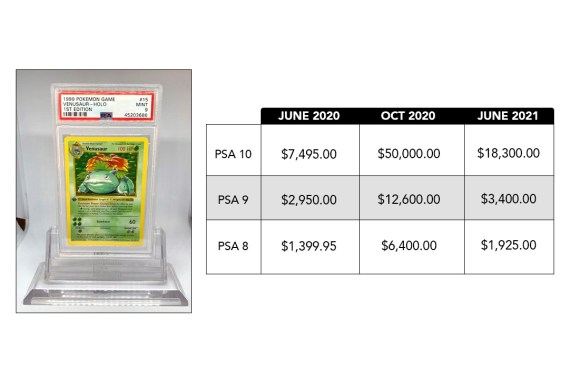 For the longest time, Venusaur was the third most valuable card in the set. That torch has been passed to Chansey, which makes sense since Venusaur has a PSA 10 population of 137 (Chansey’s PSA 10 pop is 48). That said, Venusaur is one of the “Big Three” along with Charizard & Blastoise. Even with a PSA 9 population of 536 and a PSA 8 population of 342, this card has held strong and should continue to do so due to demand and rarity. 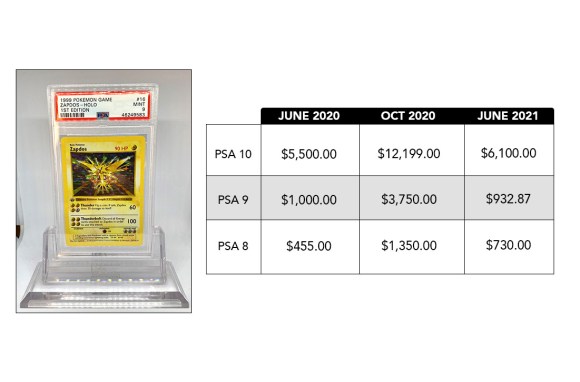 The only legendary bird in the Base Set, Zapdos has tailed off of late. With a population of (126) PSA 10â€™s, (468) 9â€™s, and (283) 8â€™s, thereâ€™s an opportunity to buy this card while itâ€™s languishing. Monitor the auctions for any potential deals before prices rebound. 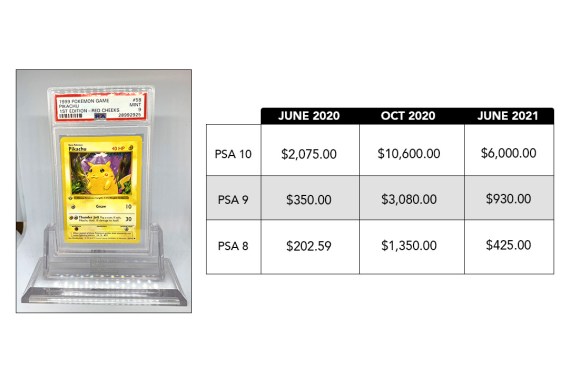 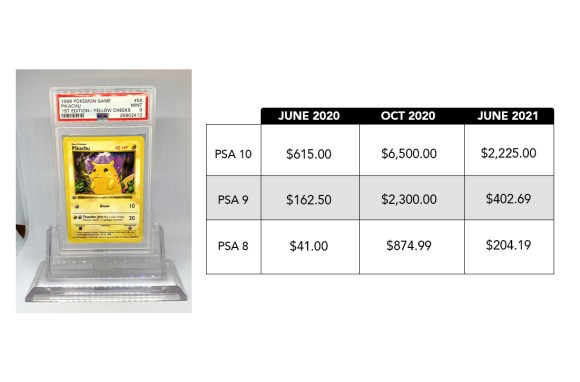 When thinking about PokÃ©mon over the last 365 days, there’s a lot of Charizard and Pikachu that come to mind. The escalation in demand for Pikachu was astronomical, with records being shattered into November. Prices are still 2-3X across the board for both Yellow & Red Cheeks, and thatâ€™s in a down market. This card is likely to hold its value, due to its popularity and being the ambassador of the brand.

When monitoring the 1st Edition set, itâ€™s always good to check the sealed pack and box sales to determine how strong the set is as a whole. Boxes are over $400,000, and 1st Edition packs that are encased in a blister fetch around $9,000, depending on the artwork. If they were from an unopened case, the price might double. Why? Because thereâ€™s no tampering of any kind, and they are considered as pristine as it gets.

This is the English grail PokÃ©mon set. Even the loose or beat-up variations of these cards hold some value. A raw 1st Edition Charizard that is in rough shape is typically still worth over $500. Why? Because it’s the most sought-after English card in any set.

Make sure to monitor eBay auctions, set timers so you donâ€™t forget, and try to get in on these deals before the market rebounds!