Donning an obnoxious bomber jacket with cheetahs on the front, Kendall kicks off this episode rehearsing “Honesty” by Billy Joel on stage in preparation for his upcoming birthday bash. And honestly, he doesn’t sound as bad as I had anticipated.

At Waystar, Shiv, Roman, and Tom are preparing for their meeting with GoJo, where they plan to acquire the company. Shiv and Roman have a mini argument about the deal while Tom silently sits alongside them and scrolls through prison facilities on his phone. The three of them walk to the meeting about GoJo and encounter the entire team toasting with champagne in the meeting room. Assuming that the deal has already been made, they walk in and are greeted with a different outcome: Gerri announces that after a call with the Department of Justice, they’ve decided not to pursue Waystar with prison charges and instead are going with a monetary settlement. 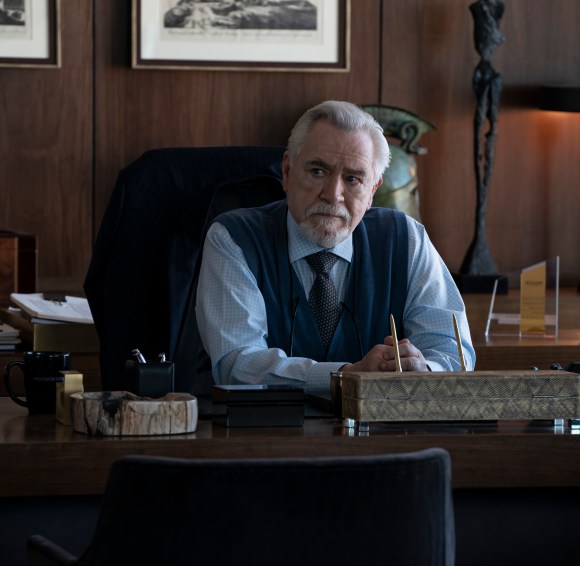 Tom tries to play it cool with this news, but being unable to contain his excitement, he heads over to Greg’s office/dungeon and has an unhinged and excited freak-out. But just before he left the meeting, Logan walked past Tom, grabbed his arm, and said, “I’ll remember,” with regard to Tom having offered himself up to go down for the team.

In Greg’s office, Tom flips over Greg’s extremely heavy desk, runs around the room, throws things around, and ultimately kisses Greg on the forehead upon telling him the good news. Having gotten that off his chest, he heads back to the meeting, and apparently, there might be an issue with the GoJo deal.

Back at Kendall’s, he’s going over the guest list with his PR assistant, Comfrey, who tells him all the A-list celebrities who will be attending. He then asks her about any updates on whether or not his siblings are attending, but when she hesitates (because none of them have RSVPd), Kendall quickly brushes it off and acts like it doesn’t matter to him.

At Waystar, Logan starkly announces that the meeting between them and GoJo is off the table, given that its CEO decided to send other staff to attend the meeting, which Logan took as a slap in the face. Shiv, Roman, and Gerri try to convince him otherwise, as the attendees are sitting just outside the meeting room. Frank announces that he reached out to Nan about trying to acquire Pierce again, which shocks Shiv, as they already tried to do that once before. Logan sends everyone back to work, except for Gerri, Shiv, and Roman, who stay to persuade Logan. 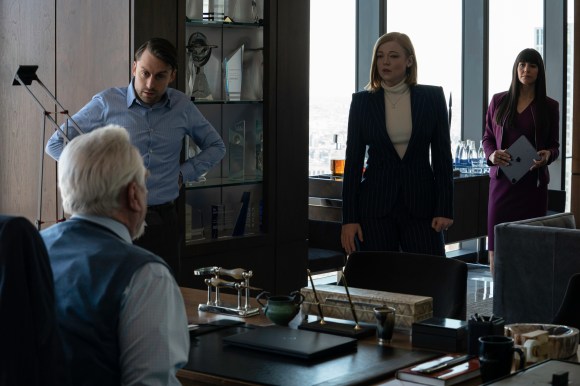 Shiv and Roman try to convince Logan to reconsider his decision with GoJo, but when his assistant, Kerry (with whom they believe their father is having an affair), agrees with Logan, Shiv doesn’t welcome her input. Instead, Shiv and Roman suggest that they attend Kendall’s birthday party, which Lukas Mattson (the head of GoJo) will be attending. Logan finally agrees to them going to Kendall’s, and on their way out of the meeting room, Logan hands Roman an envelope to give Kendall for his birthday.

At Kendall’s party, the siblings walk in and encounter a nurse in the lobby, who greets them and says, “Congratulations, youâ€™ve just been born into the world of Kendall Roy.” They then find Connor waiting in the lobby with his arm in a sling under his jacketâ€”apparently he had slipped and fallen prior to the party. Although he’s asked if he wants to remove his jacket, Connor refuses and continues into the party. This sounds extremely insignificant (which it is), but it’ll come back to the plot a little bit later.

The siblings finally greet Kendall, who’s in the VIP room, and Roman gives him Logan’s envelope (though he doesn’t open it just yet). Kendall then leads them through the party into a gallery exhibit within the event that is comprised of massive prints of newspaper covers that depict the Roysâ€”except for Kendallâ€”in a negative light. Connor takes it especially poorly, as he demands that Kendall remove the print of him. Just before heading back to the party, he tells his siblings that he’s happy that they came to his birthday. 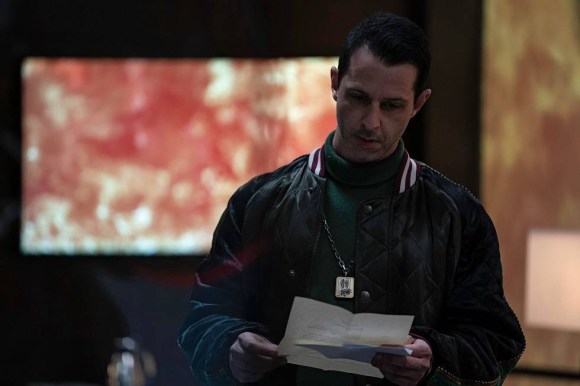 Off on his own, Kendall opens the envelope Logan and finds a birthday card with “Happy Birthday” crossed out on the inside that has been written in and replaced by, “Cash out and f*** off,” accompanied by a Share Purchase Approval document (meaning that Logan wants to buy him out of the company). It’s clear that Kendall is affected by this moment but tries to brush it off, as he always does. The sum of money ends up being $2 billion, but although Kendall is initially set against taking his father’s offer, his kind-of-girlfriend, Naomi Pierce, believes that he should reconsider.

Searching the party for Comfrey (of whom he has a crush on), Greg finally runs into her, but just as he’s about to ask her out, she tells him that she might have to brief the press negatively about him on Kendall’s behalf. After this run-in, she tells Kendall that she has been hearing that Shiv and Roman have been going around the party in a discreet search for a private meeting space with Mattson. Realizing why his siblings are actually there at his party, Kendall tells her to tell them that there’s space at a VIP area upstairs called the Treehouse.

At the Treehouse, Shiv and Roman are stuck outside because security won’t let them in, but are soon greeted by Kendall, who they assume will allow them inside. He then reveals that he knows about the plan to meet with Mattson and refuses to let him up because “losers” aren’t allowed up there.

After their unsuccessful try to get up to the Treehouse, Roman tells Shiv about what was in the envelope and says that “Dad and I handled it,” which greatly angers Shiv. Feeling frozen out, she storms off.

In the Treehouse, Kendall tells Mattson that he should be buying Waystar instead of the other way around as an attempt to ruin Shiv and Roman’s plans. After that quick chat, Kendall meets up with Rava, who asks him if he has opened up his kids’ present yetâ€”which he hasn’t (it was wrapped with rabbit-themed wrapping paper). Rava also mentions to Kendall that “goons” from Waystar have been following the nanny and kids at the park, which he was totally unaware of. 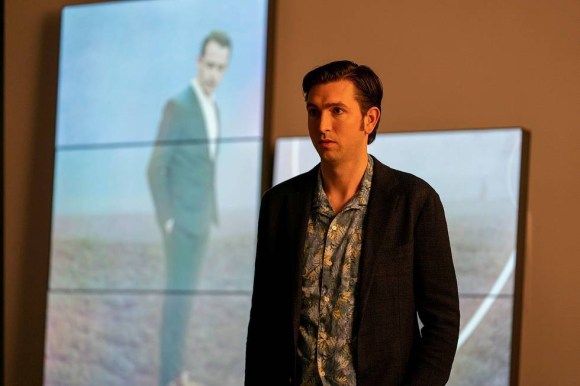 Greg runs into Kendall and tells him about how he wants to ask out Comfrey. Surprisingly, Kendall doesn’t take this news very well and ends up scolding Greg for crossing that line, along with personal attacks against his character. Despite that, Greg explains the situation to Comfrey, whoâ€”upon hearing what Kendall saidâ€”decides to agree to the date with Greg.

As a very mini side plot, Kendall sends Comfrey to force Connor to take off his jacket, no matter what. She walks up to Connor andâ€”in a multitude of different waysâ€”tries to get him to take off his jacket, but each time, Connor adamantly refuses. When things start to get heated between the two, Willa is the one to finally butt in, putting an end to the jacket situation by telling her to leave him alone. 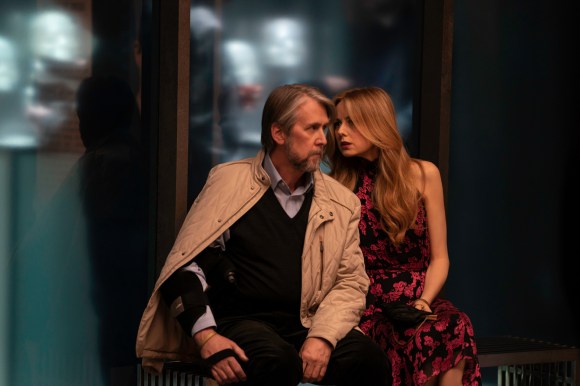 Roman is finally able to meet up with Mattson after he forces his way into the Treehouse. Portrayed by Alexander SkarsgÃ¥rd, Mattson is a fairly calm and casual guy, and the two strike up a good rapport almost immediately. Pretty quickly, Roman makes some great points about Waystar and how Mattson won’t have to deal with Logan if he decides to go along with the plan, which sways Mattson into agreeing to the deal. After a quick trip to the bathroom, where Roman suggests that Mattson should pee on his app, StarGo, Mattson agrees to a meeting to talk about making a final deal.

Kendall is about to make his big stage appearance when he suddenly decides not to go through with the plan (which required him getting into a harness and some sort of being nailed to the cross moment). At this moment, Kendall realizes that the party he created is exactly the vibe of the party that he didn’t want to have: one that “feels like an a**hole’s birthday party.”

Following that moment backstage, Kendall heads to the present room to search for his kids’ birthday present. Frantically looking everywhere, Kendall starts to get heated as he can’t seem to find it anywhere. In a poorly-chosen moment, Naomi chooses to give him his present, which is a new watch. Kendall is dumbfounded by the gift, clearly unhappy with it although trying to put on a good face. Unable to hold in his disdain for the present, he finally states that he was wondering why she would give him a gift like that.

Upon that remark, he starts ripping apart and throwing presents around the room while still searching for his kids’ gift. Finally sitting down among the presents alongside Naomi, Kendall breaks down and says that “this is so pathetic,” and, “I wish I was…,” but then trails off until taking a beat and finishing with, “home.” But in reality, it’s clear what word he was actually referring to in the pause. 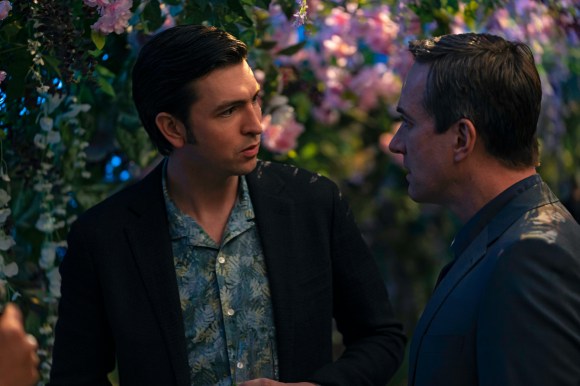 Chipper from Comfrey agreeing to go on a date with him, Greg is walking around a weird garden section of the party where people hiding in hedges give out compliments to the people walking by. The two walk through the garden, but things suddenly turn sour when Tom feels that Greg is being too happy since Tom is the only one who should be allowed to be happy because of the good news about not having to go to prison.

After a drunken stint on the dance floor, Shiv meets up with Roman, who explains that he won’t be telling her about his meeting with Mattson and that if Logan wants to “loop her in,” he’ll finally tell her. Upon hearing this, Shiv is immediately angry and hurt, as Roman once again went behind her back in making regarding company dealings. Shiv tells him that Logan is just using him as his messenger boy, meaning that Logan doesn’t really value him in a real way. Kendall comes by to tell them to leave, but that ends up causing another, larger argument between the three.

Kendall mentions that GoJo was originally his idea, while also adding that Waystar is spying on his kids, which Shiv was completely unaware of. Roman, on the other hand, was totally aware of the situation, which adds even further to how out of the loop Shiv feels; she also tells Roman that spying on the kids is “disgusting.” 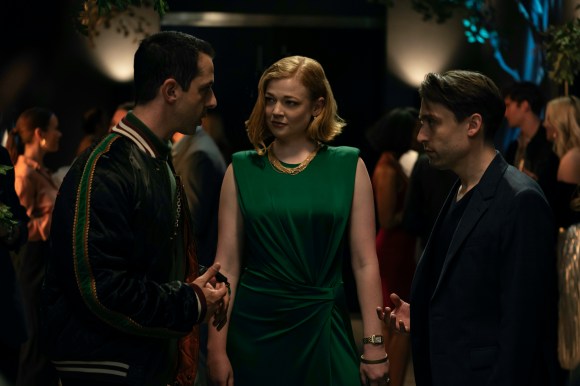 Kendall and Roman start arguing separately, and just as Kendall decides to walk away instead of engaging with him, Roman pushes him hard to the ground, where he lands on his face. Kendall gets up very slowly and walks away, but not before yelling at Connor to remove his jacket.

Back at Kendall’s, he stands out on his terrace, looking down at the city below him. Naomi appears behind him, and the two decide to sit down, with Kendall eventually resting his head on her lap, his eyes seemingly lifeless as he looks out into the sky.