Thanksgiving can sometimes be a bit of a forgotten holiday in the realm of television, given that it’s sandwiched between two other major holidays (Halloween and Christmas) that tend to be given a larger spotlight on the screen. Though there aren’t nearly as many Thanksgiving specials as there are for Christmas, there are still quite a few episodes to revisit in time for the holiday. These next 25 include old-school cartoons, classic sitcoms, comedies, and a few dramas that are perfect for the season.

A Charlie Brown Thanksgiving is practically required viewing each year as it set the gold standard for Thanksgiving specials back in 1973. In this special, the Peanuts group holds a Thanksgiving dinner in Charlie Brown’s backyard with Snoopy and Woodstock cooking up a storm to create a perfectly-imperfect Thanksgiving.

Watch on Apple TV
https://tv.apple.com/us/movie/a-charlie-brown-thanksgiving/umc.cmc.7grdgbjdq3tiy37f4dc3yeyms
2. “Friends”: ‘The One Where Ross Got High’

With too many Friends Thanksgiving episodes to choose from, narrowing it down to one was a tough call. But ultimately, ‘The One Where Ross Got High’ took the crown, with the Gellers coming to town and Rachel making a complete mess of the Thanksgiving dessert. On top of that, an old dispute is settled when Ross realizes why his parents had always disliked Chandler over the years.

With a few different subplots going on here, including the iconic pairing of Mom and Pop stealing Jerry’s sneakers, this episode of Seinfeld has a lot going on around Thanksgiving. One of the main plots, though, involves Jerry figuring out whether he’s invited to Tim Whatley’s Thanksgiving party.

This season 3 episode of Gilmore Girls follows Lorelai and Rory as they navigate the four Thanksgivings that they agreed on attending. Their first stop is at the Kim’s for some tofurkey, and then Sookie’s, where Jackson has decided last-minute to deep fry his turkey. The pair then head over to Luke’s for a meal at his diner, and finally, they end their night at Richard and Emily’s—a much different vibe from that of the rest of their day.

An absolute classic Simpsons episode overall, ‘Bart vs. Thanksgiving’ revolves around a dispute between Bart and Lisa on Thanksgiving regarding how much space Lisa’s elaborate centerpiece is taking up. After the centerpiece ends up being burnt in the fireplace, Bart is punished, but instead of taking his punishment, he decides to run away instead.

Watch on Disney Plus
https://www.disneyplus.com/series/the-simpsons/3ZoBZ52QHb4x
6. “Bob’s Burgers”: ‘Turkey in a Can’

Bob’s Burgers has had quite a few top-notch Thanksgiving episodes, and ‘Turkey in a Can’ is definitely at the top of that list. Bob’s Thanksgiving Day turkeys somehow keep ending up in the toilet each morning as it sits for it’s three-day-brine as part of an intricate recipe. Although everyone in the family denies sabotaging his turkey, Bob is still skeptical and devotes his time to figuring out who keeps putting his turkey in the toilet.

This episode of Modern Family revolves around Cam’s “punkin chunkin” story, which is basically just a memory of when he and his friends slingshotted a pumpkin across the football field back in high school. However, Mitch and the other family members are sick of Cam’s story, which leads to some conflict within the family, as Cam feels like he’s not being taken seriously. Aside from the story, chaos breaks out in getting prepared for Thanksgiving dinner, with Manny creating an awful centerpiece and Haley and Alex denting their mother’s car door.

After Lois realizes that Brian and Peter ate the turkey for Thanksgiving the night before, she sends them out to replace it, but there’s only one turkey left in a store that’s over 50 miles away. After crashing the Prius on the way back from picking up the turkey, the two find various insane ways to get back home.

With everyone having different plans for the perfect Thanksgiving, the group decides to instead join together on the big day to air all of their grievances and put an end to their various conflicts. Because not everyone is as excited as Dennis and Mac are to squash their beefs, different stand-offs occur, delaying and muddling the beef-squashing process.

Carla hosts Thanksgiving dinner for the crew with some frozen food and a turkey that’s taking way too long to cook, with Norm taking over the kitchen duties. The whole meal ends up being a pretty lifeless gathering until a food fight breaks out between the bunch.

Issa and her brother, Ahmal, decide to ditch their usual Thanksgiving plans and do it their own way this year. At the same time, Molly goes back to her parents’ house for the holidays, where she’s obsessively questioned about her dating life. Lawrence instead goes to a Friendsgiving that ends up being more awkward than initially expected.

Although Will, Grace, Karen, and Jack all decide to have Thanksgiving together, they also each need to visit their family for a quick hour during the day. The situation brings the crew to many different locations throughout the day, but most notably to Stan’s prison cell. 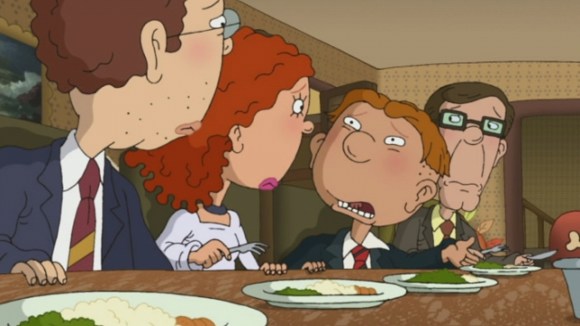 When Ginger decides to give up the last of the 10 remaining seats at the dining room table to her father, it upsets her brother, Charles. If the gathering wasn’t already ruined enough by this, Charles teams up with Hoodsey to buy a turkey and set it free, which causes even more chaos on Thanksgiving. 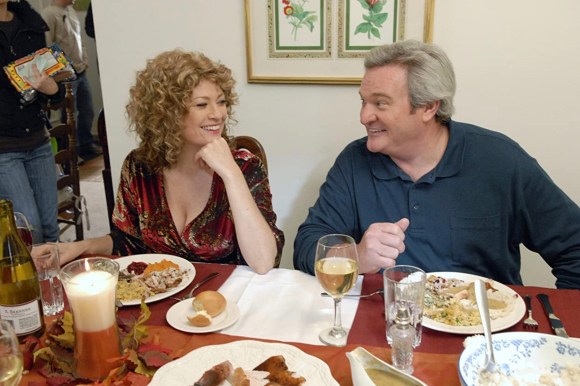 Season 4 of Friday Night Lights wraps up with both a classic Thanksgiving Day football game between the Dillon Panthers and the East Dillon Lions and a Thanksgiving dinner back at the Taylor’s. On top of that, Matt finally returns from Chicago, a timely surprise for Julie and Landry.

When Julius’ more-successful younger brother comes over for Thanksgiving, it throws quite the monkey wrench into things. This gets him into a fit of making sure that every last thing at Thanksgiving is absolutely perfect for his brother.

Unable to have a real Thanksgiving because his grandmother celebrates the Fourth of July on the same day, Arnold wants to find a way to celebrate the holiday in a more real way. Helga is in the same boat, as she’s upset with her family because they don’t like the centerpiece that she made. When the two run into each other after leaving their homes, they decide to create a new tradition on Thanksgiving.

It’s hard to fit Thanksgiving into an episode of The Good Wife given its intricate plot twists and fast-paced nature, but in ‘A Defense of Marriage,’ the show was able to pull it off. Whenever Stockard Channing guest stars as Alicia’s mother, Veronica, it’s bound to be a great episode. Just in time for the holiday, Veronica needs her son, Owen (Dallas Roberts) to perjure himself in a case concerning her will.

Watch on Paramount Plus
https://www.paramountplus.com/shows/the_good_wife/video/NnaVlVIiHjCe47xJ_2mdqYQ4n9Q8bIT5/the-good-wife-a-defense-of-marriage/
18. “The King of Queens”: ‘Thanks, Man’ 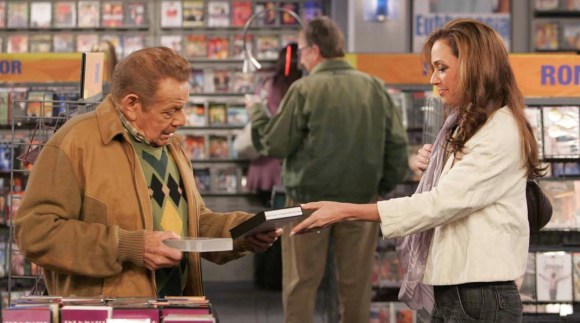 This Thanksgiving episode of The King of Queens involves a stranger, played by Nick Offerman, who shows up at Doug and Carrie’s door on Thanksgiving, claiming that his car broke down. Doug calls out Carrie for being suspicious of the man, who he has just invited in for Thanksgiving. They decide to have him wait outside instead, but when it starts to get cold, they feel guilty and invite him back in.

While this episode isn’t as fast-paced as other episodes of the Rugrats, it’s a must-see to get into the Thanksgiving spirit with its classic themes of the season and a grocery-store ambush. While the kids have a fairly calm day in learning about the history of Thanksgiving, the parents argue over various dinner details, including whether or not to put mustard on the turkey.

Watch on Paramount Plus
https://www.paramountplus.com/shows/rugrats/video/5kC3SnI1jc8xtUfi8J14mTKYnLJfp64B/rugrats-the-turkey-who-came-to-dinner/
20. “Two and a Half Men”: ‘Merry Thanksgiving’

Charlie hosts Thanksgiving at his home, inviting his mother, Evelyn, Jake’s grandparents, and a few other guests over for dinner. Being that this is Two and a Half Men and that nothing ever goes right for Charlie, the whole Thanksgiving meal ends up being chaotic with a few guests making surprising announcements at the dinner table.

An early episode of the show, ‘The Miracle of Thanksgiving’ follows the Tanner family as they navigate their first Thanksgiving without their mother. Although it’s a chaotic day with pumpkin pies being smashed and attempting to cook a frozen turkey, everything comes to a head when family members stop and think about who’s not at the table this year. 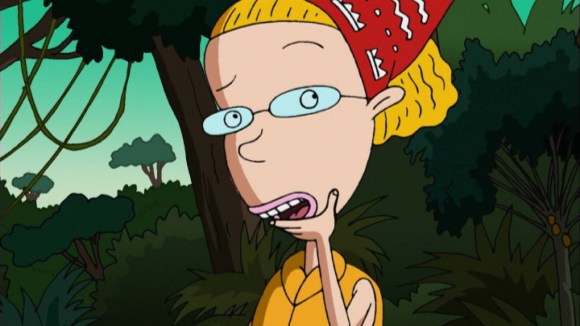 After their grandma invites them to her home in the U.S. for Thanksgiving, the Thornberrys have to decide whether or not they want to split up celebrating the holiday from different locations. Since Nigel and Marianne need to stay in Madagascar to get footage of wildlife, this leaves it up to the kids to decide where they want to celebrate. 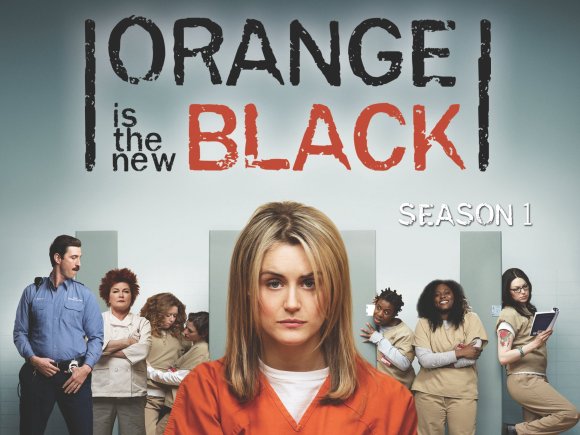 An early episode as it’s in Season 1, Piper is still new to prison and accidentally ends up getting herself into solitary confinement, which stings even more given the fact that Larry was going to visit her. Oh, and the moldy food didn’t help, either. 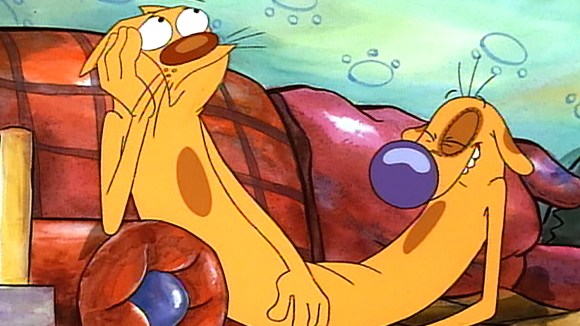 When a turkey named Walt befriends Cat and Dog, he asks them to hide him from Rancid and the others because Thanksgiving is coming up. Cat and Dog rush around their house with Walt attempting to find a good hiding place, but end up putting him in places that aren’t fit for a hiding turkey, like the oven. 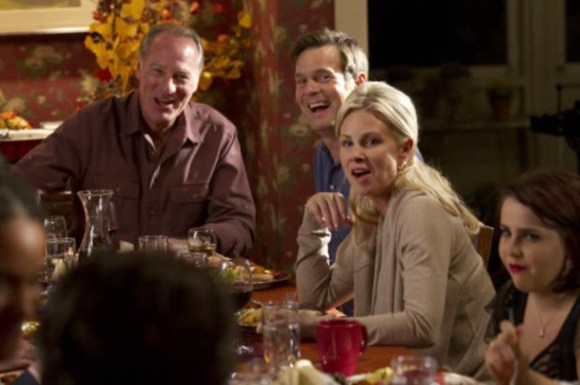 The Bravermans go all out for Thanksgiving, with an astonishing number of varying pies, a jam-packed dinner table, and their annual football game. Amber and Haddie almost switch roles in this episode, as Haddie ends up leaving Thanksgiving early to meet up with Alex and with Amber devoting her entire day to helping out her grandma, Camille.