If there’s one thing you should know about Jon Stewart since he left The Daily Show in 2015, it’s that he’s not laughing anymore. Sure, in his sporadic appearances in the public eye on his buddy Stephen Colbert’s The Late Show with Stephen Colbert, he’s made us laugh and even chuckled himself, but it’s clear that he’s become fed up with the way things are.

Nowhere is this more evident than on his new show The Problem With Jon Stewart, premiering today on Apple TV+. The biweekly program examines a singular issue, diving deep into what makes that something of note and why we should be paying more attention to it.

This format contrasts with The Daily Show, which had segments devoted to a “main story” every night, covered the day’s news, and interviewed a guest. It often left the commentary and fact-telling lacking, simply due to the time constraints of a 22-minute program. On The Problem With Jon Stewart, the host does not have that problem, which works to his benefit.

“Jon Stewart leads with compassion and humor as he takes a deep dive into some of the most enduring, deeply-entrenched issues of our time on the new Apple Original series, The Problem With Jon Stewart. The series explores complex topics through the differing perspectives of stakeholders, experts, and individuals confronting these challenges. The companion series podcast will expand upon the conversation from each episode, featuring staff members from across the show who will have conversations with activists in the space, share facts on the issue, and of course, bring plenty of jokes.”

Apple uses the phrase “bring plenty of jokes,” and there are many to be found, but make no mistake: This is a show much more focused on the issues rather than the humor.

And it’s stronger for it.

Nowadays, Stewart has positioned himself as much more of a progressive political commentator rather than a comedian. He begins the program with jokes and humor, as we are accustomed to before joining a panel of guests that discusses the issue at hand.

In the first of two episodes provided to the press by Apple, Stewart examines War, more specifically the impact that waste disposal burn pits have had on our Veterans. And on the second, he focuses on the notion of “Freedom,” dissecting what exactly that term means in modern society.

Stewart begins that first episode by saying, “In this divided country, the one thing that we seem to be able to agree on is that we love the troops.” He then queues up a video montage that goes against just that, documenting the rampant unemployment, drug addiction, homelessness, and high rate of suicide amongst American veterans.

He investigates an issue that is probably unfamiliar to many of us: How the military gets rid of their garbage. That list of waste includes the following: 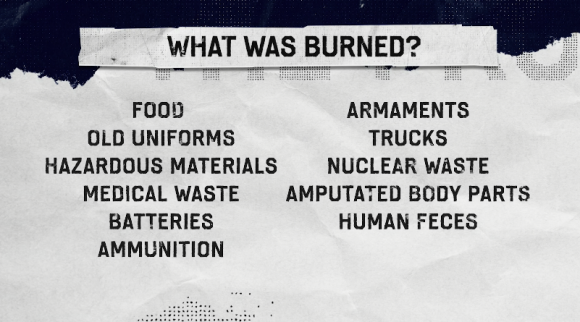 Along with his team of writers and researchers, Stewart unpacks what makes the topic newsworthy and why you need to know about it. In this example, the burn pits have contributed to an epidemic of sorts amongst military veterans, with the toxic fumes produced by that burning waste causing many to develop different cancers, neurological disorders, and more.

Stewart’s skills as an investigative journalist (although I doubt he’d call himself that) are on full display here. He’s always had a remarkable ability to inject humor into serious topics, but you can tell that now he is angry, and he wants to make sure that you know why.

Perhaps it comes from his experiences fighting for healthcare for 9/11 first responders, the last four years under President Trump, or the upending of the entire world due to COVID-19. Still, Stewart has evolved into someone new while also somehow remaining familiar.

The Problem With Jon Stewart is not without its faults; the writing doesn’t feel as focused or snappy as The Daily Show was. Thankfully, much of the focus is on the panels, so this hasn’t become a major issue yet.

If you were a fan of his before this show’s premiere, you’ll likely enjoy The Problem With Jon Stewart. However, it’s best if you go into it not expecting another Daily Show because it’s not that, nor is it trying to be.

The first episode of “The Problem With Jon Stewart” is now on Apple TV+ and new episodes will premiere every two weeks.