There’s a quiet twinge of anger in the empty spaces between tries as Tony Hawk attempts to retire his 900 trick with one last hurrah. Three whole minutes are spent suspended in time, punctuated by slams and skids—but the wheels keep rolling.

Tony Hawk: Until the Wheels Fall Off is HBO’s newest documentary, tracking Hawk through the scrawny days of his youth to the present, where he sits atop the skateboarding throne. Many biographical documentaries fall into a familiar formula: first, briefly touching on the present, then throwing us back to the past and walking us through life up until the modern-day, where the documentary ends. In the same fashion as his video games, this documentary might technically be about Tony Hawk. Still, it’s more about the scene and the emotions rather than focusing on just one person.

The title isn’t even derived from Hawk himself—instead, it’s skateboarder Rodney Mullen’s line, which he very prophetically gives at the end of the film: “But there’s something inside of me propelling; that I’m not going to give up until the wheels fall off.” That same drive led Hawk to land the monumental 900 at the X Games in 1999, yet also that same drive that pushed him to keep going after being repeatedly criticized as a young skateboarder.

As a whole, the documentary was surprisingly emotional given the subject matter, as Hawk gets very frank and admits to the faults he made in his life regarding his children, especially with his first son, Riley. The mental aspect of skateboarding and the lives that trail along with it is normally talked about so little that it seems they don’t even exist. From the outside looking in, skateboarding is a “tough-guy” sport—it’s not for the faint of heart or for those who “can’t handle” it, which Hawk immediately debunks. 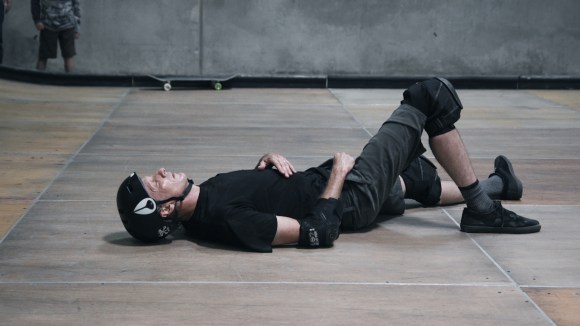 At the same time as this film dissects the more mental side of skateboarding, it also captures the sport both in its heydays and in its slumps. It’s a snapshot of places where the timing just happened to work out—and also didn’t. We’re thrown in with the Bones Brigade (a collective of skaters led by Stacy Peralta) in the early 1980s, which Hawk idolized and worked tirelessly to join.

At least in my head, I assumed that Hawk was instantly a star on the scene from the second he set foot (wheels) at the skatepark. It turns out that he was going through a constant mental battle with himself, always trying to power past his peers’ constant criticisms of his skating style and physique. And if that wasn’t enough, his father threw himself into the sport as well, eventually becoming the founder of the National Skateboarding Association, which quickly became another battle for Hawk. As his father was in charge of organizing the skateboarding contests and events, other skateboarders would accuse Hawk of being given special treatment, regardless of it being false.

It’s that laser focus and innate need to skateboard that kept Hawk going during those periods of inner and outer turmoil. His brother, Steve, recalls watching on as Hawk perfected frontside rock and rolls at Oasis Skatepark as a kid. “He’ll get really pissed off, and then as soon as he makes it, he’s back to being his nice, normal Tony Hawk self,” Steve said. “It was like everything kind of lifted.”

All in all, the film hit all the marks that I didn’t even know I wanted to be hit. The one thing that I would say, however, is that there was barely a mention of the Tony Hawk video game franchise. Now, explain to me how you create an entire documentary about Tony Hawk and gloss over that part of his life and brand? For many people, those games were their first glimpse into Hawk himself as well as the skating universe at large, which definitely qualifies for more air time than just a few minutes.

But aside from that, Tony Hawk: Until the Wheels Fall Off exceeded expectations. At 53 years old today, his name is still synonymous with skateboarding and probably will always be. We all know him, but very few of us actually know him—this film is the perfect bridge to that gap.