We’re less than one month away from the NBA regular season kickoff on October 19th, but this off-season has felt like a long one, especially since last season had the shortest recorded NBA off-season in history.

There may have been some basketball card fatigue during the back-to-back seasons, but we’ve got an exciting list of players and their rookie cards to look at as we approach our first full normal season since 2019.

To help with the analysis, I’ve focused on Prizm Base, Prizm Silver, Topps Chrome and Topps Chrome Refractor rookie cards, which are core flagship rookie card brands that offer a range of price points. 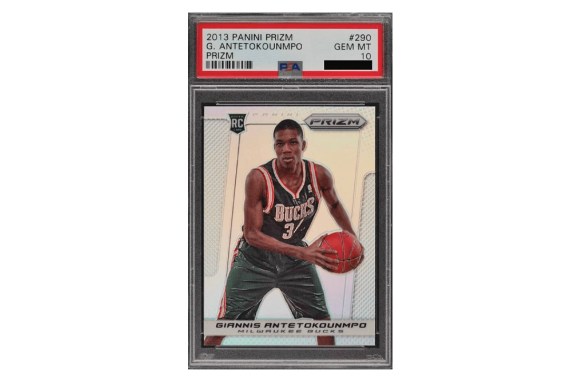 Antetokounmpo is 26 years old and already a five-time All-NBA selection, five-time NBA All-Star, NBA Defensive Player of the Year (2020), two-time NBA MVP (2019, 2020), NBA Champion and NBA Finals MVP for 2021. He also finished the 2019–20 season with a record-high single-season player efficiency rating. In short, he’s one of the most accomplished and exciting young players on the court today.

Despite these accomplishments, his card prices are generally on a decline, likely due to fading excitement after the Milwaukee Bucks won the NBA championship this past season.

Considering his accolades and championship title as well as his cards on a downward trend, Antetokounmpo is the number one player to watch heading into the NBA season.

It may be counterintuitive to buy a player’s rookie cards when they’re declining in price, but given the full NBA off-season and Antetokounmpo’s numbers, he’s likely to make a splash. 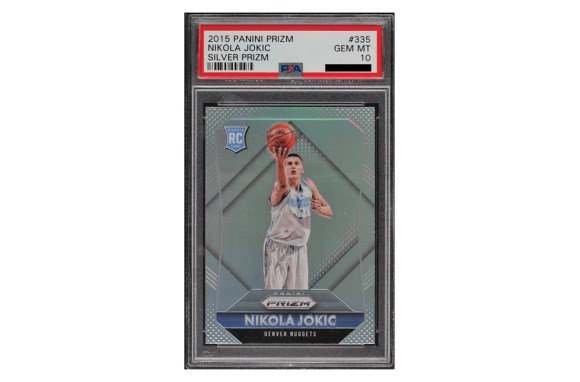 Jokić is a three-time NBA All-Star, two-time first-team All-NBA, and last year’s MVP winner on a Denver Nuggets team that reached the playoffs for the third consecutive season. While the Nugget’s playoff run ended in disappointment after getting swept by the Suns, an ACL injury sustained by point guard Jamal Murray clearly impacted the team’s ability to win games.

With Murray likely to miss the start of the regular season, the team will look to Jokić to play in MVP form until the point guard returns. This will put more attention on Jokić (and likely his card prices) and if the Nuggets make the playoffs for the fourth straight year (they’re currently ranked seventh by ESPN on pre-season power rankings), they’d have a key piece back on their team to make a run at a championship.

Jokić, like many other players on this list, has seen his card prices drop, but given his ability to lead a team that’s getting a key player back this season, his cards are worth keeping an eye on. 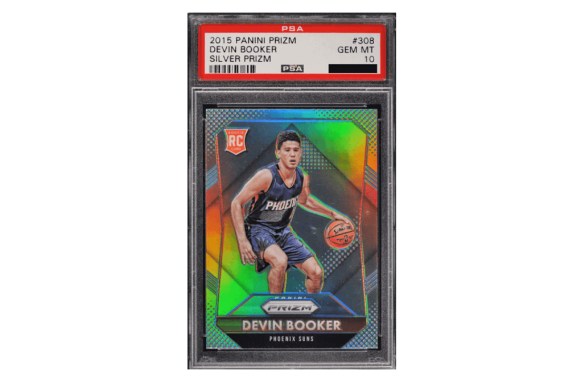 Devin Booker is a two-time All-Star and made his first championship appearance against the Milwaukee Bucks this past season. While the Suns lost the championship series 4–2, they knocked off the Los Angeles Lakers, Denver Nuggets and Los Angeles Clippers along the way.

Booker averaged 27.3 points during the Suns’ 2021 playoff run and his cards have been on the rise as of late.

The Suns will have tougher competition this year in the West, but Booker is the face of a team that nearly secured a championship last season, so his cards will be worth monitoring as we approach the start of the NBA season. 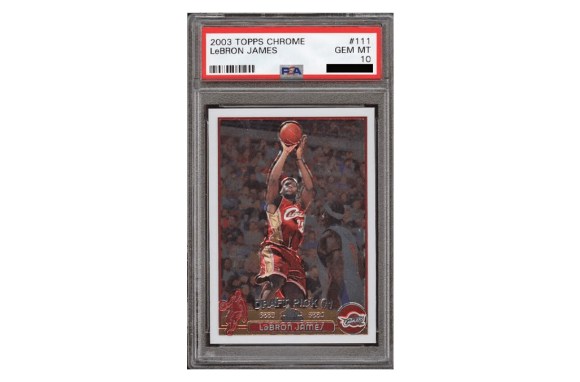 LeBron James is one of the most accomplished players in NBA history, with 17 All-NBA Team selections, four NBA championships, and four NBA MVPs. The Lakers won the 2020 NBA championship, but were knocked out of last year’s playoffs in the first round by the Phoenix Suns.

However, the Lakers have reloaded this season with Russell Westbrook, Carmelo Anthony and Dwight Howard as they eye another NBA championship.

In February 2021, the basketball card market exploded and with it, LeBron James’ rookie cards.

However, the card has been rebounding in value, last selling for $82,410 on August 9th.

Although it’s a long way off from a market high, it has upward momentum and will be fun to keep an eye on as the next season starts. LeBron James already has a legendary career, but the Lakers have a few key new pieces to help them rebound after an early playoff exit last year. 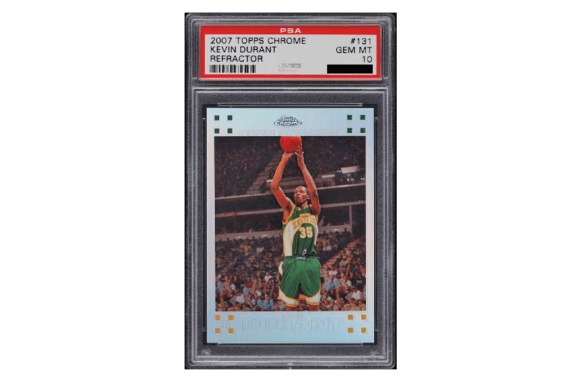 The Brooklyn Nets have been ranked number one by ESPN in NBA pre-season rankings, ahead of the Milwaukee Bucks, who they lost to in the Eastern Conference semi-finals last season.

Durant is an accomplished player. He’s a two-time NBA champion, holds four scoring titles, and is on pace to crack the top 25 list of most points scored in an NBA career. Plus, his team is the favored championship contender heading into this season.

Durant’s cards have been on an upswing as we approach the season, likely due to high hopes for the Brooklyn Nets. 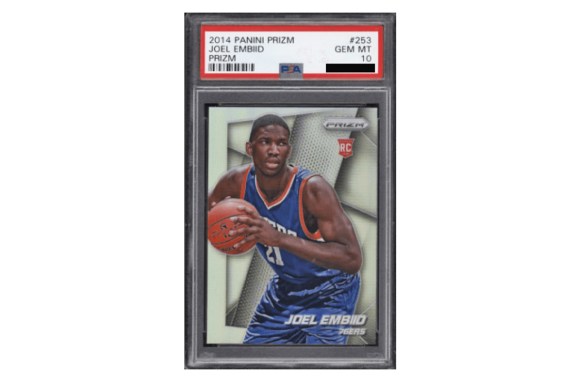 The Philadelphia 76ers are ranked eighth by ESPN in their pre-season rankings, but their off-season has been put in the spotlight with Ben Simmons saying he will not return to the team.

Despite this, Embiid was ranked eighth by NBC Sports on the top 10 NBA players heading into the NBA season. Embiid finished second in NBA voting last season and is a three-time All-Star.

Embiid’s Silver Prizm has been dropping in value, with the last sale at the end of July for $1,970.

The card hit a high price of $5,700 in March before retreating to its current low. There’s some uncertainty with the 76ers going into next season, but Embiid has the potential to be an MVP caliber player on a team that could be positioned to make a playoff run. 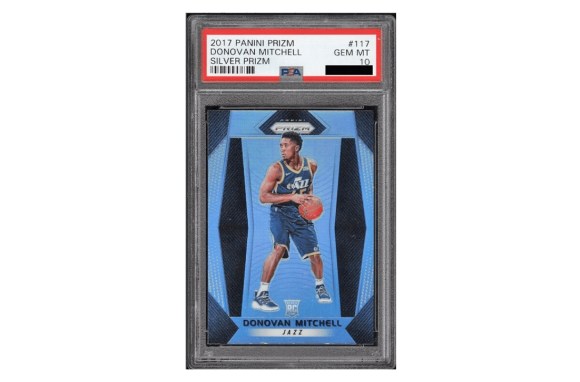 The Utah Jazz are ranked fifth in ESPN’s power rankings heading into the NBA season and Mitchell was dominant in the first two playoff games against the Los Angeles Clippers. While the Clippers won the series 4–2, there’s a lot to be excited about with Mitchell and the Jazz.

Mitchell’s card hit a high price in February when it sold for $591 and shot back up to $421 this past June, but lately, his prices have been declining.

Mitchell was ranked the 18th best NBA player heading into the 2021–22 season and is on a Utah Jazz team poised for another playoff run. 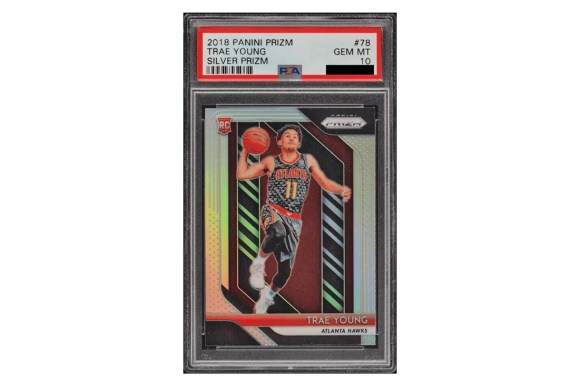 The Atlanta Hawks are ranked ninth heading into the 2021–22 NBA season according to ESPN, and Trae Young landed in ESPN’s 17th spot of top player rankings. Young led the Hawks to the Eastern Conference finals last season, averaging 28.8 points and 9.5 assists during the playoff run.

In January 2021, this card sold for over $800, but given a rising population (10,358 copies at the time of publication) and the NBA off-season, it’s retreated in value.

Young’s performance on the court is undeniable, but the question is whether or not the Hawks can make a championship appearance in a tough Eastern Conference. 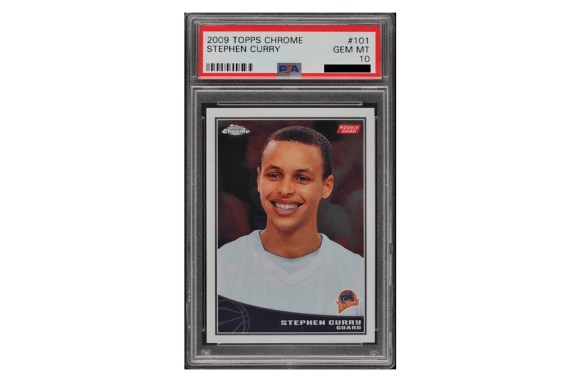 The Warriors finished a disappointing 39–33 last season and did not make the playoffs. Regardless, ESPN has the Warriors ranked 10th for the 2021–22 NBA season, which is largely dependent on getting Klay Thompson back from injury.

Curry was ranked the 13th best NBA player in history and is a seven-time NBA All-Star, two-time MVP, and three-time NBA champion.

Curry and the Warriors are hoping for a better outcome in the 2021–22 season with the return of Klay Thompson and continued development of second overall pick James Wiseman. 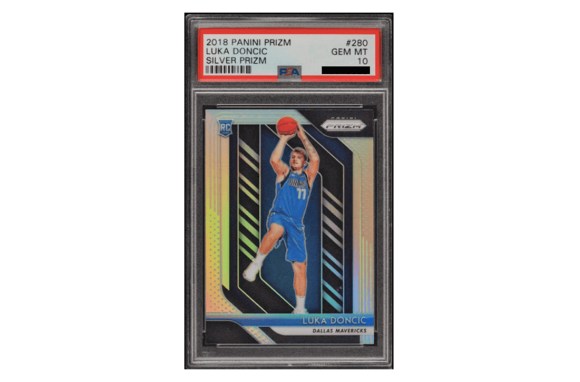 The Dallas Mavericks are ranked 11th heading into the 2021–22 season as new coach Jason Kidd looks to steer the team past the first round of the playoffs. In the past two seasons, the Mavericks were knocked out of the first round by the Los Angeles Clippers.

It hit an off-season low in June when it sold for $4,100. His Silver Prizm has seen some peaks and valleys with the latest sales, but is generally trending in an upward direction.

Dončić is just 22 years old and the fastest player in the history of the Dallas Mavericks franchise to reach 5,000 points. He also edged out Michael Jordan and now holds the record for most consecutive games with 20 points, five assists and five rebounds.

He has a long career ahead of him.