MARVEL Strike Force has done an excellent job of keeping players interested with frequent updates that change aspects of the game and keep things fresh. As of late, there was an update called Iso-8, which was unprecedented in the game’s history.

Iso-8 is essentially a progression system that allows players to add additional powers to characters, boost characters’ capabilities, grant new abilities, create new team possibilities, and customize characters. To do this, you must acquire Iso-8 crystals, equip them, pick a class and then use them.

As expected, this new update changed a lot with the game, lessening the importance of some characters and making some significantly more powerful. If you’re wondering which characters are the most desirable right now, here’s a guide for you. 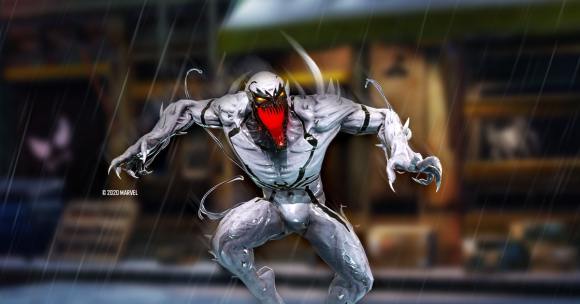 Of course, Anti-Venom is one of the characters that has given players one of the most essential Spidey characters worth investing in. He works especially well with Symbiote Spider-Man and Carnage and to put those three in a team right now almost feels like cheating. If you’re going with Anti-Venom, Striker is a good pick for Iso-8, although again, anything works well. 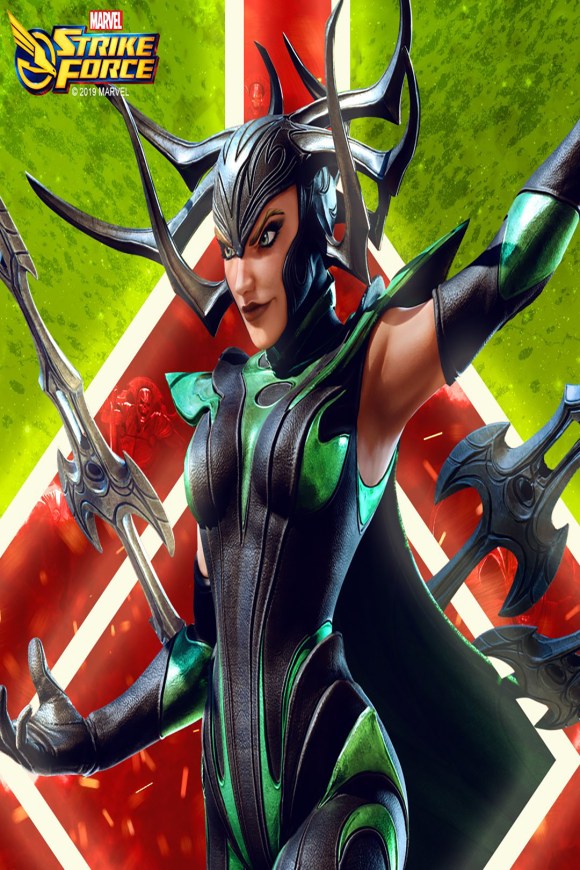 Admittedly, Hela has some weak areas and she can be beaten by some other characters, but the pros she offers vastly outweigh the cons. She’s largely responsible for helping unlock Black Bolt and Phoenix, both of which are other great choices with the current standings (and the former of whom appears later on this list). 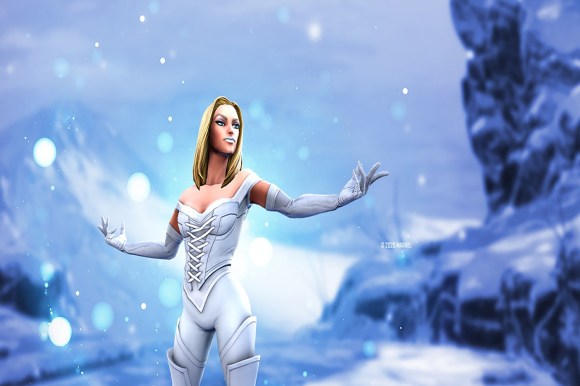 A good pick for Dark Dimension 4, Emma Frost has been one of the best players in the game since the summer. She can heal herself for 15% and that’s not even including her Iso-8 healing abilities. 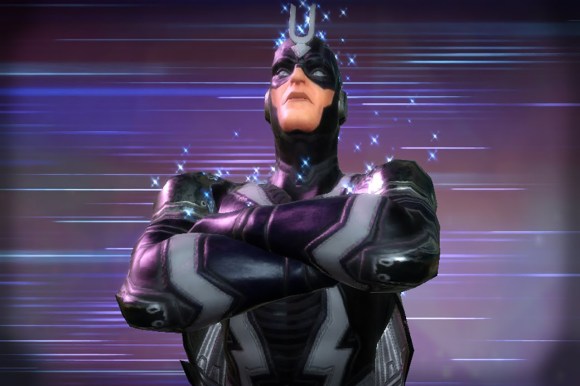 Black Bolt is considered by hardcore players to be somewhat futureproof right now. That’s because he’s expected to pair well with Victor Von Doom and Invisible Woman, but also because he’s a counter to Ultron and he’s a contender for Dark Dimension for some. 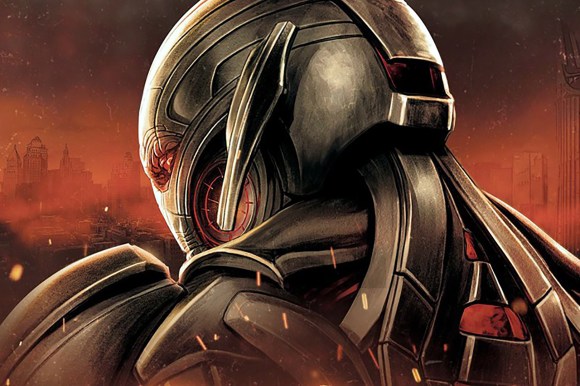 Ultron has had some incredible longevity in the game, being a great option for a couple of years now. He’s still a great choice too. 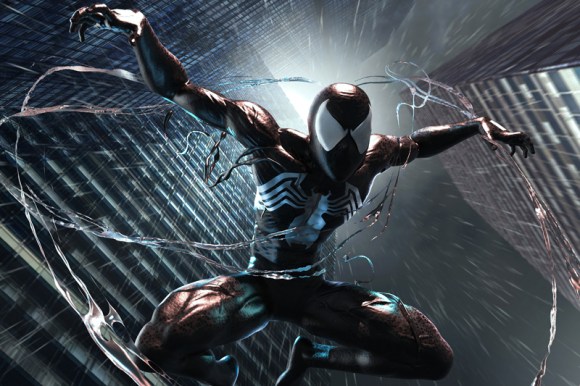 Symbiote Spider-Man is good in raids and Dark Dimension and is easily one of the five best characters for any player to pick right now. As mentioned earlier, he works well with Carnage and Anti-Venom, making probably the best foundation for any team right now. 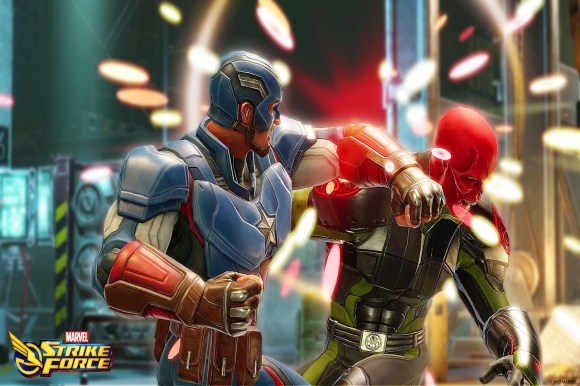 America’s costumed savior and an all-around swell guy is one of the best tanks in the game. Good ol’ Cap’s Shield Bash ability stands out as his most devastating attack, while his Assemble skill gives him a nice boost to his blocking chance percentage. Cap’s Inspire skill is also worth having at the ready for your chosen squad – at higher levels, Inspire has the capacity to lower the ability cooldown period of Cap’s fellow squadmates. Getting access to your other team member’s abilities much sooner after using them is always super clutch. Plus it makes for a great taunt skill. 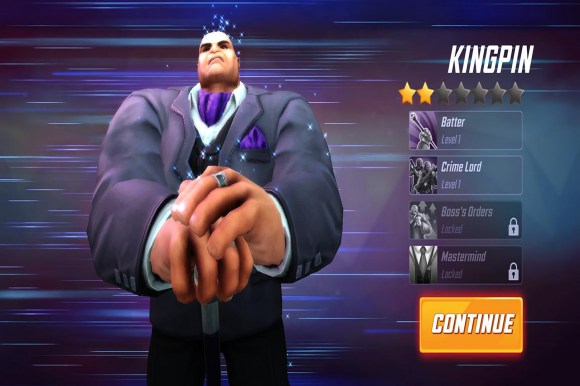 Spidey and Daredevil’s criminal menace may not have any taunt skills at his disposal. But he makes up for that con with a massive pro – his Crime Lord ability lets him summon bodyguards to do his bidding and give your team an extra pair of hands to work with. Kingpin’s Boss’ Orders and Mastermind abilities are also super helpful as team stat boosters.

MARVEL Strike Force was introduced to the world in March of 2018 and its popularity remains at a high today, with the game-changing from season to season with new characters. A turn-based game, it brings together over 100 characters from the MARVEL universe including fan favorites like Spider-Man, Iron Man, and Black Panther as well as characters that are known mostly by hardcore fans, like Crystal, Toad, and Shuri.

Players control a team of five against another team of five and the goal is simple – eliminate the other team. There are five types of characters; Protector, Brawler, Support, Blaster, Controller. Each named character has a basic attack that can be used repeatedly, an ability that requires enough energy to use, and an ultimate ability. While this information might imply that the characters with the best abilities will win, it’s nowhere near as simple as that. You see, different characters have different traits based on their affiliation, skills, origin of power and/or whether they’re a hero or villain. Due to this, chemistry is a key factor and having good synergy within your team is vital.

Balance is key and so different combinations of characters work differently together. Seasonal updates mean things can change on a whim. Differences in game modes mean sustainability across them is a key factor for many. All of this can be extremely confusing so to help, we’ve compiled a list of the ten best MARVEL Strike Force teams you can go with, with details on why. In no particular order, here they are… 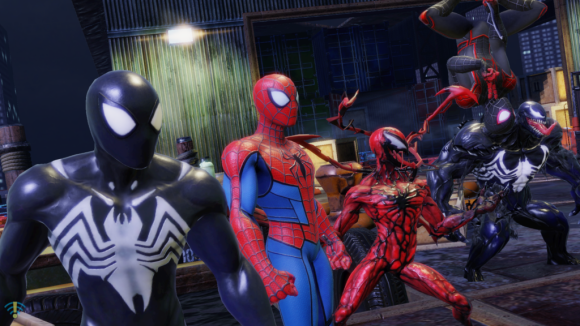 A newer addition to the game, this team, or at least some basis of it with one or two adjustments, has been used to counter the almighty Asgardians and even Hydra in War due to Carnage’s passive ability, Frenzied Fury. It’s probably best to position the team the way that it’s stated above. That’s because Venom is able to take most of the damage from a Brawler’s chain skill. Miles works best in the middle because he only gains an innate evasion while in Stealth and he won’t benefit from any defensive buffs. This team has solid sustainability across multiple game modes too, so you’ll see these characters often. 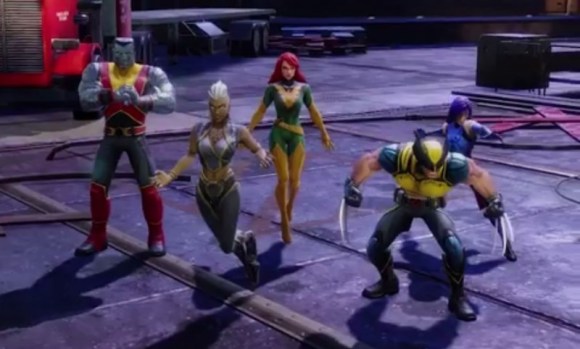 This new and improved version of the X-Men works incredibly well together after the original team proved to provide more name value than anything else in the long run. War Offence is their specialty. Storm slows down enemies and at her best, deals 550% area of effect damage. Phoenix provides support, cleansing, and healing when necessary and is the nucleus of the team with it revolving around her. Ultron’s ultimate ability does a ton of damage, if Psylocke’s DPS hasn’t already done the job, that is. You might see Cyclops replacing one of the members in the team now and again, but these five characters in these positions tend to be the most well-rounded of the bunch. 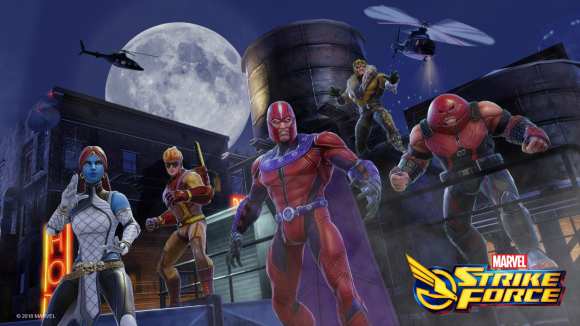 This team is a perfect example of characters whose stats when solo look like nothing special, but benefit greatly from being grouped with others. Magneto works incredibly well with Juggernaut and Pyro as the center of the team, because he gives them additional DPS, and specifically with Juggernaut, he boosts area of effect damage as well. Captain Marvel as the tank is great and of course, Ultron is an absolute powerhouse who appears multiple times on many top team lists, including this one. 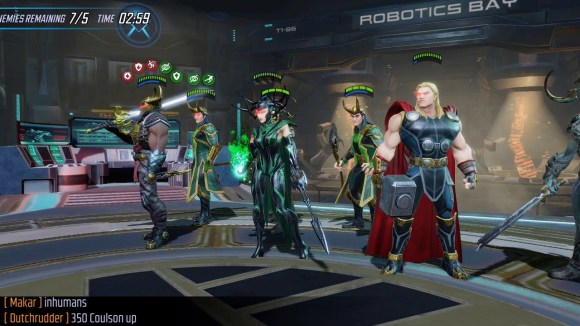 Perhaps the most meta team in the game, it’s hard to put any of these characters or any other Asgardians in positions where they don’t feel powerful. In spite of that, there’s always some tactical thinking that will come into it. Heimdall boasts the most health/armor, so putting him near Sif works well. In an ideal world, Thor’s passive would recharge multiple times per turn, which would mean putting Sif in a corner would make less sense, but that’s not the case. Depending on what game mode you’re playing, this can change. Hela is used in most game modes but this version is best for War Defence. All in all, the Asgardians remain a top choice. 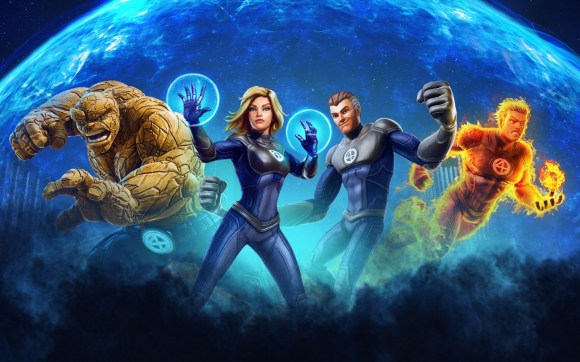 Naturally, different players have their own ideas about who to pair with the standard Fantastic Four squad and while different characters have different benefits and drawbacks, Namor does a great job of boosting their abilities. He increases the squad’s damage by 20% and their armor by a potential 30%. A healer would make them significantly stronger, especially for raids, but until then, this is a formidable group. The cherry on top is that the Fantastic Four are all farmable now, which hasn’t always been the case. 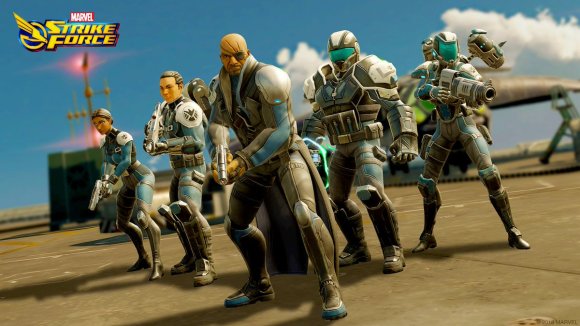 The above team is a great S.H.I.E.L.D. team for Arena Defence but truthfully, the characters and their positions are quite interchangeable. S.H.I.E.L.D. was the original met team when MARVEL Strike Force dropped a few years ago and they’ve gone through some ups and downs over the years, but remain a force to be reckoned with. Agent Coulson’s passive gives 40% additional HP to all allies in addition to full immunity to any debuffs at the start of combat. Fury and minions will always be a great pairing too. 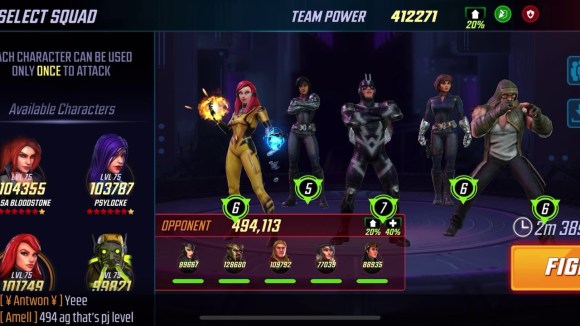 Though this team is well balanced across game modes, where it really shines is War Offence because it can, give or take, eliminate any War Defence team, meta or not. Black Bolt was an addition to the game that had a huge impact a few months ago and is genuinely irreplaceable here. Black Bolt and Yo-Yo especially work well in Dark Dimension III and raids too, although the entire team couldn’t be copied and pasted into either game mode without a little bit of trouble. 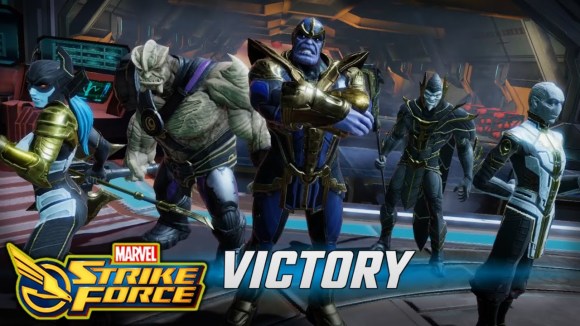 A somewhat new addition to the game that has been rumoured to be joining for a couple of years now, Black Order made a heck of a lot of noise when they were added. This team is going to beat any standard team if used correctly. They’re far from unbeatable on War Defence, but significantly better on War Offence where they’re the meta. They’re also a good raid team. Empowered Thanos is a beast and his speed is upped by the legendary Ebony Maw, who is used in Dark Dimension III and Ultimus 7 here and there. 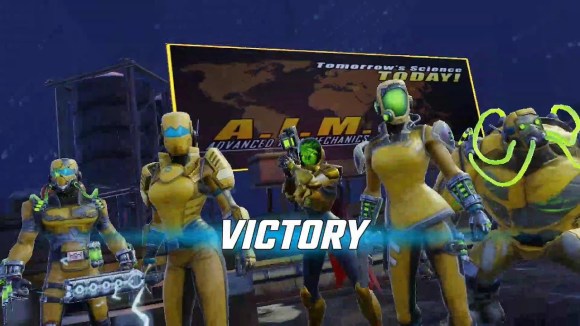 This is one of the better War Offence teams in the game. What you’ll often see is people swapping out Security for a hybrid Ultron-housing team for what has been dubbed AIMtron, but the version of the team listed above is by far the most popular setup around. The team is versatile, with a lot of sustainability in raids, despite not being quite good enough to tackle Ultimus 7. Scientist Supreme is easily the head of the team and is even utilized in Dark Dimension III by some.

The head of the team, Mister Sinister is key here because he gives the Marauders team value outside of War Defence because you often see him utilized in Dark Dimension III, Arena, Ultimus 7 and Greek Raids. We only have the four main Marauders listed here because you can pick just about anyone for the fifth position for good impact. As of late, there have also been rumors of Emma Frost joining the game who would be a no-brainer for the final spot and would presumably do wonders for each character’s ability. 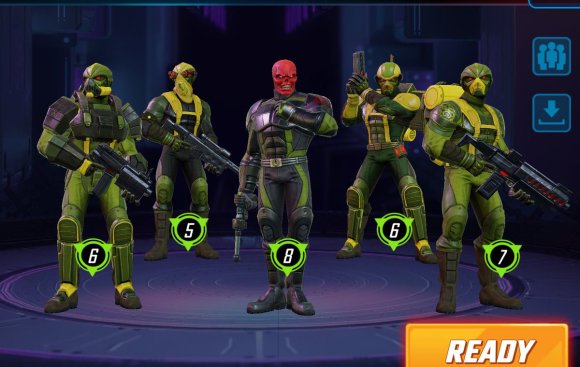 This team didn’t quite crack the top ten because of how one-dimensional it is with most of its value in War, but it didn’t feel correct not to mention Hydra in any kind of MARVEL Strike Force list. Although it hasn’t been considered a top team in the game for a couple of seasons now, it was one of the original metas. Red Skill, Winter Soldier, and Crossbones as a base would be formidable against any team. The other two positions are generally up for debate, with Rifle Trooper or Grenadier also making a strong case to fill either of the two remaining spots. 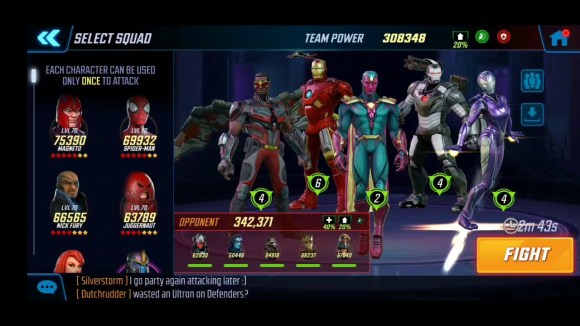 Our final honourable mention, some counters to Power Armour have surfaced in the time that this team has been in the game but it is still a very viable method in War Offence, with this team specifically. Falcon and Vision are definitely the most versatile on the team, used here and there in Arena and Ultimus 7. They’re far from a meta but don’t sleep on Power Armour.

Netflix’s Marvel Series Order to Watch: Binge Every Show Using This Lineup
8 ‘Marvel’s Avengers’ Characters We Want on the Game’s Roster in 2020
How Many Avengers Movies Are There? Your Complete List