Back in 2014, moviegoers everywhere were genuinely shocked by the overwhelming quality of Marvel Studios’ Guardians of the Galaxy. The once-obscure band of galactic misfits became household names thanks to the combined acting chops of Chris Pratt, Dave Bautista, and Zoe Saldana (special shout out to Bradley Cooper for his superior voice acting talents as well). Once the Guardians became multimedia darlings, the video game world obviously took notice. But to everyone’s surprise, Telltale Games adopted the IP to create a point-and-click adventure game (which was shockingly good, by the way). Fast forward to 2021 and now we have a big-budget, full-fledged action/adventure epic that’s all about experiencing the madcap adventures of the whole gang. And to this reviewers’ surprise, it’s way better than it has any right to be.

You’d be forgiven for thinking Marvel’s Guardians of the Galaxy is nothing but a reskinned version of Marvel’s Avengers – it sports a similar art design and comes from the same publishing house that put out the much-maligned games-as-a-service title. But the comparisons stop there – this space-faring journey does things a bit differently in regards to combat, dialogue, audio, and so much more. Guardians’ visuals shine thanks to the wide variety of planets you’ll frequently explore – one minute, you’ll be navigating a lost colony filled with debris from a past war. And the next minute, you’ll be traversing a showy expanse ruled by some vicious wildlife. The graphics also shine whenever you get to navigate the Milano and take in every part of the ship’s architecture. It takes a minute to adjust to the new versions of the human/alien Guardians on screen that don’t look anything like their big-screen counterparts, but you’ll quickly get over that nagging issue once you become more familiar with them and even switch up their attires. Guardians’ looks good and sounds damn good too thanks to the soundtrack that offers sweeping orchestral tunes and 80s jams in equal measure.

Most onlookers lamented this game’s decision to only allow players to directly control Star-Lord. This reviewer certainly felt the same way at first since it seemed like a lost opportunity to not have the ability to hack & slash as Drax or Gamora and pull off some combined brutality as Rocket & Groot. But once you dig your heels into the game’s combat system, you’ll quickly get over that feeling and realize the sort of game you’re playing here. Guardians’ combat system feels like a Marvel Comics take on Mass Effect – you’ll whip out Peter Quill’s dual laser shooters to do big damage as your fellow Guardians fight on their own, plus you’ll get to give them commands to truly take control of the battlefield. Battles start out simple enough – you’ll deal some rapid-fire damage as you use your jet boots to dash out of harm’s way and float in the air for a few seconds while your allies aid you close by.

But as you get deeper into the game, the battle system introduces interesting mechanics that make them even more enjoyable. Peter’s elemental guns let you switch up your approach to blasting, you’ll unlock new special attacks for your teammates that work great in tandem with each other, and even get to power up the whole squad for a limited amount of time thanks to a clever huddle mechanic. The combat system truly shines in wide-open areas as the action becomes more manageable when it comes to crowd control, but it falters a bit in tighter quarters since it gets a bit overwhelming when it comes to keeping track of everything going on around you. Mapping Peter’s special abilities to holding down the left thumbstick also feels a bit cumbersome while trying to activate them in the heat of battle. Yet it feels all too good to light up the battlefield with explosive fireworks and rack up your combo multiplier with well-coordinated team attacks. Guardians’ combat mechanics are strengthened by its mix of active combat and incorporation of turn-based mechanics. 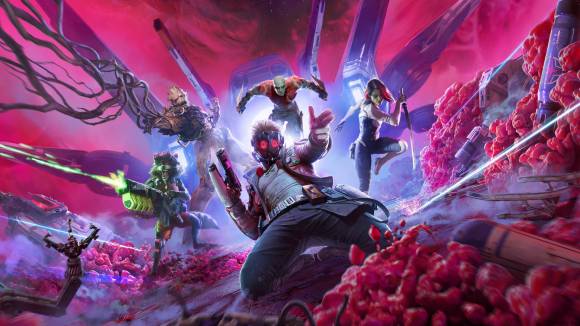 From a storyline perspective, Guardians does an excellent job of properly retaining each character’s likable personality traits and featuring them within a lengthy campaign filled with emotional, hilarious, & extra hype moments. The team’s adventure starts out on a simple note as they look to capture and sell a rare creature that will solve all their money woes. But soon enough, they become embroiled in a galaxy-wide crusade that involves an army of religious zealots looking to fulfill some sort of “promise.” Making your way through the game means you’ll get embroiled in tons of segments that allow you to chat with your many allies during some intriguing conversations.

Randomly speaking with everyone and everything is definitely worth doing thanks to the strong voice acting and different dialogue options you can select in order to sway the conversation anywhere you want. You’ll find yourself going out of your way to pick up random items just so you bring them up during a quick chat with one of the other Guardians in an effort to get to know them better. After beating this game, you’ll quickly find yourself ready to experience it all over again just so you can explore all the dialogue options you passed on beforehand and see how they change up certain moments within the story.

Guardians’ has so much going for it, but it’s held back by a lack of polish. While the game works and plays well, for the most part, the myriad bugs and glitches you’ll encounter from time to time are disappointing. Sometimes, the interactable button icon will stay up on the side of the screen even when there’s nothing to interact with. Peter gets randomly stuck on pieces of the environment, too (thankfully, the game resets you to the ground in that instance). At one point in the game, Drax mysteriously followed me around and stood right in front of the camera as I tried to indulge in some serious convos with everyone else on the ship. Future patches will certainly arrive in due time to remedy these annoying issues and make the game feel more complete. But it’s still pretty lame to see those sorts of mechanical issues pop up at the most inopportune moments.

Marvel’s Guardians of the Galaxy certainly had me and everyone else worried about its overall quality. But after making my way through its well-paced and action-packed adventure, I came away impressed with what’s on offer here. Focusing on a well-made single-player escapade that’s held up by well-written dialogue, energetic combat sequences, surprise cameos, and so much more was clearly the right way to go for development studio Eidos-Montréal. The litany of annoying bugs and glitches still apparent in the final version definitely sucks and needs to be fixed ASAP. But overall, this Marvel Comics game is far better than one might initially think.