Art Blocks is a generative art platform that allows collectors to mint tokens without knowing what they will get ahead of time. The artist writes a code that is plugged into the platform, which will generate different combinations of the variables at random. The creator, Snowfro, came up with the idea when he was claiming CryptoPunks back in 2017, and he thought it was unfair that he got to claim a bunch of zombies. Over the next few years, he sold over 20 zombies to fund the development of Art Blocks.

Much like sneaker drops, project releases on the platform happen at different times featuring different artists. Collectors will then go to the project page and mint the tokens from there, not knowing exactly what they are minting until it is minted.  To date, there have been 13 curated projects and six uncurated projects released on the platform.

Snowfro ultimately sees Art Blocks as a platform where artists can do a drop that would be affordable for collectors that might otherwise be priced out of the artists’ work.

Chromie Squiggle is the project by Snowfro, the creator of the Art Blocks platform. For the purposes of this article today, I will focus on Squiggles. By far the largest project currently on the platform, the 10,000 mints was a number he felt would be good for a long-term project’s health and community.  When discussing why he chose the shapes and colors he did, Snowfro said that he was fascinated with color in general and loved that the squiggles could capture multiple cycles of a spectrum or a very limited segment of the spectrum. The shape of the squiggle itself was created to provide enough randomness so that no two pieces could be the same.

Minting ended to the public in early January at around 9,000 mints, with the rest of the mints to be used as a reserve fund for marketing in the future.  Currently, the only way to buy them is through Opensea.

Below is a table of the different Chromie Squiggle traits so that you understand what each one looks like when you are looking at them.  The cool thing about Chromies is that when you are in the gallery view on the Art Blocks website, and you click the Live view, you can see the colors moving throughout the Chromie. 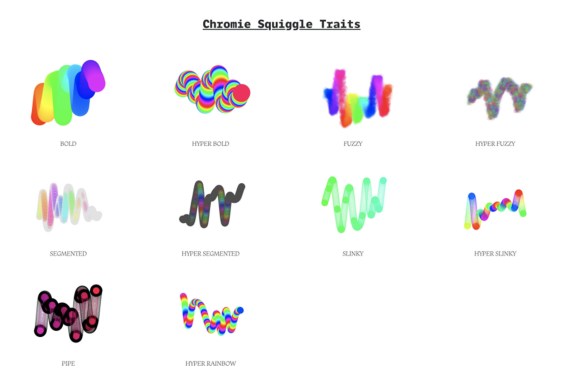 Now that we know the different traits, we can look at how rare each one of those is. In the tables below, we can see the rarities of each trait. Hyper rainbows(121) are the rarest trait, but digging into those, you can see that hyper rainbow combo’s with other traits are even rarer, with the hyper-pipe(4) being the hardest Chromies to find. 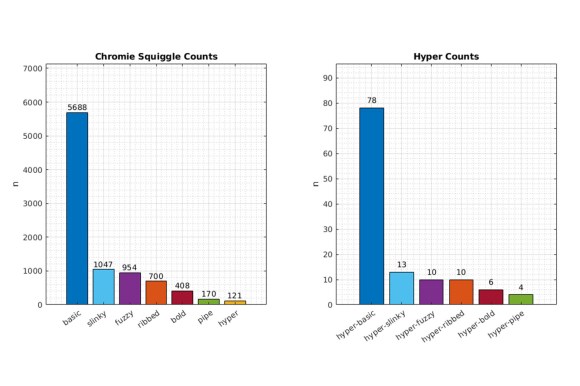 The numbers so far are not absolute, as there are still 911 Chromie Squiggles left to be minted.  So while the rarity numbers will change, this serves as a pretty good estimate of the distribution of each trait.

How to Trade Them

The best place to browse, buy, and sell them is by going to the Art Blocks section on OpenSea. From there, you can scroll down, and you can select the specific drop you want from the left-hand menu so that it filters to that project’s specific pieces.  Once you select Chromie Squiggle, you can then filter further based on the traits you wish to search for.

Chromie Squiggle floors are currently at around .12 eth, almost 3 times the original mint price (($235 at time of this writing). Considering how much other NFT projects have been appreciating over the last few months, it seems that this project may be undervalued. It is the first project on the Art Blocks platform (project ID 0), which is the leading platform for generative art in the blockchain space.

Besides focusing on traits, collectors have also focused on the color spectrum, as well as low mint numbers or important years.

As collectors have initially gravitated towards the initial top-tier NFT’s, many have glossed over Chromie Squiggles because of a lack of understanding. This is giving keen investors an opportunity to get in at great prices.