Colm Dillane, aka KidSuper, is a talented artist with a brilliant mind for eye-catching designs, style, and media. While Dillane consistently has his hands in a multitude of creative projects, he is probably most associated with his KidSuper clothing line and prominent brand collaborations. Originally founded in 2013, the label rapidly gained popularity for its take on modern-day streetwear, becoming known for its combination of style, music, sports, and art.

Since then, the KidSuper moniker has risen through the ranks establishing partnerships with brands such as PUMA while also bringing some of the finest names in the entertainment industry to their Brooklyn studio. To give you an idea of the brand’s explosion in popularity, even soccer star Neymar was recently spotted in KidSuper apparel. In a conversation with ONE37pm’s Tyler Schmitt, KidSuper discussed entrepreneurship, defining the idea of limitations, and more.

In the words of the Notorious B.I.G—it was ‘all a dream’ at first for the KidSuper. Behind that dream, however, was a dedicated vision complete with supreme confidence.

“I was telling my mom the other day that things become possible when you try. We just did a documentary on the very first KidSuper Paris Fashion Show—it has a behind the scenes of so many things going wrong, and then the final project gets ranked the breakout show of Paris Fashion Week. You know, I actually still get asked to this day about why I’m so ambitious. For me, I’ve always wanted to do this. The cool thing about the KidSuper brand is that I’ve labeled it as something where anything is possible. The more random and ridiculous stuff I do—the more ‘on brand’ it is. That was the most genius thing I’ve ever done.”

Recognizing the need for reinvention is an essential tool in the business and entertainment realm if you want to achieve longevity, but with KidSuper, the approach was slightly different. “It was never a conscious feeling of needing to reinvent myself,” he tells Schmitt before detailing the conversation with Puma that led to the creation of SCRAM!—an animated series chronicling the lives of three New York kids. KidSuper’s keen eye for innovation has also taken him down the directing route. 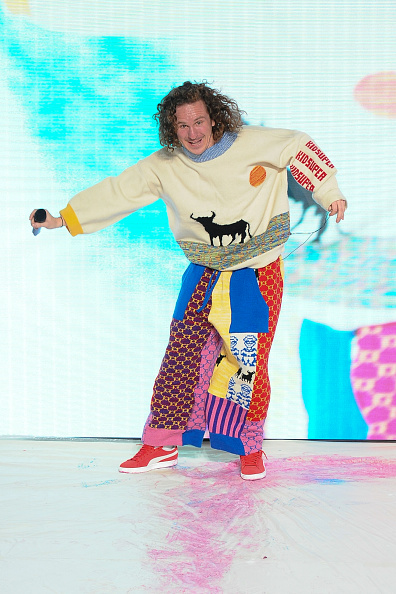 In 2018, he was the creative director for Russ’ music video for the song ‘Cherry Hill.’ A man of many talents, KidSuper continues to blaze through the industry, doing it his way and his way only. “I remember saying I was going to do Paris Fashion Week expecting those around me to be like ‘no you’re not,’ he says before giving a breakdown of the trust he has been able to gain from his team over the years. “I’ve pulled off so many things, like, for example, this Héctor Bellerín shoe—everybody just said congratulations—nobody questioned me!”

While KidSuper has accomplished a lot, it is important to remember that he is still only in his twenties, so the future is very bright. Needless to say, that means many more decades of success for the young creative. As his brand continues to grow and thrive, the key elements remain transparency and dropping gems through mentorship.

“That’s another thing about me. I’m transparent! To compete against these huge brands, you have to be in order to let people into your world, interact with your fan base, etc. That is now becoming the thing everyone is trying to do, but I was always transparent because I knew Nike wasn’t. Growing up, I played soccer—when you’re playing, there is a moment where you lose the fact that you‘re thinking, and somehow you manage to pull something off that you weren’t even thinking about. To me, that is a combination of being super focused and prepared through training.

As far as mentors—I didn’t have a mentor because I never used to ask anybody for anything. I think lowkey I may end up being a mentor before I ever get one! All these little projects that everybody sees now—if you go back to when I was fifteen, you see the ideas there; it’s just that nobody was listening. For me, it was about finally getting the opportunity.”

With more collaborations and designs in the works, you can keep up with all things KidSuper on both Instagram and Twitter. For all of your Streetwear shopping needs, you can visit the official KidSuper website.