When you think about the phrase “More Than Athlete,” there are certain names that come to mind, perhaps none more so than the WNBA’s Imani McGee-Stafford. The WNBA has consistently produced multi-hyphenate movers and shakers who are unafraid to go against the grain and stand up for what they believe in.

One of those leaders is McGee-Stafford—a bold, courageous woman walking with a  purpose, determined to use her wealth of knowledge and experiences to inspire and educate the next generation. A fearless survivor, McGee has been one of the WNBA’s biggest advocates for bringing awareness to systemic racism and injustices, mental illness, and athletes venturing outside of their respective sports to explore other passions. 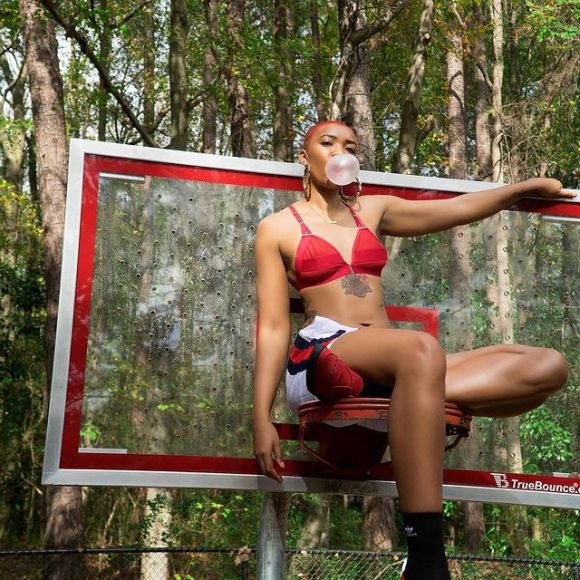 Last Spring, McGee-Stafford announced that she was temporarily stepping away from the WNBA to pursue a law degree at Southwestern Law School in Los Angeles. While the decision was a hard one, the Dallas Wings star considered the move an important next step in her life. One year into her degree, the young law school student, and rising entrepreneur, has spent the better part of this past year focusing on her education and building her fashion career, recently modeling for Honey Birdette and announcing an upcoming lingerie line called Tantry set to release this summer. The ambitious Los Angeles native has also been heavily focusing on her writing career and currently has a four-year proposal set in place to become a lawyer, sports agent, sex store owner, and author, with plans to return to the WNBA after obtaining her degree.

I first met Imani in the summer of 2018 when she was a member of the Atlanta Dream, and even then, it was clear that she was somebody destined to walk her own path. So, as you can imagine, I was thrilled for the opportunity to connect with her again about this current chapter in her journey.

“Well, it all originally started back in 2018 with the Brett Kavanaugh situation. What I do now—I say I’m a ‘hope dealer’ because I like to give hope that it gets better. I kind of wanted to do more whether he is guilty or not because I feel like if you are in the highest power of a job that you can’t be removed from essentially—even the accusation is too much. We had an educated White woman with evidence, and we still didn’t believe her. So, what does that mean for women of color, sex workers, and uneducated women? I was like, ‘what can I do to really move the needle?'” 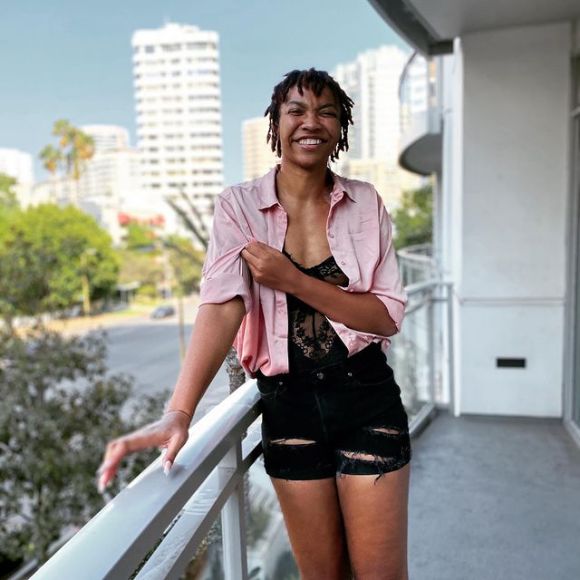 “Law school felt like the most realistic thing, and I have a four or five-year plan. I started looking into schools, and I thought I would be playing, but then Corona happened. I was playing in Australia, and we didn’t know if we were even going to have a season. I only applied and didn’t know if I was going to get in. I wasn’t worried about it, but I got in with a fifty-percent scholarship. I had to decide about school before the WNBA made their plans, and I was nervous. I thought my agent was going to cuss me out, but he was like, ‘Go to law school!’ I called my team (Dallas Wings), and they told me they were going to keep my contract, which they didn’t have to do. I didn’t realize how much I would miss basketball, and it’s been a big transition, but it’s been a fun journey. Stressful, but fun!”

Oftentimes, lawyers (or people involved in law) display certain personality traits early on. They may love to argue/debate or be extremely passionate about certain cases they see on the news, but that wasn’t the case for Imani. “No! I am the living example of God laughing when you make plans because I didn’t even want to play pro basketball, but my mother has been telling me I was going to go to law school since I was a kid because I’ve always been very contrarian and bullheaded.”

Southwestern wound up being the perfect fit, and McGee-Stafford has been hard at work during the past year under an accelerated two-year program.

“Originally, I was looking at four-year programs in women’s gender and sexuality studies, or women in gender studies, and I was going to continue to play and go to school during the off-season. Then reality set in, and I realized it wasn’t going to be possible. I went to a law school fair at USC on my list because the schools on my list were there. Southwestern was on a panel, and the two-year program is very unique—I will be able to take the bar in two years instead of three. Southwestern is really big in the public interest, and I want to do public interest—it was just a perfect fit!”

The Covid pandemic has been such a strange dynamic—it has caused so much pain and turmoil, but at the same time, it has allowed people to reconnect to themselves and embark on new paths. Sports came to a complete halt in the spring of 2020, and many people (including athletes) had to find other opportunities or different ways of occupying their time.

“I think when the pandemic first started, there were a lot of people saying things like ‘If you aren’t hustling, you are doing it backward,’ but I think it also gave us a break. It gave us perspective because it is easy to be on the go, and this made everyone pause and ask ourselves about our mental health and how we were going to take care of our families as well as what we were going to do if our primary jobs were not available. I probably would not have pursued law this soon or full-heartedly. It’s crazy how much difference a year makes.”

And while McGee-Stafford is very much her own person, seeing players such as future Hall of Famer Maya Moore leave at the top of her game to fight against injustice might have made her tough decision a little easier. “For sure! Maya is one of the best ever, but she is also very private. She didn’t announce anything—she just took that leap of faith. Maya, if you are listening, please come play basketball again! No, really, we miss her, but watching her journey and seeing her get a happy ending really did the ultimate in terms of laying her job on the line and fighting for something that was bigger than her. She did that before Kapernick! Shoutout to Kap, but Maya started before!”

So now, halfway through her program, the young student finds herself immersed in her studies most of the day—though it can get a little difficult due to the program being solely online.

“I literally sit at this desk six hours out of the day. I wake up and go over my notes, and I’m trying to figure out how to get my workouts in as well. Even though we are online, our classes are live. There are four black kids in my law school class, and the majority of us are having a hard time because most of the people in our class know a lawyer or have family members that are lawyers—the cultural barrier is very much real. Being at home and embracing yourself in the language has been very hard because if you have never been a part of the law, it is an entirely different language. They aren’t teaching for us, they are teaching for the people who don’t look like us, so I have kind of struggled being at home. Luckily California lowered the score for passing the bar, but it’s definitely an uphill battle.”

McGee-Stafford has been embarking on her aforementioned four-year plan, which is full of goals that she wants to accomplish before turning 30. While law school is the primary focus at the moment, a career in fashion is also in the works.

“30-year-old me has her stuff together. I’m not sure if all of it will come to fruition, but I am a firm believer in manifestation and speaking it. As far as fashion—I have a lingerie line coming out, and it has been so cool seeing it come to life.

I feel like everyone deserves to feel sexy. I’m not the sexy kind of girl—I’m more of the quirky, pretty girl. My management literally called me like, ‘Can you please be cute today?!’ I’m always in sweats, but when I was playing in Australia, I really got into lingerie, and I had a long-distance boyfriend, so I got into dressing up when I saw him. I really like how lingerie makes you feel sexy, and the problem with being 6”7 is that nothing fits me correctly! That stuff was either crazy expensive or didn’t fit me properly, so I decided that I was going to do it myself! It’s called Tantry, and I really enjoy it!”

Women aren’t allowed to be sexy all the time, especially women like ‘me.’ We are always forced to pick a side, and I think that’s not fair! My line is all about feeling sexy and comfortable in your own skin. With modeling, I have been trying to break in for a little while now. I started a couple of years ago, and it’s been cool to see my progression. I wasn’t the photogenic kid, and my parents always got mad at me on picture day! I enjoy the creative process, and I definitely want to be at New York Fashion Week!”

As busy as she is, basketball is never too far away for the law student/fashionista, and she couldn’t be more proud of her friends and colleagues during last year’s difficult campaign in the bubble.

“I’m so proud of my sisters! I was very much one of the people that voted against having a season this year because I thought it was going to be hard to maintain the momentum we built—especially in a bubble. The way that we put it all together—there was no reason to miss a WNBA game. There was a game on national television every day, and there was a moment of silence before every tip-off. To do all of that in two months under conditions that were definitely different was amazing!

I’m always involved in our players’ association trying to make things happen. This is what I am and what’s in my blood. I’m forever about this league and pushing for it. A great part of being in the WNBA is that we aren’t afraid to have these conversations, even with people that aren’t necessarily the most vocal. My college teammate Ariel Atkins, who is a champion with the Mystics, has never been comfortable speaking in crowds, and watching her orchestrate conversations and take the mic after games, was amazing seeing the growth she had.”

As we approached the end of our conversation, I had one final question for Imani: What does she want the world to know about her the most?

“I think my whole purpose in life is to encourage people to be their whole selves. I’m a hot mess majority of the time—and that’s okay! I’m 26, still learning, and I’m real! I want people to come on this journey with me, and hopefully watch me fall and get up. I want to give people a little more joy in their lives!”

WNBA History: How The League Has Grown
Monte Morris: A Man Focused on Building His Legacy On and Off The Court
The 10 Best WNBA Players Of All-Time