Jason White is a name that the cannabis industry will soon know.

For five years, while Apple owned the company, White was vice president of marketing for Beats by Dre. In 2016, he then graduated to the global head of marketing. White worked with LeBron James’s “Re-Established” campaign that marked his return to the Cleveland Cavaliers in 2014 and got Beats by Dre headphones on three of the top four picks in the 2015 NFL Draft.

For years, White’s job was to make Beats irreplaceable in popular culture, and his efforts helped Beats command 46 percent of all the money spent in the U.S. on wireless headphones in December 2016, according to Statistica. That marketplace share was more than 20 times larger than its parent company’s Apple AirPods demand. White was dominant but wasn’t fulfilled.

“Beats was starting to become a mature brand. We were competing with Apple AirPods in the headphone space. I was at a point in my career when I wanted to do something creative,” White told ONE37pm.

For White, owning market share dominance and working at one of the most successful U.S. companies in history wasn’t enough. While he loved his time at Beats, White says he didn’t always feel a perfect alignment with his purpose in life and the work that he was doing. It wasn’t until he came on as chief marketing officer of Cura Partners in February that he felt complete. “For the first time, I was able to put purpose and profession together,” he said.” 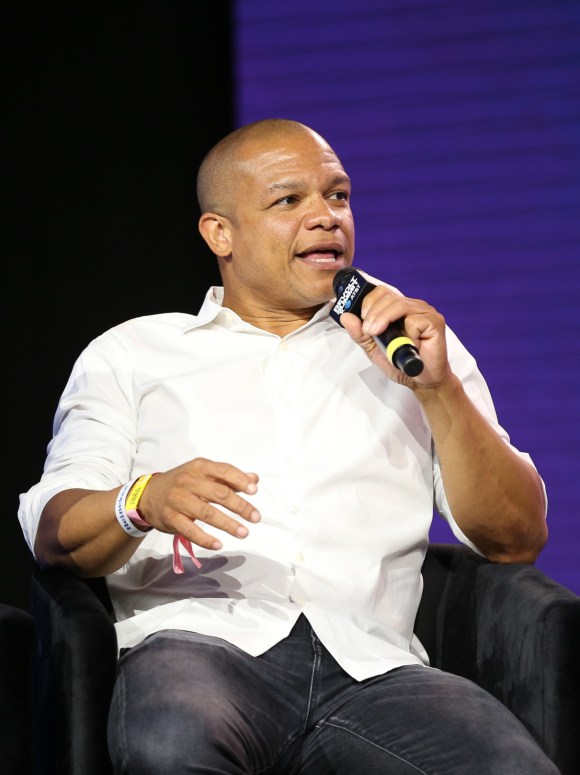 The legal cannabis market is booming in the United States, but it’s still young. There’s no McDonald’s or FashionNova of cannabis, where the brand is more known than the product it sells. That’s primarily due to the growing pains of an industry that isn’t entirely legal.

California alone is on pace for $3.1 billion of licensed cannabis sales in 2019. However, recreational cannabis use, sale and possession are still illegal in more than 60 percent of the United States. That fragmentation precludes even the most prominent cannabis brands from advertising on a national scale and developing large-scale brand recognition.

White saw those hurdles with Select. There was an apparent demand for the product, but customers didn’t know the necessary details about the company, like its place of origin. So, White decided it was time for Select to give the world its origin story. In the first advertising push under White’s tenure, Select shot a commercial of fewer than two minutes, breaking down how the company was formed. There were no celebrities, just real Select employees, the Select co-founder Cameron Forni, some professional actors and a few choice cameos of the cannabis plant.

“At Beats, while everything had a famous artist or athlete attached to it, we never wrote the strategy around them,” White said. “The strategy was about the brand, what we stood for and the product we made. Then, we would choose the talent and music.”

The Select commercial may lack the star power of a typical Beats commercial, but White’s marketing plan is reminiscent of his disruptive ways at Beats. He plans to show Select’s origin story as a preview in cinemas across 800 screens in California. Select chose California as a home base for cannabis’ legal status in the state and will only show the commercial before R-rated movies because they believe most of the audience will be over the age of 21, the legal age to possess cannabis in California.

“We said, ‘Let’s go find places that don’t feel like cannabis places.’ Let’s go find places where the everyday consumer will be spending their time and could be our next consumer,” White said. “They may not be listening for a cannabis message. So, let’s go find them when they are stuck and looking to be entertained.”

The idea to put a cannabis commercial in movie theaters when that content is barely allowed on television or Facebook is the sort circumvention of circumstances that those who have done it before think up, and the sort of mind ambitious enough to disrupt the NFL draft.

Beats by Dre: Innovation by Any Means

In the 2015 NFL Draft, Jameis Winston, Marcus Mariota and Amari Cooper were drafted first, second and fourth, respectively. Top draft picks receiving their onboarding call is customarily televised on a live broadcast, and nothing was different for the 2015 NFL Draft. That’s a lie. There was one thing that changed: Jason White.

The three players took their calls from home instead of the Auditorium Theatre in Chicago, where the draft was held. Each player, sponsored by Bose headphones, answered their life-altering calls by speaking into a microphone attached to their Beats by Dre’s Powerbeats2 Wireless headphones. The players didn’t make any unnatural gestures or thank Beats by Dre—each athlete seemed authentic. This disruptive marketing parallels the decision to put cannabis commercials in movie theaters.

According to White, the story goes that one day in 2015, the Beats by Dre head Jimmy Iovine was frustrated that people are only using the Powerbeats2 as headphones. He wanted the customer to know that the product could also host phone calls. To Iovine, the Beats marketing team needed to facilitate a shift. So, the idea to have Marcus Mariota, the Oregon star, take his draft call while wearing the Powerbeats2 was conceived.

At first, Mariota was reluctant. The Hawaiian-born athlete wanted to take the call at home and didn’t want to turn a sentimental moment in his life into a commercial. There’s an almost indiscernible line between commercialization and cultural immersion that brands have to toe. White turned that line into a starting point.

The time White and his team spent with Mariota’s community helped them be the only camera crew besides ESPN in his home when he took his call. The idea was passed along to Cooper and Winston, and Beats’ draft day trifecta was complete.

Every step that the cannabis industry takes is shrouded in black clouds and built on the backs of people of color, who are disproportionately incarcerated more for cannabis-related offenses than their white counterparts. According to the data compiled by the American Civil Liberties Union, African Americans are almost four times more likely to be arrested for cannabis-related offenses than white people. Even with legalization sweeping the nation, there’s a nearly impenetrable racial barrier. In 2017, 81 percent of cannabis business owners were white, according to Marijuana Business Daily.

Educating the public on cannabis is essential for all businesses to remove negative perception, to entice new customers to buy and to encourage lawmakers to lower the legal barriers. It’s willfully ignorant, and frankly, lousy business to educate on cannabis without, at the very least, addressing the racial inequities central to the industry.

White sees the cannabis industry as a perfect merger of his passion and his purpose. Within six months of joining the Cura Partners team, White helped launch the Possible Plan, a nonprofit that aims to fund companies that ensure access for people of color to the cannabis industry. It also helps those unjustly affected by past cannabis laws.

The Possible Plan is working to help people with low-level marijuana convictions, expunging their records through “expungement clinics.” Held Dec. 17 in Baltimore, Possible Plan and cannabis activist Steve Diggs of Bmore Power Foundation held a public event to help people enroll for medical marijuana cards. White does not want people of color excluded from the booming cannabis market, but he also wants them to look further.

“We don’t talk to young people of color about why they should get into the industry. It’s always about equity and reparations, or it’s about ownership,” White said. “But, for a coder living in Oakland, there are so many opportunities. We don’t have great PLS systems. We don’t have social media popping yet. We don’t have apps yet.”

White stresses that in an industry so young, people of color should take advantage of this influx of new companies continually entering the market that are eager to hire and build. Leafly, a popular cannabis website with more than 15 million monthly visitors, put out its 2019 Cannabis Jobs report in March. Leafly estimated that there are 211,000 full-time jobs in the cannabis industry, and the market experienced a 110 percent growth in employment over the last three years. More than half of those jobs were for technical positions such as lab workers, accountants and marketers. “I don’t want this generation of people of color missing these opportunities by waiting for an equity license to own their dispensary,” White said.

The Future of Cannabis 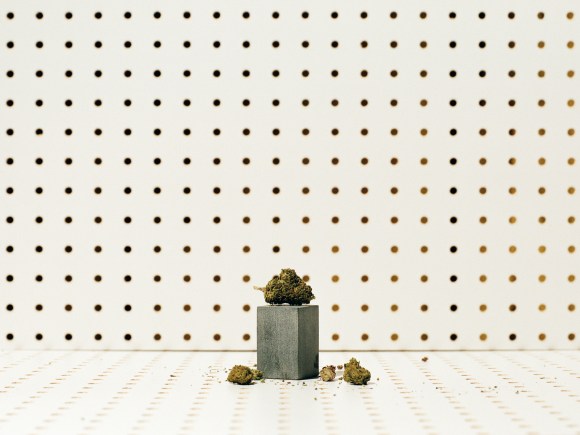 For the Select brand, the first half of 2020 will be focused on communicating what the brand represents and its story. Even though White said the company wouldn’t start by leveraging celebrities, he attested to entertainment and music as a critical part of helping the brand’s image. “We’re going to make sure we’re around music’s biggest moments,” he said. “People understand that this is a global, cultural brand that shows up naturally next to Samsung, Nike and Beats.”

The brand will also be launching new vape cartridges and hardware in the new year. 2020 could mark the watershed year when cannabis is legalized on a federal level following the House Judiciary Committee’s approval of a bill in late November, removing marijuana from Schedule 1 of the Controlled Substances Act. This approval comes two months after the House of Representatives passed legislation that legally protects banks that work with cannabis businesses.

Select is available in eight states after recently expanding into Colorado, Maryland, Michigan and Oklahoma. What happens over the next few years for the cannabis industry is anyone’s guess, but you can expect White to be there.

“I don’t know if Apple Watch will one day figure out the right music for the kind of weed you smoke,” White said. “I don’t know if Nike is going to use hemp to make sports materials because it’s saving water and the planet. I’m certainly going to make sure those things are part of the conversation of innovation.”

These Are the Most Impactful Cannabis Businesses of 2019
Meet Besito, the Cannabis Company That Places Awareness High
Boston Mayor Martin Walsh Sheds Light on Cannabis Legalization in Massachusetts