After only two hours of sleep and a flight that was delayed five times, Lolo Jones is all smiles when I accompanied her at a glutes class at Life Time Fitness in New York City. Right before grabbing for her weights, the track star opened her Instagram app to go Live. That’s what Jones does. She takes her fans everywhere with her, documenting her day, venting about her nonexistent dating life, and giving them firsthand looks at her workouts. Meanwhile, I couldn’t fathom showing my followers a sweaty and tired version of myself, so I snapped a pic of Jones instead. 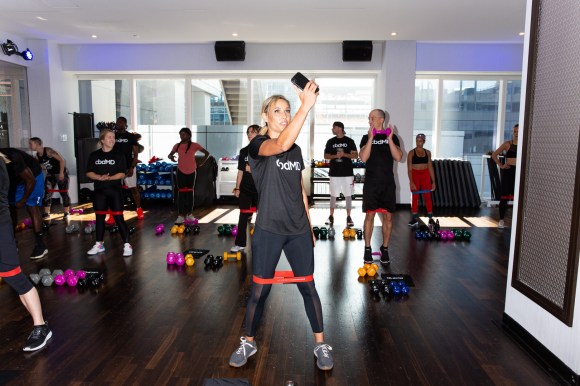 If you hadn’t grown up loving sports, you’d never know Jones was a prominent celebrity upon meeting her. Her genuine and natural aura made me forget I was on the job—I felt like I was catching up with an old teammate. Thirteen years my senior, Jones dominated every circuit of the class, leaving me to tap out before the session ended. Drained from her overnight flight, a strenuous workout and two previous interviews, she still found time to chat with me—benevolently, I must add—about training for the 2020 Olympics and what she’s been up to over the years. 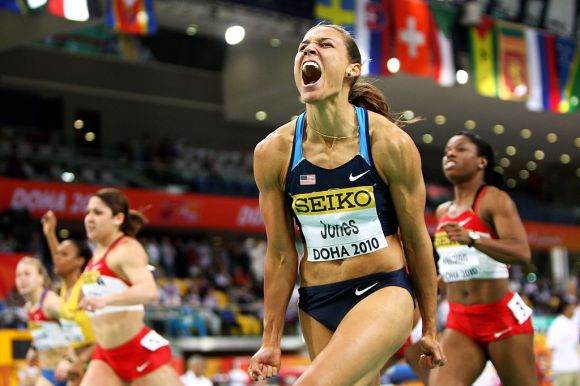 When most people hear the name Lolo Jones, they picture the strikingly beautiful LSU grad-turned Olympian hurdler. Others might imagine a brake-woman on the U.S. Women’s National Bobsled Team. Few will think of an underdog.

The story of Lolo Jones is one that would never be assumed of such an affluent and successful professional athlete. Growing up in a single-parent home in Des Moines, Iowa, Jones attended eight schools in eight years. Her mother, Lori, who she is named after, worked two jobs, while her father spent most of her childhood in prison. From the church basement of a Salvation Army to the homes of four different families during high school, Jones was no stranger to adapting to new environments and adjusting to penurious situations.

In high school, she received her first pair of spikes from a stranger. That day marked the beginning of what would turn into a long-lasting career. From first setting a high school record in the 100-meter hurdles to representing the United States at the 2008, 2012 and 2014 Olympics, Jones has never been known to let setbacks deter her grind. 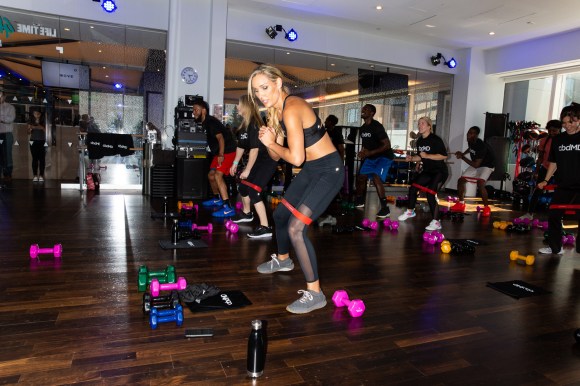 Today, at 37 years old, she is training for a spot at the 2020 Olympics for track and field. Her personal routine involves comprehensive diets and unique workout plans. Alongside challenging herself in the gym and only consuming well-balanced meals, Jones swears by her usage of CBD. Just made legal for Olympic athletes to use in 2017, she’s found success with CBD in treating her inflammation and pain from injuries and workouts. “I had really bad whiplash and couldn’t sleep at night. I was always in a lot of pain,” Jones tells us. After spending months of trial and error and reading through reviews, she finally came across a CBD brand that she could trust, CBDmd. “My body is my livelihood,” Jones said. “It’s what gets me medals and placements on teams, so I can’t just promote a product for monetary gain. I’m not going to voucher for something if it doesn’t work.”

Currently recovering from a torn PCL, Jones tells me of how she hopes CBD oils and creams will allow her to bounce back in time for one last Olympic run. As a double-athlete, her body has undergone major changes in preparation for her competitions. Many athletes won’t pursue differing sports for this reason. “In track, it’s like I’m trying to be a wide receiver, and in bobsled, I’m trying to be a linebacker,” Jones said. “To push a 400-pound sled, I had to gain 20 pounds, focus on my squats and strength, whereas for track, I’m focusing more on my speed and being light.”

When I asked her about competing against women half her age, Jones’ playfully stopped me in my tracks: “Wow, am I already that old?” Unlike young sports like tennis and gymnastics, most hurdlers make their first Olympic team at age 25. Going up against women ten years younger than you can be intimidating for obvious reasons, but Jones never lets the uncertainty last too long. “When you’re at the start line facing girls who are so much younger, it can be hard to get motivated,” Jones tells me while reaching for her weight. “It’s obviously easier when you’re younger to bounce back quicker, so you have to drop the idea of comparison. There’s no benefit in comparing your body to someone else’s.” 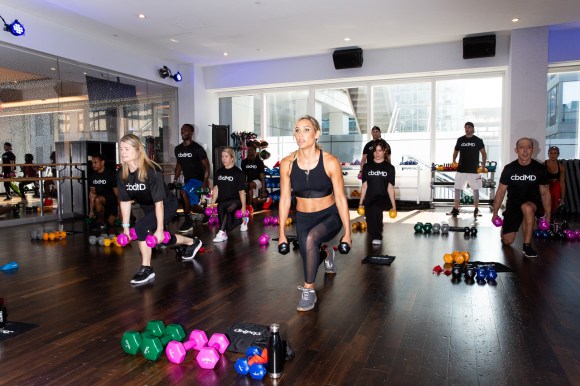 There’s no doubt Jones has to work harder than her younger rivals. She’s had three surgeries since running professionally, been crashed in a bobsled multiple times and has hit hurdles throughout her career. Over time, she’s noticed it’s become harder to get her body to rebound, but that seems very unlikely for someone so toned and energetic, year-round. In addition to using CBD, Jones thanks social media for keeping her profession alive. “Social media has elongated my career because it allows me to connect with fans better and it gives me a platform to show them what I’m up to,” she said. “Before social media was a big thing, Olympians were only in the spotlight every four years. Now I’m able to keep my fans in the loop.” 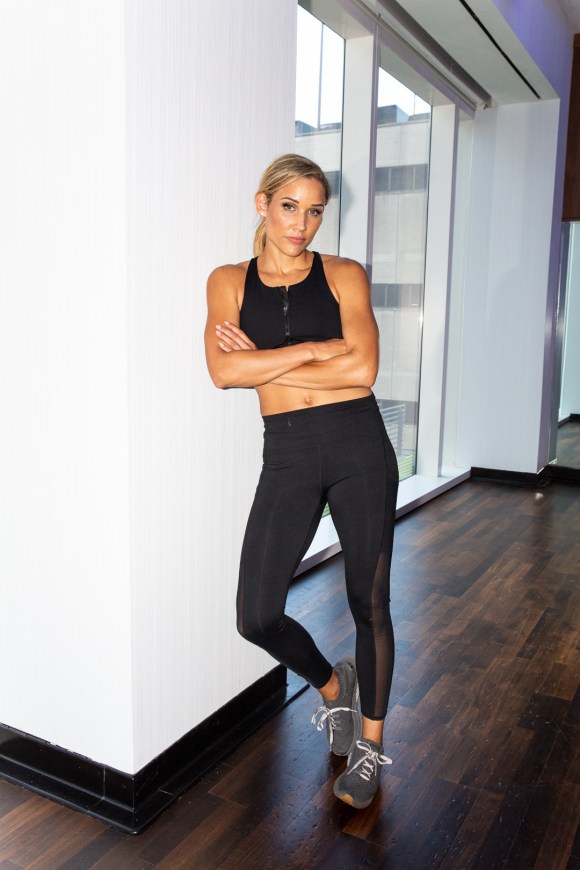 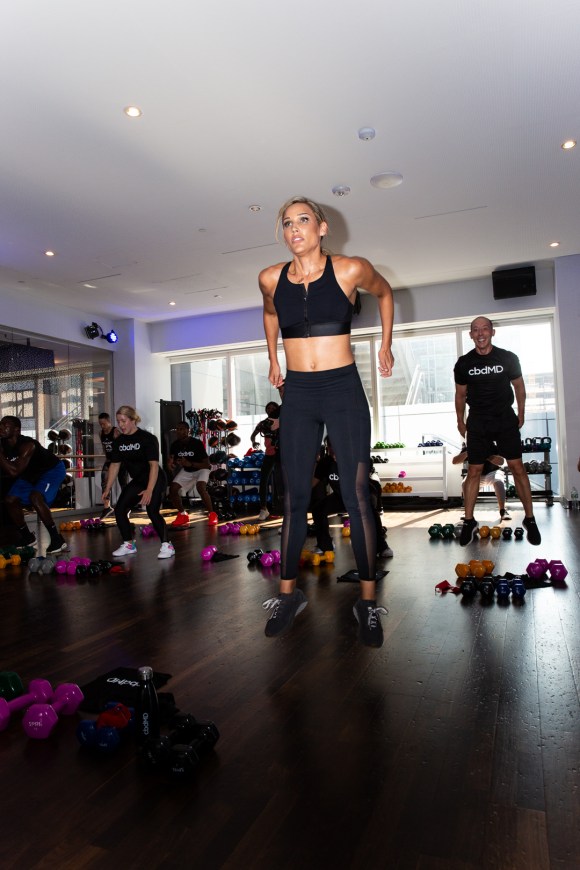 When Jones is not training or attending meetings, she’s working on her nonprofit project. Inspired by the generosity of others in her own life, Jones started Hurdles of Hope, a foundation that creates community programs for individuals who face socio-economic hardships. With a focus on single mothers, families with incarcerated members and youth living in poverty, the foundation provides resources to overcome difficult obstacles. As someone who was thrown many barriers growing up, Jones’s connection to her foundation is personal and hard-hitting. “I’m a firm believer in the quote fall seven times, get up eight,” Jones says. “I’ve been close to an Olympic medal multiple times and haven’t let it stop me from coming back. I didn’t make my first Olympic team and then went on to make three more after that,” she says genuinely.

Our workout has ended, and as we both throw on our sweatshirts to head out for smoothies, I snap back into reality, realizing that Jones is not my lifelong friend, but the subject of the interview, and will soon spend the rest of her day talking with the press. Unexpectedly, I found myself feeling balanced and refreshed, and the great workout class can only take half of the credit. Jones’s energy is one that any reporter would describe as unfeigned and easy-going. Most importantly, she remains humble after living a brag-worthy story of combating poverty and an arduous upbringing—an admirable trait that has stuck with her since the beginning of her career and was very present when I was seated right next to her.