If you haven’t heard about NFT’s over the past few weeks, then where have you been?

A lot of the focus has been on NBA Top Shot, but we are here to tell you about Sorare, the next NFT sports platform exploding right now.

If Proper Football, sports cards, fantasy sports, or FIFA Ultimate Team are your jam, this is the NFT for you.

So what is Sorare?

Sorare is a Football (Soccer) NFT platform blending licensed Digital Collectibles with the gamification and reward potential of Fantasy Sports, all built on Ethereum blockchain.

Where NBA Top Shot purely focuses on collectibility in typical sports card fashion, Sorare changes the game, allowing users to not only build their sports card collection but become ‘managers’ and use their cards to compete each week for rewards and prizes.

For example, this Kylian Mbappé unique sold for $65.6k (on November 29th, 2020), but should actually reward the buyer for 10 + years based on Mbappé becoming one of the world’s best players and therefore helping return healthy in-game rewards, as well as accumulating stored value based on scarcity as per the world of NFT’s. 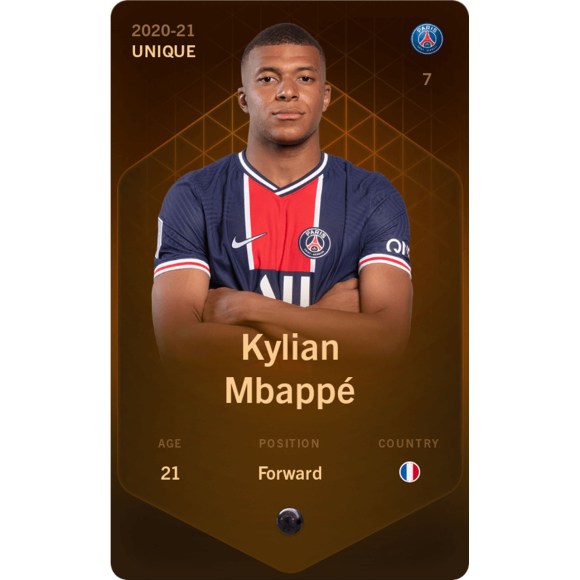 Each Sorare card holds the same attributes as other NFT assets; the token cannot be copied or taken away from your possession.

Sorare already has official licenses with 126 clubs including the likes of Liverpool FC, Real Madrid, Bayern Munich, and Juventus, and are adding more all the time, meaning you can buy some of the world’s best and most recognizable players straight away on the platform!

You thought NBA Top Shot was big? This is the leading NFT platform for the most popular sport globally—catering to the 3.5 billion fans of football worldwide.

Sales momentum is growing. In the past week, it hit over $1.8m in volume, but compared to NBA Top Shot which hit a sales volume of $17m in the last 24 hours alone (according to cryptoslam.io), the hype for Sorare is only just beginning, and the potential is huge.

There have been some pretty impressive sales on Sorare recently, including a Cristiano Ronaldo Unique card selling for $102k

There is a little more to get your head around than with NBA Top Shot, so here is everything you need to know.

How can I get started? Building your team

When you start you are awarded with 10 common cards to build your team.

You can then purchase players in a number of ways:

Transfer Market – here, you can directly purchase players other Sorare Managers have put up for sale, whether through the buy it now listed price or through direct offers to owners

*Pro Tip: This may not work for much longer, but I have found a few auction bargains in the early hours (GMT time) whilst others have been sleeping. Stateside you may be able to use this to your advantage!

There are 4 card levels: Common (these cannot be sold on the marketplace), Rare (100 cards exist), Super Rare (10 copies exist), and Unique (you guessed it, just the one!)

This means that there are only 111 player cards of value minted per season, and released gradually during the season!

If a player leaves their real world team, and joins another team in a league that Sorare analyzes from a data perspective, your card will continue to earn points.

Bruno Fernandes is a great example here. His cards were minted in the 19-20 season when he was playing for Sporting, a team under license by Sorare.

Players who own his 19-20 Sporting card still earn points each game week, but no new cards are being introduced into the market, so these cards are absolute gold.

You can buy players using your credit card or with Eth by connecting a Metamask or Coinbase Wallet via WalletLink.

It goes without saying the rarer the card, the higher the price, and whilst the superstars we all love and know can be deemed as expensive, there are plenty of hidden gems for you to unearth just beneath the surface.

If you think a young player is going to break through and become a football superstar, put your money where your mouth is and pick him up early for cheap – Timothy Weah for me – I’m still hoping he can emulate his Dad!

If you are right, the rewards could be massive.

As a new manager, you will be able to enter the Rookie League which will reward you with Common and Rare player cards based on results.

At this stage, you will need to compose a 5-a-side team with your cards with your choice of formation – 1 Goalkeeper, 2 defenders, 2 midfielders, or attackers

Points are attributed to your card based on real-world performances, scored up to a maximum of 100 per card and your position in the league will be ranked against other managers.

Each week your cards earn XP points that can add multipliers to the cards in-game, and allow you to compete in higher divisions and win rewards.

You can also assign a Captain, who will earn bonus points so pick carefully.

Gameweeks run Tuesday to Friday, Friday to Tuesday and you can compete in the Rookie League for eight game weeks, after which you have to put on your big boy pants and enter the regional and global divisions.

There are three global leagues for you to participate in:

Card level criteria differ for each league, meaning you have to think strategically about how to level up and if you want to compete in higher leagues—bear in mind, higher leagues will mean less but potentially more fierce and experienced competition!

You can also submit players to the Training League to level up XP! 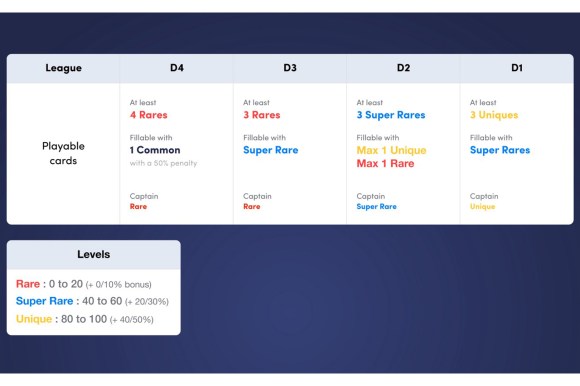 There are also regional leagues that open up based on enough licensed teams from that region playing in a given game week:

As you build your card collection, you can actually enter multiple leagues in the same game week.

*Pro Tip: As football is the global game and Sorare’s are mopping up licenses around the world, it means seasonality is less of an issue.

Consider building your team to take advantage of leagues such as the J-League & K-League, where other managers may miss opportunities. Who doesn’t want a vested interest in Kawasaki vs. Yokohama?!

You can take a few approaches to play Sorare:

*Pro Tip: Sorare has an awesome community, so follow the Discord or Telegram where people will be happy to help get you started as well as regular AMA’s!

With sports cards still booming and the world of NFT’s taking hold, Sorare takes the NFT structure and makes it engaging, exciting, and brings you back each day for more. This tied in with my belief that platforms based on official IP will be the dominant forces in this space; I think Sorare is just getting started 🚀.

NFTs Give Digital Artists and Musicians Superpowers
The Top 10 Most Expensive NFTs Sales So Far
A Guide to NFTs, and How They Are About to Revolutionize Pretty Much Everything