The sports card market is booming. Many who love sportsâ€”and even some that donâ€™tâ€”have been collecting sports trading cards for years. Over the past 12 months, we have seen an explosion in the market of all sports cards with the term â€œSports Cardsâ€ increasing in interest by over 100% according to Google Trends.  Check out the rise in the price of a 1986 Michael Jordan rookie card for reference.

Along with sports cards, there has been a movement towards Bitcoin, ETH, etc., as the currency of the future.  With cryptocurrency comes something called â€œblockchainâ€; to put it simply, blockchain is a database or a storage of value. One might be thinking, â€œHow in the world does crypto/blockchain have anything to do with the sports card market?â€  This is where NBA Top Shot was born.

What is NBA Top Shot?

NBA Top Shot is an officially licensed product of the NBA, in which users can own a piece of the action known as â€œmomentsâ€.  A moment is an NBA highlight that has become a digital collectible and can be held onto forever. The technical term for these moments are Non-fungible tokens (NFTs).  An NFT acts as a digital certificate on the blockchain that gives the asset holder authenticity and ownership over the asset.  In NBA Top Shotâ€™s case, this is a moment.  The tweet below gives an idea of what an NBA Top Shot moment looks like.

A common question around the internet from speculative collectors is: â€œWhy would I buy a highlight I can watch on Youtube?â€ However, a better question might be, â€Why would I buy a sports card I can print out on my computer?â€ The answer to this is the proof of scarcity, authenticity, and ownership gives these assets valueâ€”both digital and physical.  Each moment is assigned a set, series, tier, and serial number verifying the individuality of each moment minted.

Sales data from moments sold on the marketplace over the past month might blow your mind. 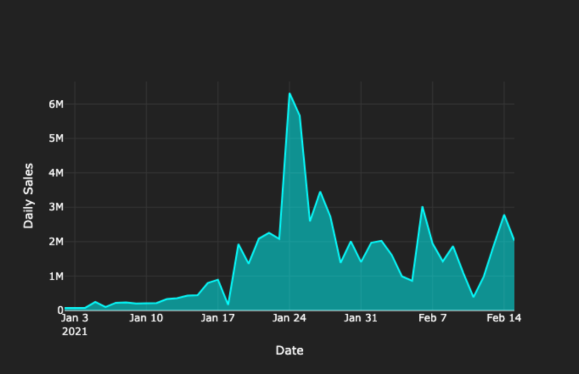 No one can deny that the future is digital and the sky-rocketing volume and value on NBA Top Shot is further proof of concept.

My Introduction to NBA Top Shot

As is my belief with crypto, it is not too late to get in. NBA Top Shot is still in beta while they continue to make improvements and increase efficiencies with processes throughout the site.  The concept of NBA Top Shot came to life in July 2019, when the NBA, NBA Players Association, and Dapper Labs got together for the joint venture.  About one year later, the concept was brought to life at nbatopshot.com. Anyone who begins to collect on NBA Top Shot will still be an extremely early collector in the new space. I personally learned about NBA Top Shot on January 15th after seeing co-founder of fantasylabs.com, Jonathan Bales, tweet out an article explaining why he purchased a $35,000 highlight of Memphis Grizzlies star Ja Morant posterizing Aaron Baynes.

I consider Jonathan Bales to be a savvy, forward-thinking investor who has been a major believer in bitcoin, blockchain, and the future of digital technology before the rise in popularity over the past couple of months. After reading his piece on his $35,000 purchase, I myself began to dig deeper and do some self-education on the components of NBA Top Shot. I was hooked.

Just one week after I purchased my first couple packs and some other moments off of the marketplace, prices began to sky-rocket: a 20% increase in account value overnight, then 50%, then a whopping 200%. The user-base was exploding with thousands of new users flooding the site, eager to buy packs and purchase moments off the marketplace every single day. Not only did I see this as an opportunity to invest and make money, but the moments I purchased gave me that same feeling of pride in ownership as any valuable trading card I have owned throughout my days of being a collector.  As someone who started on Top Shot flipping moments for a quick buck, the process quickly turned into a sense of pride for my personal collection. This is the moment, as a collector when I knew NBA Top Shot was here to stay.

How can I start my collection?

There are currently three ways to acquire moments: buying packs, the marketplace, and completing challenges.  Buying packs is my recommendation to new users looking to start their collection.  Packs can range from $9 to as much as $999, depending on the rarity and quantity of the moments included in the pack drop. Due to the parabolic rise in NBA Top Shot popularity, it is tougher to get a pack than just going to the pack’s page on the site and purchasing (although the long-term vision for the site is that $9 common packs are readily available for purchase at any time). The demand for these packs currently outweighs the supply, as the marketplace EV for a common pack is calculated at upwards of $30.

The best way to get a pack today is to join the NBA Top Shot Discord. The current method to acquire a pack is to sign in to the website and join a queue at the appropriate drop time.  You will then be randomly assigned a number in line to purchase the pack.  When the number of users in front of you drops to â€œ0â€, CONGRATS, you are able to purchase an NBA Top Shot pack!

In addition to pack drop times, the NBA Top Shot discord provides much more. Resources included in the discord include:

As a new user on NBA Top Shot, it is critical to expose yourself to the discord from the beginning.  Beware:  the â€œGeneralâ€ channel can be extremely toxic when things go wrong with the site (remember it is still in beta).

The marketplace is another avenue to take when looking to add to oneâ€™s collection.  The marketplace allows one to search by player name, team, or set.  NBA Top Shot also gives users the ability to filter by series, tier, price, serial number, position, and more.  Whether you have a certain budget to spend on your collection or you are looking only for moments from specific players, the marketplace has you covered. The interface is very user friendly and easy to navigate.

Additional value is added to a moment when a specific moment is required as part of a challenge. A challenge is one of the best ways to receive exclusive moments that canâ€™t be found through pack drops. To complete a challenge, a user must collect all moments of the required challenge and hold those moments until the timer runs out.  Once a user has completed the challenge, a random serial number of the challenge reward will be gifted to the userâ€™s NBA Top Shot collection. See the image below for an example of a current ongoing challenge for a Metallic Gold Limited Edition Larry Nance Jr. Dunk.

The future is digital and NBA Top Shot hits all the key areas to provide fans, collectors, and investors with an innovative product bound for mainstream success.  The trading card industry alone is worth over $5 billion annually.  The potential for the digital collectible industry is astronomical and weâ€™re just starting to see the growth.  Check out NBA Top Shot today and happy collecting!

Mike Novogratz Talks Cryptocurrency, Wrestling and Criminal Justice
WTF Is a Crypto Hypebeast?
What is Bitcoin and Is It Too Late to Get Started?