NFTs are becoming more than just images on the internet that are selling for shocking sums of money. New NFT projects are pushing the boundary of what is possible with blockchain technology.Â

With the rise in the supply of new projects being minted on the blockchain, competition is heating up for creators who hope to push these boundaries and stand the test of time in an exciting new market.

This market excitement marks a critical time period for NFTsâ€Šâ€”â€Šhistorical projects are being rediscovered and weâ€™re seeing Apes and other characters take over the profile pictures of pro athletes and famous rappers. Everyone wants a piece.Â

But with so many new projects launching on a regular basis, it can be overwhelming to make sense of it all and figure out where to spend your time and money.

How do you identify the smart creators who are pushing the limits of blockchain technology? What real-world impacts can an NFT project actually have? How do you figure out what a â€œgoodâ€ NFT project is?

Weâ€™re going to take a look at a unique project that contains a lot of attractive elements (as well as some downsides) as a case study to help you both learn what NFTs can do, how to identify projects that resonate with you, and how to stay practically optimistic about your investments.

Before spending money on any NFT project, you should do your own research and never spend more than you can afford to lose. Just because a writer on the internet likes a particular project, doesnâ€™t mean you should buy into it. 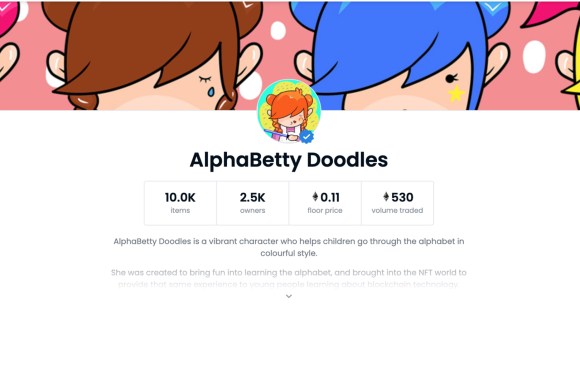 “AlphaBetty Doodles is a vibrant character who helps children go through the alphabet in colorful style. She was created by Cheryl Griffin to bring fun into learning the alphabet, and brought into the NFT world to provide that same experience to young people learning about blockchain technology!”

If we want to look back at this time in 20 years and celebrate being in the NFT movement early, weâ€™d better start involving children in our new hobby.

Many children get into hobbies because of their parents, and NFTs arenâ€™t any different. Itâ€™s this unique factor that has resonated with so many early adopters of the project:

The community discord is filled with members who involved their children in picking out AlphaBetty NFTs and that created an emotional connection to the project:Â 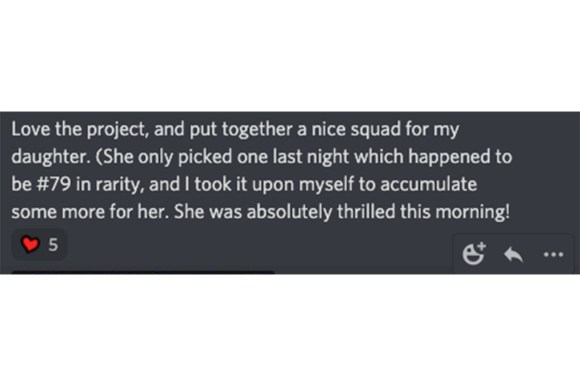 Spending time in Discord groups is a powerful research tool that can give you a better sense of the community. As you do this, pay attention to what people are saying. Itâ€™ll become obvious if many are looking to flip a project or if they are there for a collective reason they believe in.

If all people have to say about their project is that â€œit will be the next [insert well-known high priced project here]â€ it should be cause for concern.

And although the AlphaBetty Doodle community is strong and aligns with the educational mission of the project, its long-term viability is highly dependent on the creator’s ability to execute their project roadmap.Â Â

Each NFT project has what is called a â€œroadmapâ€ thatâ€™s a game plan to bring utility to the holders of an NFT and the community they want to impact: 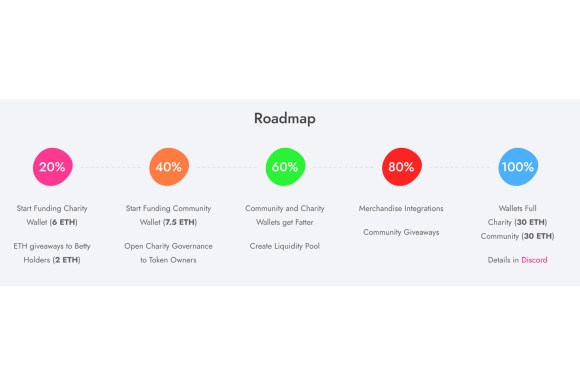 Part of the funds raised from the initial sales of AlphaBetty Doodles is used for charitable organizations (as decided by the creators and voted on by token holders). Some of those funds will go directly back to the community in the form of giveaways or the repurchasing of AlphaBetty Doodles at the floor (lowest price available for sale) to increase the value of the project.

A portion of funds generated from secondary sales will also be placed in a community wallet and will be decided by token holders on how it should be spent.

Because the project is based on a character from a previously published book, there are plans to integrate merchandise and other collaborations featuring NFTs from the project.Â

In short, buyers invested in a nascent brand that will pay dividends over the course of the project in a variety of ways, with a portion of revenue dedicated to charitable organizations in childhood education.Â

This AlphaBetty Doodles project sounds very exciting, but its long-term success relies on the founding team, much like any business.

Itâ€™s important to look for founders who are transparent in who they are, why they care, and what skills they have to move the project forward.

In this case, there are 9 team members, which include a Social Impact Consultant, 4 community-based team members, and a CPA / CFA. The team members are also listed by their real names and speak about their personal lives to instill confidence in their community of token holders.Â

Cheryl, the founding member and artist, posted doodles of the character she drew over 10 years ago. This may seem like a minor detail, but itâ€™s an honest signal of long-term interest in making this project succeed.Â

Itâ€™s also important to remember that youâ€™re still making a bet that the character will become popularized through its deployment as an NFT.

Holders of the token may get excited about the prospect of becoming the next Miffy or Berenstain Bears, but itâ€™s competitive and difficult. Currently, the published book has just 3 reviews and is clearly a very new project.Â

The fun part is that the community of token-holders (currently at 2,700 people) can rally behind the founders to support the vision.

Overall, this is a fun project that has the potential to unite parents and children over blockchain technology. It may be an attractive draw for whales (a term used to describe big spenders in the market) who also want to involve their children in the space.

And although it seems promising, a lot has to happen for AlphaBetty Doodles to succeed in the long term. Spend time researching projects to determine which ones you want to buy into. Historical significance, cultural relevance, the founding team, the community, and the execution of utility all play a major role in the success or failure of a project.

Remember, there was a boom similar to NFTs in the trading card game space in the early nineties. Many of these had compelling value propositions and strong IP behind them, but the majority of them failed.Â

Weird Whales: How a 12-Year-Old Coded His Own NFTs and Made $160k Overnight
Five OG NFT Projects to Watch: CryptoKitties, Decentraland and More
How Curtis McDowald and USA Fencing Took â€œCryptoPunksâ€ to the Tokyo Olympics