After the successful launch of the first Graffiti Queens art exhibition in April 2021 hosted by Graffiti Kings in Decentraland, Darren Cullen, CEO of Graffiti Kings, approached me again with another historic exhibition idea. He proposed we put on the first ever 16 and under only NFT show in the metaverse, titled Graff Punks.

The Graffiti Kings are avid sponsors of kids and teenage artists. They began in 1996 helping kids stay off the streets of London by getting them involved with graffiti art projects all over the UK. When they started organizing these projects, Darren saw himself reflected in many of the kids, having also grown up on the tough broken Britain streets of London as a youth, in and out of trouble with the law. Seeing the kids begin to open up and seeing their lives start to change for the better inspired him to keep the projects ongoing for them.

Next month, Darren starts an art program in his local youth prison. Darren’s work has given him nationwide attention, leading him to become the only UK government-backed graffiti artist and official street artist for the 2012 London Olympics. Graffiti Kings work all over the world for nearly every company we know about. It really is a rags to riches real life story for another time. In fact, take a look at his website and see the great work he produces.

Their enthusiasm for educating kids in art has now spilled over into NFTs as they see this space as the future for artists of all ages. The Graff Punks art exhibition will not be a one off, but an ongoing program for minors to help educate them about NFTs and this new digital world we are all entering, from onboarding to minting and teaching them all things metaverse so they can keep doing what they love to do: creating. 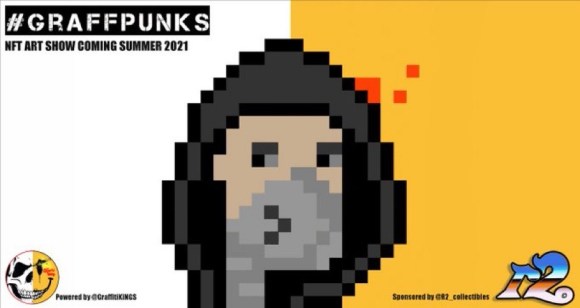 To make this exhibition extra special, we have teamed up with with some amazing individuals already championing the Metaverse world.

R2 Collectables have gladly stepped forward to sponsor the Graff Punks project. I was able chat with Roberto Nichela about why this is a special project for them and why they were eager to be apart of it:

“The story of the origins of the Graffiti Kings gives us a lot of inspiration and a good idea of how art can mean something to society. When we heard from Darren that he was starting up the Graff Punks Project, this was our moment of YES, we want to be able to do something for that. We understand that the supervisors (artists) who led are all doing this on a voluntary basis. My wife also works with vulnerable youth in the Netherlands, she knows that projects on a voluntary basis are a major undertaking and require a lot of energy. That is why we have decided to sponsor this fantastic project.”

The Uplift World team is also enthusiastic about being able to build a space for the youths to showcase their arts as this project goes hand in hand with why the Uplift World was created.

In addition to Uplift World and R2, EOS Amsterdam also recently joined the project as a sponsor. You can check out their recent piece about dropping NFTs on Wax if you’re looking to submit something to the Graff Punks exhibiton.

Be part of something bigger:

“The Uplift” is based on the Uplift.Art principle to create a winning scenario for everyone. In this case: every visitor, player, builder, creator or trader of NFTs. Everything is interconnected. Founded on positivity and collaboration, every participant can uplift others in a win-win upward spiral. We want everyone to win in terms of fun, creativity, meaningful connections and experiences, but also in “material” crypto or NFT rewards for being awesome and contributing to the whole. As an example, Uplift.Art gives a big chunk of its revenue to creators, users and, most importantly, up to 50% to selected charitable projects that need funding to make the world a better place.

The date of the first official Graff Punks Exhibition is August 28th. It is open to all artists 16 and under minting on the Wax Blockchain. You can enter via this form.

ERC-721 vs. ERC-1155: The Great Contract Debate
How A Mother of 3 Transitioned From the Traditional Art World to NFTs
Enjin Integrates NFTs Into Minecraft with MyMetaverse’s Meta City