“For The TL” is a crypto-art collective of over 75 artists in the Web3 space, ranging from emerging to established names.

Artist, curator and founder Max Kulchinsky, along with founding member Elijah Kuhaupt, originally formed this group to create opportunities for people who they felt weren’t being represented in the NFT art world.

What started off as a group chat of indie artists and has now quickly become a well-known collective of unique and talented powerhouses with stories to tell.

“‘For the TL’ means for the timeline,” Kulchinsky said, referring to the stream of tweets that users see when they log into the Twitter accounts.

The collective is diverse in race and gender and features artists of different mediums, including animators, 3D artists, illustrators, painters and more. Some notable members include Vinnie Hager, Gisel Florez, and Yosnier.

The group’s inaugural exhibition was in DCentral Miami, which featured over 60 artists. The show was called “For The TL.” 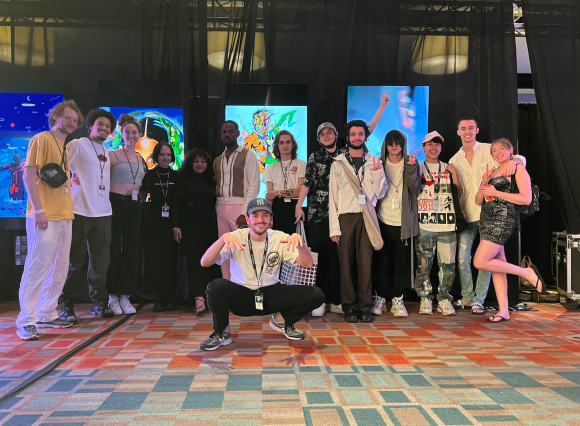 “That’s when it went from half joke to a serious thing,” Kulchinsky said.

Since then, the collective has presented physical and digital works at SXSW, NFT NYC, and more.

Not only has the group been a way for artists to collaborate together, “For The TL” has also acted as a community of friends who support each other.

“Having friends like those in ‘For The TL,” is the best part of being in web3,” Sophie Sturdevant said. “I’ve never been quite as inspired, challenged, and championed as an artist.”

“For The TL” launched its genesis collection, curated by Max Kulchinsky, on June 23rd through Nifty Gateway.

Here are the seven pieces involved in the drop. You can purchase them individually or as a pack here. 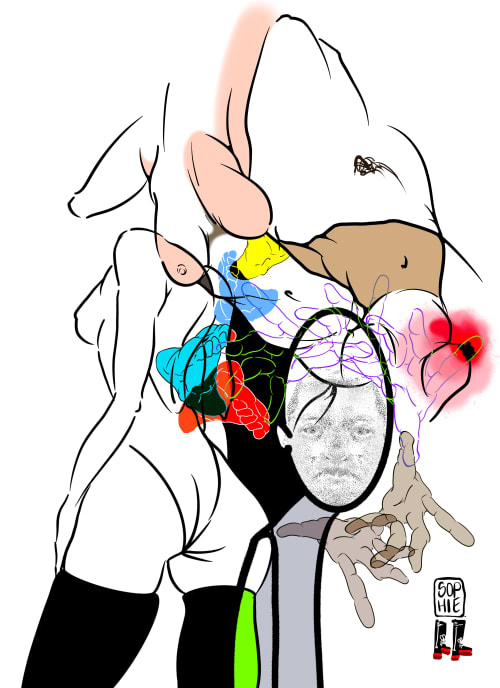 Her Art Style: “I work in both physical and digital spaces, but regardless of media, my work and process play on a “museum and mayhem” juxtaposition. Often, I like to stack dynamic + opposing narratives on top of another, intending to lead the viewer into emotional confusion or curiosity (or maybe even clarity, state of mind depending).”

“Curse of the Drifter” By Sean Williams 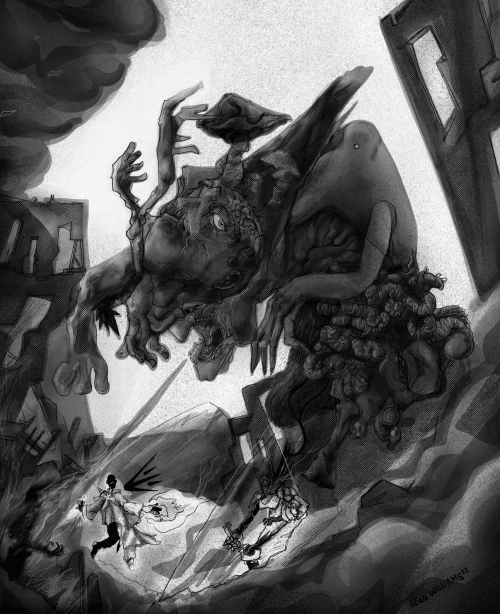 His Art Style: “If I had to use one word, I’d probably say my art style is ‘multidimensional’. I call my style GLÖSS and I consider it almost like looking at an object or idea from multiple perspectives, (whether they’re physical or conceptual depends on my mood at the moment) But that’s really just a fancy way of trying to say: I’m generally throwing shit at a wall (or accidentally kicking holes in one) and hoping it sticks. Visual ADHD. I make a lot of things, in a LOT of different directions, using a lot of different mediums, and I’m still trying to find the most succinct way to put it all together. It’s probably a lifelong process.” 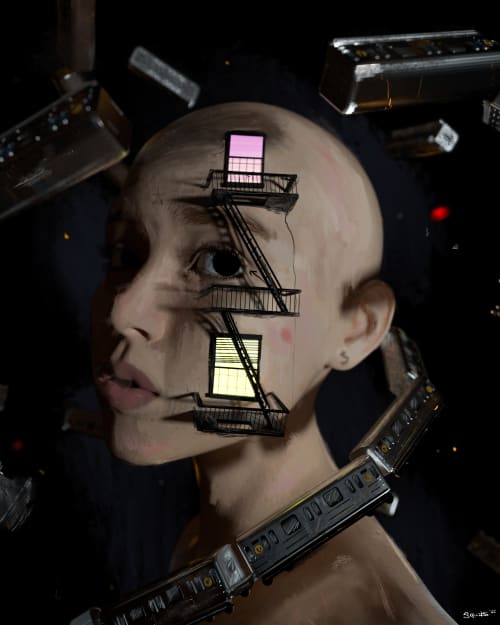 About the piece: “It’s completely inspired by move to New York. Spending late nights on my fire escape. After all I’m just a ‘transplant’ to the city.”

“Pieces of She” By Myriad of? 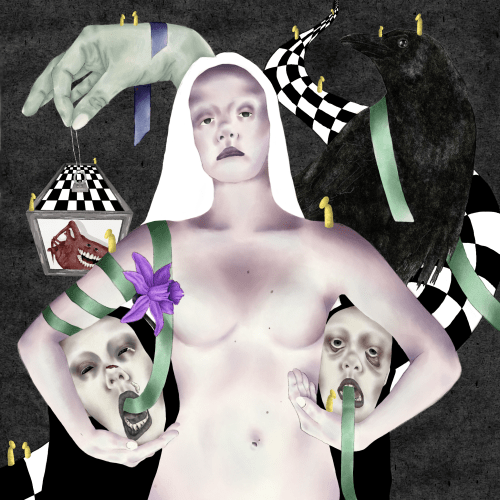 “Dark winds swirl, enveloping the legs of She
Gasps of air slip out tenderly brushing his lips as he breathes in
Living off each others’ lungs, slowly melting into one heart, finger tips graze along her spine, reaching in and tying her pretty little insides into bows
Suffocating on butterflies”

“According to Prophecy” By Bobbi Cai 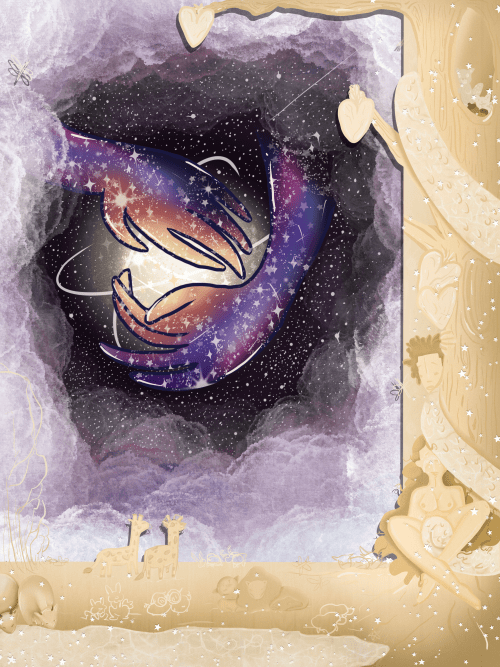 About the piece: “In the beginning when the heavens and the earth was created everything was perfect and the serpent taught knowledge and evil to Eve after she ate his forbidden fruit. We took it literally but something’s aren’t exactly what they seem to mean. This is another genesis for me.” 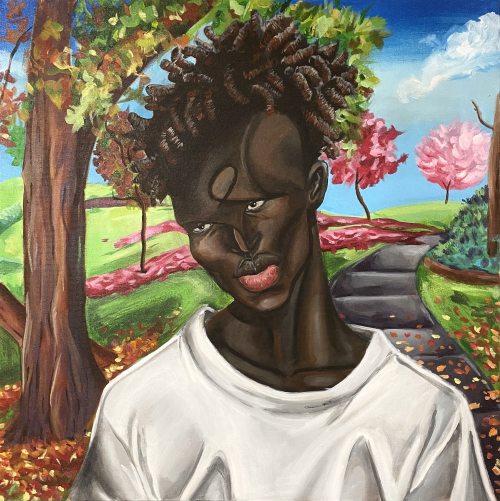 About the piece: “For many years I’ve been obsessed with the concept of luxury, and as I get older I started to realize the real luxuries in life are the experiences I’ve had and shared with others. One of my fav luxuries in life is visiting parks.”

“WATCH OUT” By Max Kulchinsky 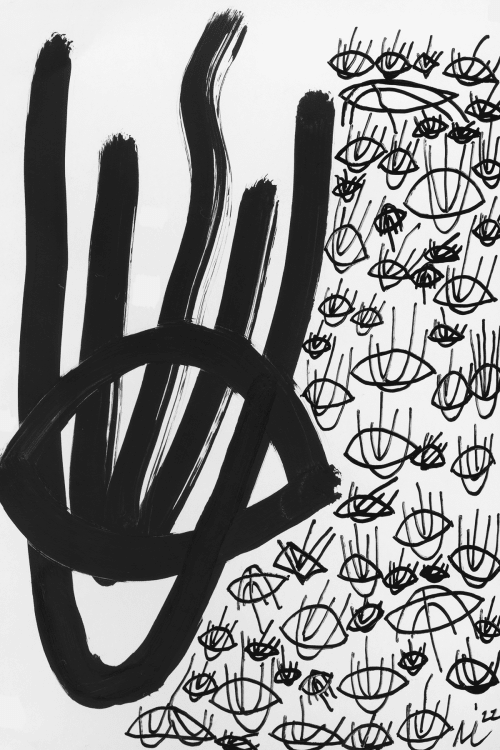 About the piece: “I’ve been drawing the ‘Watcher’ symbol for about a year now — it’s meant to be a reminder of safety and understanding to everyone who needs it.”

Catching up with Vinnie Hager, the Man Behind the Letters NFT Project
RTFKT and FEWOCiOUS Are Back At It, Pushing the Envelope with NFT Drops
What Is Manifold.xyz?