A few weeks ago, we published the 25 Most Expensive Soccer Cards Ever Sold, and now, itâ€™s time to turn our attention to the most expensive Soccer NFTs ever sold. NFTs, non-fungible-tokens, have the potential to disrupt the sports world and some of the sales on this list are comparable to the most expensive physical trading cards ever sold. Soccer is the most popular sport in the world, but because it isnâ€™t one of the top sports in the United States, its trading card prices donâ€™t compare to baseball, basketball, and football.

NFT â€œrookie cardsâ€ have a much better chance of global access, because anyone with an internet connection can purchase and store these digital assets.

We will look at the top 25 most expensive soccer NFTs ever sold from projects like Sorare, Wrapped Strikers, and collections released from players themselves (for example, Messiverse).

Prices for sales are listed in US Dollars based on the value of Ethereum at the time. 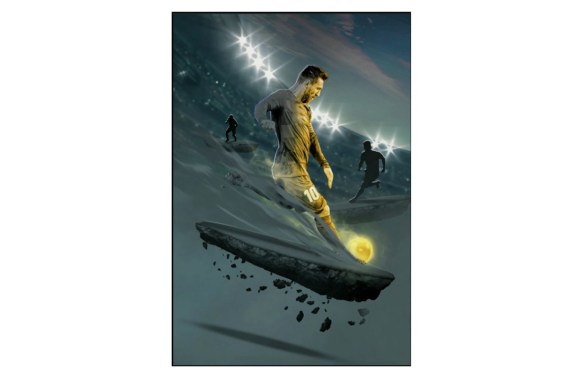 This past August, a licensed NFT collection called â€œMessiverseâ€ containing NFT assets that feature soccer legend Lionel Messi was auctioned to the public. The collection included this 1/1 â€œThe Golden Oneâ€ designed by Bosslogic, a famous artist known for his work on Marvel Studios projects. Dwayne â€œThe Rockâ€ Johnson even reached out to BossLogic to create some art for one of his upcoming movies.

This 1/1 Messi NFT had a reserve price set at $50,000 but rocketed to over $1 million in bids. While the final sale price hasnâ€™t been recorded on Ethernityâ€™s website, the last bid that was published hit $1.12 million, which is 161% of the value of the most expensive physical soccer rookie card ever sold. 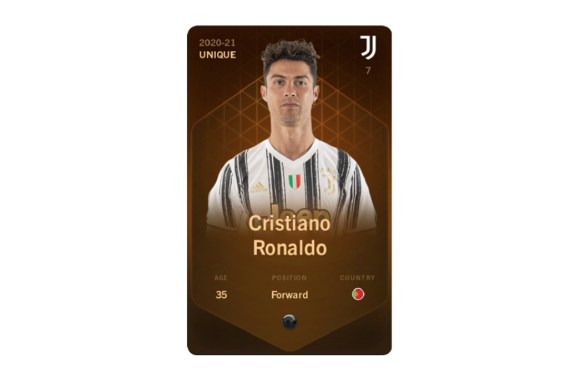 Cristiano Ronaldoâ€™s Unique 1 of 1 Sorare card sold for $265,275.55 just 7 months ago. Sorare is an NFT based fantasy soccer game that allows its players to buy, sell, trade, and manage a team built with digital playing cards, virtually.

Ronaldo may be the most popular soccer player in the world, and this Unique 1/1 NFT sold for just 15% less than the most expensive physical Ronaldo rookie card (last sold for $312,000). 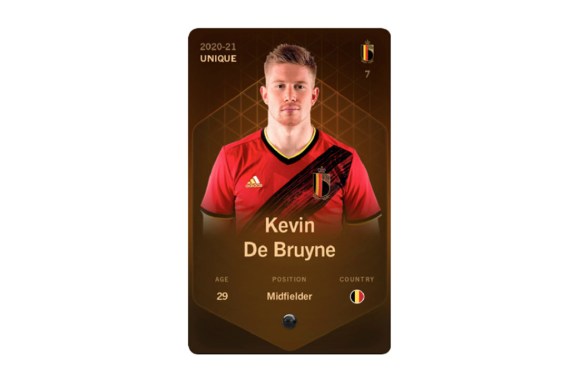 Kevin De Bruyne is a 30-year-old Midfielder and some argue heâ€™s one of the best players in the world, if not the best player in the world based on recent play. Heâ€™s a decorated player, including 3 Premier League Titles, and has been the player of the year in England, Germany, and Belgium. His 1/1 Unique Sorare card was sold 2 months ago for 52 ETH or $167,469. 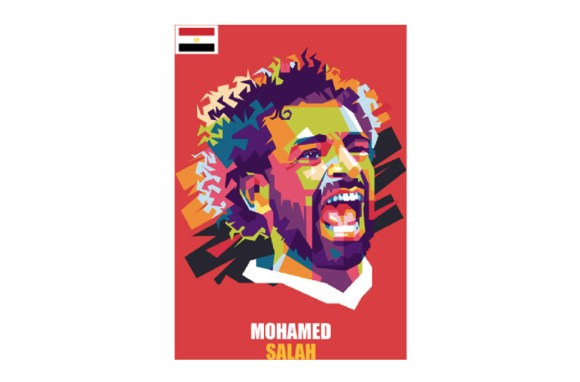 Mohamed Salah is a 29-year-old Forward for Liverpool F.C. Heâ€™s scored 10 goals in 11 games in the English Premier League and his Wrapped Strikers Iconics card (numbered to just 7 copies) sold two weeks ago for a record 35 ETH after a 3-goal performance against Manchester united.

The Crypto Strikers project, now called Wrapped Strikers on Opensea, was created in 2018 in anticipation of the 2018 World Cup. It is the first known soccer NFT project and was created by two founders with a passion for sports cards.

During the release of the project, there was a â€œcard of the dayâ€ which featured top players in the 2018 World Cup and had a significantly lower supply than the typical cards in the set (featuring work from a different artist). This is the most expensive Wrapped Striker card that has been sold. You can learn more about the set and its history here. 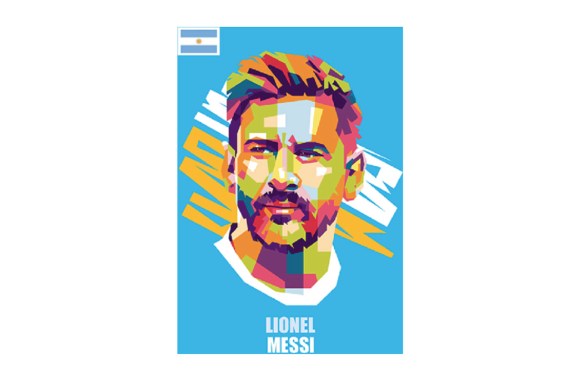 Messi holds the title for most expensive NFT ever sold, but this is the earliest known Messi NFT (and the rarest from the set). While itâ€™s not a licensed product, the history of the set is intriguing and is clearly valued on the open market. 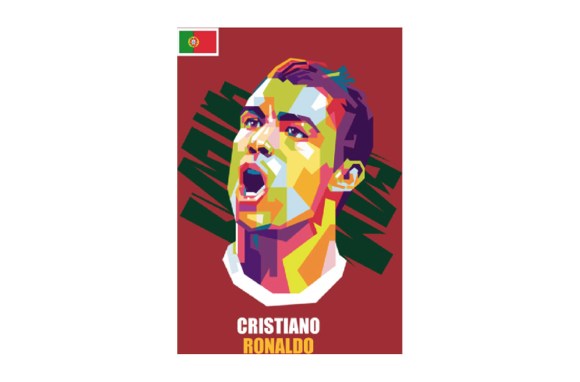 So far, weâ€™ve generally seen physical trading cards outprice traditional rookie cards, but this is a significant sale for an NFT â€œrookieâ€ card of the most popular soccer player in the world. 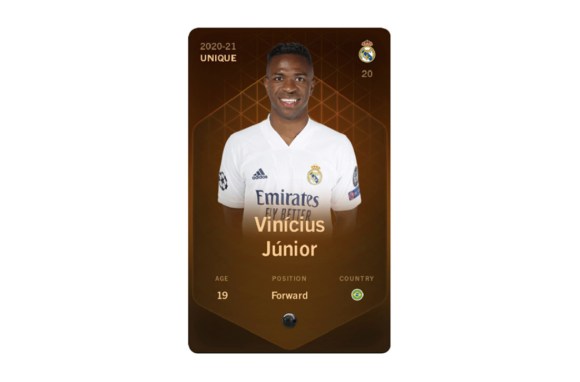 VinÃ­cius JÃºnior is 21 years old and is a Forward for Real Madrid. He was named the UEFA Champions League player of the week this past August and scored 7 goals in 10 games in LaLiga. Heâ€™s a young player with a lot of potential. His 1/1 Unique Sorare sold 1 month ago for 39 ETH, or $114,634. 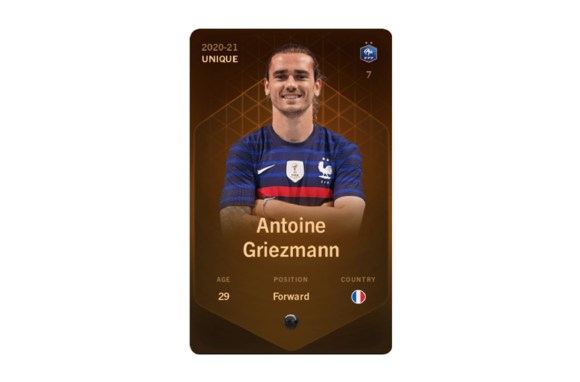 Antoine Griezmann is a 30-year-old forward for AtlÃ©tico Madrid. In 2018, he won the Silver Boot after as the 2nd highest goal scorer in the 2018 FIFA World Cup tournament. He scored 4 goals in the tournament and helped France win the World Cup. Greizemannâ€™s 1 of 1 Unique Sorare sold 4 months ago for 50.88 ETH, which at the time was worth $110,668.

As a price comparison, a Griezmann 1 of 1 Immaculate Autograph (non-rookie and not graded) sold for $1,500 in October. 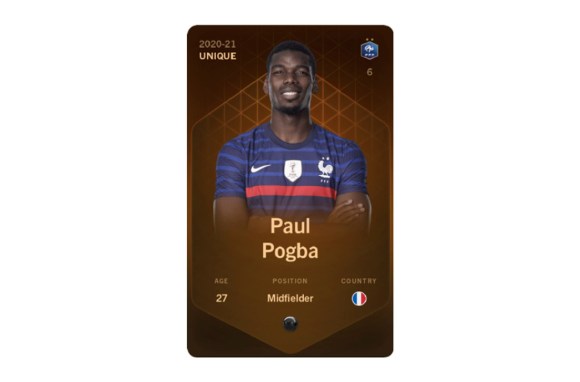 Paul Pogba is a 28-year-old Midfielder for Manchester United and was also a member of the France national team that won the 2018 World Cup. Pogba scored a goal in the final game to help France secure its championship over Croatia. Pogba is also a two-time English League Cup winner and one-time Europa League winner. His 1/1 Sorare Unique sold 4 months ago for 39.09 ETH, worth $92,491 at the time. 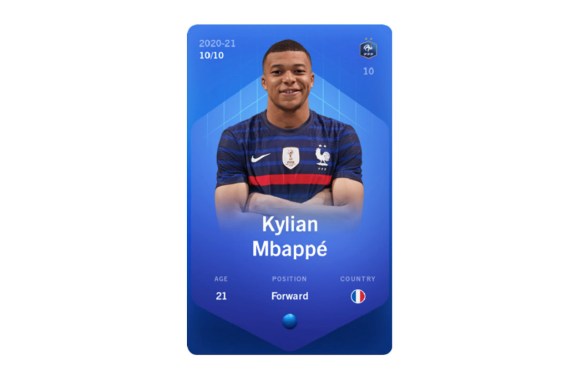 Like Griezmann and Pogba, Kylian MbappÃ© won a World Cup with France in 2018 and scored a goal in the final match against Croatia. MbappÃ© is a popular young soccer player in the physical sports card market, with two copies of his Gold Prizm World Cup rookie card making the top 25 most expensive soccer cards ever sold list. MbappÃ© is 22 years old and plays forward for Paris Saint-Germain. 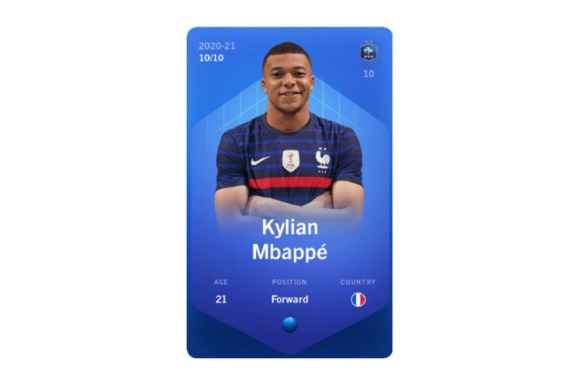 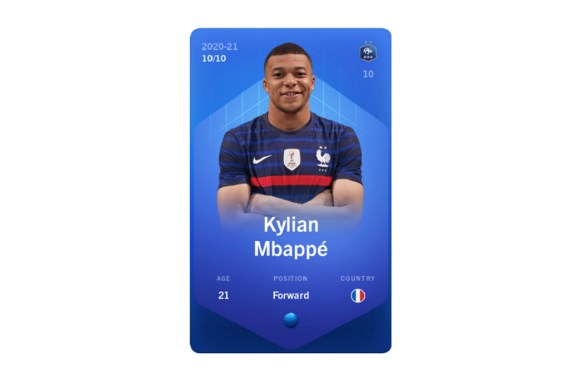 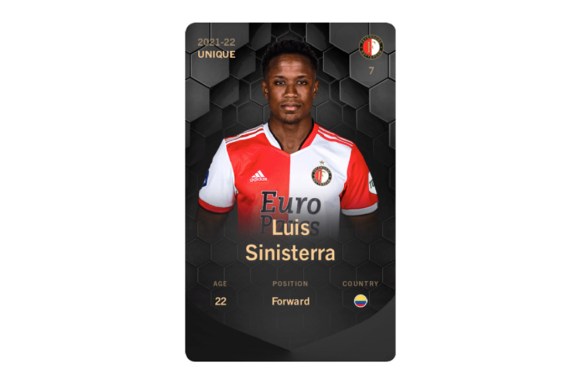 Luis Sinisterra is a 21-year-old winger who plays for Feyenoord Rotterdam, a Dutch professional soccer team. Sinisterraâ€™s 1/1 Unique Sorare NFT sold 2 weeks ago for 20 ETH, valued at $80,527. Sinisterra is a young player with potential but has only just begun his professional career. Sorare does have a utility advantage over the earlier Wrapped Strikers NFTs in that players can earn money by creating rosters from cards they own of particular players. Itâ€™s interesting to see that dynamic play out especially when comparing a price like this NFT to the next one in the list from Cristiano Ronaldo. 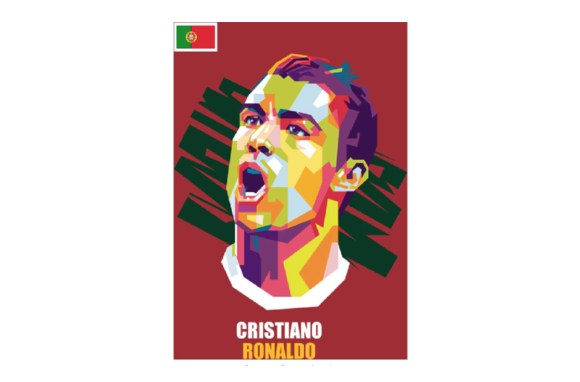 Two months ago, this Cristiano Ronaldoâ€™s Iconic /12 sold 25 ETH, valued at $79,200. The Wrapped Strikers NFT project was created in 2018 and has historical value relative to Sorare. In 2018, the cards were used as a fantasy game, much like Sorare is used today. 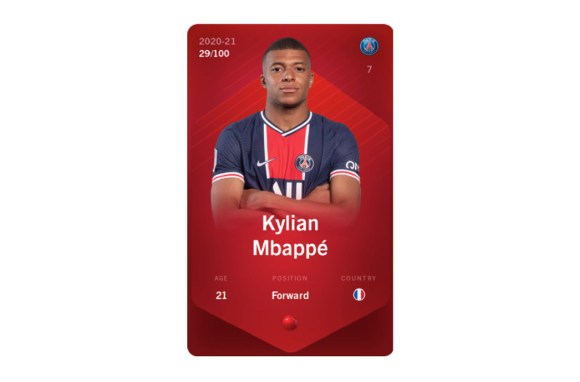 Despite 100 copies issued of this NFT, Kylian MbappÃ©â€™s Sorare Rare sold 8 months ago for 49.99 ETH, worth $74,558 at the time. MbappÃ© Sorares show up multiple times on this list, but this is the only Rare /100 in the top 25 soccer NFT sales. Given that it sold 8 months ago, itâ€™s likely it was one of the first of the Rare cards to hit the market. 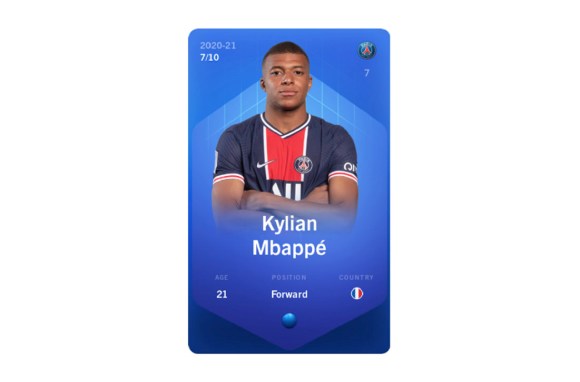 4 months ago, this MbappÃ© /10 Super Rare sold for 32.5 ETH, valued at $70,679. This is $14,000 less than the next highest sale of this NFT but sold for 4.5 more ETH. Keep in mind, the price of Ethereum moves up and down. Although this sale ranks lower in terms of US dollars, some may argue it was a more valuable sale given the higher ETH price. 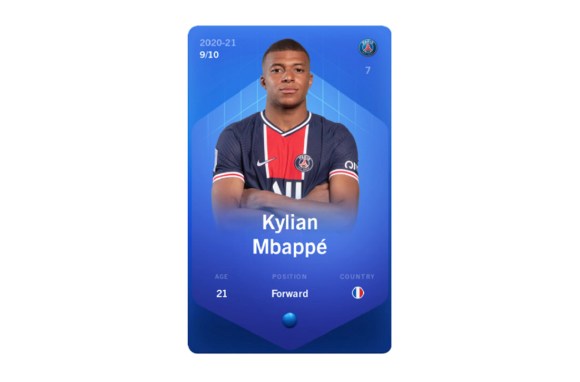 A second MbappÃ© Super Rare sold 4 months ago for 32.18 ETH. As is the case for the previous Super Rare sale, this card had a higher sale price in terms of ETH, but ETH was worth less at the time of the sale. 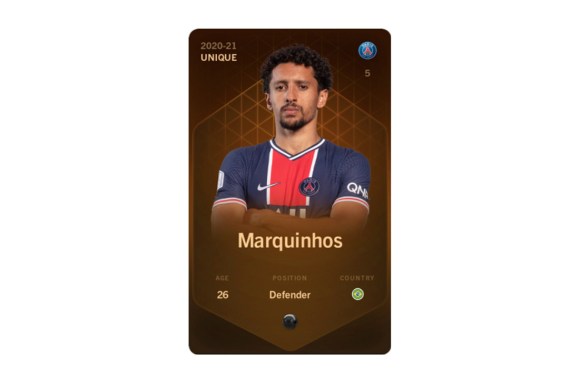 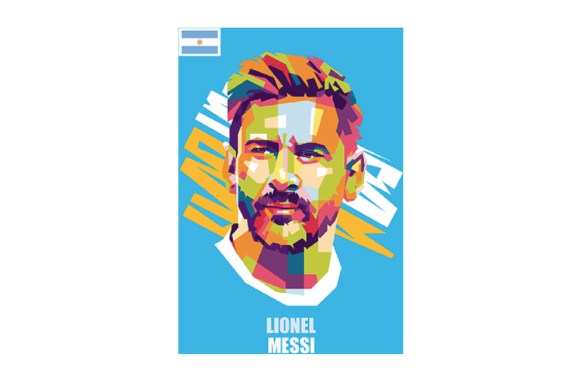 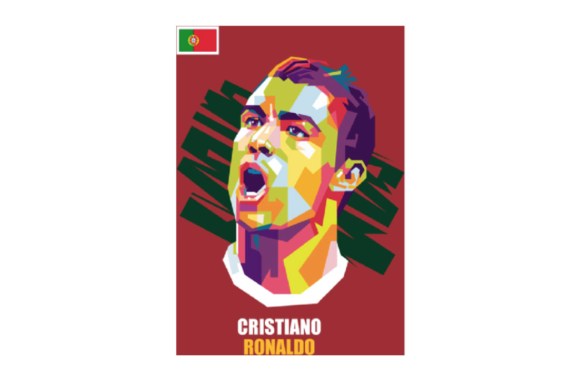 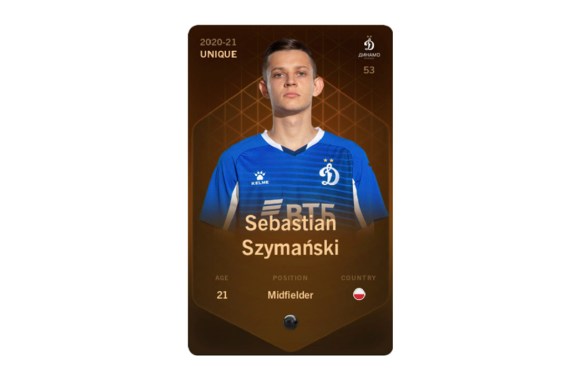 Sebastian Syzmanski is 22 years old and currently plays for FC Dynamo Moscow as a Midfielder. In 2018, he made Polandâ€™s preliminary World Cup team but did not make the final cut. He recently signed a 5-year contract with Dynamo and was voted player of the month by Dynamo fans in July of 2021. Itâ€™s fascinating to see how well 1/1 Unique Sorares have done in the market, even for lesser-known players. 2 weeks ago, his 1/1 Unique Sorare sold for 15 ETH ($63,935). 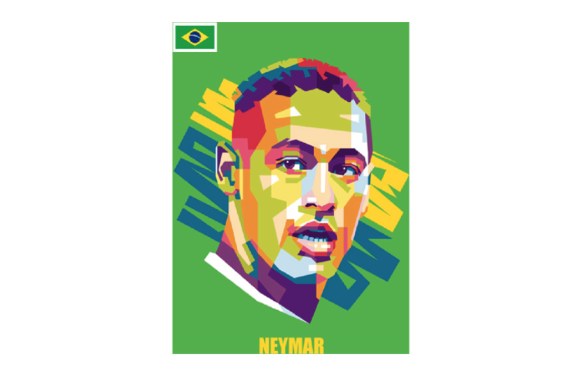 Neymar is a 29-year-old Forward who currently plays for Paris St. Germain and the Brazilian national team. He is the third-highest Brazilian goal-scorer of all time and is on pace to beat Pele and Ronaldoâ€™s records. Neymar is a popular player (163 million Instagram followers and was named Brazilâ€™s most marketable athlete), but heâ€™s been criticized for his lack of a World Cup victory.

There are just 9 Neymar Iconics NFTs and one sold for 20 ETH ($63,297) 2 months ago. Neymar is often in the same conversion with Messi and Ronaldo as one of the greatest players of his generation and is ranked 3rd in global player popularity. 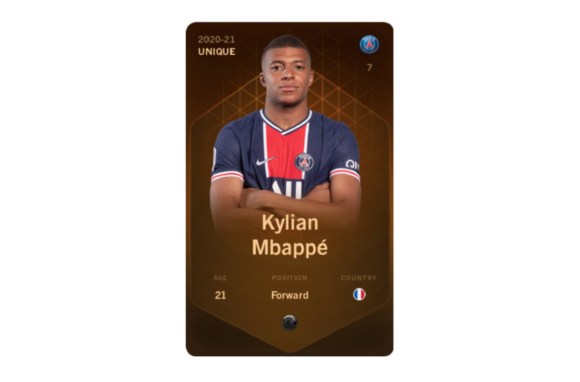 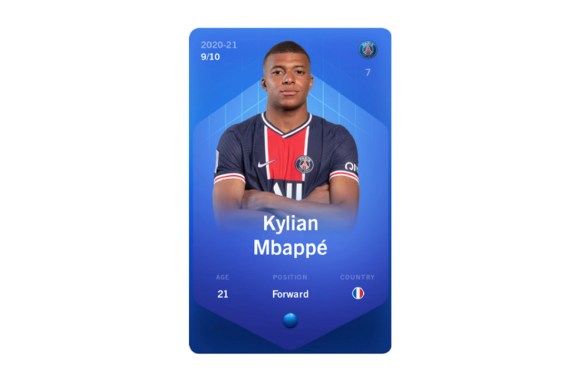 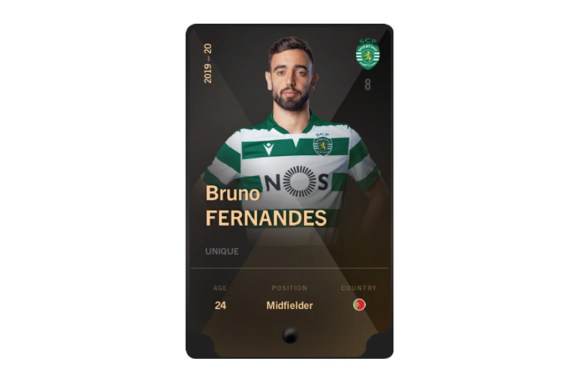