That’s what Jack Settleman, noted NFT enthusiast and contributor to this very website, said last weekend when discussing the state of NBA Top Shot on a YouTube livestream.

Settleman’s statement crystallized a lot of what I’ve been feeling about a platform that has had a rapid rise, and is now creating frustration, confusion even, from a lot of its users.

FUD is high for Top Shot, with optimists pointing to the NBA Playoffs—still a long five weeks away—as a near term opportunity for another exciting time in the marketplace.

But despite the negativity, this is a community, an ecosystem, that’s still engaged. Really, really engaged.

In the month of March, when “undercutting” rose to prominence and many moment’s lowest-asks cratered 50% or more, contributing to a decreasing overall marketcap, new users continued to come in and explore the platform. While many may have been relying on pack drops and not investing through the marketplace, all indications remain that when registration is open, new users will continue to sign up at an impressive pace.

Even further, existing users didn’t let up on their overall engagement.

Top Shot has spawned an incredible ecosystem. With much of its transaction data and activity publicly accessible, and its entire premise built on an entirely new way to express your NBA fandom, moonlighting podcasters and data analysts have given way to and endless amount of resources and information to speculate and discuss what’s going on with Top Shot—every minute of every day.

The frenzy has been unrelenting.

In fact, since December, daily user sessions and average session time on NBATopShot.com outpaced that of two prominent investment platforms, Fidelity.com and Schwab.com, according to SEMRush.com. Yes that’s right, people are probably checking their Top Shot collection value and the marketplace more frequently than their equities portfolio, the latter of which is quite literally a window into what makes our world go around.

Websites like MomentRanks.com and LiveToken.co, new staples in the Top Shot ecosystem, are still too new to obtain reliable data, but you can probably assume they’d further confirm how frequently the Top Shot community is checking in and feeling a forced need to take action themselves, whether they really need to or not. 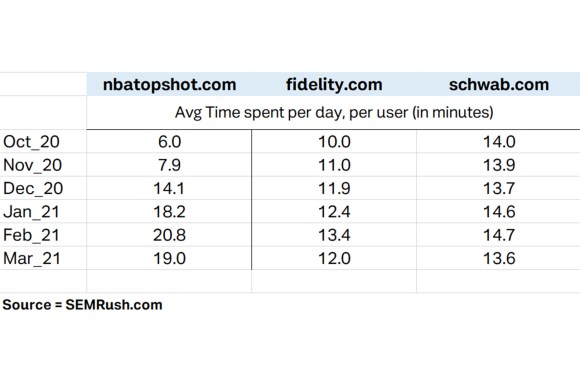 It’s all great as an indicator for future growth and success, but it asks the question if the amount of consumption is necessary, or even wildly unhealthy?

If you enter a new position on a stock, set up your dollar cost average strategy on Bitcoin, or buy a sought after Ja Morant rookie card, it’s very unlikely you are looking at their value incessantly (unless you day trade), with the intent to flip or, in the case of what’s happening too often in the Top Shot Marketplace with very little justification, panic selling for an immediate loss or small gain due to fear and impatience.

The speed and immediacy inherent to Top Shot certainly can be a good thing, but it’s brought with it a contagious reflex that if something exciting isn’t happening right at this minute, or the next minute, that Rome might start burning. And we might have too many people around to hint at that, and too many more to spread the news ourselves.

My suggestion? Practice some patience!

Maybe even embrace periods of boredom or de-prioritizing Top Shot. Look at the marketplace as a space rich with moments with cool stories built around them. Buy what you want, sell what you don’t, maybe check your account value a few times a week, then go on with your life. You’ll be blissfully ignorant to the the dangerous pump and dumps, quick price drops, and be better off for it. Top Shot will still be there, along with all those Sam Merrill’s Top Shot Debut moments.

I don’t believe Dapper Labs built this with the intent to demand your constant attention as a requirement to enjoy the platform and experience. The market may stabilize, FUD may diminish, and our general feeling about what we’re investing in may improve… if we just go fishing.

10 Wines to Buy with Your Seeing Stars Top Shot Pulls
Why I Believe in NBA Top Shot
Are NBA Top Shot Challenges Worth It? Yes and No!