About a year ago, Dapper Labs shook up the NFT landscape by launching NBA Top Shot. The platform that Top Shot introduced a new economy, mering sports and NFTs. And the ripple effect can be felt all the way into the National Football League.

What is NBA Top Shot?

NBA Top Shot is an NFT (non-fungible token) marketplace that lets users buy, sell and trade NBA moments. These moments are packaged highlights of players hitting 3 pointers, buzzer beaters, and other exciting video clips. These highlights are packaged together into a specialized trading card that users can interact with. On the platform, users can check the prices of their items, look at rarity and see what the last sales for their items were. They can also purchase more packsâ€”some of which are limited releases or limited to specific players. Packs are like trading card packs; they are opened and permanently destroyed to reveal the moments inside. Packs are purchased through the platform and can then be opened by the user.

What Network Is Top Shot On?

Unlike a majority of other projects and NFTs, this project is actually located on Flow blockchain as opposed to being on Ethereum. The Flow blockchain is a blockchain that is designed to be proof of stake. Proof of stake is when users stake or lock their crypto in order to earn rewards/interest and help support the network, which helps it act more efficiently and minimizes the carbon footprint.Â 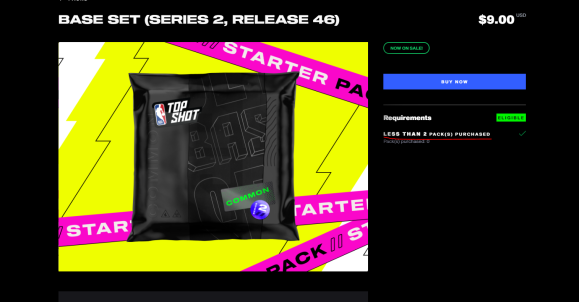 The creator of NBA Top Shot, Dapper Labs, was established in 2018 as a company that focuses on delivering blockchain-based experiences. They cater to an audience that does not come from a primarily crypto background.Â Â

â€œBut for this [blockchain] technology to realize its real-world potential, it needs to, yâ€™know, be used. By people. Real people, in the real worldâ€”not just industry insiders and early adopters.â€

Blockchain technology has been a very niche small group that has slowly grown in popularity.

Dapper Labs has already inked deals with huge brands both in and out of the crypto/blockchain sphere. It helps that their CEO helped build one of the first NFT projects, Cryptokitties. Dapper Labs has become a pioneer in the space, with a growing market share due to their connections and friendliness with users that are not initially super knowledgeable about crypto. While you can use popular crypto like ETH, Bitcoin, and stable coins, you can also use a credit card to purchase packs on the platform. And with some packs being sold for $9, itâ€™s more accessible for people who want to dip their toes in the water instead of chasing pfp (profile picture) NFTs like CryptoPunks that are worth more than most houses, with the current floor price being 107 ETH or more than $300,000.

Most people do not even know what the â€˜Fâ€™ in NFT stands for, and that affects adoption. NBA Top Shot and Dapper Labs have engineered a platform that enables users to trade and interact with NFTs without them needing months and months of experience in the space.

Professional sports leagues like the NBA have driven people into Top Shots that may have otherwise never looked at NFTs. Sports card collectors and other hobbyists have been part of an industry for decades that relied on the human/in-person element of card trading. That includes going to shows, showing off new card pulls, and of course going to the card shopÂ

The pandemic has limited the ability for collectors to meet in person to trade and pick up new packs and boxes of packs to open. With NBA Top Shot completely online, this had let long-time collectors feel the rush of opening new packs and flipping cards all from the comfort of their house. As this new streamlined method became more normalized, users began to look at other NFTs to flip.

What should we expect from the NFL version?

And now that excitement has started to trickle into other sports. In recent memory, DraftKings has created its own marketplace of NFTs of prominent athletes across multiple sports. But that marketplace as it stands is focused on individual athletes from multiple sports.

Today it was announced that Dapper Labs is going endzone deep into the gridiron.

Itâ€™s too early to guess exactly what the platform will look like. But we can use NBA Top Shot as a great guide. There may be specific packs and release special seasons and historic game collections. Top Shot is releasing a version of 2005-2006 Dwyane Wade, so it stands to reason that the NFL will dip into its archives of decades of spectacular plays and historic moments from the immaculate reception to Tom Bradyâ€™s seventh ring. Or maybe they’ll even have player-specific packs for legends like Warren Moon or whichever rookie becomes the next league MVP.

Just this past Sunday we had a game end with an NFL record-breaking field goal. Imagine opening a pack with this amazing moment.

If you want to talk about this with other NFL NFT fans be sure to join our Discord, and if you want to be in the know for future NFT insights, be sure to follow our Twitter.