There’s no denying NFTs have become a catch-all solution to monetize any and all creative work.

Buried throughout the ocean of high-profile individuals flocking to crypto art as a get-rich-quick scheme are those who embody the spirit and ethos of permanent digital media.

This post spotlights one of those very actors—Scott Hansen—as he dives headlong into web3 through a foundation that was seemingly developed exactly for this future.

Having spent the past two decades creating visual art as ISO50 and music as Tycho, Hansen is taking his first step into crypto art with his forthcoming TYCHO : ISO50 collection on Nifty Gateway on April 15th.

Starting his career as a graphic designer, Hansen fell in love with creating cover arts under the moniker ISO50. The name references a type of slide film, personifying his passion of giving audio a more physical, real experience through visual art.

This portfolio—now housed at iso50.com—has started to resurface in recent weeks. Detailed throughout his collections are commissioned works, show posters and cover arts from projects past. Having won accolades such as the FWA awards, ISO50 was an industry leader—making its way to everything from corporate clothing apparels to niche communities like Pretty Lights. 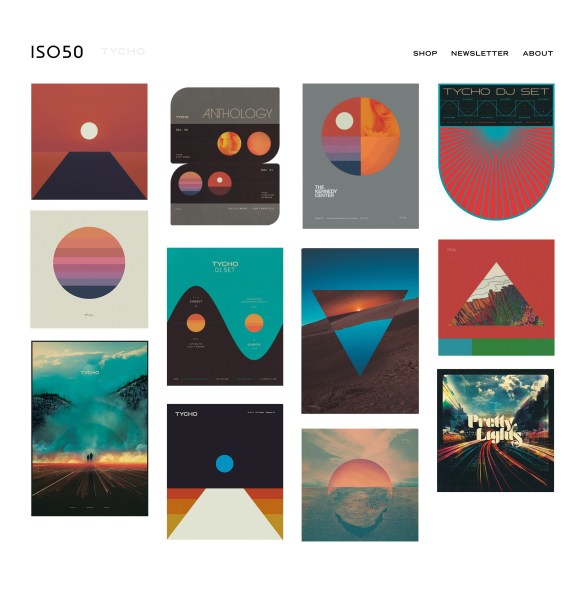 It’s no surprise that Hansen soon tried his hand at audio to accompany his visual works. The birth of Tycho was a direct output of the ISO50 operating system, acting as the soundtrack for the imagery and visual world that is ISO50.

Offering a nostalgic edge, Tycho’s sound is meant to capture a moment in time. As the vague approximations of time shift and evolve, Hansen’s creative output offers a bedrock to immortalize a timestamp in the listener’s life.

Naturally, this is where NFTs come into play.

“Video has never found a meaningful home, until now” comments Hanen. His first foray into the space—Element—offers a glimpse into the past, present and future of TYCHO : ISO50. The collection showcases four unique locations, each earmarked with a specific natural element and a score of unreleased music.

“I’ve always been drawn to the intersection of audio and visual and have spent my career creating works that seamlessly melds the two,” commented Hansen. “This story showcases the natural evolution from visual to audio—offering a glimpse into the future of how these mediums live in harmony thanks to web3.”

Whether you’re a Tycho fan or not, there’s no denying that the mending of these two worlds is the exact audio visual experience that many collectors have come to know and love. With the winner of the 1/1 auction receiving lifetime VIP (+1) passes and a virtual studio tour, his first release teases a growing ISO50 virtual universe—one which this writer is stoked to be a part of.

And what use might that lifetime pass have? Tycho just sold out his first 6 shows of 2021, bringing his talents to the scenic wine country of St. Helena in early June. To the winner of the 1/1—the first TYCHO : ISO50 shows in 10 years are just a bid away.

Until then, fans can rest assured that Tycho is starting a new chapter, one in which the community ownership takes center stage.

If there was ever a time to become a Tycho superfan, it’s now.

Be on the lookout for more information from Tycho in the coming days as he frequents Discord server, Clubhouses and chat groups near you.

To the artists out there, let this story show that audio visual work has found a home in web3, and creators like Scott Hansen are bound to show why this page in history is sure to leave a mark.