You might have recently heard of Boss Beauties, an NFT collection of 10,000 unique, independent and diverse women. Not only is it the first NFT to be featured on the New York Stock Exchange and to have a partnership with Marvel Entertainment, it just announced a new groundbreaking announcement with Coinbase.

Coinbase announced that Boss Beauties will be part of its initial launch, along with other notable NFT projects such as Bored Ape Yacht Club, World of Women, and VeeFriends.

These big announcements have helped the project gain traction over the past few months (the project now sits at a 1.3 eth floor at the time of publication), but founder Lisa Mayer has been building communities for girls through Boss Beautiesâ€™ sister company My Social Canvas for years.

My Social Canvas is a social enterprise that has been around for over 10 years, helping provide educational and professional opportunities to high school and college-aged girls all over the world (15 different countries).

While the company has made major stridesâ€”hosting hack-a-thons with Apple, mentorship panels, and events with notable women including Olympic athletes and CEOS, and funding thousands of scholarships to its membersâ€” Mayer wanted to do something more with the company, something that would continue to further its mission.

She and her team decided to start dreaming up and developing an NFT project.

â€œDuring the pandemic, I was looking for other ways to fund our mission,â€ Mayer said. â€œI founded Boss Beauties NFT as an extension of the deep passion I have for the next generation of women.â€

She and her team wanted the collection to represent all types of women, different ethnicities, career paths, and industries. The traits with different eye colors, hair colors, eyebrows, clothes, and backgrounds represent that. 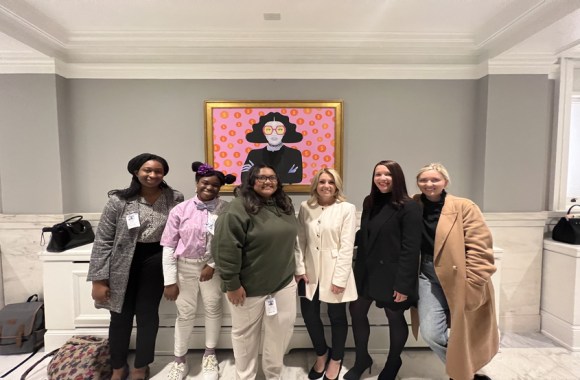 â€œWe wanted someone to look at the collection and have everyone be able to find someone that they identified with,â€ Mayer said. â€œNot just physically, but career-wise as well.â€

Some occupations featured in the collection are construction workers, police officers, gamers, entrepreneurs, and even one that says â€œfuture CEO.â€

My Social Canvas mainly caters to a Gen-Z community, which is why one of the NFT properties is called â€œFuture CEO,â€ meaning to encourage and inspire women to become whoever they want to be.

There are also special ones such as â€œThe Caregiver,â€ which is symbolized by the baby carrier and was created to celebrate all the amazing women caring for a child, or someone who is sick, elderly, or disabled.

The â€˜Caregiverâ€™ is deeply personal to Mayer because she founded Boss Beauties after a difficult pregnancy, only 3 months after giving birth to her son Hudson.

They wanted to feature women who might not otherwise have representation in mainstream projects and collections, such as a woman with a hijab.

For those who want to support female-centered NFT projects in the male-dominated space, people often ask â€œwhich female project should I support?â€ That question isnâ€™t inherently wrong.

Mayer gets asked very frequently how her project is different or worth buying, compared to similar projects like World of Women, Women With Weapons, CryptoChicks, and Women Rise (who also contain thousands of randomly generated women with different features and give back to female communities.)

Mayer says she feels that in the NFT space, projects created by women are often compared more. But, she thinks it shouldnâ€™t be that way because all the collections have something really beautiful and unique about them.

â€œSome are more focused on advocacy, or on art,â€ Mayer said. â€œI donâ€™t look at it as competition because none of us are meant to be competing. Weâ€™re just differentiating our different passions.â€

Mayer puts her money where her mouth is. Early on, Boss Beauties pledged 5% of its profits to another emerging female-led NFT project, Fame Lady Squad.

â€œWe wanted to help them out because we support each other,â€ Mayer said. â€œYou donâ€™t have to just choose one, you can buy all of them.â€

With women only making up 16% of the NFT art market, itâ€™s more essential than ever to be working together rather than against each other.

When asked about the constant discrepancies and prejudices that women face in the space, her stance is realistic but optimistic.

â€œI do think thereâ€™s a lot of work to get done, but I think thatâ€™s something that we can all work together to make happen,â€ Mayer said. â€œWe need to do that now, or else in 10 years when the space is larger itâ€™ll be too late.â€

The Future for Boss Beauties and holders

In terms of future utility and benefits, Boss Beauties recently released its Boss Beauties Book Club, where free books are being shipped out to holders.

Mayer says she canâ€™t reveal much about the upcoming Marvel partnership, but that big things are coming early 2022.

â€œWeâ€™re in talks with other potential exciting partners,â€ Mayer said. â€œWe are planning for 50 years into the future.â€