Throughout its 24-year history, the WNBA has seen extreme swings of highs and lows. From the league’s conception in 1996 to the recent rise in popularity we’ve seen the league enjoy, the history of the WNBA is a storied one. Here is our list of every WNBA champion ever. 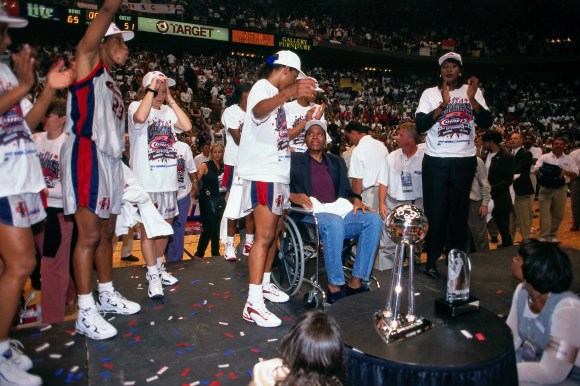 In the first-ever WNBA playoffs, the four teams with the best regular season records were seeded one to four. The Comets (18-10) and Liberty (17-11) both entered the playoffs as the top-ranked seeds on their side of the bracket, with the Comets maintaining the home-court advantage. Cynthia Cooper became the first WNBA Finals MVP after putting in 25 points and 4 assists in the sudden-death championship game. 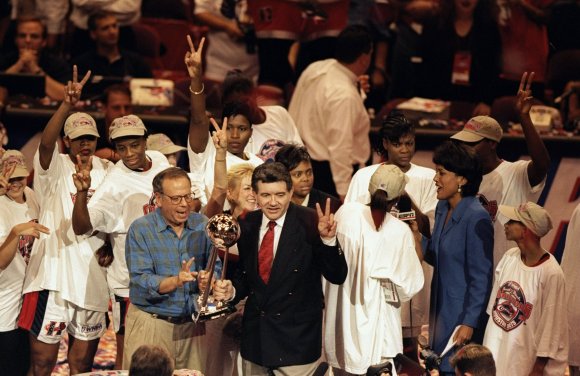 The second annual WNBA Finals marked the first time the series was held in a best-of-three format. The Comets were more than dominant this season, posting an exceptional 27-3 record. The Mercury took a tight game 1 by three points, but Cynthia Cooper proved to be too much for the Mercury. After back-to-back 20+ point performances, the Comets took home their second consecutive WNBA title. 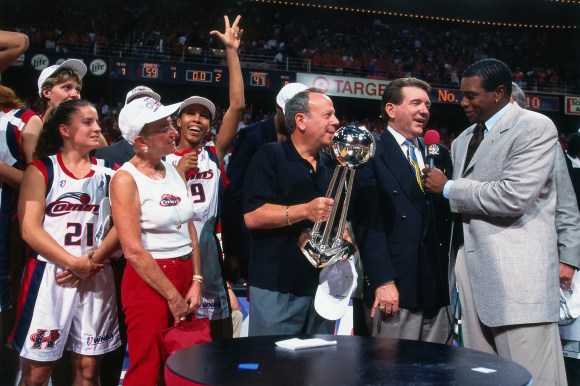 The Liberty and Comets would reunite in the 1999 WNBA Finals to give us a rematch of the first-ever championship game. The Comets continued their regular season dominance, posting a regular season record of 26-6. Cynthia Cooper led scoring in game three with a 24-point performance, securing herself a third WNBA Finals MVP. 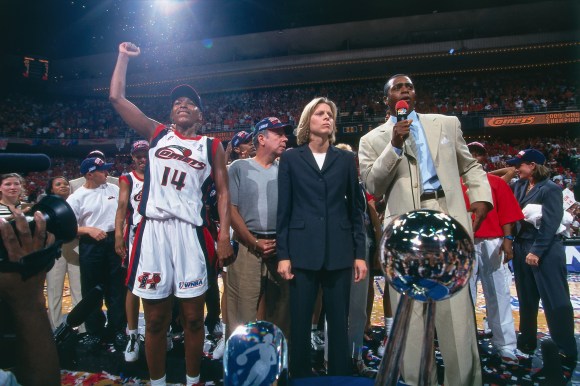 The Houston Comets vs New York Liberty trilogy would come to an end in 2000, as this would mark the last time these two franchises ever went up against each other in the finals. The Comets continued their dominant streak, claiming a fourth straight WNBA championship. Sheryl Swoopes was dominant in the close-out game, putting up an exceptional 31-point performance. 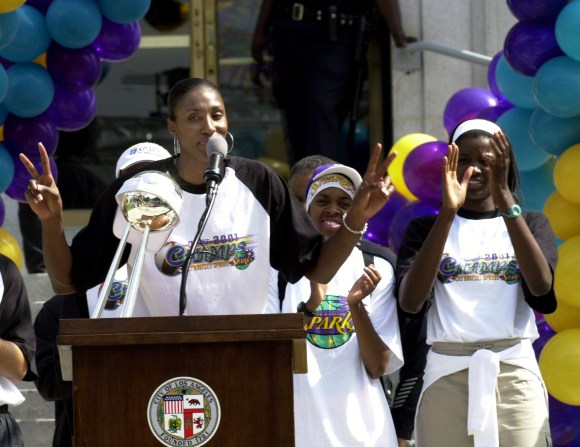 After the most dominant four-year stretch in WNBA history, the Houston Comets dynasty fell and the Los Angeles Sparks took their spot on the WNBA mountaintop. Lisa Leslie took home her first career finals MVP after averaging 24 points and grabbing 13 rebounds in a close-out game two. 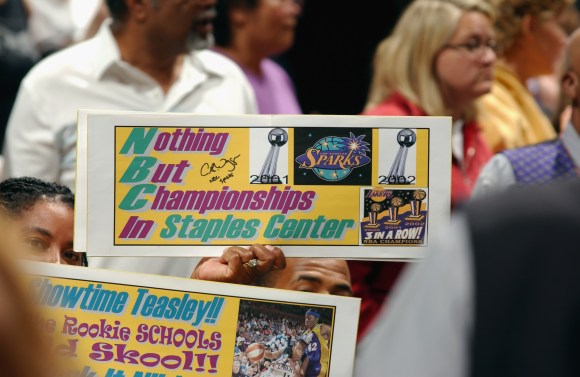 Lisa Leslie cemented her place as one of the greatest WNBA players ever after claiming a second WNBA Finals MVP. This marks the last time we’ve seen a back-to-back WNBA champion. The Sparks were able to edge the Liberty in game 2 69-66 to close out another championship. 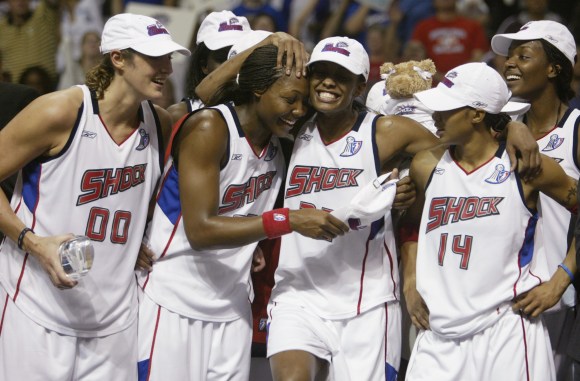 The Detroit Shock would win their franchise’s first WNBA championship in 2003 after defeating a Sparks team attempting a three-peat. Ruth Riley was electric in game three, Putting in 27 points en route to a five-point win. This would mark the first championship of three in a dominant early 2000s for the Shock. 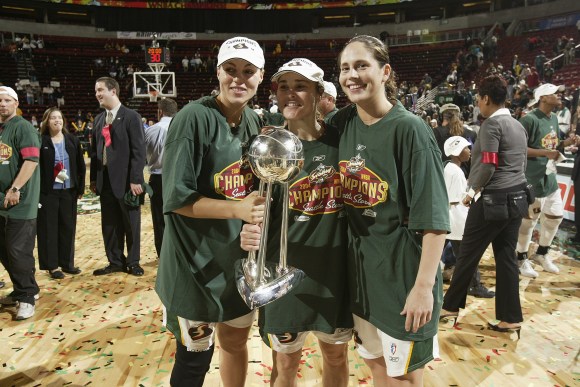 The Seattle Storm have been one of the most dominant WNBA teams over the course of the league’s history. They would get their first taste of winning in 2004 after defeating the Connecticut Sun in three games. Betty Lennox was seminal in the Storm winning, as her 20+ point performances in games two and three helped push the Storm past the finish line. 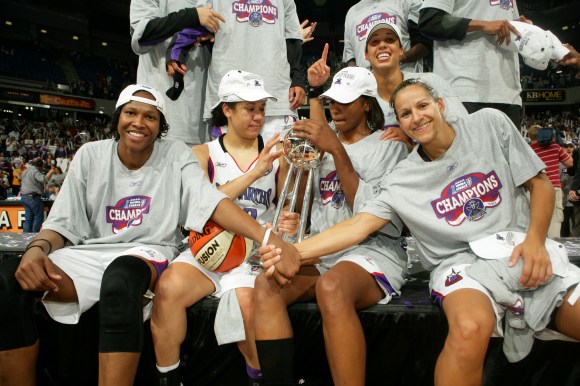 The Sacramento Monarchs won their franchise’s first and only WNBA championship in 2005. This was the first time the WNBA went with a beat of five series for the WNBA Finals, a format the league still uses today. Yolanda Griffith pushed the Monarchs over the Sun in game four after posting a 14-point and 10-rebound double-double. 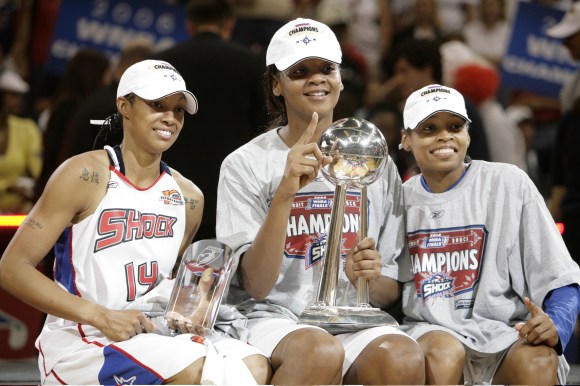 The Detroit Shock would secure a second WNBA championship after beating the Monarchs in the first-ever WNBA Finals game five. The Shock edged out the Monarchs 80-75 in the sudden death game. Deanna Nolan’s 24 points in a closeout game secured her the finals MVP. 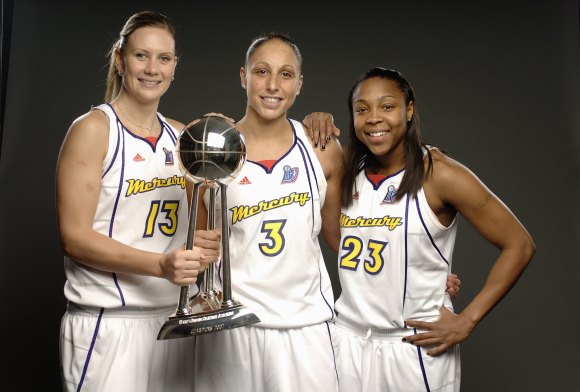 2007 would mark the first time we saw legendary guard Diana Taurasi win a WNBA championship. The Shock had the best regular season in the league and were looking dominant. As the finals headed to Detroit for game five, Cappie Pondexter put up 26 points and 10 assists to secure Phoenix the championship. This was the first time a WNBA Finals was won on an opponent’s court. 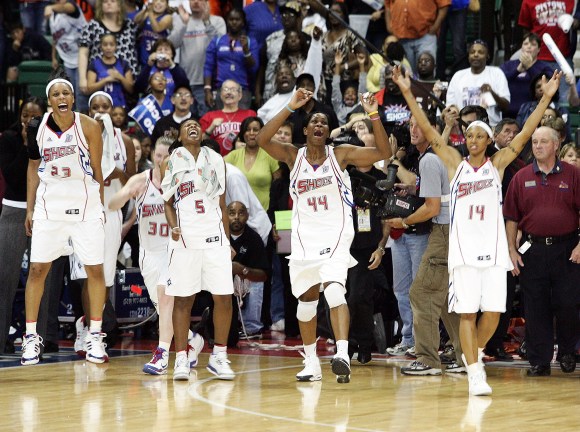 The Detroit Shock would finally claim their spot upon the WNBA mountaintop in 2008, and it would mark the last time the franchise would ever win a championship. Katie Smith dominated the Stars all series, averaging 20+ points across the three-game sweep. The Shocks would soon dissolve in 2009. 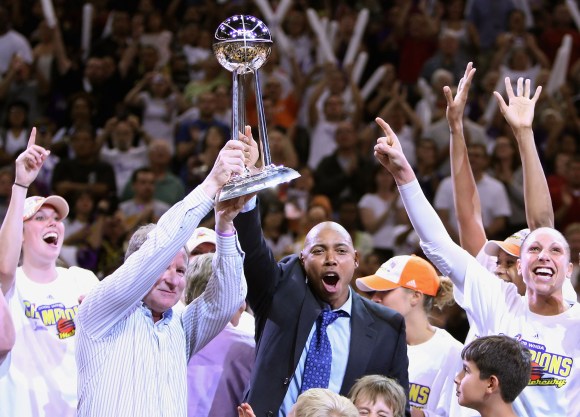 The Mercury would claim their franchise’s second championship after defeating the Indiana Fever in five games. In a closeout game five, Diana Taurasi put in a game-high 26 points, securing her first WNBA Finals MVP. Game five of the 2009 WNBA Finals is constant action and one of the most memorable games in WNBA history. 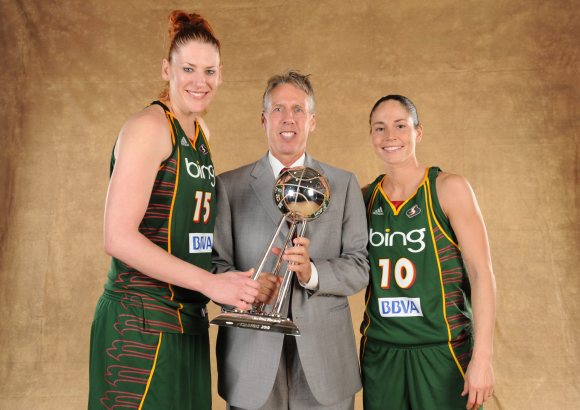 After struggling to get past the first round of the playoffs, the Storm did all that and more in 2010 with a second franchise title. Australian basketball legend Lauren Jackson led the way for the Storm, dropping 25+ points in games one and two. This was the second championship for the duo of Sue Bird and Lauren Jackson. 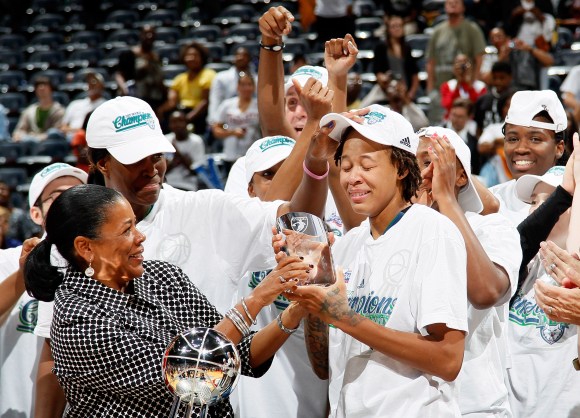 There have been few teams as dominant in the WNBA as the Minnesota Lynx, and in 2011 they would get their first taste of success. They took down the Atlanta Dream in a three-game sweep that frankly wasn’t close. Seimone Augustus had an all-time performance in game two, putting in 26 points and grabbing 8 rebounds. 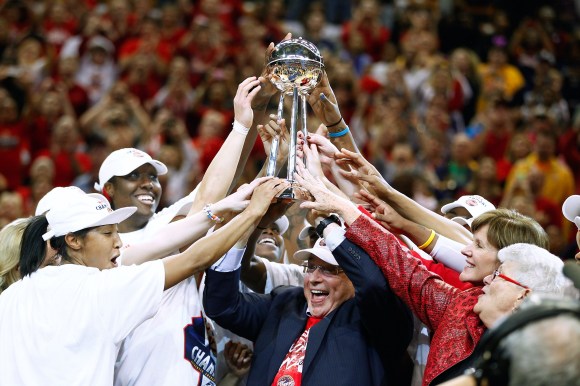 The 2012 WNBA Finals gave us a fierce battle between the Indiana Fever’s Tamika Catchings and the Minnesota Lynx’s Seimone Augustus. Both players battled it out and gave the opposition buckets throughout the series. Catchings was able to edge out Augustus and drop 28 points in a close-out game four, giving her a first WNBA Finals MVP. 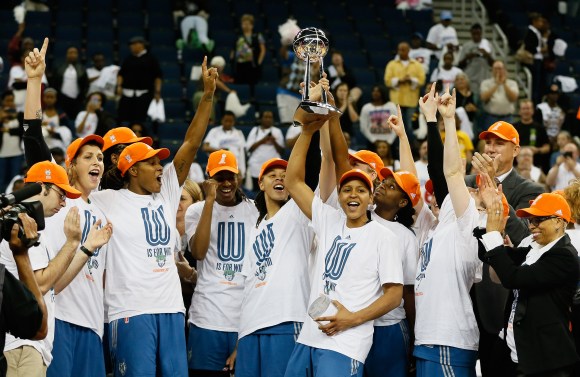 The Minnesota Lynx would reclaim their spot as WNBA champions in 2013 after a rematch of the 2011 WNBA Finals against the Atlanta Dream. The results were the same as in 2011, with a fairly easy three-game sweep. The Lynx won games one and two by 25 points. Maya Moore led the Lynx in scoring during games 1 and 3, securing her WNBA Finals MVP. 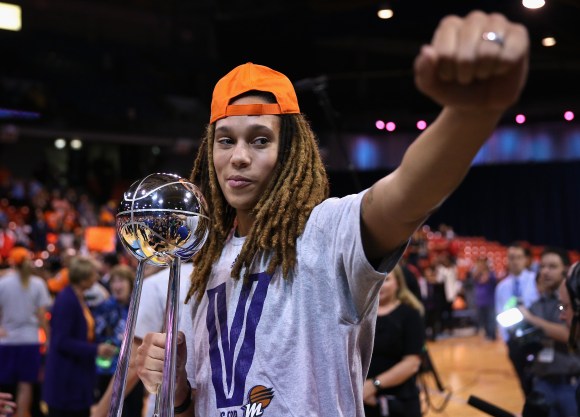 Diana Taurasi would win her second WNBA Finals MVP in 2014 after a three-game sweep against the Chicago Sky. This series was never really close with two huge blowout wins coming for the Mercury in games 1 and 2. The Sky were able to keep game 3 close, but the Mercury were able to edge it out by five points to claim another title. 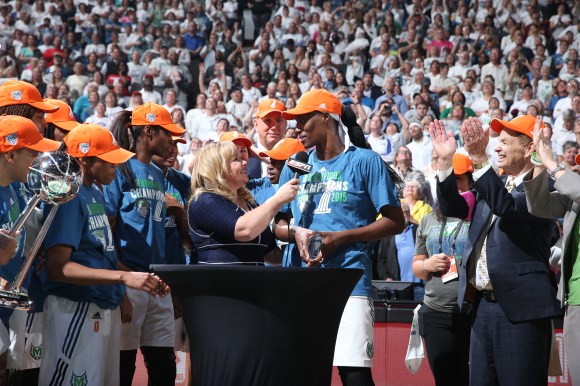 It was Minnesota’s turn to claim their spot as the WNBA’s best once again in 2015. The series went back and forth, ultimately forcing a sudden death game five. Sylvia Fowles led the way in scoring, putting in 20 points. This was Fowles first WNBA Finals MVP in her historic WNBA career. 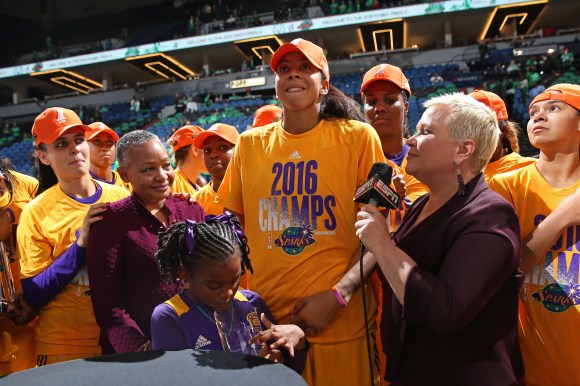 2016 would mark the second consecutive year we saw a future Hall of Famer win the WNBA Finals MVP. Candace Parker helped lead the Sparks to the franchise’s third WNBA championship. In game four she was spectacular, putting in 24 points en route to a 17-point win. 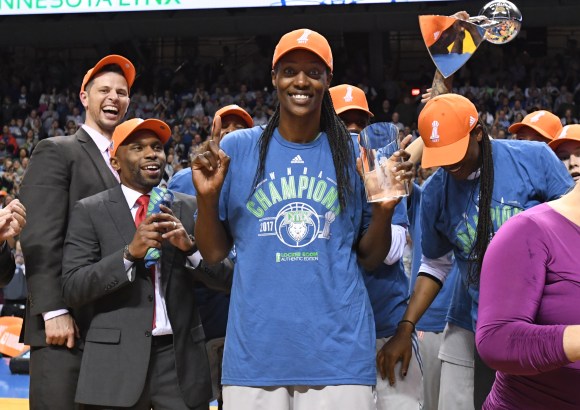 The Lynx and Sparks would meet again in 2017 for a rematch of the previous year’s WNBA Finals. Sylvia Fowles proved to be too much for the Sparks to handle, as she grabbed 20 rebounds and put in 17 points, claiming a second WNBA Finals MVP. 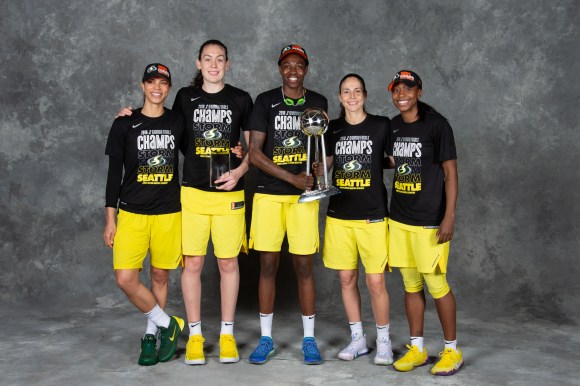 2018 was undoubtedly the year of Breanna Stewart in the WNBA. The third-year forward out of Connecticut was otherworldly throughout the regular season, claiming her first MVP. The Storm easily took down the Mystics in three games, winning each game by 10+ points. Breanna Stewart put in 30 points in a closeout game three, securing her the WNBA Finals MVP. 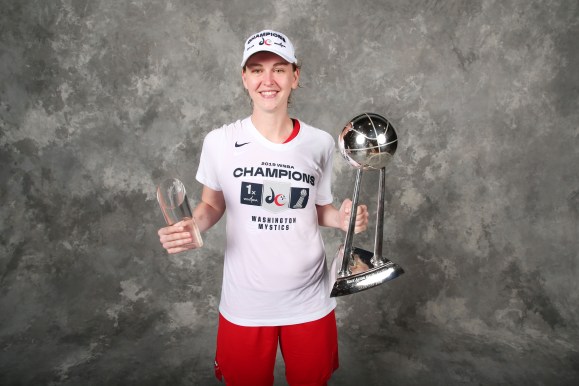 The Mystics claimed their franchise’s first WNBA title in 2019 after defeating the Connecticut Sun. The series would be pushed to five games after an epic double-double from Suns forward Jonquel Jones. Emma Meesseman’s game-high 22 points would close out the series in game five, however. 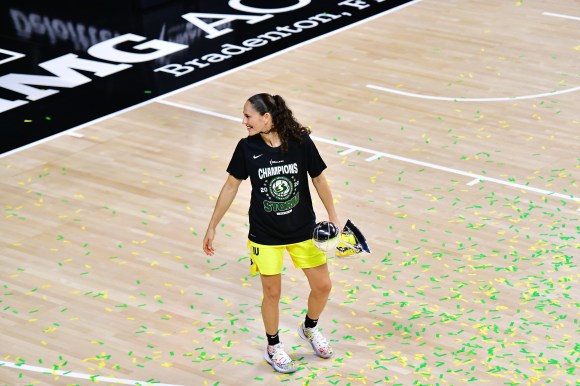 Sue Bird would win the last WNBA title of her storied career after a three-game sweep of the Las Vegas Aces. This series was held in the ‘WNBA bubble’ due to the ongoing Covid-19 pandemic. Breanna Stewart was otherworldly in game one, putting in 37 points. She would follow that up with 20+ point performances in games two and three to secure a second career WNBA Finals MVP. 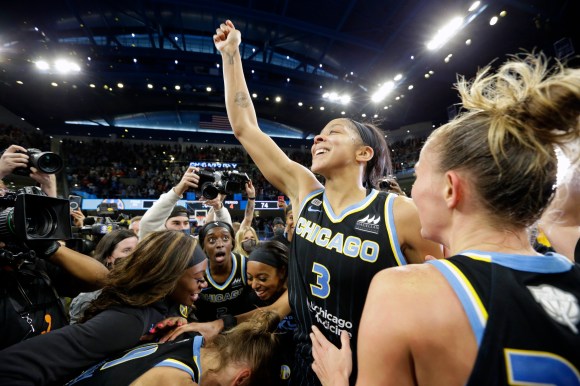 Candace Parker solidified her status as a Chicago legend, helping lead her hometown to its first WNBA title. Kahleah Copper was seminal for the Sky throughout the series, always available when a bucket or rebound was needed. The Sky would take game five by six points after an all-out performance from the Skys’ big three of Quigley, Parker, and Vandersloot.

5 Storylines to Follow During the 2022 WNBA Finals
When Did the WNBA Start?
WNBA Star Brittney Sykes Talks to ONE37pm About Her Career, Life in LA, and More