Peep these stats – the last time WWE went to the United Kingdom for a major stadium event was SummerSlam ’92 and the last time the company landed in the same region for a PPV was Insurrextion ’03. Now in 2022, the world’s largest wrestling organization (that’s now headed by Stephanie McMahon, Nick Khan, and Paul Levesque!) is doing right by its UK fans by emanating a PPV from there on September 3. Taking place at the Principality Stadium in Cardiff, Wales, WWE’s ready to introduce us to a clash of the ages. Now with all that being said, let’s get into all my WWE Clash at the Castle 2022 predictions.

WWE Clash at the Castle 2022 Predictions 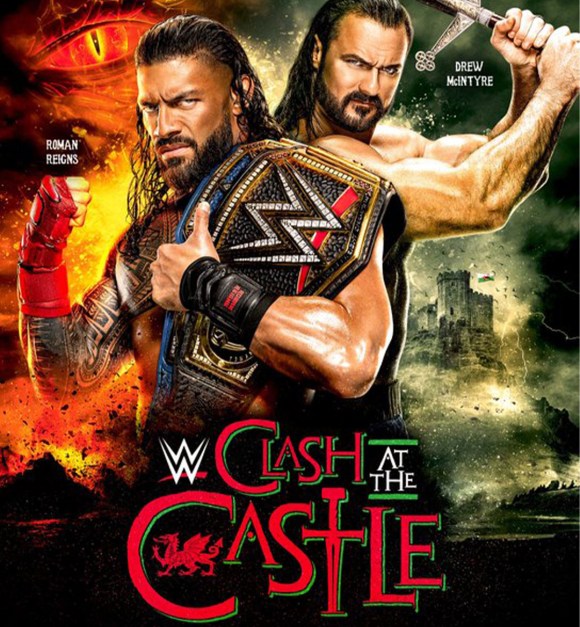 Preview & Predictions: What’s on delivery here is brutality personified! For years, Sheamus has been known for getting himself involved in some of the most bone-rattling matches against the likes of Drew McIntyre, Cesaro, and Randy Orton. In the case of Gunther, his past and present exploits speak for themselves. He chops the soul out of everyone he meets and boots his opponents into another galaxy when given the chance to do so. And now, both of these UK-born brutes are gonna attempt to beat the hell out of each other for the IC title.

This match is pretty much the perfect match to book for WWE’s PPV return to the UK. The promise of these two powerhouses chopping and bashing each other’s chests red is very high. Sheamus is always known for putting on the hardest-hitting performances on every show he’s booked on – Gunther’s gonna provide him with the perfect barroom brawl dancing partner to create another one of those entertaining showings.

For my WWE Clash at the Castle 2022 predictions regarding this bout, I’m siding with Gunther here. His IC championship reign is just gathering steam and Sheamus is just gonna be another name added to his reign of dominance.

Preview & Predictions: Excitement is in the air regarding the women’s divisions on both Raw and SmackDown! At SummerSlam, Bayley made her grand return from injury with Dakota Kai and the newly renamed IYO SKY by her side to square off with Bianca Belair and Becky Lynch. Now the Raw Women’s Champion has her hands full with a former rival of hers and her two dangerous allies. Luckily, Bianca has some backup of her own to help even the odds. Both trios of ladies are now set to go to war in this six-women tag team match.

Now that Bayley is back at full health and aligned with two fan-favorite NXT call-ups, she’s in one of the best positions she’s ever been in her career. It’s quite evident to me and everyone else that Bayley’s being set up for a future title shot at Bianca’s prize – this bout is clearly being set up to cement that upcoming PPV contest. I’m predicting that Bayley will find a way to pin the champion here whilst the other four women get caught up in their own scuffle outside the ring. When Bianca least expects it, she’ll get floored by Bayley and fall in defeat. That loss will lead to both women getting into some singles action at this year’s Extreme Rules, for sure!

Preview & Predictions: During the “SmackDown Six” era, one of the tag teams I fell in love with consisted of Edge and Rey Mysterio. They used their combination of nimbleness and high-flying abilities to have some bangers with the four other members that made up the rest of SmackDown’s very best. Now here we are in 2022 and both men have joined forces once again to clash with The Judgement Day’s Finn Bálor and Damian Priest. Edge has come for revenge on his former stablemates and Mysterio is joining him to get his own measure of revenge for his son as well.

So here’s the thing – The Judgement Day has been eating immense L’s as of late. They lost at SummerSlam, plus Damian Priest fell to Edge on a recent episode of Raw. It’s high time that this stable finally gets a major win that adds a bit of steam to their current run. I’m imagining a situation where Mysterio ends up being the weak link of his team, which will give Bálor and Priest all the confidence in the world to zero in on him. My WWE Clash at the Castle 2022 predictions are pointing towards Judgement Day getting a major PPV victory here.

Preview & Predictions: Is Liv Morgan pulling the wool over everyone’s eyes with her whole babyface act? At SummerSlam this year, she sat outside the ring and smiled amidst all the chaos produced by Ronda Rousey’s angry post-match attack. And I feel her – she clearly made the champ tap out, but the ref only managed to catch Ronda being pinned while Liv gave up. Now I’m starting to think that Liv is putting on a farce with her current shtick and is going to pull out all the nefarious stops to defeat anyone that comes for her championship.

It’s kinda crazy that one of Ronda’s best friends is now gunning for Liv’s title after Ronda emerged unsuccessful during her attempt to do the same. Now that Hunter is in control of creative, he’s clearly giving his former NXT standouts a chance to truly mean something on the main roster. Shayna Baszler is a clear example of that new edict. Now Shayna sticks to the same game plan Ronda’s known for – stiff strikes and punishing submissions. Liv is clearly out of her league here and should realistically fall in defeat to Shanya here. But I guarantee that Liv will find some sort of screwy way to get one over on her latest challenger that will be similar to the way she screwed over Ronda. Liv’s leaving with the belt here.

Preview & Predictions: Why was this planned match at SummerSlam canceled? I NEED ANSWERS! Anyways, I’m pleased with the fact that this match has been rebooked for this show instead. Since Randy Orton is currently on the shelf, Riddle’s gone the singles route once again. Which I don’t mind one bit since I get a kick out of watching him put on bangers on his own on a weekly basis. Setting him up against another modern-day in-ring great in Seth Rollins will only lead to PPV greatness here.

So here’s what I’m expecting – this is just the first of many “premium event” encounters between Riddle and Rollins for the year. And to keep this feud going strong over the next couple of months, I foresee Rollins finding some type of cheap way to get the first big win over his latest rival. By hook or by crook, Rollins will pull away with the win here. That win won’t bring this war to an end so quickly, though. Riddle will be seeking his revenge on Rollins in a hardcore match of some kind at the following month’s Extreme Rules, I presume.

Preview & Predictions: Roman Reigns has been running roughshod over anyone and everyone that’s been put in his path. Now that he’s running around the WWE landscape with both main shows’ top titles, he’s the current king of the mountain that’s only going to be defeated via a Herculean task. The man that’s stepping up to try his damndest to fulfill that task is Ayr, Scotland’s very own Drew McIntyre. As one of WWE’s top UK stars, this high-pressure situation is placing Drew in one of the most important title matches of his life within his home country.

Now here’s the current situation – Karrion Kross recently made his shocking return by assaulting Drew, which led to rumors of Kross possibly being set up against Roman for a title match for one of his belts. Since that doesn’t seem to be the case anymore, I presume this match is going to go straight down the middle without any sort of interference from Kross. I’m fully convinced that Drew is coming home to win himself a damn championship! Roman’s going to relinquish his Undisputed WWE Universal Championship to the conquering babyface – BANK ON IT!

And I can also see Kross rising up to get himself involved in the continuing title feud between the new champion in Drew and the former titleholder Roman.