Becky Hammon. Trailblazer, warrior, and one of the GOATs. By now you’ve already heard that Hammon is the new head coach of the Las Vegas Aces, but make no mistake, Hammon is that chick and has been for a very long time. Through the course of her NBA career, Hammon was a six-time All-Star, making the All-WNBA first team twice, and obviously Hammon has continued to raise the bar becoming the first full-time female assistant coach in any of the four major professional sports in 2014. 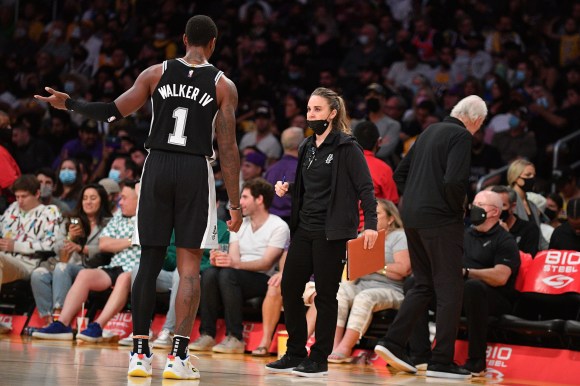 The legend followed up that major accomplishment a year later when she became the Summer League’s first female coach, and made history again when she became the first female acting head coach in NBA history when Gregg Popovich was ejected during a game against the Los Angeles Lakers. The good sis has been at it for a long time, so we decided to do a throwback to a few of her top moments as both a player and coach. Here’s a look back at five.

Let’s rewind back to the year 2000. The then 21-year-old Hammon took on New York Knicks superstar Allan Houston at the 2Ball competition where she eventually placed fourth. This is a fun little throwback to a much simpler time. Don’t you miss the 2000s?

The WNBA put together this dope montage of Hammon’s biggest career highlights, and first on the list was her half-court buzzer beater to end the second half in a matchup against the New York Liberty. Also included in this video is her back-to-the-basket scoop shot against the San Antonio Stars which was the ultimate definition of finesse.

Hammon’s time at Colorado was nothing short of historic, filled with NCAA appearances and plenty of all-time records including: points, points per game, and free throws per game. Hammon has since gone on to be inducted into the Colorado State University Sports Hall of Fame, and had her number retired at the Moby Arena in 2005.

We had to include. We had to. This was such a historic moment full of inspiration for young girls and women around the world. With San Antonio Spurs head coach Gregg Popovich being ejected in a November 2019 matchup against the Portland Trailblazers, the head coaching duties were left up to Hammon. Powerful.

We had to end it with the legend herself receiving one of the biggest sports honors in the universe. Every athlete dreams of seeing their number hang in the rafters, and that dream came true when the Stars made it officially official on June 16th, 2016 putting the final stamp on an illustrious career.

Becky Hammon has accomplished so much in her still relatively young career, and we can’t wait to see what she does next.

Becky Hammon Returns To The WNBA At The Right Time
Ranking The Five-Best WNBA Games In 2022
Yes, Drake Should Own A WNBA Team