The first major goal for the U.S. Men’s National Team in 2022 was to successfully qualify for the 2022 World Cup in Qatar.

After a hard-fought 14-match cycle in Concacaf, the Americans were able to complete that job on Wednesday despite losing to Costa Rica.

It’s never an easy task or a given considering the hostile environments and physical teams the USMNT faces during World Cup qualifying, but now the Americans can turn towards their ultimate goal; the World Cup.

The Yanks won’t travel to Qatar until November for the kick off of the world’s greatest sporting spectacle, but there is a short turnaround with Friday’s World Cup draw.

That’s when the U.S. and 31 other nations will be drawn against one another in eight groups of four.

This is the last time for the foreseeable future that a World Cup will only feature 32 countries, with the 2026 edition of the tournament expanding to 48 nations.

There will be plenty of expectations for this American side led by Christian Pulisic, Gio Reyna and Weston McKennie, so ONE37pm decided to take a look at some of the best and worst-case scenarios for the USMNT ahead of Friday’s draw.

How Does the Draw Work?

Just a quick reminder, there will be 32 teams up for selection on Friday being drawn into eight groups.

There are four pots of eight teams to select from, with teams like Brazil, England and Portugal in Pot 1 (top-ranked group). 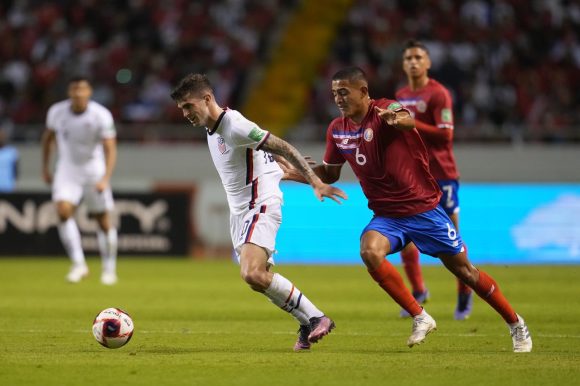 As hosts of the World Cup, Qatar has also been placed in Pot 1 and they’ll be automatically dropped into Group A.

From that point, teams will be drawn so that one Pot 1 team will be in Groups B-H and then they’ll move onto Pots 2-4.

The USMNT is in Pot 2 after being ranked 15 in the latest FIFA World Rankings.

Let’s preface this by saying everything here is hypothetical and the draw won’t take place until tomorrow, but that doesn’t mean we can’t play out some doomsday scenarios real quick.

The U.S. will obviously be hoping they can draw a side like Qatar from Pot 1, but if that doesn’t happen then there’s a guarantee of taking on a top 10 FIFA-ranked nation.

In this case, it would be Brazil, who’s only lost two matches over the past two years. The South American giants have one of the strongest teams in the World Cup led by Neymar, Casemiro and Thiago Silva.

Being grouped against Serbia and Cameroon won’t make life for the U.S. any easier.

Serbia boasts one of the best young strikers in football with Dušan Vlahović, while Cameroon has an extremely quick attack that can cause great difficulties for any opponent.

Having to face the World Cup champions and arguably the deepest team in the tournament wouldn’t be ideal by any stretch, but to make matters worse the U.S. would also get the African champions and one of the most improved teams in South America.

Senegal has a core of amazing Premier League and European talent, including Sadio Mane, Edouard Mendy and Kalidou Koulibaly, while Ecuador looked significantly better during qualifying.

Drawing Qatar would be the dream scenario for the Americans not only because they’re the weakest Pot 1 nation but also due to the fact the USMNT has some familiarity with them.

The U.S. faced Qatar in last year’s Concacaf Gold Cup, beating the Middle Eastern side in the semifinals.

Out of all the African teams in Pot 3, Tunisia would definitely be the best option for the U.S. given their ranking and who they had to face in African playoffs.

Meanwhile, drawing a team like Peru wouldn’t be a cake walk, but there’s a lot of familiarity with the South American side boasting many MLS players.

Outside of drawing hosts Qatar from Pot 1, every other seeded team is going to present a challenge in this tournament.

Belgium is still a top side, but they’re definitely not the powerhouse the U.S. faced at the 2014 World Cup in Brazil.

And if the true goal is to simply make it out of the group stage, this would be one of the easier paths for the Americans even if they can’t pick up a point or three against Belgium.

Facing a team like Poland with one of the best strikers in the world isn’t ideal, but the Americans have shown throughout qualifying that they’ve improved significantly defensively.

In fact, the USMNT didn’t concede more than two goals in any match during World Cup qualifying.