For nearly 43 minutes of Saturday’s Denmark-Finland meeting at Euro 2020 it was a normal football match. A scoreless draw nearly taking the two teams into halftime, the unexpected that followed not only delayed the match but put a sickening feeling in the guts of many around the world that looked on.

When Christian Eriksen collapsed just prior to the first half whistle blowing there was uncertainty and tension inside the Parken Stadium and for everyone that consumed that match in person and via their televisions.

Life can be fleeting and taken for granted, especially in sports. Athletes are seen as larger-than-life figures that mirror more superheroes than those that may work a 9 to 5 job on a regular basis.

Eriksen, who plays his club football at Inter Milan in Serie A, is believed to be in the prime of his professional career. A seemingly healthy 29-year-old midfielder that helped his club team win their first domestic title in nearly a decade last month.

The power of sports is quite incredible when you break it down to its core. On most days there are winners and losers, but regardless of the result supporters have the opportunity to delve into something that can take their minds off of the monotony of their daily lives.

On Saturday, it wasn’t about the result of the match. The only thing that mattered was Eriksen’s health and providing assurance that he would live to see his longtime partner Sabrina Kvist Jensen and their two children once more. 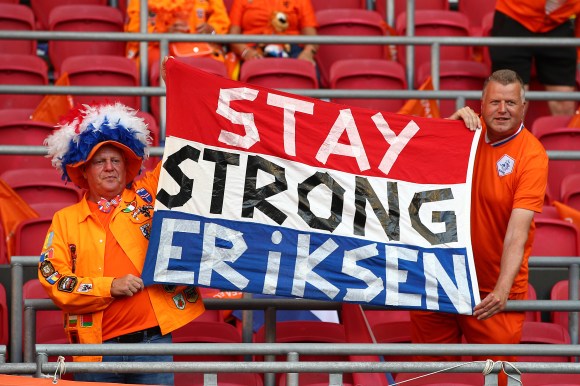 As Jensen ran onto the pitch and stood near midfield, she was consoled by two of the heroes of the day, teammates of Eriksen’s — Simon Kjaer and Kasper Schmeichel. In that moment, the trio could only pray that their loved one would pull through as medical staff did their jobs at a time where sheer silence ripped through the stadium.

Kjaer was confirmed to be the first person to alert medical staff and even began to perform CPR on his teammate before they could rush onto the pitch to continue the attempts to save Eriksen’s life.

The rest of Eriksen’s Denmark teammates formed a wall around him to ensure privacy during a sequence that was anything but private.

It was the most-discussed event in the world on social media and sports networks for hours to come, and yet those Dannish players had to put on a brave face and protect those around them from witnessing something horrifying.

As Eriksen was carried off the pitch after what felt like hours of work by the medical professionals — which was in reality less than 20 minutes — photographs began to surface of the midfielder awake and holding his hand on his head.

Until the authenticity was confirmed by news outlets on location, it was a guessing game as to whether or not Eriksen was actually awake.

Then, Eriksen’s agent Maarten Schoots released a statement on a Dutch radio station regarding his client.

“I just spoke to Christian’s father, and he told me that he is breathing, and that he is able to speak,” Schoots said.

It was the assurance that everyone around the football world needed to hear in a moment where everything was on pause.

When players ultimately made the decision to come back onto the pitch less than two hours after the horrifying event, they were greeted with “Christian Eriksen” chants between the Dannish and Finnish supporters.

Humanity won on that day and it’s important to remember that there are more vital aspects of life than sports. As fans, we cheer and will go to the ends of the earth to support the teams that we love, but ultimately there wouldn’t be anything to cheer for without the men and women that make up the beautiful game.

The players. The coaches. The training and medical staff. The broadcasters. There were so many figures involved in this event that had to hold their wits together when most would crumble under the burden that was bestowed upon them.

This wasn’t about the result of the match — which Finland would win 1-0 — but instead the restoration of humanity and proving that people from different walks of life can unite in the face of adversity.