The WNBA playoffs start today, so let’s run it back to a pivotal moment in WNBA history: the first-ever in-game dunk. You might be asking yourself: Who Was the first woman to dunk in an official WNBA Game?

The year was 2002. The scene of the crime was the Staples Center. The culprit was Lisa Leslie, and the victims were the members of the now-defunct Miami Sol basketball team. To understand just how historic this moment was, we have to go back even further than 2002.

Women have been athletically gifted and dominant since the beginning of time; however, we didn’t start to see them get professional playing opportunities in sports until the 1980s and 1990s. That’s when the WNBA came. 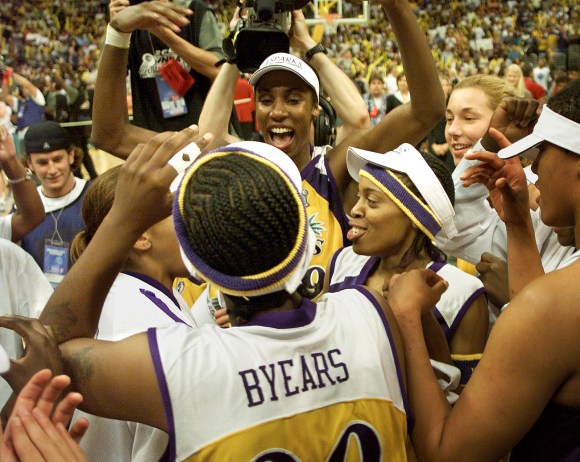 The WNBA was officially approved by the NBA Board of Governors in April 1996. Following a gold medal run at the 1996 Olympics, the WNBA launched its first season on June 21st, 1997. With nationally aired games on NBC, ESPN, and Lifetime Network, the new league began capturing people’s attention across the world.

The first couple of seasons featured campaigns around some of the league’s biggest stars, one of them by the name of Lisa Leslie.

By the year 2002, Leslie was one of the WNBA’s most popular players. Drafted by the Los Angeles Sparks in the league’s inaugural season, the rising star was fresh off a WNBA title the year before. In addition to the attention she was commanding on the court, Leslie had also gained a fan base from her modeling and acting career. When the Sparks center wasn’t balling on the court, you could find her modeling in publications like Vogue, and appearing as an actress in shows such as Sister Sister.

Now a household name in the WNBA, Leslie already had close to 3,000 points under her belt and a “SportsWoman of the Year” award from the Women’s Sports Foundation. While the WNBA had already experienced multiple milestones in the five years since its debut, the world had yet to see a WNBA player dunk on national television.

That all changed the night of July 30th, 2002, when Los Angeles Sparks forward Latasha Byears grabbed an offensive rebound in a matchup against the Miami Sol. By the time Byears secured the rebound, Leslie had already passed the halfway point of the court. Byears threw the ball quarterback style to Leslie (who pretty much caught it behind her back) and went up for the dunk (something she had only done in practice up to that point). The crowd went crazy, and the moment was so special that they stopped the game after the play to celebrate.

In the years after that legendary moment, Lisa Leslie went on to secure her place as not only one of the best WNBA players of all time but one of the best athletes of all time in general. The WNBA has continued to grow throughout the years, and with bubble (also known as wubble) playoff action tipping off today, we are sure to see many more magical moments.

The 16 Best NBA Winning Streaks of All-Time
PSA Qualifiers: 6 Things You Need To Know – copy
Who is the Highest Paid WNBA Player?