The second that the final whistle blows on any team’s season, whether that come during week 17 or the Super Bowl, coaches and executives immediately begin thinking about what comes next. Where can this team improve? Who should we draft? Many important questions linger, maybe none more so than who will be under center as the quarterback. Some teams like the Kansas City Chiefs don’t have that problem, but other teams must look at who the free-agent quarterbacks and if they are worth pursuing.

Several free-agent quarterbacks were on the market this past offseason, and some were scooped up relatively quickly. Players like Ryan Fitzpatrick and Andy Dalton were signed to be starters (although Dalton has since likely lost that job after the Bears drafted Justin Fields), while others such as Mitchell Trubisky will play the backup role.

Who were the biggest free-agent quarterback signings this year? Let’s take a look at the top 20 biggest moves from 2021. 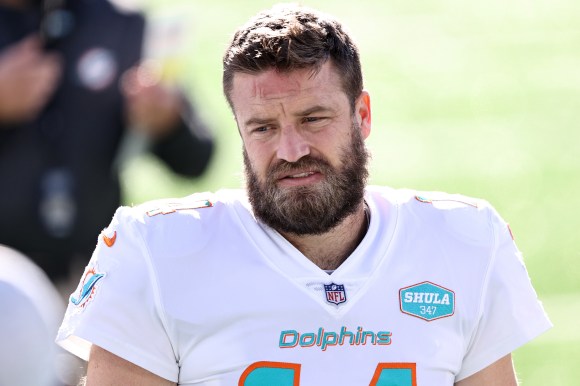 Perhaps the most well-known journeyman in NFL history, Ryan Fitzpatrick is entering his 17th season. And much like Omni-Man from Amazon’s Invincible, the man only seems to be getting better as he ages. After playing the past two seasons with the Miami Dolphins, Fitzpatrick signed a one-year contract with the Washington Football Team to likely be its new starting quarterback following the retirement of Alex Smith. 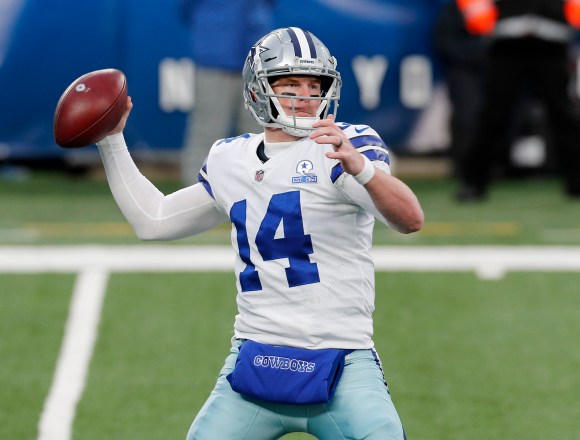 Signed with the Chicago Bears for $10 million, $6 million guaranteed

Andy Dalton, aka the Red Rocket or Red Rifle, spent most of his career as the franchise QB for the Cincinnati Bengals but spent last season with the Dallas Cowboys. He was forced into the starting role when Dak Prescott got injured and was having an okay season until he, too, was injured.

He was signed by the Chicago Bears this offseason in a move that people assumed would make him the starting QB. The Bears even confirmed this right after he was signed in a tweet that was promptly roasted when the team went on to draft Justin Fields. 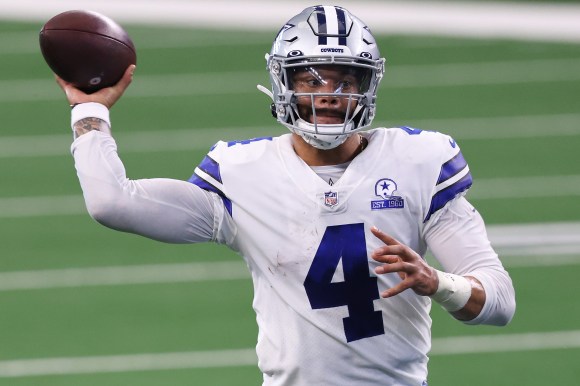 Signed extension with Dallas Cowboys for a four-year deal worth $160 million with $126 million guaranteed.

While technically not a free agent, there was a real possibility that Dak Prescott would not be suiting up as a Cowboy again, unless the two sides could reach an extension. Despite his brutal injury that took him out of the 2020 season, Prescott got his money when he signed an absolutely massive extension with the Cowboys, worth $160 million, complete with a $66 million signing bonus, the highest in NFL history. 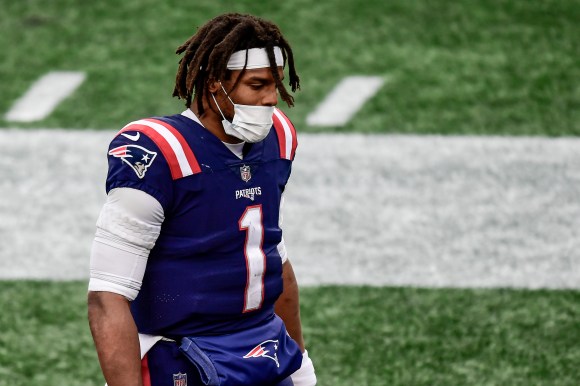 Re-signed with the New England Patriots for a one-year deal worth up to $13.6 million

The former NFL MVP had an up and down debut season with the Patriots, starting out hot but following a COVID-19 diagnosis in the middle of the year, quickly began to fade. He would see himself benched at points for backup QB Jarrett Stidham and many questioned whether the Patriots would bring him back for another year.

The Patriots ended up giving Newton another one-year deal and it will see Cam battling new draft pick Mac Jones for the starting job in 2021. 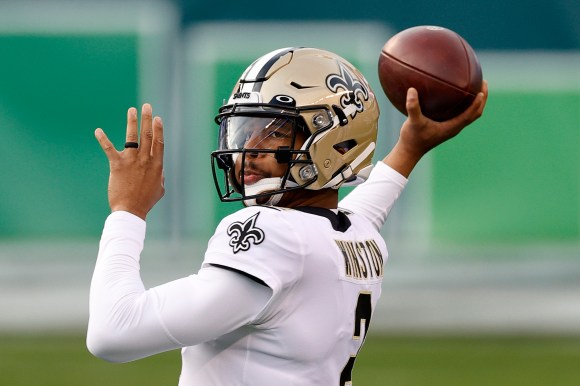 Ah yes, famous Jameis, the player who shows that he deserves to be a starting quarterback in the NFL, while at the same time puts on performances that would make Nate Peterman blush.

He spent this year as the backup to Drew Brees but was surprisingly skipped over for Taysom Hill when Brees got injured. He did see some playing time throughout the year but never started as the quarterback. On his best day, Winston is probably the best backup quarterback in the league and the Saints were smart to re-sign him. 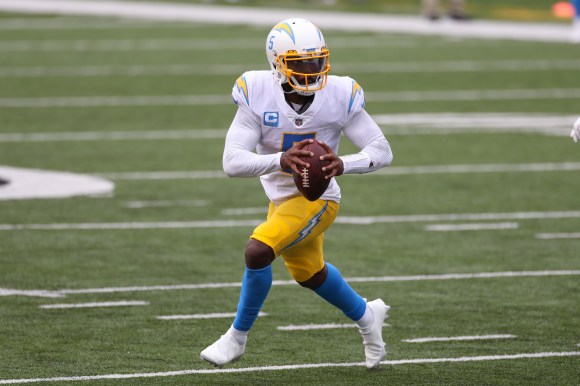 Signed with the Houston Texans for a one-year deal worth $5.5 million.

Taylor began last season as the Los Angeles Chargers starting quarterback but was injured during pre-game warmups before their week 3 contest against the Kansas City Chiefs. To make matters worse, his lung was accidentally punctured by a Chargers team doctor causing him to miss more time. Justin Herbert took over the starting job and went on to have an incredible rookie season and Taylor served as his backup.

Taylor went on to sign with the Houston Texans on a one-year deal, where he may serve as the team’s starter, given DeShaun Watson’s recent sexual assault allegations. 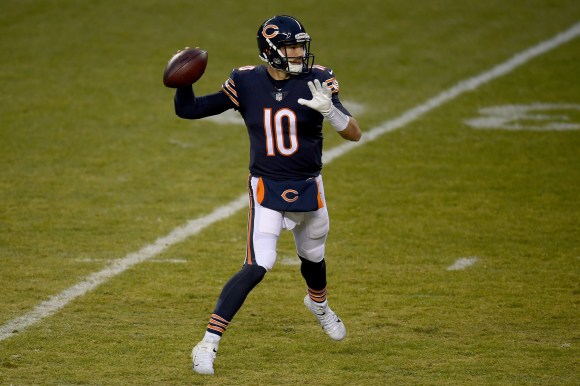 Signed with the Buffalo Bills on a one-year deal worth $2.5 million.

Mitchell Trubisky may always have the unfortunate luck of being “the guy the Bears passed up on Patrick Mahomes for.” Trubisky had an up and down career with the Bears but after leading the team to the playoffs last season it looked like Chicago was ready to move on.

The Bears elected to not pick up Trubisky’s fifth-year option and he signed with the Bills to backup Josh Allen in Buffalo. 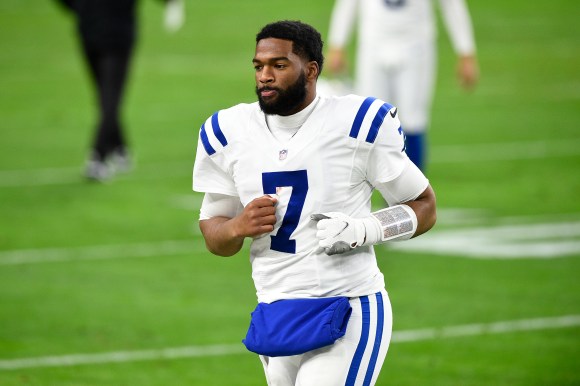 Signed with the Miami Dolphins on a one-year contract worth $5 million.

Originally serving as Tom Brady’s backup in New England, Brissett was then brought to Indianapolis to backup Andrew Luck. Following Luck’s abrupt retirement in 2019, Brissett stepped into the starting role where he put up a stat line of 2,942 passing yards, 18 passing touchdowns, and six interceptions to go along with 228 rushing yards and four rushing touchdowns across 15 games.

The Colts signed Philip Rivers in 2020 and Brissett served as his backup and following that season, he signed with Miami. 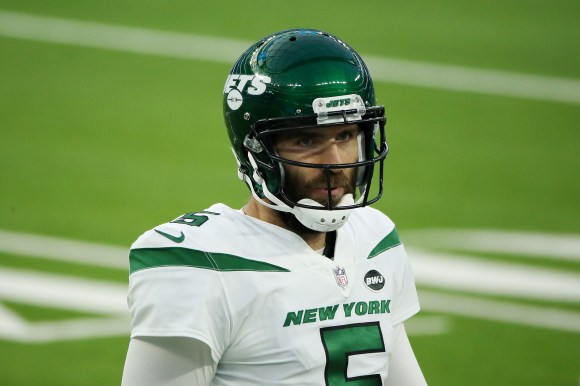 Signed a one-year, $3.5 million contract with the Philadelphia Eagles.

Is Joe Flacco elite? It’s a question that has plagues mankind for centuries and will be debated by scholars for centuries to come.

Serving as Sam Darnold’s backup in New York for 2020, Flacco was forced to step in as the starter for four games after Darnold injured his shoulder. In the games that he played, Flacco proved that he can still sling it, often looking better than Darnold in his games. At the end of the year, the Jets elected to not re-sign him and Flacco signed a contract with the Eagles. 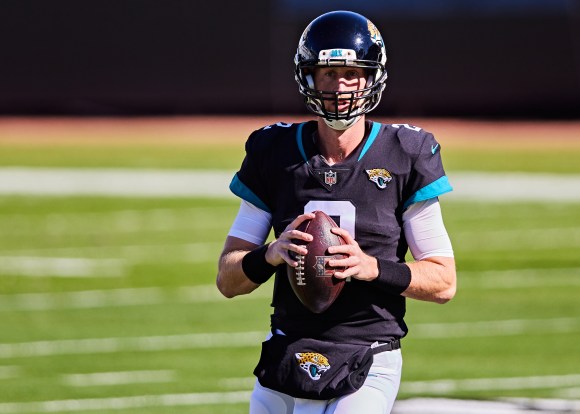 Signed with the New York Giants on a one-year deal worth $1.35 million.

Following an incredibly strange year in Jacksonville, which saw Glennon enter and exit the starting position multiple times, the quarterback found himself as a free agent.

The Giants, needing someone to back up starting QB Daniel Jones, found a prime target in Glennon, who signed the quarterback on a one-year deal. 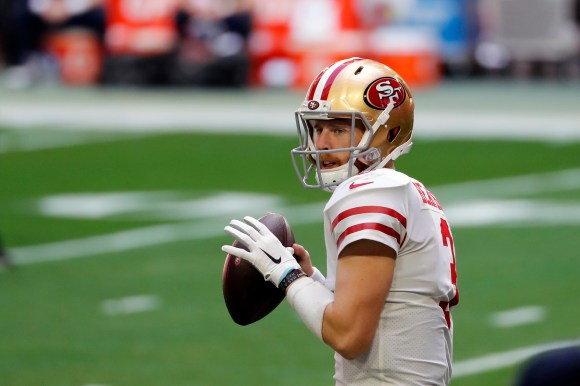 Signed with the Jaguars on a two-year, $5 million contract.

C.J. Beathard is a backup-level quarterback who spent the majority of last splitting reps with Nick Mullens after starting QB Jimmy Garoppolo was injured. Beathard was definitely a benefactor of Kyle Shanahan’s offensive scheme but is certainly a capable backup Quarterback. He signed with Jacksonville where he will serve as rookie Trevor Lawrence’s backup. 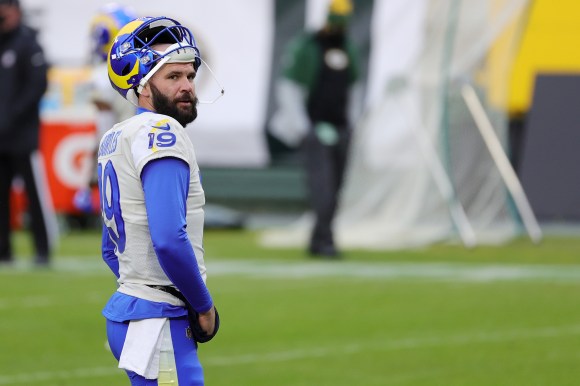 Signed a one-year contract with the Green Bay Packers for $1.1 million.

Once thought to be Jacksonville’s franchise quarterback, Bortles has bounced around the league since 2018, playing with the Los Angeles Rams twice and Denver, now landing in Green Bay. Along with Jordan Love, he will serve as Aaron Rodgers’s backup, that is, unless, Rodgers’s conflict with the front office forces him to another team. 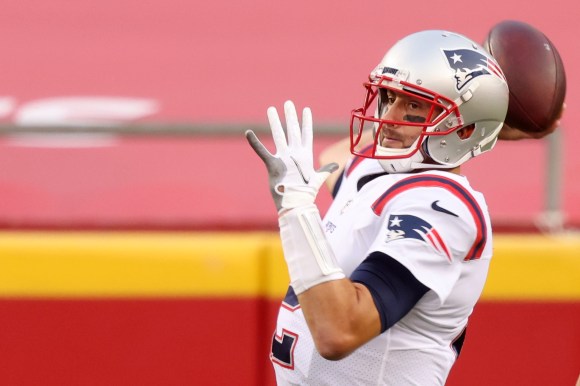 Re-signed with the Patriots on a one-year contract

The Patriots signed journeyman quarterback Brian Hoyer for a third time prior to the 2020 season, where he served as Cam Newton’s backup. When Newton was diagnosed with COVID-19 and sidelined, Hoyer stepped in as the starter but struggled immensely and was replaced by Jarret Stidham. 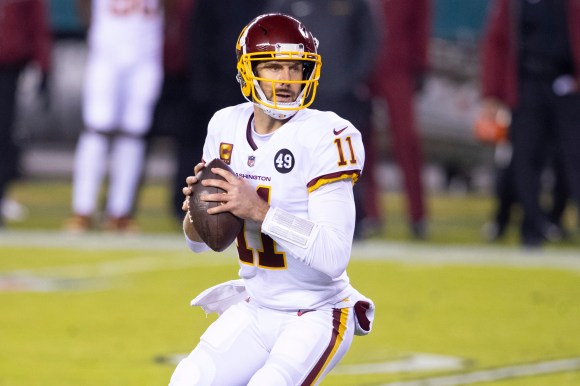 One of the all-time great NFL comeback stories, Alex Smith returned to the field in 2020 after a devastating injury in 2018 that nearly resulted in him getting his leg amputated.

He returned in 2020 and had an average season, playing in eight games, and following the end of the year, he was released by the Washington Football Team. A month later, and after a 15-year NFL career, Smith elected to retire. 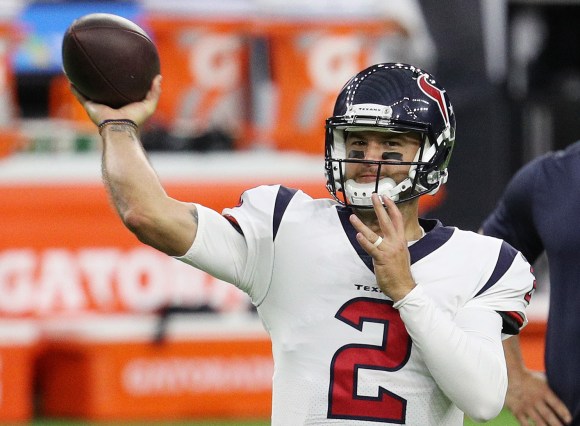 Signed with the Atlanta Falcons on a one-year deal worth $1.2 million.

Drafted in the fifth round of the 2014 NFL Draft, McCarron has spent much of his career as a backup and has not received much playing time. Last year with the Texans he entered the week 14 game when DeShaun Watson was briefly injured, but was sacked on his lone play.

He heads to Atlanta now to, presumably, back up Matt Ryan. 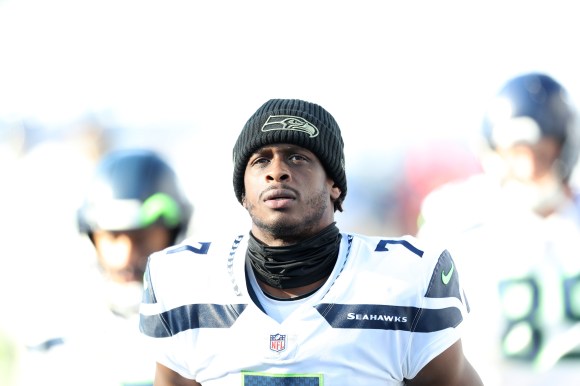 Re-signed with the Seattle Seahawks on a one-year deal worth $1.2 million.

Serving as Russell Wilson’s backup quarterback since 2019, the former second-round draft pick played in one game in 2020, replacing Wilson in a blowout victory over the team that drafted him, the New York Jets.

He re-signed with Seattle upon completion of the 2020 season. 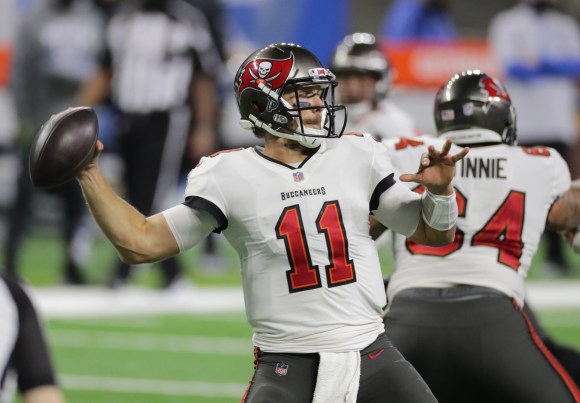 Re-signed with Tampa Bay on a one-year deal worth $1.5 million.

Another journeyman quarterback, Gabbert served as the backup to the GOAT himself, Tom Brady. Given the success that Tampa Bay had, Gabbert saw playing time in four different games and earning himself a second contract with the Buccaneers. 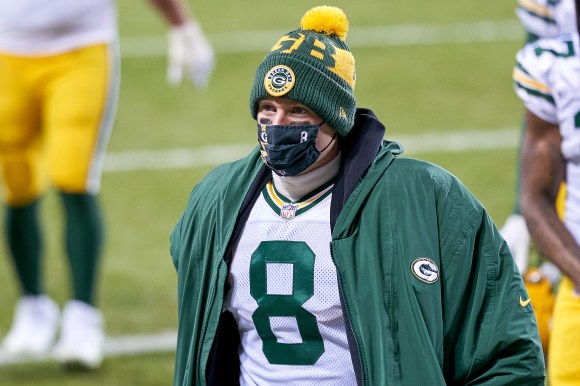 Signed with the Detroit Lions on a one-year deal worth $2.4 million.

Originally signing with Green Bay as an undrafted free agent in 2018, Boyle has served as the Packers’ third-string quarterback since then. He backed up Aaron Rodgers, DeShone Kizer, and Jordan Love during his time there, and was made an unrestricted free agent in March 2021.

He proceeded to sign a one-year deal with the Packers’ rival Detriot Lions. 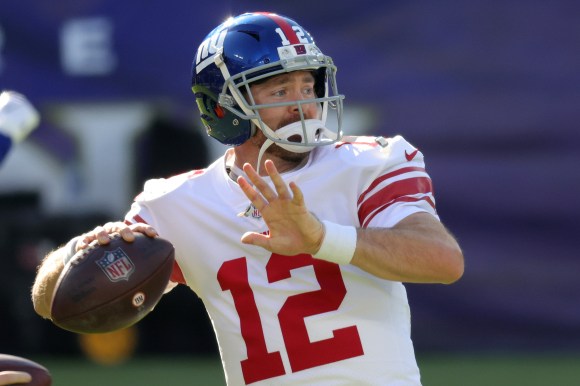 Signed with the Arizona Cardinals on a one-year deal worth $1.2 million.

Colt McCoy has bounced around the NFL since first entering the league in 2010. Since then he has earned a reputation as one of the league’s more reliable backup quarterbacks.

This offseason, he signed a contract to back up Kyler Murray with the Arizona Cardinals. 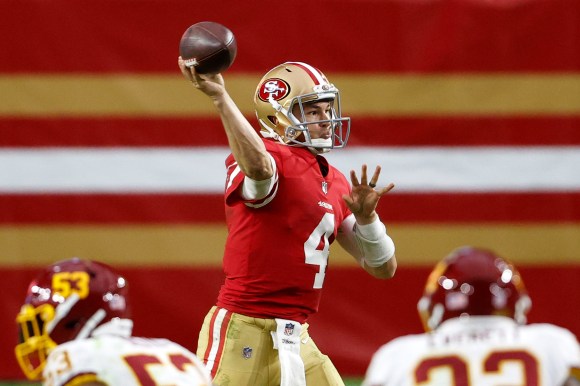 Along with C.J. Beathard, Nick Mullens served as the San Francisco 49ers’ quarterback for much of the 2020 season when Jimmy Garropolo was injured. He had an up and down year, finishing the season with 2,437 yards passing, 12 touchdowns, and 12 interceptions.

The 49ers elected not to re-sign him and he is currently a free agent.

NFL Legend Tim Brown Releases Official NFT Collection
Who Is The Best WR in the NFL? These 17 Players Are The Best In The Business
These Are The 16 Best NFL Jerseys, Ranked