Every offseason in the NFL, fans put their plans together for how they would spend their team’s available salary-cap space. Free agency is a great way to plug holes in a roster with veterans who have, for one reason or another, shaken loose from their old teams.

This year’s wide receiver class was not the strongest in recent years at the top, but it was deep. With most teams dealing with extremely limited finances and a reduced salary cap stemming from a loss in revenue due to the COVID-19 pandemic, there were a flurry of short term contracts given out by general managers who were seeking depth and value at the position.

The list below ranks the best available free agent wide receivers heading in to the offseason, where they landed, and their outlook for the upcoming 2021 season. 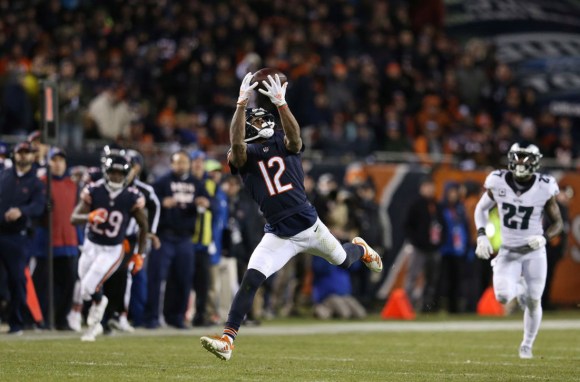 Allen Robinson has been an absolute star in the NFL, even though he has been paired up with some of the worst starting quarterbacks since entering the league.

Will the Bears drafting Justin Fields finally be exactly what Robinson has sorely needed to take the next step and get the respect he deserves? It should be fun to watch. He received the 5th best PFF ranking in the league in 2020 for all wide receivers (88.4) and almost never drops a pass. The Bears franchise tagged him, but they would be wise to lock him up long term sooner than later. 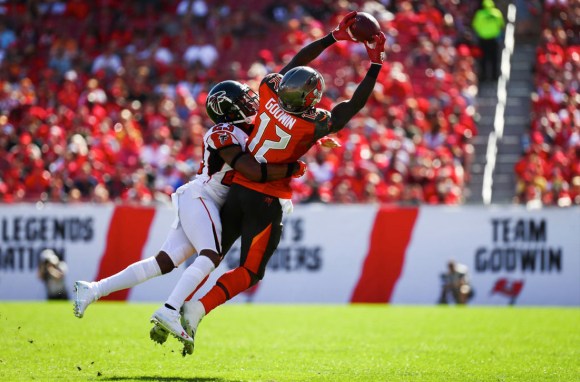 The Bucs franchise tagged him during the offseason, but much like Allen Robinson, they should look to give him the long term deal that he is looking for. 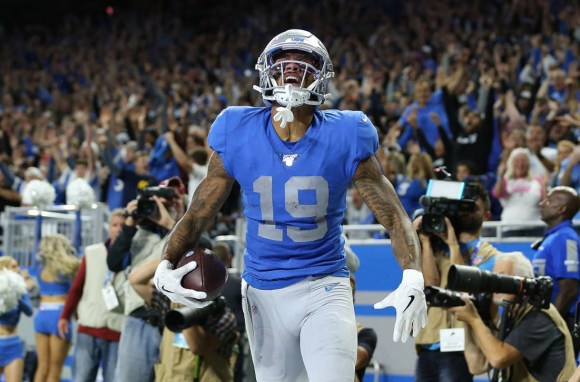 Kenny Golladay signed a massive four-year, $72 million dollar contract ($40 million guaranteed) with the New York Giants, joining a returning Saquon Barkley, Sterling Shepard and Evan Engram on what could be an explosive offense.

Golladay is known as one of the top deep threats in the game, ranking 4th in the NFL in deep receiving yards over the past three years. Giants young quarterback Daniel Jones throws a nice deep ball, so this signing should do wonders for his development. 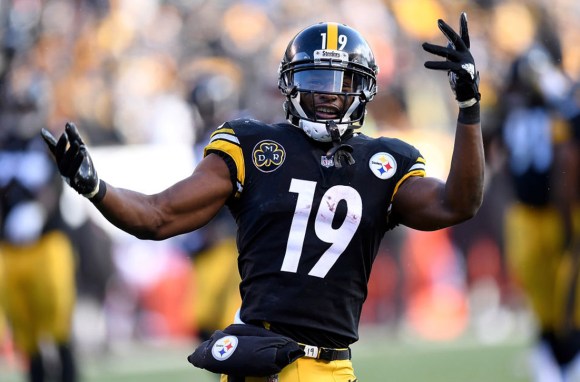 JuJu is a polarizing player who seems to have taken a bit of a step backwards during the last two seasons. In 2018, he caught 111 balls for 1426 yards and 7 touchdowns and appeared to be on track to become one of the best wide receivers in the entire league.  An injury shortened 2019 season in which he only played in 12 games resulted in a massive dip in production (42 catches, 552 yards) and was followed by a relatively subpar 2020 campaign (97 catches 831 yards) that was more memorable for TikTok antics than big catches.

With that said, he has all the tools and motivation to have a huge season in 2021, as the Steelers gave him just a one-year “prove-it” deal. Expect a renewed focus and big things from JuJu in 2021. 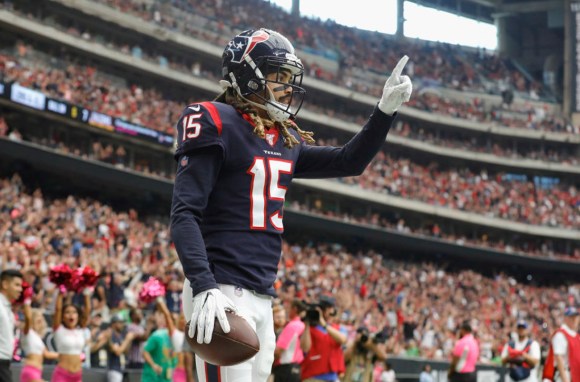 Fuller could not have possibly left the Houston Texans at a better time, with the Deshaun Watson mess taking center stage in his former city. He joins a Miami team on the rise, but he comes with quite a few question marks.

Last season was Fuller’s best as a professional, putting up a career high eight touchdowns in just 11 games before being suspended for six games due to testing positive for PED’s. That suspension will carry over through week 1 of the 2021 season. Were the PED’s partially responsible for the breakout season? Only time will tell.

Either way, Fuller is an emerging young wide receiver that should have a chance to flourish with the Dolphins young signal caller, Tua Tagovailoa. 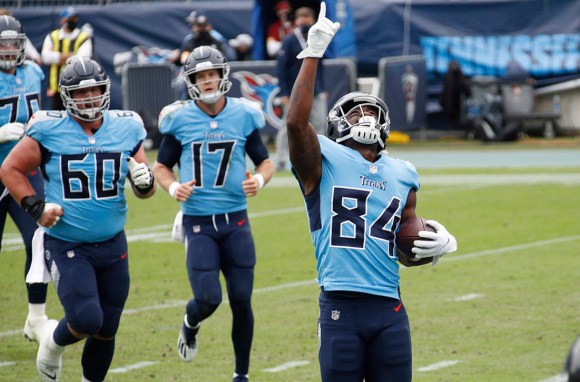 Corey Davis was selected 5th overall in the 2017 NFL Draft and never lived up to the pre-draft hype. However, in his final season in Tennessee, he had 65 catches for 984 yards and five touchdowns in what was his best season as a pro.

During the offseason, he signed a 3 year, $37.5 million dollar deal with the New York Jets and looks to become a star under the bright lights of Broadway with Gotham’s newest “savior” quarterback Zach Wilson, who they drafted second overall in the 2021 draft. 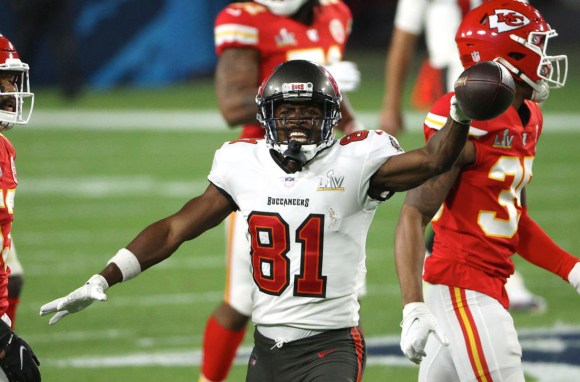 Brown resigned with the Bucs on a one-year $6.25 million dollar contract this offseason after a bizarre string of incidents that began with forcing his way out of Pittsburgh and being traded to the Raiders, forcing his way out of Las Vegas and signing with the Patriots–where he was released after just one game–and then signing with Tampa Bay, ultimately helping them win a Super Bowl.

His talent on the field is undeniable, but he comes with so much baggage. I wouldn’t be shocked if he has a big year in Tampa this season, and would also not be shocked if he gets himself in trouble again and winds up playing just a handful of games.

Brown is coming off of a procedure to repair a torn meniscus, so it’s not quite certain when he will get back on the field yet. 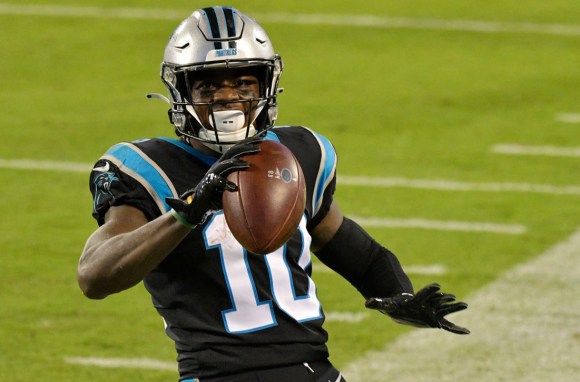 Samuel caught 77 passes for Carolina last year for 851 yards including three touchdowns in what was a bit of a breakout season. He also carried the ball 41 times for 200 yards and two touchdowns, illustrating how versatile his skill set is.

Newly signed quarterback Ryan Fitzpatrick will look to impart some “FitzMagic” in that Washington offense, and they could be one of the more improved teams in football. This will be a fun team to watch in 2021. 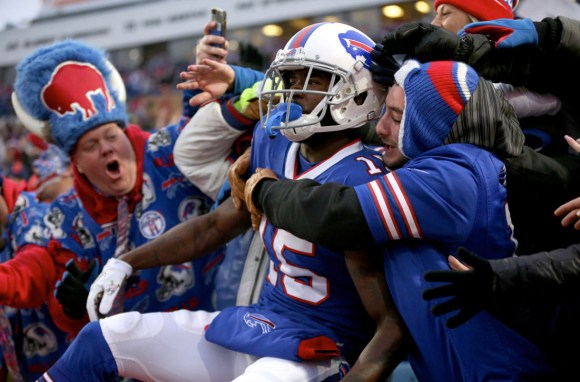 Brown signed a one-year $3.75 million dollar deal with the Las Vegas Raiders, his fourth team in five years, the last two of which he spent in Buffalo. Last season for the Bills, he played in just 9 games due to injury issues but in 2019 he had his best season as a pro, tallying 72 receptions for 1,060 yards.

In Las Vegas, Brown joins Henry Ruggs, Josh Jacobs and Darren Waller in what appears to have the makings of quite an explosive offense.

“The biggest factor was, I had to think about my career,” Brown said shortly after his signing. “I actually turned down more money to come here. I felt like it was the best decision for my career, so I had to put everything else aside and had to try to decide what would make me happy at the end of the day.” 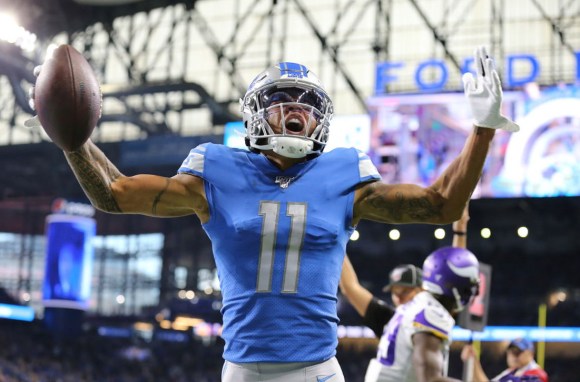 Jones Jr. signed on to play with the up-and-coming Jacksonville Jaguars who will be led by mega-prospect Trevor Lawrence and coached by Urban Meyer. He joins a loaded offense, boasting emerging wide receivers DJ Chark and Laviska Shenault, a running backs room including star rookie running back Travis Etienne and James Robinson, as well as the intrigue of newly signed tight end Tim Tebow.

How will all of those pieces fit together? It will be interesting to watch. Jones nearly topped 1000 yards in Detroit last season. If he can replicate those numbers in Jacksonville, they have a really good chance of surprising some people.

Best of the Rest:
11. TY Hilton – Signed by Indianapolis Colts 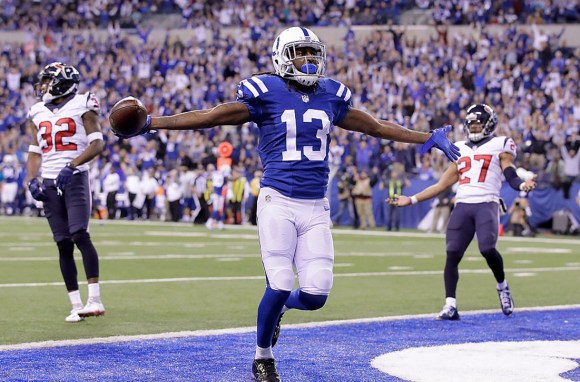 TY Hilton is a Hall of Famer. Many people will try and argue with that statement, but take a look at the man’s numbers! He has 608 catches for 9360 yards and 50 touchdowns in his nine year career. He signed a one-year, $10 million dollar deal to remain in Indianapolis this offseason, and will likely crack the list of top 50 most receiving yards of all-time at some point this season, passing A.J. Green, Demaryius Thomas and Wes Welker in the process. 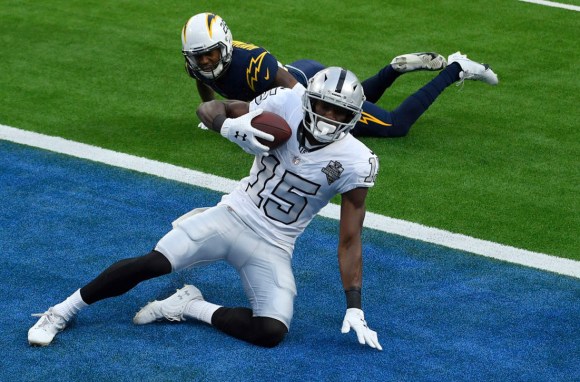 Agholor had a sneaky good season for the Raiders last year, totaling 48 catches for 896 yards and five touchdowns, boasting the highest yards-per-catch in the entire league. He is projected to be the Patriots number one receiver this season, which is not exactly a positive for New England. They could be an absolute mess this year, with an unsettled quarterback situation and a lack of talent at the skill positions. Bill Belichick has his work cut out for him. 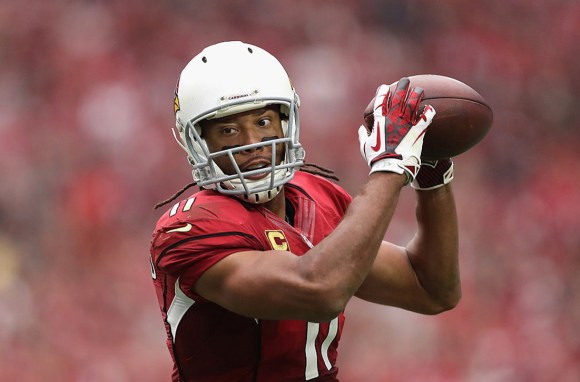 Larry Fitzgerald is a sure-fire Hall of Famer and one of the greatest to ever play the game. He remains unsigned, but there have been rumblings that he may consider playing his final season in his hometown of Minnesota for the Vikings. That would be bizarre, to say the least. It would be a shame if Fitz were to suit up for another team after 17 years in Arizona, but Tom Brady was the quarterback of the Bucs last season, so I suppose anything is possible. 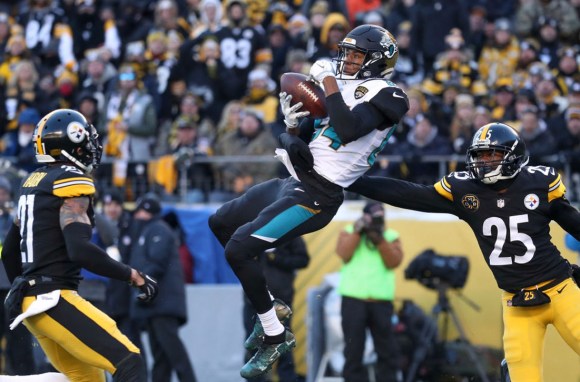 Keelan Cole sign a one-year $5.5 million dollar deal with the New York Jets, joining fellow free agent wide receiver Corey Davis to completely revamp a wide receiver room in dire need of some fresh talent. Known as a solid route runner and for his versatility, he will be a welcomed addition to Gang Green as they look to surround new quarterback Zach Wilson with some weapons. 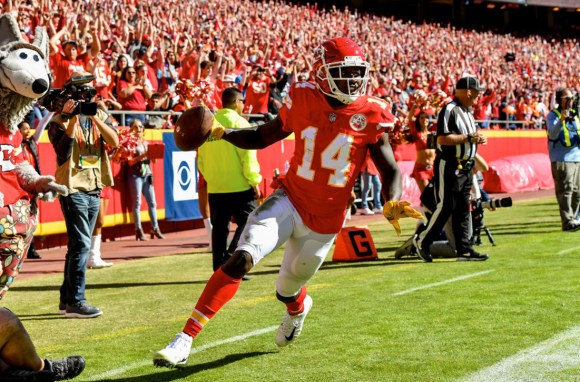 Watkins signed a one-year $5 million dollar deal with the Baltimore Ravens and will give another speedy weapon for former NFL MVP Lamar Jackson to utilize in what appears to be a scary offense that is headlined by another speedster in “Hollywood” Brown and young star running back J.K. Dobbins. Can he stay healthy though? Watkins has played in fewer than ten games in three of the last five seasons. 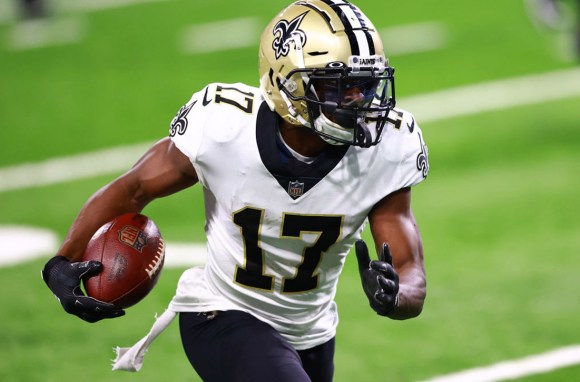 Sanders has been a part of some prolific offenses in his 11 year NFL career, including the Ben Roethlisberger led Steelers (2010-2013) and the record breaking Peyton Manning led Broncos, and now steps in to Buffalo to catch passes from emerging star quarterback Josh Allen after signing a one-year $2.8 million dollar contract. However, he won’t be asked to carry the load, as Buffalo has Stefon Diggs, Cole Beasley and Gabriel Davis already in the mix. You can never have too many weapons, and Sanders will be a veteran addition capable of making big plays in big games. 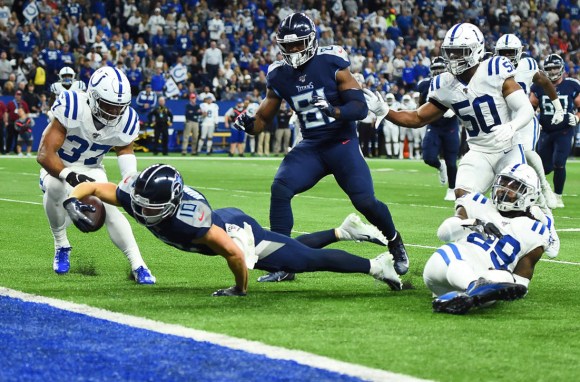 Humphries joins fellow wide receiver Curtis Samuel as another addition to the Washington offense, signing a one-year contract in March. The oft-injured former-Titan gets a fresh start with Ryan Fitzpatrick, who was his quarterback for two years in Tampa Bay, where he posted his best season as a pro (76 catches, 816 yards, 5 touchdowns). 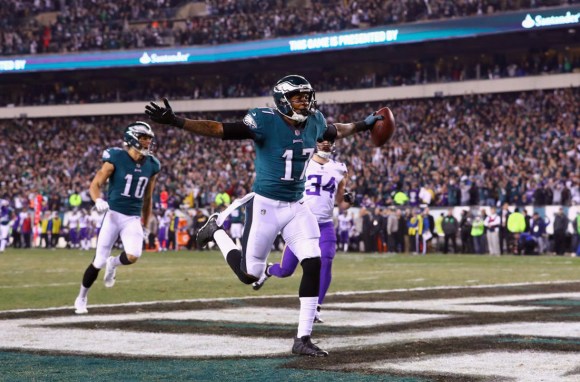 Jeffrey remains unsigned after four injury plagued and underwhelming seasons in Philadelphia. He played in only seven games last season for the Eagles, catching just six passes. With only 12 combined starts the last two seasons, Jeffrey will likely have to accept a one-year prove it deal just to get on a roster. 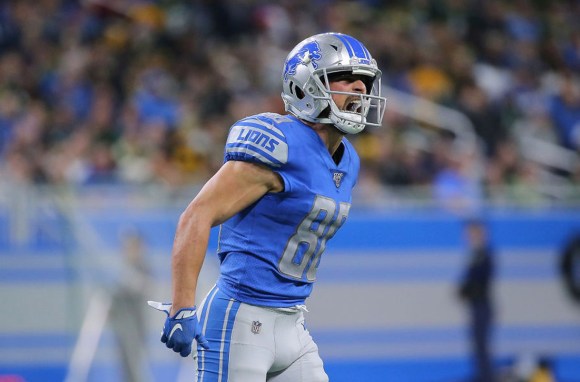 Amendola, like Jeffrey, remains unsigned and is fighting an uphill battle just to get on an NFL roster after catching just 46 passes for 602 yards last season for Detroit. The odds are high that we have likely seen the last of Amendola in the league, but with an expanded season and injuries, you never know. 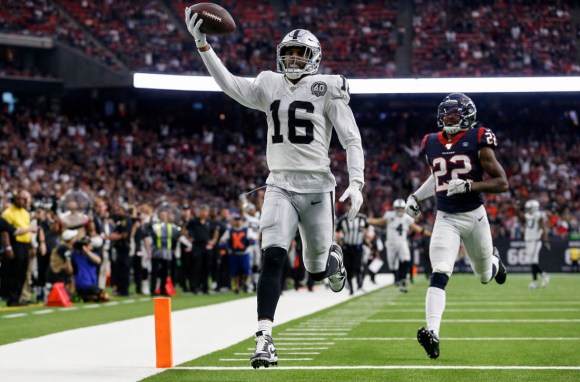 Williams signed a one-year $6.2 million dollar contract with the Detroit Lions, pairing with new quarterback Jared Goff after the Lions traded franchise signal caller Matthew Stafford to the Rams earlier this offseason. The former Raider missed the entire 2020 season due to a shoulder injury, but had a promising 2019 campaign in which he caught 42 passes for 651 yards and six touchdowns. He is somehow currently number one on the Lions depth chart at wide receiver, a group that also starts Breshad Perriman and Kalif Raymond, which is underwhelming to say the least. The Lions are going to be historically bad this season.