Ralf Ragnick has been widely-respected throughout the Bundesliga and Germany’s top divisions for decades, but now the former RB Leipzig and Schalke guru will take on a new challenge in the Premier League.

The 63-year-old former Head of Sport and Development at Lokomotiv Moscow will likely finalize a deal at Manchester United next week making him the interim manager at Old Trafford until May, when the club will decide his long-term fate.

In addition to his role as the club’s newest manager, Ragnick has agreed to stay on for two years as a club advisor even if he doesn’t continue as United’s head coach.

To really know Ragnick, it’s important to know his background and some of the managers that will forever be linked with the former holding midfielder.

Meanwhile, Southampton’s ​​Ralph Hasenhüttl, Leipzig’s Jesse Marsch and Bayern Munich’s Julian Nagelsmann are also disciples of Ragnick from their days spent together at Leipzig when he was the RB Global’s Director of Football.

The German began his coaching career in his native country back in the 1980s with local side Viktoria Backnang before moving on to Stuttgart as an academy coach.

After a series of stops at lower-level sides, Ragnick began to take on bigger roles in the Bundesliga with Stuttgart’s senior side followed by Hannover, Schalke, Hoffenheim and RB Leipzig.

Most recently, Ragnick has served at Lokomotiv Moscow as Head of Sport and Development, a position that he only took in July 2021.

Ragnick is best-known for his role at Red Bull Global as the director of football. He oversaw all things Red Bull for various clubs within their umbrella, including Leipzig, Salzburg and other Red Bull clubs around the world. 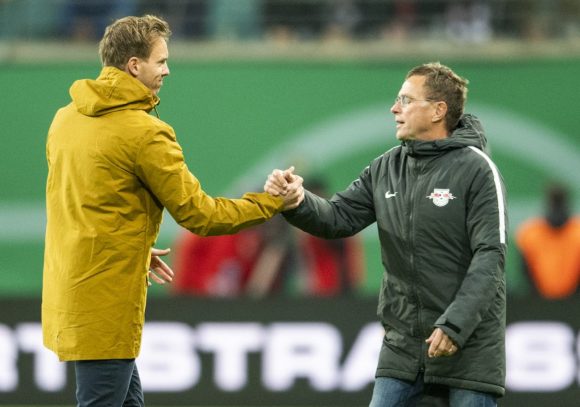 He brought the club from the fourth division in Germany all the way up to the Bundesliga, as well as playing a guiding role in helping Leipzig reach the UEFA Champions League for the first time in club history.

As a manager, Ragnick boasts a win percentage of 47 percent combined during his tenure at various clubs throughout Germany.

Ragnick is credited with the creation of “gegenpressing,” the constant pressuring of opponents after the attacking side loses possession through counterpressing.

The German has always been involved in high-tempo settings, and brought this style to RB Leipzig and Red Bull’s other clubs.

Back in 1998, Ragnick made a television appearance where he first laid out his ideals about football and how he wants his sides to play. Since then, he hasn’t strayed from the concept.

In fact, during his time at Leipzig, Ragnick would use a clock that was designed to apply pressure to his players. It would give his side eight seconds to win the ball back after losing possession and then another 10 seconds to get a shot on goal.

Everything about Ragnick’s system is about tempo and maximizing the quantity of chances his teams can get each match.

Ragnick certainly has his work cut out at Man United regardless of what his role is in the future.

The club is currently undergoing one of its roughest stretches since Sir Alex Ferguson left United over a decade ago, so Ragnick is tasked with not only restoring order but finding consistency as the club marches forward.

Ragnick historically prefers young players that fit his gegenpressing system, which will make United interesting to watch after signing Cristiano Ronaldo back from Juventus this summer.

United are currently one of the worst pressing sides in the Premier League, with a success rate of just over 28 percent.

For Ragnick to succeed in Manchester, he’ll need to get young players like Jadon Sancho, Mason Greenwood and Marcus Rashford to buy into his up-tempo system that relies heavily on strong work rate when his teams don’t have the ball.

With the January transfer window quickly approaching, United could be serious players in the market as they look to bolster their defense, which has conceded the third-most goals in the Premier League.

Meet Felix Afena-Gyan, Roma’s Newest Revelation
How Brentford Used ‘Moneyball’ to Return to the Premier League
The 25 Most Expensive Soccer Cards Ever Sold