The Professional Fighters League (PFL) is launching their NFTs so you might want to know a thing or two about some of their fighters fighting this year in their sports season format.

The Professional Fighters League (PFL) is about to close out its 2021 season in June. Then, the fighters with enough points to advance to the playoffs in the PFL’s season format of MMA will make it to the finals to be the 2021 champions. Being the PFL champ comes with a $1-million-dollar prize and an invite back for next year.

Recently, the PFL just announced the launch of their own NFTs. So, anyone interested in grabbing these collectibles will likely want to know about some of the fighters in the league. Here are 20 PFL fighters you should watch.

The former UFC welterweight contender and former Bellator MMA welterweight champion was one of the first big signees for the current season when the PFL closed out the 2019 season. COVID-19 delayed his debut but he picked up a first-round submission over Curtis Millender. 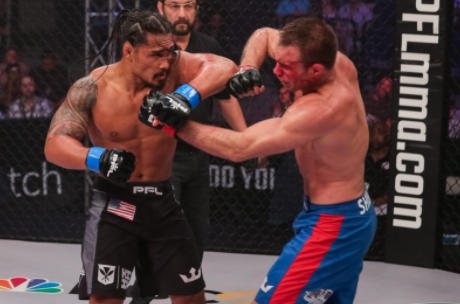 Cooper went from underdog when the PFL began to one of its top welterweights. He fought Jake Shields twice in 2018, avenging a loss his father had against Shields while cementing himself as one of the PFL’s top fighters. He is currently ranked number one, above MacDonald.

Loughnane fought his heart out on The Contender Series in 2019 and won a unanimous decision that many felt should have gotten him a UFC contract. It didn’t, but it certainly got him on the radar of anyone looking for new talent, so the PFL grabbed him up as soon as they could and got him into some fights. He secured his spot in the playoffs at PFL 4.

Jenkins is the man just behind Loughnane in the featherweight standings. After his first win this season, he said the final fight of the year would likely consist of him and Loughnane. The win he picked up was against the 2018-2019 champion, Lance Palmer.

Palmer has been grinding through the PFL since before they rebranded. Before that, they were known as the World Series of Fighting and he held the featherweight title then as well. While his first fight this season did not go his way, Palmer has shown in the past losing is not something he ever takes lightly.

Known by hardcore MMA fans as Cara de Sapato (Shoe-face), Carlos Júnior is another signee that came from the UFC where he picked up wins over Marvin Vettori, Tim Boetsch, and Eddie Gordon. Most of his wins come by way of submission and with the first-round submission he picked up this season, he’s definitely a light-heavyweight that should be on the fan’s radar.

Sordi was the 2019 PFL Champion and he used his $1-million-dollar prize money to help those in need in his home country of Argentina. Virtually unknown before then, when he got closer to the finals and won the season, he became a fan favorite at the PFL. He currently sits at number four in the PFL light-heavyweight standings. 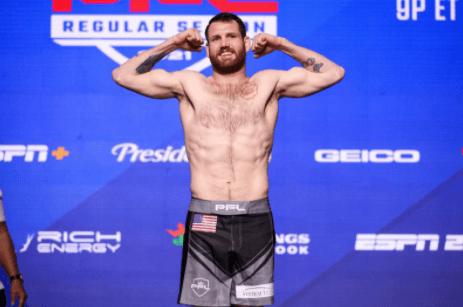 Collard was an MMA fighter, turned boxer, then returned to MMA when he signed with the PFL. His first fight was against Anthony Pettis where he was the underdog. The fight was tough, but Collard showed his time away in the sweet science of boxing helped make him a better mixed martial artist. He’s currently the number one lightweight in the 2021 lightweight standings.

Pettis has fought everywhere. WEC, the UFC, and now the PFL. He has held the lightweight titles in the last two promotions he fought in and has made it known he wants the PFL gold for 2021. His first fight did not go as planned but that does not mean he’s out yet. Keep an eye on Pettis.

Wade recently picked up one of the most spectacular knockouts of his career at PFL 4 this season. The New Yorker is a favorite in the northeast region and his PFL and UFC fights are fun to watch. The win he picked up in Atlantic City will keep him atop the current featherweight standings, putting him on track to challenge for the title if he keeps the momentum going in the playoffs. 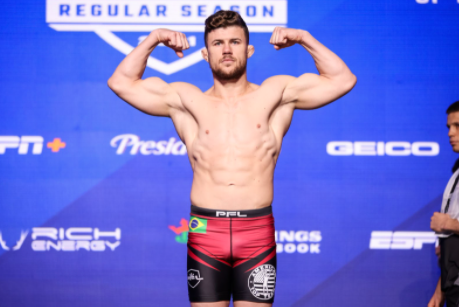 Schulte is a two-time PFL lightweight champion that has always found a way to get to the main event on New Year’s Eve. While he lost to  Marcin Held this season, like Pettis, he still has a chance to get back in the mix if he picks up a win while the season is still going. He’s lost one before and came back to win the prize, so it can certainly be done again.

Fabian’s record seems green for MMA given the small numbers but so was Harrison’s when she began and became champion. In the 2019 season, she was supposed to face Harrison and had to pull out due to illness. That’s a fight that could still be in the future depending on how things go.

Shields is new to MMA but 11-0 as a professional boxer. She is the only boxer to ever hold all four major boxing titles (WBA, WBC, IBF, and WBO). She really has nothing left to prove in the world of boxing and, at 26-years old, is looking to have the same success in MMA. The PFL is a good place to start, and since fellow Olympian and 2019 champion Kayla Harrison started the same way, the move makes complete sense. She won her debut against Brittney Elkin at PFL 4.

Cappelozza made a statement in his first PFL fight by scoring a first-round knockout in his debut over Ante Dilija in a fight where he was the underdog. The quick finish shot him to the top of the 2021 heavyweight standings making him the man to beat thus far in the PFL.

There’s something about mullets and MMA that make for some scrappy fights and probably a pretty cool NFT. The young featherweight is definitely someone that brings the fight to all of his opponents. Even though he lost he fought one of the best fights of the season against Loughnane at PFL 4.

Aubin-Mercier made his PFL debut against Held on June 10 at PFL 4. The former UFC fighter holds wins over Drew Dober and Anthony Rocco Martin. What he brings to the PFL seems to be the same traction of success he had when he was in the UFC. He fights out of Tristar Gym, the same gym that brought fans Georges St-Pierre.

If any woman in the PFL women’s lightweight division knows Harrison, it’s Pacheco. Her two losses come from Harrison, which means she beat everyone else to get to her. She seems to be gunning for a rematch this season since she picked up a first-round finish, and sits at number one in the women’s lightweight standings.

Young beat a very tough Cindy Dandois in her PFL debut. She’s built most of her MMA record fighting in Invicta FC, the all-women’s MMA promotion where she fought for a vacant title not too long ago. She currently has enough points to repeat the same opportunity in the PFL if she picks up some more wins.

Goltsov accumulated most of his wins in his native Russia before coming to the PFL. The average MMA fan might not have known much about him before then, but since he has come close to winning before, and currently looks to get closer to the million-dollar grand prize in 2021. Of his 26 wins, 10 are by submission with 11 knockouts.

Anthony Pettis on His PFL Debut, Stupid Spending, and Boxing
Everything You Need To Know About Professional Fighters League
ONE Championship vs. UFC: How the Two MMA Organizations Stack Up