Ahead of their Week 9 game against the New York Jets, The 3-5 Indianapolis Colts are not only approaching a crossroad with the fate of their season, but with their $128 million dollar quarterback, Carson Wentz.

The Colts traded two draft picks to the Philadelphia Eagles for the quarterback back in February. Wentz was coming off of his worst season in the NFL, throwing only 16 touchdowns while committing 21 turnovers and having an abysmal 57% completion percentage. 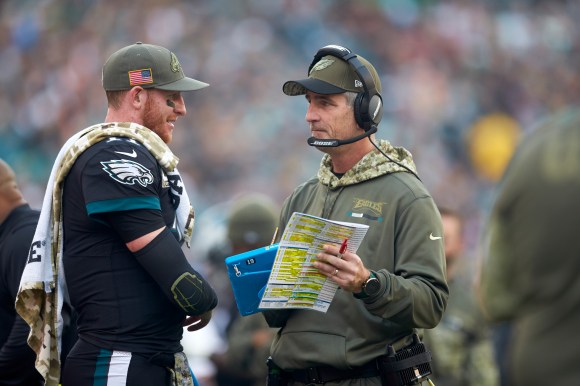 At the time of the trade, the sentiment around the Colts organization was that they’d be able to fix Carson Wentz â€” Colts head coach Frank Reich was held in high acclaim for coaching Wentz to a 2017 All-Pro season as the Eagles offensive coordinator.

Through seven games under Frank Reich this year, Wentz has only turned the ball over three times, while scoring 12 total touchdowns and completing 64% of his passes.

Although those numbers are hardly gaudy, the team has won three of their last four games and Wentz has been taking care of the football, seemingly taking the team in the right direction.

Then came the two-yard, left-handed, Hail-Wentz against the Tennessee Titans last week.

As bad as that interception was, the next one that he threw might’ve been even worse. On first down, Wentz unnecessarily threw into triple coverage, ignoring a wide-open Jonathan Taylor, the reigning AFC Player of the Month, in the process.

While Wentz deserves a majority of the blame for the turnovers, head coach Frank Reich has also made numerous questionable decisions. Notably, he had Wentz drop back 50 times, including on their own 2 yard-line, even though they were averaging four yards a carry with Jonathan Taylor throughout the game.

Nonetheless, this performance could be pinned as a vintage Carson Wentz debacle and as a reminder that Wentz still believes he’s superman â€” someone that can make any given play on the football field from the quarterback position. It’s a mindset that can work, when adopted carefully and strategically, but one that can be disastrous if not.

Additionally, we learned something rather interesting from his poor decision making last Sunday. It’s now obvious that Reich didn’t make Wentz into some special player in 2017; rather, Reich and Wentz were fortunate to succeed despite Wentz exhibiting many of the same bad habits that have been so costly during the last two years. Even on some his best plays in 2017, in which he threw for 3,500 yards and 33 touchdowns, there were those that could’ve went the wrong way.

Whether it be the playmakers around him at the time, higher levels of confidence due to job security, or just sheer luck, Wentz got away with holding onto the ball too long and forcing plays more often than not.

Granted, Wentz’ supreme talent is indeed what almost won him the MVP, and he has what it takes to lead the Indianapolis Colts to the places they want to go now as well. So far this season, he’s accounted for 15 total touchdowns and only six turnovers while amassing a 96.7 Quarterback Rating.

With it apparent that even Frank Reich cannot keep Carson Wentz from making boneheaded decisions though, the Colts now have to ask themselves if they’re all-in for what they signed up for. They have a quarterback capable of throwing for over 30 touchdowns and 3500 yards, like he did in 2017, but also a quarterback that can turn the ball over 20+ plus times like he did last year and potentially lose you football games like he did last week.

Is the Carson Wentz reward worth the very risk he presents? Time will tell.

Ranking The Ten Best Teams In The NFL Right Now
How Will The Titans Survive Without Derrick Henry?
What Could Happen at NFLâ€™s Trade Deadline?