Ariel Atkins is a young fearless talent who has been given the unique gift of basketball, and a powerful platform to change the world. Through the years we’ve seen her blossom not just as an athlete (Atkins is currently having a career year that is generating All Star Buzz), but we’ve seen her become an activist, and a prominent part of the community, which is something she feels is one of her most valuable contributions. On the court, the Washington Mystics star is a vicious competitor determined to do anything on both ends of the floor to help her team get a win, but off the court she is a fun, family oriented, nature loving girl, who wants to use her opportunities to open doors for others. 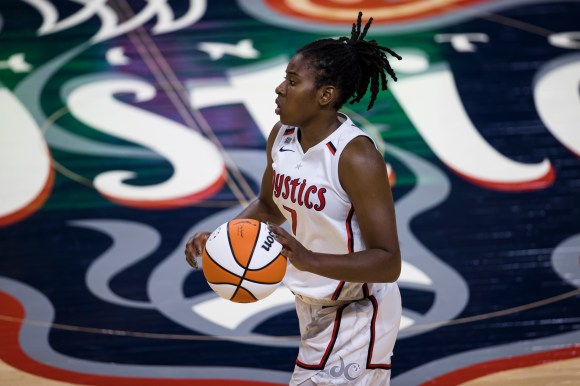 Atkins’ growth has been a pleasure to watch, as she continues to ascend to superstar heights. While still early in the season, a quick look at her stats will show you her dominance thus far. Just a little over ten games in, Atkins is averaging nearly 18 ppg (up four percent from last year), and her assists, blocks, and rebound percentages have gone up as well. Most importantly, Atkins leadership has become undeniable, accompanied by a commanding presence and confidence on the court. We got the opportunity to catch up with Atkins while she was on the road to talk about the Mystics start to the season, her goals for the future, and who she is outside of the court.

ONE37pm: Okay so we’re a few weeks into the season, and you guys are starting to find a groove and a rhythm. I wanted to ask you about your preparation process because this year was still different than normal.

Atkins: Yes because we had players who went overseas, and players that took the year off. So it was definitely tough for us to find our timing and get back into the groove. We have a new team, so it was a case of everybody trying to get their timing back, and figuring out what everyone likes to do. It was definitely tough, but it has been good for us because it forced us to figure out things very quickly.

ONE37pm: Let’s take it back to last year. We’ll probably never see a season like that again just because of everything that was going on. We saw how progressive the W was, and you used your voice. How important was that for you?

Atkins: I think that is just the nature of this league. The W is made up of 80 percent Black women, and that is the nature of us—we just step up. To have allies of different ethnicities that we had was really rewarding, but it made you realize that this was a much bigger issue. Just because we were in a bubble and didn’t get to experience the outside world, didn’t mean we didn’t wake up each day and feel the same effects of what was happening on the outside. It was definitely an interesting experience to feel disconnected and so connected at the same time. It was a strange feeling, but we knew coming into the season what our focal point was, which was the “Say Her Name” campaign in honor of Breonna Taylor and her family, and different things we could do to help not only empower our community, but spread their stories.

We had the opportunity to be one of the most watched sports during the pandemic, and I’m thankful to our league for finding a way to put it together. It gave us the opportunity to get a bigger platform, and use that opportunity the best way that we could. There are a lot of WNBA players who speak out about a lot of things, and there was the chance for me to speak. We had already talked about a bunch of different things ahead of time, and the opportunity presented itself to speak up on something that we really believed in. I’m thankful to ESPN for giving us that chance, to speak and say what we felt.

ONE37pm: We’ll bring you back to the present. Each year you get better, so what is your strategy to improve every season?

Atkins: Just to get a little bit better! That’s all I can ask for. Basketball is a game where you can always add to your game. If you can’t shoot, you can learn how to. If you can’t dribble that well, you can learn. You can learn how to become a better passer and communicator. There are tons of things you can do to become a better player, and that is something that I love. For me it’s always about helping my team and organization win championships, and what I can add to my game to throw other people off. It’s really a matter of getting into the gym and figuring out how to get better. Right now my goal is to get to the rack more. That is definitely my focal point this year.

ONE37pm: How many championships do you want to win?

Atkins: I would love to win one every single year! I know that isn’t possible but that is my goal every season. I won’t put a number on it, but as many as I can!

ONE37pm: It’s important for us to see athletes in a human light. What do you like outside of basketball?

Atkins: I’m a big nature person! I love going outside and listening to water. That’s my thing! Also hanging out with my family whenever I get a chance. Those are my two biggest things that I like that are my calm factors. I’m really big on my faith too, and anytime I can sit down, be quiet, try to talk to God, and pray, is another calming factor for me. I’m really big on that because I have to make sure I’m good inside before I ever try to do anything.

ONE37pm: Where do you see yourself in the next five or ten years?

Atkins: Hopefully I’ve got some more rings on my hand, and I would like to figure out ways to help my community. I don’t have a foundation in place, but I would like to work with different foundations in my hometown Dallas, and the DC area to figure out how I can use the resources and people that I know to help those communities. It’s something that I am working on now, and I would like to see things in action over the next five to ten years to where foundations can come to either myself or somebody in my circle to get the resources and access that they need.

ONE37pm: You guys are great, but I feel that those of us in the media and general public could do an even better job supporting you all. What do we need to do on our end to continue to help grow the league because the ultimate goal is expansion!

Atkins: Expansion! Say that again! I would say make it visible. Show people! I think that is the biggest thing because the cliche term “Out of sight, Out of mind” is true. If nobody sees the league, and kids/families don’t know what it is, then they aren’t watching. The W has done a good job at making the league visible by linking with Twitter, Google, and things like that. Also just talk about the W! If you are going to a game, ask your friend if they want to come. Small things like that.

Atkins: That is a heavy question! Who is Ariel Atkins? She’s a good human that just wants to spread love and joy into the world. I love what I do, I’m thankful to do what I love, but I also know that’s not who I am. The biggest parts of me are making sure I’m being a good human, and that I leave the people who cross my paths better than I found them.

One thing is clear, Ariel has a bright future ahead of her with plenty more accomplishments in store. You can continue to keep up with her on Instagram.