Injuries. Undoubtedly, the worst thing that can happen to an athlete. The effects of which can be directly felt by the team, and likewise, the hardcore fans who are giddy to don their favorite player or team’s jersey, and root for them on game day. Although we talk a lot about fantasy in this weekly column, injuries are a sad reality of sport. It robs the player, the team, the fans, and the sport, of what could have been.

When the NFL’s brightest stars such as Christian McCaffrey, Saquon Barkley, Nick Bosa, and Courtland Sutton (to name a few) go down with injuries, some of which are season ending, it is a gut punch to everyone connected to football. We know it’s not fun to talk about, but we would be remiss if we didn’t mention the most unfortunate and glaring theme of week two. We wish everyone who suffered an injury a full and speedy recovery, and we can’t wait to see you back on the field!

With that being said, it wasn’t all bad news this week! We had one of the most entertaining games of the young season between the Atlanta Falcons and Dallas Cowboys, which saw Dallas come from behind to win, as Atlanta’s special teams unit botched their onside kick coverage, allowing Dallas to recover the ball. We also witnessed an overtime nail biter that featured Kansas City Chiefs’ kicker Harrison Butker, effortlessly convert back-to-back-to-back 50+ yard field goals, to finally sealing the deal on his third try.

And who could forget the most impressive individual performance of Sunday? Green Bay Packers’ running back Aaron Jones went off for 236 all-purpose yards and three touchdowns, eviscerating his division foe Detroit Lions. Yes, week two certainly had its ups and downs, but nevertheless, we still have work to do! Maybe we can find some solid replacements for someone you lost to an injury last week.

BONUS: Hang around until the end for a quick recap of our week two picks! 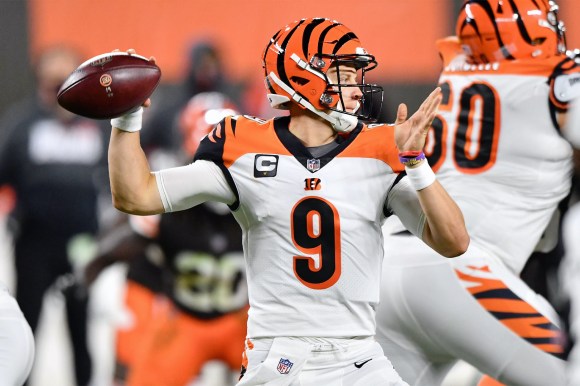 Usually, we wouldn’t bother writing up a current number one overall draft pick due to the implied talent, but Joe Burrow is an exception to the rule. Although he’s a rookie, he looked to be nothing short of a bonafide star in week two. He might’ve come up short versus the Browns on Thursday night, but Burrow attempted a staggering 61 pass attempts for over 300 yards and 3 TDs, while tacking on seven carries for 19 yards.

To me, this signals that Joe Burrow is, in fact, the Tiger King. The Bengals’ coaching staff is showing a tremendous amount of trust in their young signal caller, something you love to see from a fantasy perspective. While I don’t expect 60+ passing attempts to be the norm, he’s getting the kind of volume that can lead to many more monster performances this year, especially if the Bengals continue to play from behind.

DFS: (DraftKings: $6,200, FanDuel: $7,400) @ Eagles Week three sees Burrow facing a desperate Philadelphia Eagles team who is looking for their first win. The Eagles allowed Jared Goff an efficient 23.98 fantasy points this past week, so Burrow is in play given the volume we’ve seen him have in his first two games. With an implied game total of 46, and the Eagles opening as -6.5 favorites, this should be a favorable game script for Burrow to put up another solid stat line. Consider him a tournament play this week.

Fantasy Ownership: We mentioned earlier that we normally wouldn’t take the time writing up a first overall draft pick, because he’s supposed to be good, right? Typically, it takes a year or two for QBs to pan out in the pros, but Burrow has already shown the mettle of a veteran just two games into his rookie year. Not only is Burrow talented, but he’s also widely available in most fantasy leagues. That’s right, the top pick from this year’s draft is only 45% owned at the time of this article being written. If you’re looking for a little insurance at the QB position, or if you’re in a league where you can start two QBs, Joe Burrow is the cat that you want. 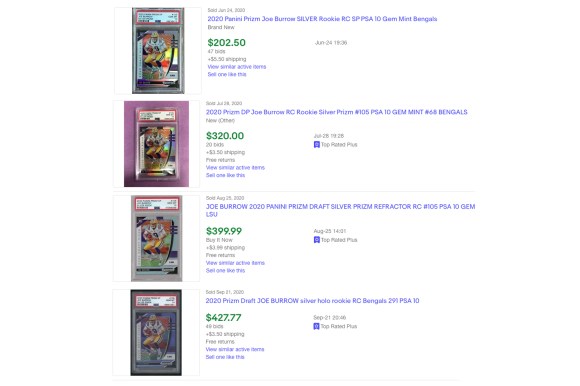 Card Market Rating: Buy. Burrow’s PSA 10 Silver Prizm rookie cards have more than doubled since June but have remained relatively flat for the past month. If Burrow continues to play well and can translate his impressive stat lines into wins, and eventually into a Rookie of the Year award, I expect his cards to continue on an upward trajectory. 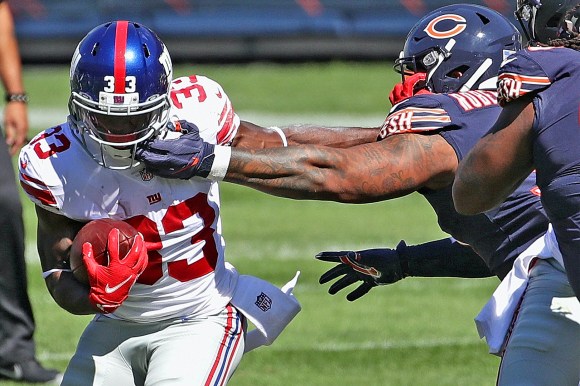 As we touched on briefly above, the Giants, (and football fans everywhere), suffered a huge blow with the news of Saquon Barkley going down for the season with a torn ACL. Enter Dion Lewis. Known mostly for his productive years with the New England Patriots as Tom Brady’s preferred passing option out of the backfield, Lewis suddenly finds himself as the next man up in the Giants’ running back stable. Sure, Wayne Gallman (1% owned) is still around, but for us, Dion Lewis is the guy to roster. Why? Well, the Giants’ defense has been abysmal this year, which means they’ll likely be playing from behind and passing more often than not. Lewis has proven capable as a featured back in the right situation, while Gallman wasn’t even active for New York in week two.

Keep your eye on former Falcons’ RB Devonta Freeman (7.5% owned) as well. Freeman has been making the rounds in free agency looking for a team to sign with. The Eagles and Giants are expected to have Freeman in for a visit this week, so he is someone worth monitoring, as he has proven to be a stud in the past, despite his struggles in more recent years. If the Giants ink Freeman to a deal, he would vault himself ahead of both Lewis and Gallman on the depth chart.

DFS: (DraftKings: $5,300, FanDuel: $5,500) vs. 49ers Although Lewis is projected to be the top RB for the Gaints for now, is he daily fantasy relevant this week? The answer is maybe. The 49ers have recently lost three quality guys from their defense, which softens the matchup for Lewis this week. The implied game total is 40.5 with the Niners still favored by 4, so for now, this is probably nothing more than a dart throw play in tournaments. He could be a way to save some salary if you want to gamble this weekend.

Fantasy Ownership: Lewis is about 1% owned in fantasy leagues, which isn’t much of a surprise. When you invest a high draft pick on a guy like Barkley, you tend to take for granted his health and availability. It seems as if most Barkley owners didn’t take Lewis as a late round handcuff this year, making him available in virtually all fantasy leagues. If you think more highly of Gallman, he’s available everywhere as well. I expect a committee approach going forward. 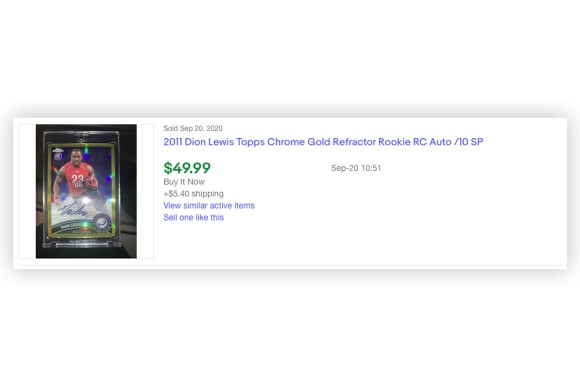 Card Market Rating:  Sell. There is not much activity on the Dion Lewis card market. If you are a collector or a Giants fan who wants to buy some of his rookie cards just to have, they are extremely cheap and you can probably have some fun with it. The most expensive Dion Lewis card that sold on ebay in the last 3 months was a Topps Chrome gold refractor rookie auto /10. However, Lewis is in his 9th year in the league, and is only playing significant time because of injury. Do not buy his cards as an investment. 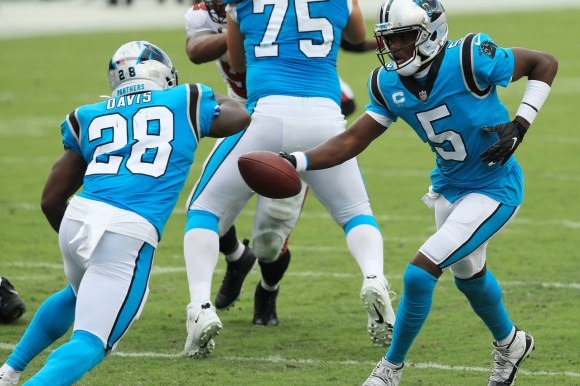 Opportunity knocks, as another franchise RB will miss significant time this season. Christian McCaffrey’s initial timetable for return is 4-6 weeks with an ankle injury, meaning veteran RB Mike Davis will step into the starting role for the Panthers. While Davis may not be a household name, he does have some big-time games under his belt. We have to go all the way back to 2018 to find the last time he was relevant, but Sunday showed that he still has some gas left in the tank. With CMC out, Davis hauled in all eight of his targets for 74 yards in garbage time versus the Bucs. In Davis, we might have a potential three-down back on our hands for at least the next several weeks.

DFS: (DraftKings: $5,100, FanDuel: $6,000) @ Chargers  Add Mike Davis to the list of potential salary savers in your DFS lineups this week. With no other noteworthy RBs behind him, Davis has a direct path to more carries and more receptions versus the Chargers this week. Do we love the matchup? Not one bit. What we do love is the potential upside as a pass catcher for Teddy Bridgewater to check down to if Carolina finds themselves trailing like last week. The implied total is 43.5 and the Chargers are a -7 favorite, so we can consider Davis as a value play for tournaments only.

Fantasy Ownership: As you might expect, Mike Davis is almost completely unowned in fantasy leagues right now. Head coach Matt Rhule expressed confidence in Davis after Sunday’s game, which should leave league managers feeling confident in adding him to their rosters this week. If you find yourself at the top of the waiver wire order, consider Davis as the top running back available. He should be found in over 90% of fantasy leagues and makes for a solid RB3/FLEX play while CMC is out. 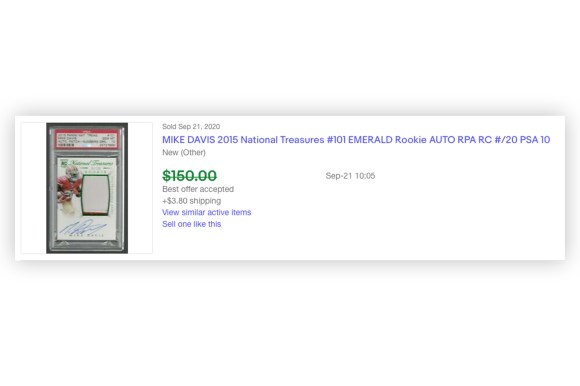 Card Market Rating: Sell. As is this case with Dion Lewis, Mike Davis’ cards had very little movement prior to McCaffrey’s injury on Sunday. Here again, sales began to pick up once news broke that CMC would miss time. If you’ve been holding on to your Mike Davis cards, it may be time to strike while the iron is hot. I can respect a quick flip approach on his cards, but I also don’t mind a wait-and-see approach either. If Davis excels in his expanded role, you might be able to maximize your profits by holding them for a couple of weeks before selling. A PSA 10 National Treasures Rookie Patch Auto /20 sold on 9/21 for a “best offer” of $65. Not a terrible return if you were holding on to this card that previously had very little interest in the market.

THE SCOOP: Quite simply, this game was all about Jonathan Taylor. Hines provided one touch and wasn’t a factor in the game plan. In fact, third string RB Jordan Wilkins was second amongst the Colts’ running backs with nine touches on the day. Keep Hines on your bench for now.

UPNXT: vs. Jets. We can’t suggest playing Hines until we know if week two was an anomaly, or a sign of things to come.

THE SCOOP: Another week, another game where Goedert topped incumbent TE1 Zach Ertz for targets. While you love to see Goedert finish second among Eagles’ receivers in targets, you wish more of those opportunities were converted into big plays.

UPNXT: vs. Bengals. In what feels like a must win for Philly, expect more of the same from Goedert. If Wentz can improve his shaky play, Goedert is sure to much better days ahead. He’s worthy of a start as a TE1 based on matchup and volume in week three.

THE SCOOP: Miller is an example of a good WR being held back by bad QB play. In contrast to week one, Trubisky played well in the first half, but failed to put together any scoring drives in the second half. Trubisky connected on passes to a whopping 12 different receivers Sunday. The Bears got the win, but they might consider a change at QB if Trubisky continues to struggle.

UPNXT: @ Falcons. I expect the Falcons to play with extra motivation after losing a game they should’ve won versus the Cowboys. The Falcons’ defense is allowing a whopping 39 points per game on average, so this makes for a fantastic bounce back spot for Miller. We say start him, knowing there is some risk of subpar QB play.