If you’re an avid football fan, you might have asked yourself at some point: which NFL team has the most Super Bowl wins? After all, some teams have had more success on the gridiron than others; and championship runs can be hard to come by. When it comes to most Super Bowl wins, the New England Patriots and Pittsburgh Steelers are tied for the most in history, each hoisting the Lombardi Trophy six times.

Point to the classic single-elimination format of the playoffs as a reason why so many different teams have won NFL Super Bowls, thus, why we haven’t seen dynasties the rate at which we’ve seen in the likes of the NBA or NHL.

After the Super Bowl era started in 1966, we’ve seen a total of 20 different teams win the big game; combined with endless chip-and-dip get-togethers. I had the pleasure of listing the 10 teams with the most Super Bowl wins in NFL history. 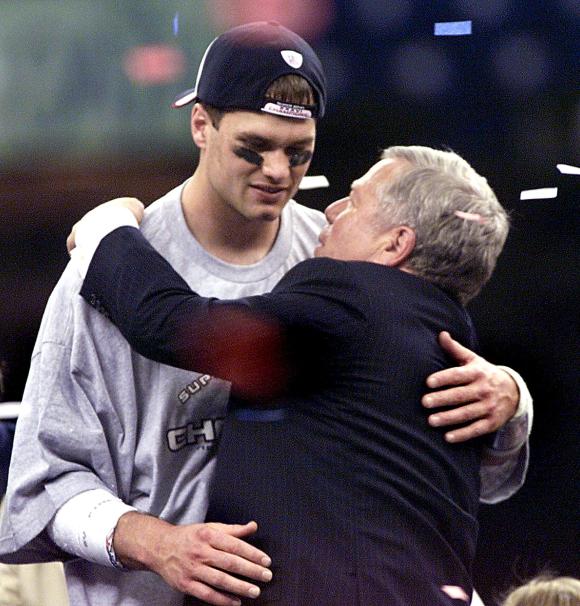 Over the last two decades, the New England Patriots have been incredibly dominant and vastly hated by opposing fans. At the start of 2002 though, the Patriots had zero Super Bowl championships and were underdogs, even with head coach Bill Belichick and a young Tom Brady.

That year, however, the Patriots shocked the world in defeating the heavily favored St. Louis Rams, aka, “The Greatest Show of Turf” in Super Bowl XXXVI. Their victory against Kurt Warner and Co. would spark the greatest dynasty run that the NFL has ever seen. They managed a combined record of 28-4 during the seasons they won back-to-back Super Bowls in 2003 and 2004, while going 17 straight seasons with ten wins or more from 2003 to 2019. Even though they lost the 2007 Super Bowl to the New York Giants, they steamrolled the league en route to a 16-0 record in the regular season.

Their latest Super Bowl triumph came in 2018 against the Kansas City Chiefs, but their most impressive Super Bowl win has to be that 25-point comeback against the Atlanta Falcons in 2016. 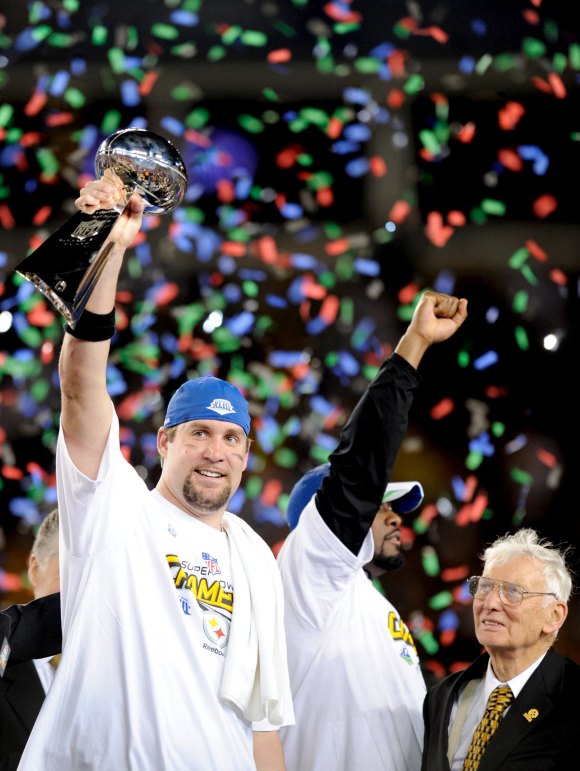 (Photo by Rob Tringali/Sportschrome/Getty Images)
TAMPA, FL – FEBRUARY 01: Quarterback Ben Roethlisberger #7 of the Pittsburgh Steelers holds up the Vince Lombardi Trophy as Mike Tomlin and Dan Rooney look on after defeating the Arizona Cardinals during Super Bowl XLIII on February 1, 2009 at Raymond James Stadium in Tampa, Florida. The Steelers defeated the Cardinals 27-23.

As the 7th oldest franchise in the NFL, the Pittsburgh Steelers are one of the most historic teams in not just football, but in professional sports. Steelers fans had to wait 42 years until the team won their first Super Bowl in 1975.

After that, however, they were able to win four Super Bowls during the next six seasons while putting together arguably the best football team that has ever been assembled. The team was coached by Chuck Noll and featured numerous Hall of Famers including quarterback Terry Bradshaw, cornerback Mel Blount, linebackers Jack Ham and Jack Lambert, and defensive tackle “Mean” Joe Greene.

Their most recent Super Bowl victory came at the expense of the Arizona Cardinals in 2009 and was capped off by a game-winning touchdown pass from Ben Roethlisberger to Santonio Holmes. 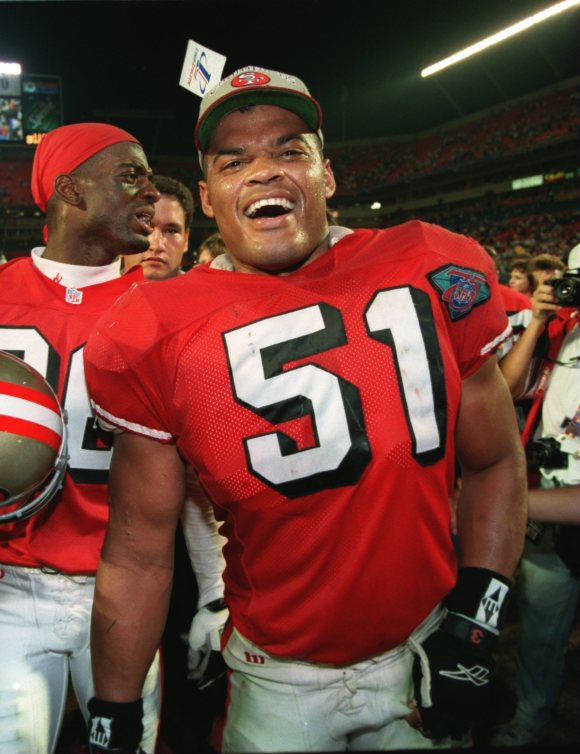 The San Francisco 49ers have featured some of the most legendary players to play in the National Football league. Cornerback Ronnie Lott, quarterbacks Steve Young and Joe Montana, and wide receivers Jerry Rice and Terrell Owens are some of the greatest Niners of all-time. The pinnacle of their success as a franchise started in 1981 when they won their first Super Bowl, and their latest Super Bowl win came in 1994.

Head coach George Seifert won 98 games and led the franchise to two SuperBowls between 1989 and 1996, while Bill Walsh won 92 games and three Super Bowls between 1979 and 1988. For me, their most memorable championship was Super Bowl XXIII in 1989 against the Cincinnati Bengals. Joe Montana threw a game-winning back touchdown pass to receiver John Taylor in that game and is one of the most memorable plays in NFL history. 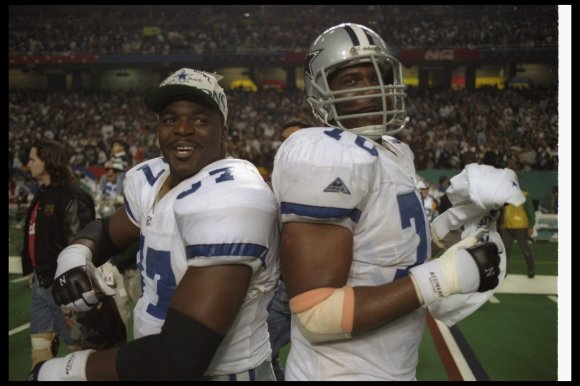 Famously known around the NFL as “America’s Team”, the Dallas Cowboys won their first Super Bowl in 1972 against the Miami Dolphins. Bob Lily’s sack on Dolphins quarterback Bob Griese is one of the greatest plays in Cowboys history and helped clinch Dallas’ first-ever Super Bowl championship.

Their latest Super Bowl win came against the Pittsburgh Steelers in 1996 and capped off Dallas winning three Super Bowls in four seasons during the ’90s. Quarterbacks Roger Staubach and Troy Aikman anchored all of the Cowboys’ Super Bowl triumphs. Other notable Cowboys include Emmitt Smith, Michael Irvin, Jason Witten, and of course their famous president, general manager, and owner since 1989, Jerry Jones. Wade Phillips, Bill Parcells, and Jimmy Johnson are a few notable coaches in Dallas Cowboys history as well. 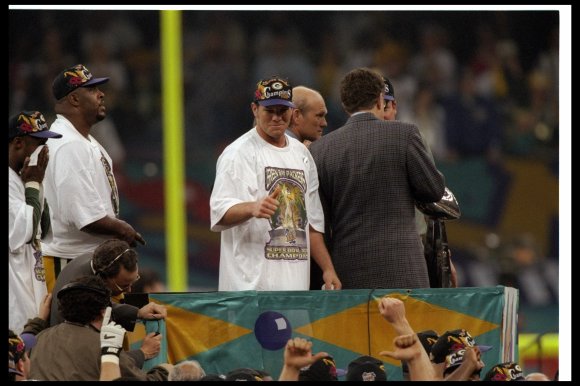 In terms of Super Bowl victories, the Green Bay Packers have four to their name.

However, they’ve won nine pre-Super Bowl NFL titles, more than any other team, that included two runs of three straight NFL titles during the early 1930s and mid-1960s. Hall of fame head coaches Earl Lambeau and Vince Lombardi were the two men at the helm during those eras in helping the Pack win 11 NFL championships. The Packers won the first official Super Bowl during the 1966-1967 season, and then again in 1967. Quarterback Bart Starr was the MVP in both of those victories. 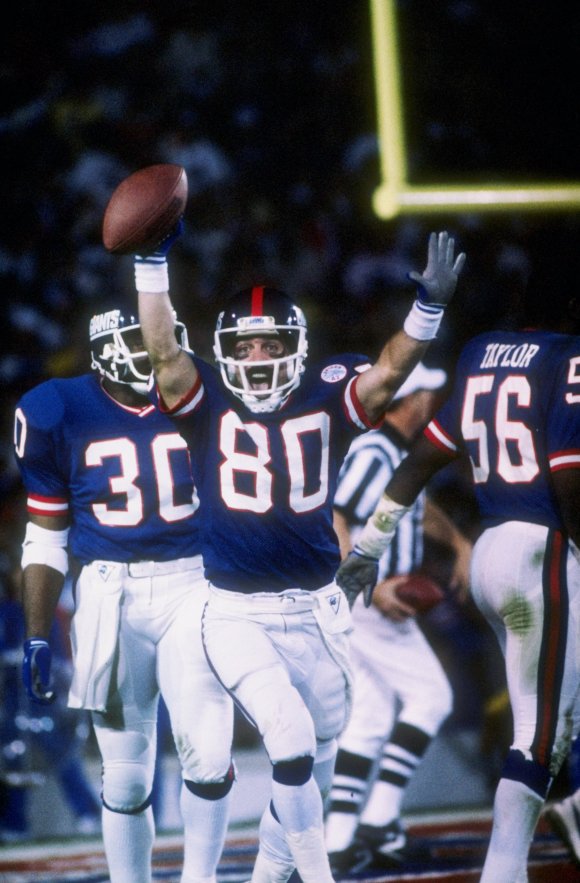 If the New England Patriots were Superman, then the New York Giants were its kryptonite. The Giants famously beat the 16-0 Patriots in 2008 to win their franchise’s third Super Bowl, a game that quarterback Eli Manning would win MVP. Four years later, not only would the same teams meet again, but the Giants would win by the same margin, and Eli would once more win the MVP. Those Giants teams were also led by Michael Strahan, Antonio Pierce, Justin Tuck, Plaxico Burress, and Jeremey Shockey. Wide receiver David Tyree is responsible for the famous helmet catch during the 4th quarter of Super Bowl XLII that extended the Giant’s game-winning drive.

The Giants’ first Super Bowl win came during 1987 in a victory over the Denver Broncos. The team was led by Hall of Fame head coach Bill Parcells, and quarterback Phill Simms, who won the MVP award. 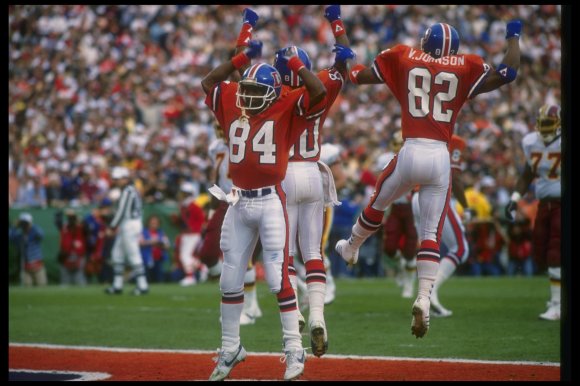 The Denver Broncos are next on the list with three Super Bowl wins during the Super Bowl era, including back-to-back triumphs in 1998 and 1999. Those Broncos teams were absolutely loaded with Hall of Fame talent that including quarterback John Elway, running back Terrell Davis, wide receiver Ed McCaffrey, and tight-end Shannon Sharpe.

In 2016, the Broncos would be on top of the pro football mountain once more after they’d defeated the Carolina Panthers for their franchise’s third Super Bowl. The Broncos were led by one of the greatest quarterbacks of all time in Peyton Manning, and Linebacker Von Miller, who won MVP of Super Bowl 50 in 2016. 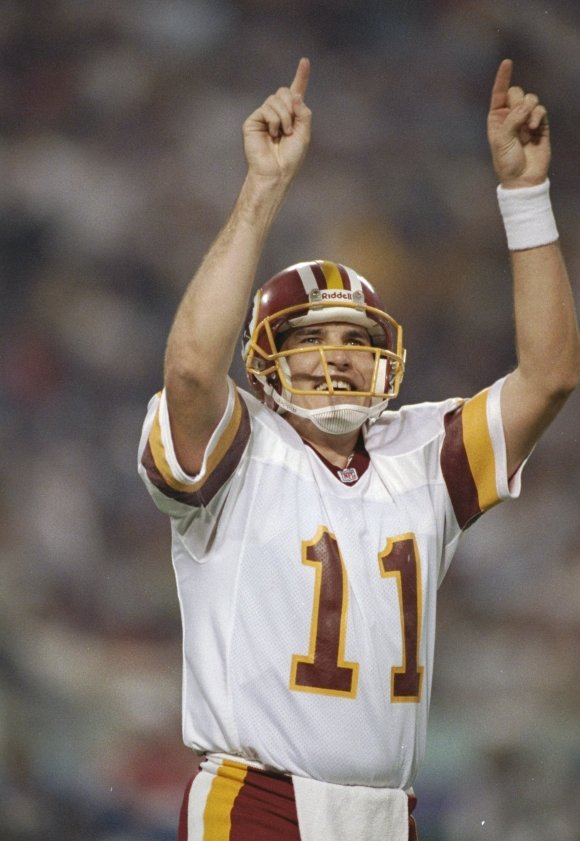 Getty Images
26 Jan 1992: Quarterback Mark Rypien of the Washington Redskins celebrates during Super Bowl XXVI against the Buffalo Bills at the Hubert H. Humphrey Metrodome in Minneapolis, Minnesota. The Reskins won the game, 37-24. Rypien was named the game”s MVP.

Oddly enough, each of those teams was led by different quarterbacks: Joe Theismann, Doug Williams, and Mark Rypien. Other notable players include running back John Riggins, cornerback Darrell Green, and wide-receiver Art Monk. 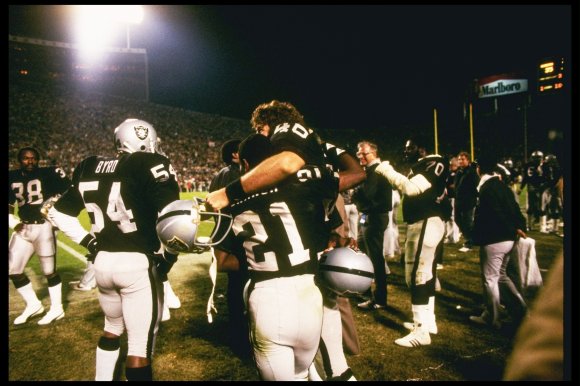 During the Super Bowl era, the Raiders reigned supreme in the NFL for the first time in 1977. That team had an all-world front office in coaching staff led by General manager Al Davis and Head Coach John Madden. Wide Receiver Fred Biletnikoff won Super Bowl MVP and highlighted a team that was also led by offensive linemen Gene Upshaw, Art Shell, and quarterback Ken Stabler.

Their latest Super Bowl success would happen in 1984. While the franchise would be under the same ownership in Al Davis, Tom Flores took over the head coaching helm from John Madden. Those teams had a mean defense anchored by defensive ends Howie Long and Greg Townsend who would combine for 23.5 sacks during that season. 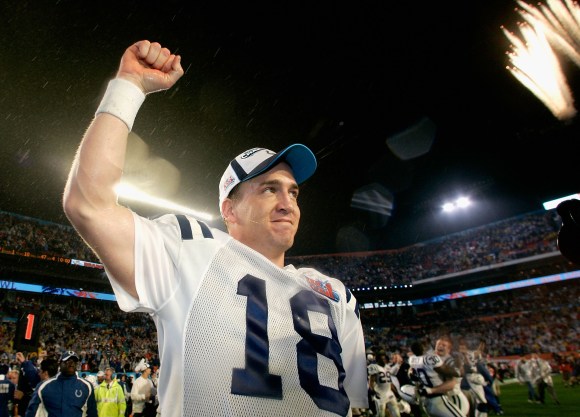 Rounding out this list are the Indianapolis Colts, having won two Super Bowls in franchise history, as well as two pre-Super Bowl era NFL championships. The first came in a three-point victory over the Dallas Cowboys in 1971, while their latest Super Bowl win would come 36 years later in a 12-point victory over the Chicago Bears. Known as the Baltimore Colts in 1971, the Colts were a team that was led by linebacker Chuck Howley, tight-end John Mackey, and quarterback Johnny Unitas.

Quarterback Peyton Manning led his Colts to a 29-17 Super Bowl win over the Bears in 2007, while winning the game’s MVP award as well. He was helped by wide receivers Marvin Harrison and Reggie Wayne, tight-end Dallas Clark, offensive lineman Jeff Saturday, and head coach Tony Dungy.