As the Dunk craze reaches a fever pitch and Nike seemingly releases a new pair every week, footwear enthusiasts such as myself have begun to ask: Are you done? Immense saturation of popular models doesn’t just ruin the sensation of exclusivity, but it begins to force consumers to confront their greatest fear. We need to stop buying, and we know it.

For some, footwear is a means of self expression, a culture, and a lifestyle, kept on custom built shelves or boxes in pristine condition. For others, shoes simply get them comfortably from point A to B. Most probably fall somewhere in the middle. Regardless, shoes are meant to be worn, and they do get worn. Unfortunately, the days of resoling shoes for longevity are for the most part over, and modern shoes offer very few redeemable qualities with regards to their end-of-life.

But what if it didn’t have to be this way? The age old proverb we’ve all heard a million times teaches us that necessity is the mother of invention, and this rings true frequently within the realm of footwear. The current state of the world requires that we design shoes that minimize their impact on the environment, and designers have answered the call.

Enter 3D printing, a technology which has made massive leaps and bounds since its inception. 3D printing, also known as additive manufacturing, works by constructing a three dimensional object from a computer aided design model (abbreviated as CAD). These 3D models were initially only considered usable for rapid prototyping, but modern technology has made additive machinery so precise that entire products can be 3D printed of a high enough quality to be sold.

Adidas has been experimenting with 3D printed soles for several years now, and have reached a point where their Futurecraft 4D line is available for sale. 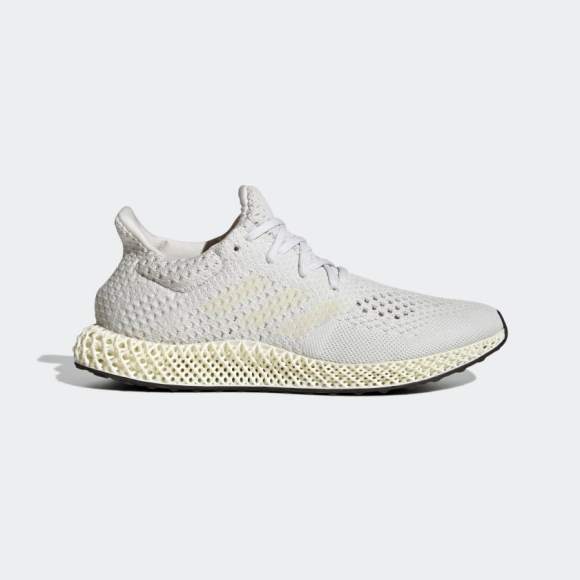 Others are pushing the boundaries even further, and printing entire shoes, rather than just the soles. The improvements in 3D technology present an entirely new manufacturing process that flips the current method on its head. Previously one would have to pay thousands for molds and samples, making shoe design a gamble and extremely risky. Companies can now design a model, print it on location, and prototype rapidly with much lower cost. Zixiong Wei, an independent designer under the name SCRY, has begun to sell a line of their own 3D printed shoes. Such a degree of independent innovation and production would otherwise be impossible if not for the relative accessibility of 3D printing.

Brooklyn-based engineering company Zellerfeld has been pushing the boundaries of what 3D printing can be capable of. Their proprietary machinery allows the company to essentially weave plastics into a breathable textile, allowing them to construct the whole shoe out of a single material in one print. The company recently partnered with designer Heron Preston to release the HERON01 shoe, which looks as though it came straight out of a science fiction novel. The shoes are made out of TPU, a thermoplastic that is completely recyclable, as it can be shredded and melted to create new shoes once worn. Furthermore, Zellerfeld also allows consumers to scan their feet with an iPhone to create a custom shoe that fits an individual’s foot perfectly at no extra cost. The company also plans to make shoes using recycled plastics such as water bottles to create a completely circular lifecycle for the shoes.

In a matter of time, facilities will be able to ramp up production and outperform sweatshops, creating a practice that is both efficient and ethical. Given that 3D printers can be installed anywhere, this also allows companies to produce goods much closer to their final destination, cutting down on the environmental and financial costs of shipping. Zellerfeld and others are pioneering manufacturing processes which will inevitably lead to a future in which our footwear is printed.