Summer is right around the corner and  Father’s Day will be here before you know it, so now is the time to really get a move on your new summer pickups. Whether you are shopping for yourself or a handsome fella in your life, atmos and Cole Haan have you covered with their new  ØriginalGrand collaboration that drops tomorrow. Ten years ago, Cole Haan disrupted the office dress code by combining the sophistication of a dress shoe with the presence of a sneaker, and now 20 years later they have become an authority in sneaker culture after numerous collaborations over the years.

The ØriginalGrand has been the foundation for Cole Haan sneaker heads, establishing itself as the go-to silhouette for any occasion. This collection includes two colorways by the name of “Instinct” and “Logic” “Instinct” features a leather upper in a multi-animal print, atop an atmos Blue rubber outsole.

Other details include an embossed atmos-branded heel hit, and an additional pack of atmos Blue laces.  The “Logic” colorway harkens back to the heritage of the shoe, reminiscent of the original colorway, but updated with a sublimated animal print. The wingtip is finished with a pop of color with a Spark-colored rubber outsole sole to match the embossed atmos-branded heel hit, including an alternative Spark-colored lace set.

Ahead of the release, we spoke with the Cole Haan and atmos team to hear their thoughts on the new collaboration. 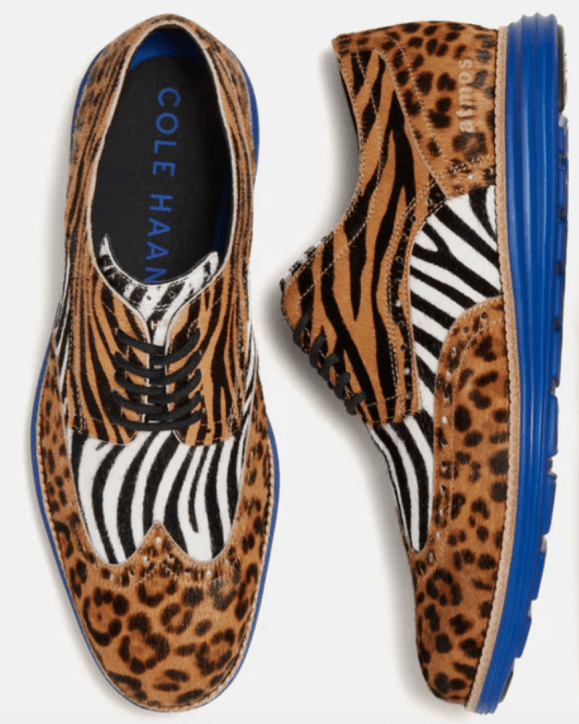 ONE37pm: Congratulations on the 10th anniversary of ØriginalGrand! The colorway designs are awesome. What was the inspiration behind the designs of both?

Cole Haan: Ten years ago, Cole Haan defied convention, pioneering an innovative, hybrid silhouette that combined a traditional dress upper and athletic outsole, held together by a unique leather welt.  Inspired by the weightless movement astronauts achieved in space, the ØriginalGrand wingtip signified one giant leap in ingenuity in craftsmanship and design.

Now, the special-edition Cole Haan x atmos collection further reimagines the beloved ØriginalGrand oxford through the use of new materials, fabrications, and colors, which pay homage to atmos’ rich heritage within the sneaker community. The latest two new styles meld Cole Haan’s superior performance and comfort with atmos’ fashion forward and vibrant designs for the businessman or streetwear fanatic alike.

ONE37pm: Cole Haan has provided timeless looks for decades. How does it feel to still be on top 90 years in?

Cole Haan: From the beginning of the brand’s history, Cole Haan has always been on a mission to innovate with the performance lifestyle of our consumers in mind. We’ve never rested on our laurels—constantly disrupting the status quo and pushing boundaries. We have been redefining footwear for nearly a century and we’ve always sought to bring innovative product solutions to our consumers and adapt to our always changing world.

We have always strived to put comfort first, without ever sacrificing craft or style which is why in honor of the ten-year anniversary, we set out to create a version of the iconic shoe that spoke to the rise of the modern workplace and streetwear.

ONE37pm: How about working with atmos? How has that process been?

Cole Haan: Working with an iconic brand like Atmos was a truly special experience. Their respect and love for Cole Haan and the ØriginalGrand was clear from the first concept review and grounded this project in authenticity for both brands. They were collaborative, creative, and communicative despite the fact that we’ve only met virtually!

The most rewarding part of the process was sharing the first round of prototypes; we sampled four different concepts and multiple packaging designs. As we reviewed the samples subsequently planned for the launch, the mutual respect and understanding each partner had of the other’s heritage, history, and vision made the final concept selection and creative build easy. The project just felt honest, and that’s what matters most.

ONE37pm: What else can we expect this summer? Anything on the horizon?

Cole Haan: Throughout this Spring and Summer season, Cole Haan will be unveiling new product lines that continue to push boundaries with future familiar products in sports and leisure, celebrating the spirit of sport and the company of friends. Cole Haan our offering through its new performance styles for golf, tennis, and boating. We’ve also got several upcoming collaborations in our ‘Ten years of defying convention’ ØriginalGrand programming throughout the next year. Be on the lookout! 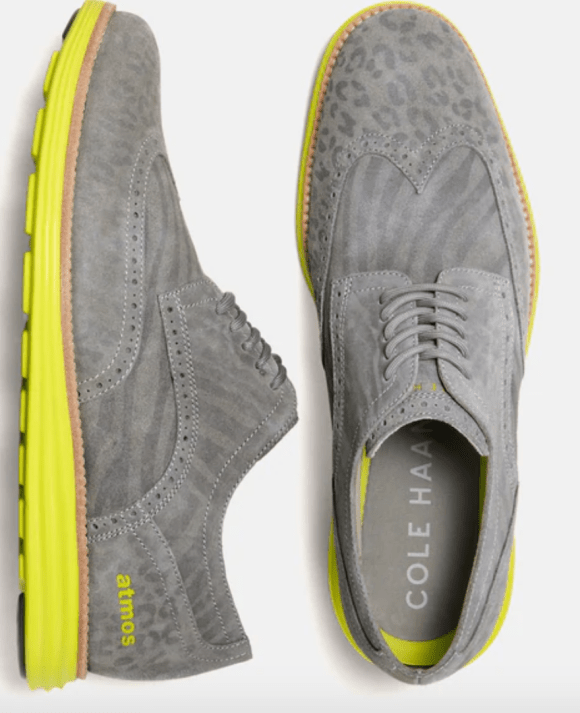 ONE37pm: Congrats on teaming up with Cole Haan! How has this process been of working with them?

Bumgarner: It was incredibly natural & exciting to work with such a historic brand. Their teams all put their full effort & time behind this project, allowing us to explore & were fully collaborative through multiple sample explorations & our activation plans around the footwear launch.

ONE37pm: The colorways are very unique. How did the design concept come to be?

Bumgarner: Early last year we began with the project brief of this being the 10-year anniversary of the OriginalGrand. We wanted to work through how to best celebrate this moment with Cole Haan, while also leaving our mark on this iconic silhouette. With the “Logic” colorway (grey/spark) we saw this as a moment to pay homage to that first OriginalGrand colorway that took the market by storm while applying a light atmos touch through the tonal animal print.

For the “Instinct” colorway (animal/atmos blue), this was the true expression of the atmos brand on the OriginalGrand, tapping into our own collaborative heritage & owning the “atmos blue” outsole color pop, iconic to the shoe.

Bumgarner: atmos started with humble beginnings in 2000, with a small footprint storefront selling vintage sneakers in Harajuku, Tokyo. Since then, we’ve blossomed into a global streetwear and sneaker boutique known for steadily creating grails over the last two decades.

ONE37pm: Anything else on the horizon for SS22?

Bumgarner: We have a stacked calendar of incredible collaborations, brand partnerships & community events throughout the year, along with an exciting NFT project that is close to launching in the coming weeks.

You can continue to keep up with both Cole Haan and atmos via their official websites.