Get your tracksuits ready, because this is the summer of soccer. Anyone who’s closely watched the fashion world knows that slender indoor soccer shoes like the Samba are having a moment, and designers like Wales Bonner are making waves reimagining garments like the tracksuit. Now, this may come as no surprise to our international audience, where soccer and its influence are undefeated, but here in the United States it’s a new element to the fashion lexicon. As the genre continues to rise to prominence, the term being tossed around for the football-inspired look is “blokecore.”

Along with the World Cup adding an obvious air of soccer-centric excitement this year, it seems as though fashion minded folk are looking to the sport for style inspiration more than ever. Like many of today’s trends, however, the current wave of soccer influenced fashion seems almost like a product of convergent evolution.

It’s no secret that rave is cool right now, from the most cutting edge producers modernizing the classic sounds of the noughties to the distinctly y2k influenced Balenciaga collections of late. While typically associated with the dark and brooding looks that populated the industrial scene, the rave scene was much larger and more diverse. Britain’s working class youths danced in warehouses across the country to booming mixes of jungle and drum and bass, often wearing their favorite Adidas track jackets paired with designer clothing items and a pair of Superstars. Hence the emerging name, blokecore.

The fashion sensibilities of these characters has been showcased by designers like Martine Rose, who have expressly noted the rave scene as inspirations. Similarly, designers like Gosha Rubchinskiy made the style popular for a brief moment at the height of its popularity in the late 2010’s. The style is often dubbed “chav chic”, a term that we stray away from due to the derogatory origins of the word.

Aside from these cultural cues, blokecore is in many ways the spiritual successor of the U.K.’s most famous footballer subculture: the casuals. Emerging in the 70’s, casual culture became the umbrella term for the space that allowed young working class boys their first foray into the world of fashion. During this time, interest in designer clothing clashed with traditional notions of masculinity, and casual culture became a hotbed for youthful rebellion.

Casual culture’s inception is most frequently attributed to devout Liverpool fans, who channeled their hooliganism through tribalism and camaraderie. The result was a style that served almost as a uniform, informing others of one’s beliefs and alliances in almost an instant.

Common brands from this era included Stone Island, C.P. Company, Lacoste, and many more. By the 80’s casual culture was a dominant subculture, and the rambunctious notoriety of its followers was followed by the popularity of the brands they donned. Casual culture maintained its popularity for quite some time, but by the turn of the millennium its popularity waned and new subcultures came to the forefront.

Despite its obvious historical connection, modern blokecore bears little resemblance to casual culture. Brand allegiance is less dominant, and the only mainstay from the bygone era is a required pair of adidas trainers. 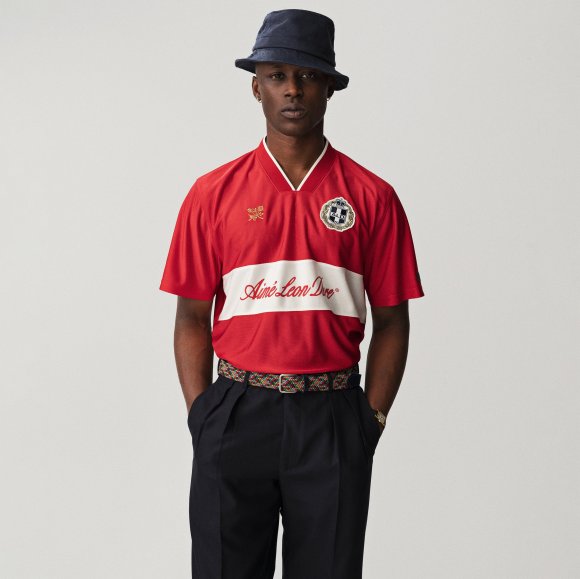 On the other end of the spectrum, footballer fashion and blokecore have infiltrated the luxury market from a different angle. The new wave of prep, which combines the best of streetwear and old money into a sort of neo-trad bro style, has taken cues from the soccer world as of late. Aimé Leon Dore, for example, has recently featured their take on a soccer jersey as part of their Spring/Summer 2022 collection. Wales Bonner has added a bit of that timeless 70’s flair that people love right now, creating beautifully patterned track jackets with a retro fit as well as collaborating with Adidas in elevating their classic tracksuits. Her shoe collaborations have also taken off, with her sleek takes on models like the Samba and Japan model fetching significant prices on the resell market.

Now, we can see celebrities like Bella Hadid incorporating these elements into their personal styles, subtly hinting at the sportswear influence without letting it dominate an outfit. Along with the baggy pants and outdoor garb all over the streets lately, we can only hope that comfort-forward trends like the aptly named “blokecore” will stick around for some time.