Yesterday, one of the music industry’s most mysterious men revealed one of his deepest secrets, answering the question on everyone’s dry, cat’s asshole lips: How does Frank Ocean keep that skin so soft? Ocean, basically a Lush employee for genderqueer millennials, covered GQ and revealed, in rather uncertain terms, how he cares for his skin. This is how he described his routine:

“I really do believe in a night cream. I feel like men just go to sleep. They may wash their face or they don’t even bother—they go to sleep with the day face on. You really need to do a gentle wash and put a night moisturizer on. You can’t have the retinol in your creams in the day because it makes you more sun-sensitive, so you wanna throw that on at night. I need the night cream because when I wake up I feel very beautiful, moisturized and ready to have people making eye contact with me, ready to look above my eyebrow, below the eyebrow. [laughs] That’s the life hack right there. It’s been all these years, and Pharrell still hasn’t given us the keys yet. He just says ‘exfoliate,’ but it’s not just ‘exfoliate’: We need more keys.”

In the grooming sphere, Ocean’s admission was revelatory. Believe it or not, there are still men who don’t even wash their damn face (!). His interview became a thread on Reddit’s /r/skincareaddition (which is worth perusing if you have no idea where to start with your own skincare), and was dissected all over Twitter.

Ocean later clarified on his Instagram story that he forgot one very important part of his routine, at the urging of his mother, Katonya Breaux, who herself is the founder of UnSun Cosmetics. 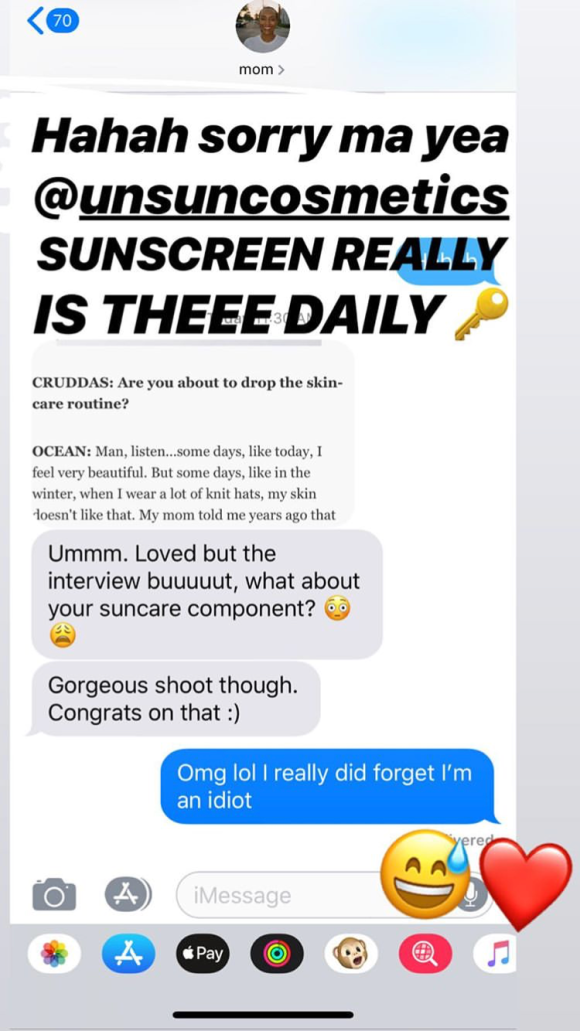 OK, so the general takeaways are:

With that in mind, let us work the cogs of the mind to imagine what the hell Ocean could be using. It can be generally overwhelming walking into a pharmacy or beauty store where there are more options than a buffet at Golden Corral. 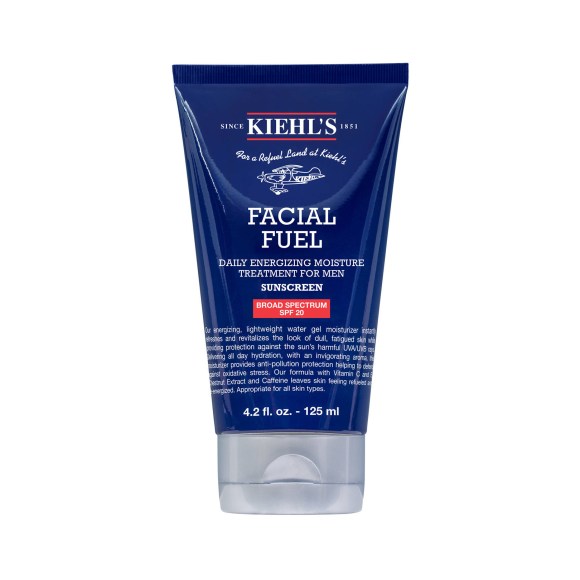 Sunscreen is the best thing you can ever do for your skin. It’s the reason Pharrell looks forever 21 at 45. Harmful UV rays lead to premature aging and blocking them out—even when it isn’t sunny—is extremely important. The easiest way to do this is by using a daily moisturizer with SPF baked into it. Kiehl‘s Facial Fuel with SPF is enriched with vitamins C and E, chestnut extract and soy and won’t leave you feeling oily. 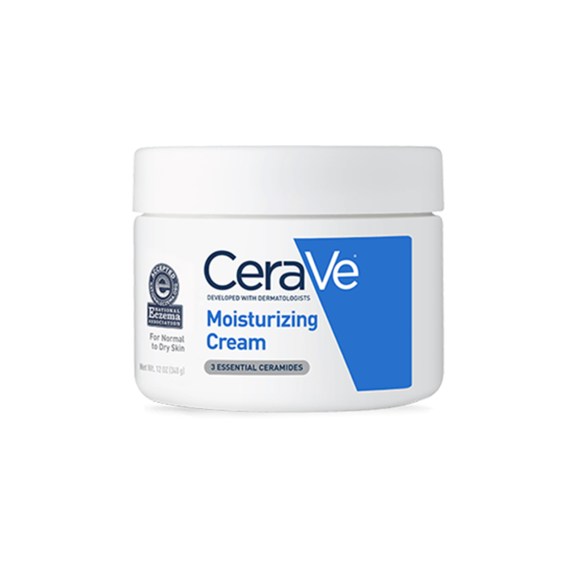 There are plenty of moisturizing creams you can use at night that are effective and fancy, but none do the trick quite like CeraVe Moisturizing Cream, which comes in a tub and is available at nearly every CVS or Wal-Mart the country over. It’s like $15, or you can buy the tub with the pump. One pump will do ya. It’s slightly heavier so put this on after washing your face and before you go to bed. 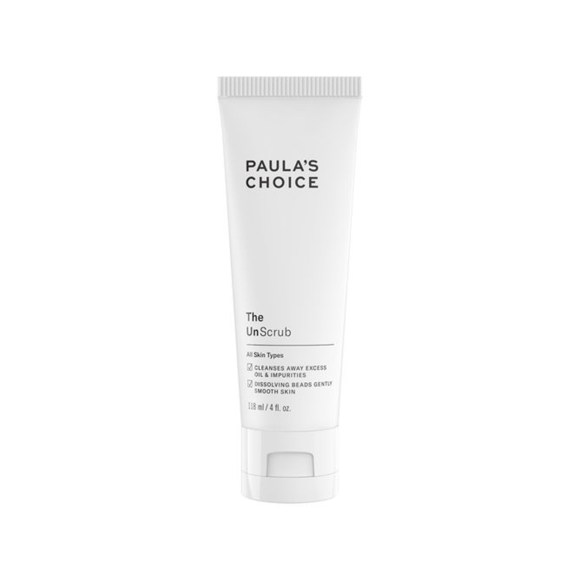 Paula’s Choice is the best brand you’ve never heard of. It’s fairly inexpensive and its science-backed, cruelty-free products have been hailed as a godsend for people who have tried them (like moi). They are great for sensitive, acne-prone skin.

There are two types of exfoliants: Chemical and physical. Chemical exfoliants are better for your skin but sometimes you just feel like ripping off that top derma layer the old-fashioned way. However, physical exfoliants can be harmful and a lot of people think that St. Ives apricot scrub is the way to go when it’s essentially ground up walnut shells with sharp edges that result in micro-tears in your skin, which can lead to broken capillaries. There was even a lawsuit. Yikes!

Scrubs with jojoba beads are the way to go. Jojoba beads are smooth, round and biodegradable. What are they exactly? “Jojoba oil is a liquid wax derived from the jojoba shrub. The wax is processed to a solid wax, which is referred to as a jojoba ester. These jojoba esters are jojoba beads!”

The Unscrub by Paula’s Choice uses jojoba beads to gently remove dead skin cells and leave your skin looking fresh to death. I would use a physical exfoliator no more than one to two times a week to ensure your skin isn’t irritated.

Buy Now
https://www.paulaschoice.com/the-unscrub/740.html
The Retinol: The Ordinary Retinol 0.2% in Squalane 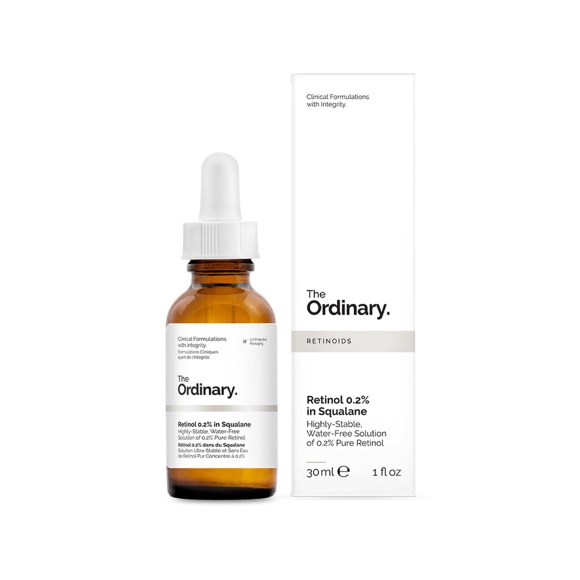 The Ordinary is a fairly new brand that you may have seen advertised on the subway. Retinol is a chemical exfoliant and can be used daily, but make sure to start out with a really low dose to see how your skin reacts. You apply this with a cotton ball or cotton pad. Two drops should be enough. Use this after washing your face but before you moisturize. As per Frank, do not use retinol in the day, as it makes your skin more susceptible to sun damage.